Everything You Need to Know About Pistol Concealment

Self defense requires more than just a gun, it requires a mindset to always be prepared, along with knowledge of laws.

To make a long story short, I was born into an armed household in 1948. I started carrying a gun when working part-time in my dad’s store in 1960 and have carried since. To save newcomers to the armed lifestyle from the risky practice of reinventing the wheel, I offer this advice about pistol concealment.

You have brought a deadly weapon into your home. You might never have to point it at another living thing or perhaps unleash its deadly force against a living thing to save your life or that of someone for whose safety you are responsible. But you will be loading it, unloading it, checking it, cleaning it and performing other tasks in the presence of the people you love most—the people you bought it to protect. Thus, safety must always come first and foremost in regard to pistols and pistol concealment.

Also, many in the firearms industry now add a fifth rule: You are responsible for keeping your weapons secure from unauthorized hands.

Know The Law For Pistol Concealment

You might’ve heard the phrase “Better judged by 12 than carried by six.” I’ve been guilty of uttering it. But in the best of all worlds, you will escape unscathed from 12 jurors as well as the six pallbearers. Certainly, there’s no appeal from the grave and no reversal from the paraplegic’s wheelchair. But, spending the rest of your life in a penitentiary because of a mistake with a gun isn’t a victory.

Wherever you are, you can find instructors who teach classes that cover the laws relating to the judicious, justifiable use of lethal force in self-defense, as well as pistol concealment. Your local gun shop should be able to steer you to such a class. On the national level, two instructors I know teach this topic in depth and travel across the country doing so: Andrew Branca and myself. Additionally, Branca and I have written books on the topic—Law of Self Defense and Deadly Force, respectively. Both are available on Amazon and can probably be acquired at your local library.

Knowing how to shoot is just as important as knowing when to shoot. Again, your local gun shop can steer you to defensive shooting instructors who will save you years of trial and error by distilling their knowledge.

It’s not TV, where the blank goes bang and the bad guy swoons to the ground or goes flying. There have been gunfights in which good guys had to put 30 or more bullets into the raging bad guy to put him down. A homicidal human standing 6 feet tall is not a 6-foot target in terms of placing a shot that will render him incapable of pulling his own trigger. His brain isn’t an easy target. His heart is about the size of his clenched fist. And his spinal cord is no thicker than his little finger. Manipulating the remote-control drill that is your firearm—at high speed, when you might be ducking and weaving to avoid his gun muzzle or his slashing knife, with your heart pounding like a jackhammer—simply won’t be as easy as TV and movie screens make it look.

I’ve been a firearms instructor since 1972, and I wince when I hear people say, “Shooting is a perishable skill.” I don’t think that’s the right word. After you learn it, the skill doesn’t die—but it is corrosion prone. Prevent that corrosion by polishing your skills constantly, as often as you can.

An experienced driver might be able to drive out of perceived danger more effectively with  sports car than with a sedan. However, a new driver can easily oversteer and spin out because of the sports car’s sensitive steering. Or he could accelerate faster than their reaction time in the powerful vehicle. Similarly, a light target pistol trigger is too easy for a new shooter to touch off prematurely, causing an un-healable tragedy on one end of the gun and perhaps creating a prison sentence or adverse lawsuit verdict on the other. 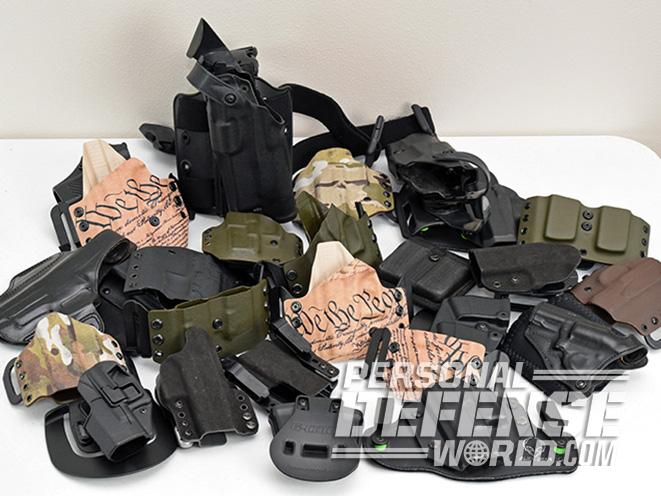 A Comprehensive Guide to Buying the Right Concealment Holster

A new shooter is unlikely to go wrong with a pistol with a standard (factory spec) duty-type trigger pull. Something the police carry—a Glock or similar striker-fired pistol, or a Sig Sauer, Beretta or similar double-action, hammer-fired pistol—will be more court defensible and less prone to negligent discharges that what a layman would colloquially call a “hair trigger.”

Don’t remove or deactivate safety devices on lethal weapons. It will be hard for you and your lawyer to convince a jury of non-gun people that this was anything other than culpable negligence. Also, don’t decorate your firearm with stupid indicia of malice (as you can expect your accusers to call it in court) such as skulls and crossbones or zombie motifs.

Many of us think a double-action-only revolver might be the best starting point for a new shooter with little time to devote to handgun practice and training. The good news? Revolvers are simpler to load and unload than a semi-automatic pistol, and less dependent on maintenance, lubrication and ammo type. But revolvers offer less cartridge capacity and a longer, heavier trigger pull that’s somewhat more difficult to master. However, when you have caught onto double-action shooting, manipulating any other type of trigger will be a piece of cake.

People who routinely carry handguns in public are fond of saying, “Concealed means concealed.” However, it’s not so obvious as it sounds. The public, accustomed to seeing handguns worn only by police and security professionals, become understandably alarmed when they see one on the hip of someone they can’t identify. This can result in an embarrassing police response to a “man with a gun” call. Some anti-gun people have stated on the internet that if they see an ordinary citizen with a visible gun, they’re going to ambush him and take his gun away—and more than one has attempted that. Showoff bullies, drunks and genuine thugs might see a gun they can snatch, and that has happened, too. There have even been cases of someone who spots a handgun falsely accusing the wearer of threatening them with it.

Carry your gun in a well-made holster that holds it close to the body. Also, recognize that you might need to alter your wardrobe to accommodate concealed carry. Inside-the-waistband holsters require waistbands about 2 inches larger than normal for daily comfort. Side-vent sport coats tend to expose hip-holstered guns; center vents don’t. If you carry a full-sized (service-sized) pistol, you might want jackets one size larger than normal. A gun that bulges in skinny jeans will conceal much better in relaxed-fit pants, Dockers, slacks and cargo pants.

In the same vein, the fewer people who know you keep or carry a gun, the better. Gun control is one of the most antagonistic debates in America. In fact, many gun owners have suffered social ostracism for themselves and their families, and even negative occupational impact when it became known they legally carried a firearm.

Safety, responsibility, knowledge, skill, constant alertness and discretion are cornerstones of the practice of lawful pistol concealment to protect yourself and your family.