There is no more iconic name in firearms than Beretta. In 1985, the Beretta 92FS was adopted as the service pistol for the United States military. Designated the M9, the Beretta served until it was replaced, in 2017, by the SIG M17. 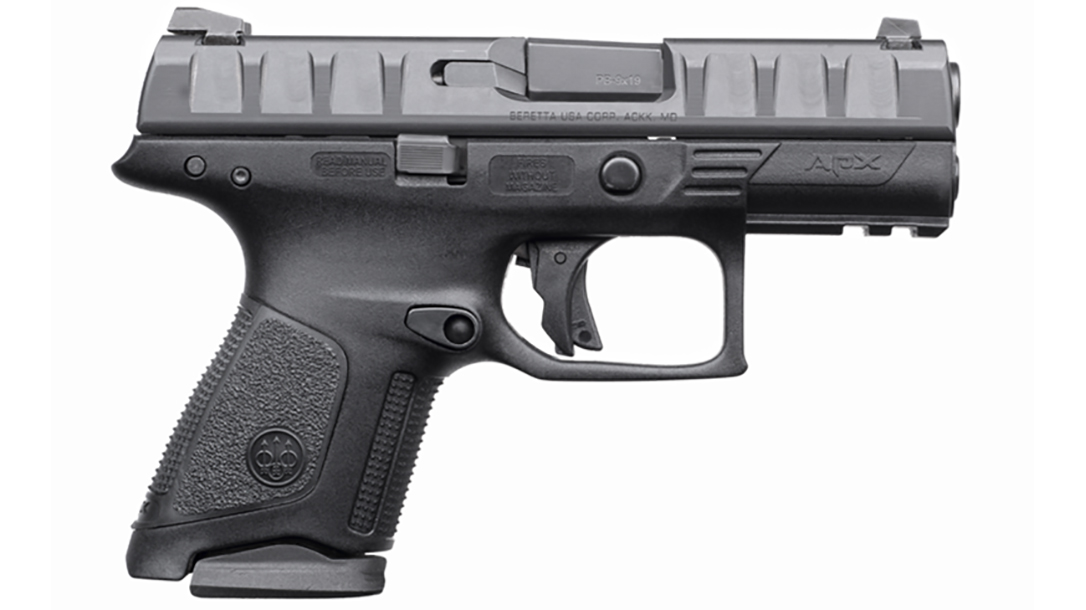 The new Beretta APX pistol is a polymer-framed, striker-fired pistol influenced by the Modular Handgun System program. At the recent 2018 Athlon Outdoors Rendezvous, I had the opportunity to shoot the new APX Centurion and the APX Compact.

The APX series of pistols is designed around an internal Fire Control Group that is the serial numbered part. Operating controls are conventional in nature with a trigger safety, an ambidextrous slide stop and a reversible magazine release button. The pistol comes with three modular backstraps to adjust the grip size to the individual user.

Unique to the APX pistols is an automatic striker blocker that actually extends out the top of the slide when the pistol is fired. The most striking feature of the APX is the large cocking serrations that extend the entire length of the slide. White, three-dot, sights are standard but Tritium night sights are an option.

Breaking Down the Beretta APX

The APX has a unique take down process. There is a recessed striker deactivation button located on the right side of the frame, behind the slide stop. This button must be depressed before the take-down lever can be rotated and the slide removed from the frame. The design eliminates the need to pull the trigger prior to disassembly.

In addition, APX pistols can be configured with a thumb safety, loaded chamber indicator and a magazine disconnector safety that prevents the pistol from being fired without a magazine.

Both the 9mm Centurion and the 9mm Compact feature a 3.75-inch barrel. The difference between the two is the size of the frame.

The Centurion is almost the identical size of a Glock 19; the Compact is approximately a half inch taller than a Glock 26.

Beretta textured the front and backstraps on both pistols, which provides a positive gripping surface.

On the range, both pistols ran well with a variety of ammunition. The bore axis of the APX helped with recoil control and the short reset on the trigger made follow-up shots easy.

The short time we had with the APXs did not allow me to obtain any holsters; however, the good news is that Beretta has an extensive line of holsters on its website.

Both pistols are well suited to concealed carry. I tended to gravitate to the Centurion, since my daily carry pistol is a Glock 19. The grip of the Centurion allowed me to obtain a full purchase, and the Centurion pointed well for me right out of the box.

The Compact, being a little shorter, did not fit my hand as well. In addition, with the medium backstrap insert, the Compact tended to point higher than the Centurion.

The Beretta APX is a pistol that is feature rich and ideal for military units, law enforcement agencies and the commercial market. I came away impressed with the features, ergonomics, and the available options.