Earlier in October, Dunn shot and killed a suspected shoplifter. The deceased, Cristobal Lopez, had allegedly tried to steal a hatchet from Dunn’s Vets Army Navy Surplus store. Dunn saw the theft on video surveillance, confronted Lopez and tried to stop him from getting away. 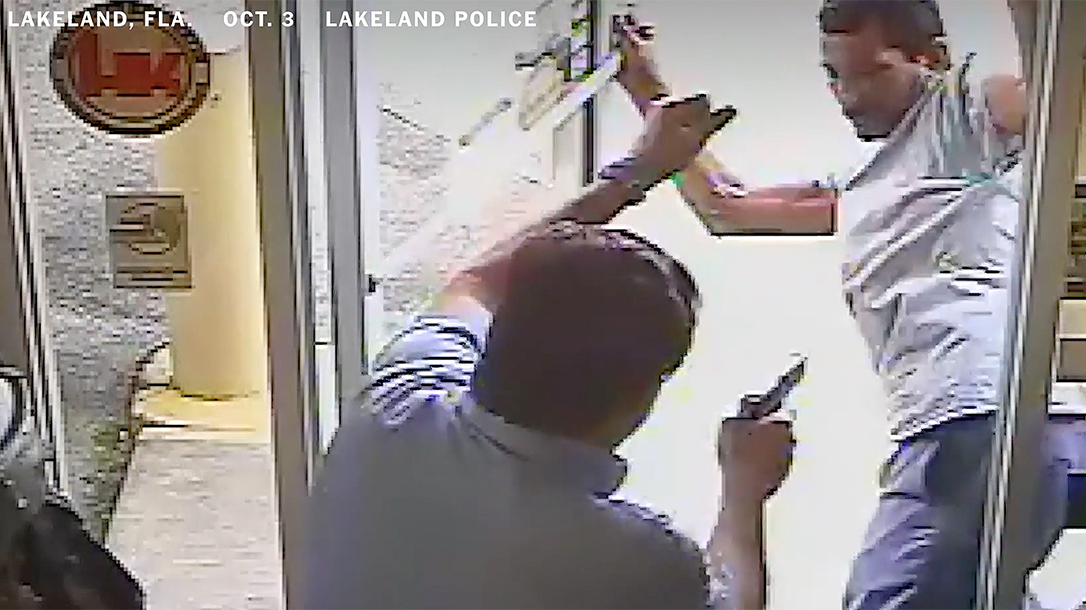 Video of the incident, released by the Polk County Sheriff’s Office, shows Dunn grabbing Lopez’s shirt and eventually shooting him twice. Lopez died outside the store. The video also brought up a lot of questions regarding Dunn’s use of force. Lopez had the hatchet in his hand when Dunn shot him, but at no time made any threatening moves toward Dunn.

Watch the video at the bottom of this post.

After the video was released, people questioned justification of the shooting. Was this self defense under Florida’s “Stand YourGround” law, or was it murder? The state of Florida responded by having Polk County Sheriff’s deputies arrest Dunn on Oct. 19, 2018. They charged Dunn with second-degree murder.

“I have determined in this case, and the actions of Mr. Dunn fall outside the protection of stand your ground law,” said Brian Haas, Florida State Attorney to CBS News.

At this point, the courts will sort out this case. It could take months, or even years, to work through the system. However, a lot of folks probably already have chosen a side in this case.

Unfortunately, the video didn’t contain sound, so it was unknown at the time whether Lopez threatened Dunn verbally. According to the affidavit, Lopez did not. In fact, witness statements claim that Lopez didn’t threaten Dunn physically or verbally; he was simply trying to get away.

Of particular note is that the affidavit mentions that Dunn did not render aid to Lopez. Instead, he keep his gun on the suspected shoplifter until police arrived. Florida does not have a law regarding rendering aid, which is why the teens who watched a man drown last year were not charged with any crime. This might not affect Dunn’s case, but it could point toward a callousness that can’t be helpful.

Dunn is being held without bond in the Polk County Detention Center. If convicted, he faces life in prison. Additionally, there is a mandatory 25-year sentence because of the use of the firearm, if the jury finds him guilty. Dunn will appear before a judge for arraignment on Nov. 6.

When Florida passed its “stand your ground” law in 2005, gun owners rejoiced. However, some considered the law confusing, particularly anti-gunners who prefer to call it a “shoot first” law. Rhetoric has ramped up in recent years because of a few highly publicized shootings, such as the Zimmerman and the handicapped parking space shootings.

This should concern gun owners. Sure, non-justified shootings that hit the news are fairly rare, but many folks don’t know that guns are used more than 2 million times a year in self-defense.

Additionally, video has become prevalent in all walks of life. And often, video can be edited to present a certain viewpoint. In those cases, the truth typically comes out, but it can still be devastating to reputation and livelihood.

Keep that in mind at all times. Stand your ground laws are not a pass for bad decisions in regard to self-defense. Gun owners are responsible for every bullet that leaves their muzzle, and should constantly be aware to prevent the need of drawing a concealed handgun.