4
SHARES
1
VIEWS
Share on FacebookShare on Twitter
Just a few years ago, Honor Defense introduced the Honor Guard 9mm pistol. The company designed everything about this gun for concealed carry. Now, the company is jumping into a new self-defense market with the Honor Defense Ammunition line. 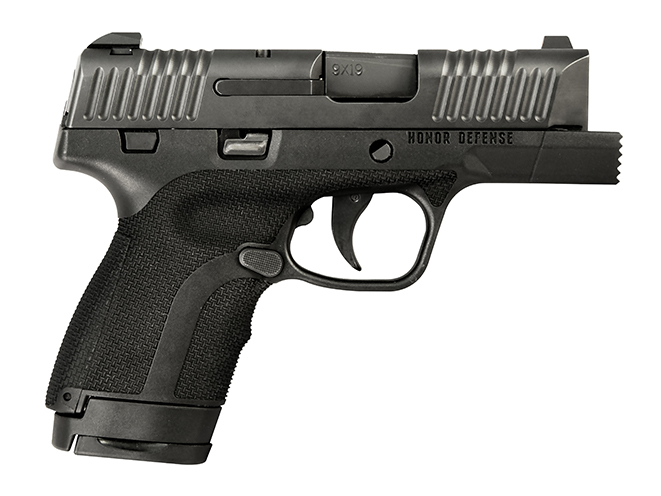 The company used a frangible hollow point to provide maximum terminal behavior in soft tissue. This also reduces the chances ricochet. However, the body of the projectile remains intact for penetration. Additionally, the company drilled the hollow point for accuracy.

In testing, the Honor Defense Self-Defense Ammunition passed most of the FBI protocols. This includes bare gel, light clothing, heavy clothing, wallboard and plywood. In fact, the only protocol it didn’t pass was windshield glass. Of course, since the ammo is frangible, it wasn’t designed to go through glass.

However, the company also used virgin brass, which provides reloaders with an excellent option in four calibers. Shooters will soon find 9mm, .357. Sig, .40 S&W and .45 ACP loads in the new ammunition line. Even better, this self-defense ammunition will be available at a very reasonable price.

“This is a hyper-performance load that costs well below average,” said Gary Ramey, Honor Defense.

As such, this ammunition provides shooters with an affordable option for both training and self-defense. More so, because the company is offering the loads at an affordable price — Ramey claims around $13.99 per 20-round box — shooters can train with their self-defense ammo.

Honor Defense uses veterans to produce its Honor Guard pistols in the U.S. Additionally, all of it parts are sourced using American companies and materials. So, it is no surprise that their new ammunition line is also American made.