Most gun users aren’t the lean and cut operators often seen adorning the pages of magazines. We can’t forget the elderly WWII veteran, for example, or the single mother of two. A sizable number of users don’t have the physical dexterity, for whatever reason, to manipulate the heavy slides on today’s modern fighting pistols. By the same token, there are those who cannot easily manage the overwhelmingly popular 9mm cartridge. Fear not, ye gentle souls. Smith & Wesson has recently introduced the new M&P380 Shield EZ, which just might be the solution to the challenges many gun owners face. 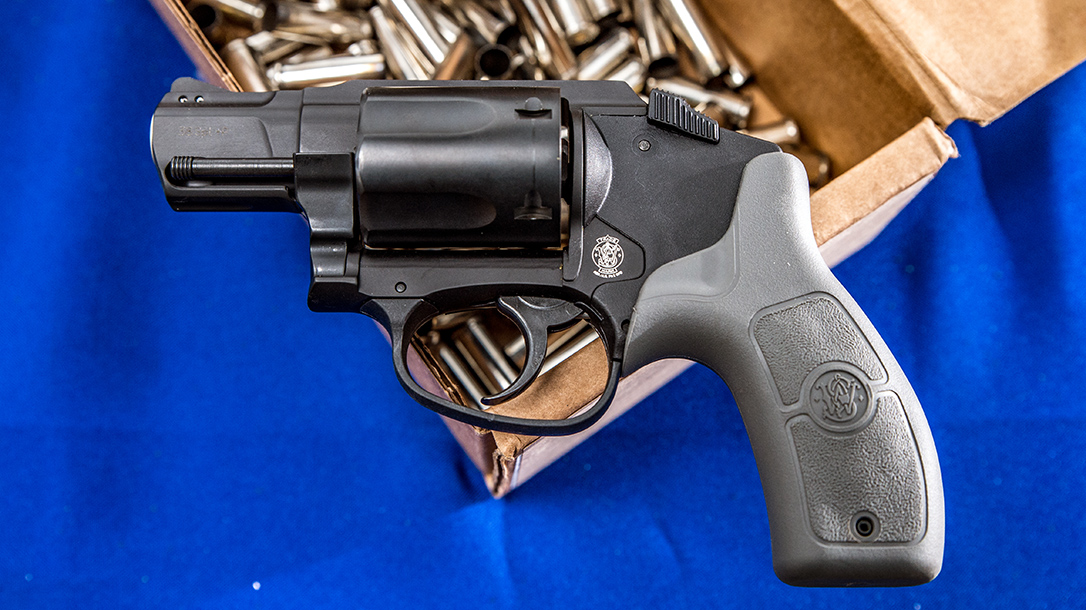 With its appearance modeled after Smith & Wesson’s well-received line of M&P pistols, the M&P380 Shield EZ introduces a couple of new features not found previously in the lineup. First, the M&P M2.0 family now boasts a .380 ACP pistol. Second, this gun incorporates a grip safety not unlike a 1911.

In the past, .380 ACP pistols could be found in standard sizes. However, in today’s market, the offerings tend to be in the micro-compact size range. These models often act as a backup to a primary weapon. Smith & Wesson broke with recent convention, however, and offered up the M&P380 Shield EZ in a package size that places it between the M&P Compact and the standard M&P Shield. This makes it a great candidate for concealed carry. But it is still large enough to provide a good sight radius and a decent capacity.

Despite having a slightly larger footprint than the standard Shield model, with a taller frame and longer barrel and slide, the M&P380 Shield EZ is actually 2-ounces lighter. This gun weighs just 18.5 ounces unloaded. This, of course, is because the EZ fires the lighter .380 ACP cartridge while the standard Shield fires the more powerful 9mm and .40 S&W rounds, requiring beefier components.

Now, the included grip safety is something new for the M&P line. However, it really does make sense for this model. Like the 1911, the EZ will not fire until the grip safety is fully depressed, presumably by the operator’s gripping action. Some enthusiasts and die-hards will eschew this functionality, but remember the target audience for this pistol. The EZ is designed for those who might not be as proficient at operating manual safeties as other gun users. Rather than relying solely on users’ good judgement to keep fingers off the trigger until they are ready to fire, the grip safety provides an extra layer of security.

Also bear in mind that even if they are knowledgeable, those who do not have the hand or finger strength to manipulate a heavier slide may have some trouble with the strength and dexterity required to activate a thumb safety. But for those who insist, Smith & Wesson also makes an EZ model with a thumb safety in addition to the grip safety.

Personally, I think the EZ is the best-looking M&P model of the bunch. There’s something about the scalloped slide that gives the pistol a sleek and sexy look. The slide incorporates rear cocking serrations and front semi-serrations, similar to other M&P models. I never liked the smaller serrations at the front of the M&P slides, as they are difficult to grip and use effectively. Also, they look more like a machining mistake rather than something done with intent.

For a model that is aimed at an audience who requires components that are easy to manipulate, the semi-serrations aren’t very useful and detract from the pistol’s appearance, in my opinion. However, Smith & Wesson makes up for this with the addition of charging supports at the rear of the slide. Though they are not immediately noticeable, they protrude far enough to provide users with enough material to grip and rack the slide more easily than with serrations alone.

The texturing on the EZ’s grip is subtle but sticky enough for a secure purchase on the pistol. It is not as aggressive as the texturing found on the new M&P M2.0 line of pistols, but it still helps the pistol seat quite nicely. As this will probably be a house gun for most users, it won’t be exposed to elements that might require more aggressive texturing.

Overall, the pistol measures 6.7-inches long and houses a 3.68-inch barrel. Measured at the charging supports, the EZ is 1.08 inches thick, if you exclude the ambidextrous thumb safety. And, when measured from the top of the rear sight, the pistol has a height of 4.9 inches.

While similar in construction and appearance to its M&P brethren, the EZ is not a striker-fired pistol. Instead, it has an internal hammer similar to the M&P22s. This mechanism results in an extremely nice and crisp trigger pull, with my sample measuring an average of 3.63 pounds on a Lyman digital trigger pull gauge.

The EZ also sports a trigger overtravel stop, an accessory rail and a reversible magazine release. Additionally, it comes with two 8-round magazines. The magazines are similar to M&P22 mags in that there are black tabs in the center of the magazine that allow you to bring the follower down with one hand for easy loading with the other. This is another feature that accommodates users with weaker hands and allows them to more easily load the magazines.

At the range, I tried a few different loads from Sig Sauer, Speer and Magtech. The get-to-know-you phase was conducted with Sig’s 100-grain Elite FMJ ammunition.

As expected, the controls were very easy to manipulate. The slide required little effort to rack. In fact, with an empty chamber and magazine, I was able to push on the front sight with my index finger to get the slide to fully retract to the rear position. The middle tabs on the magazines were also welcome additions that made quickly loading easy.

Shooting the EZ was rather enjoyable. It was similar to shooting a .22 LR pistol. There was hardly any recoil, and the trigger had a fairly short reset, making it easy to get back on target for fast follow-up shots. The three white dots on the sights were quite prominent and very visible. This also aided in the speed department.

The EZ was reliable with one exception. I encountered an odd phenomenon with the 100-grain Sig FMJs. On several occasions, the last unfired round would rotate up and catch in the slide similar to a stovepipe jam. This happened with both magazines, but only with the Sig FMJs. None of the premium loads or the two other types of ball rounds experienced this issue. In fact, every other load I tried ran flawlessly.

I did experience a couple of failures to fire, but that was because I had accidentally flipped up the thumb safety during the recoil of the previous round. This was due to my hand size and the proximity of my thumb to the safety. I was not engaging the thumb safety while first shooting the EZ, so I did not start off by riding the safety like one would with a 1911. That was quickly remedied, and I had no more instances of this happening during the testing process.

Smith & Wesson has already issued a notice about this condition and is taking steps with a new design to mitigate such occurrences. Even so, for a pistol with a grip safety, I almost view the thumb safety as a hindrance.

My initial accuracy results while shooting off-hand were very encouraging. From a standing rest, the best five-shot group at 7 yards was only an inch wide. This came with Sig Sauer’s V-Crown JHPs, which also turned in the best average group size of 1.52 inches. As you can see, the EZ is capable of excellent accuracy and reliability with proper load selection.

All in all, I was very impressed by the new M&P380 Shield EZ, particularly the way it solves problems for the audience for which it is intended. Sure, there was a quirk here and there, but that’s why you should always practice with your firearm and find the best ammo for it.

The important thing is that Smith & Wesson offers a product that is easy to manage and manipulate by those who don’t possess the strength to operate other pistols. The grip safety is intuitive and requires no extra moves. Thanks to the charging supports, the slide is easy to retract. In its more standard size, the EZ offers little recoil to worry about, and the magazines are designed to be loaded with ease. 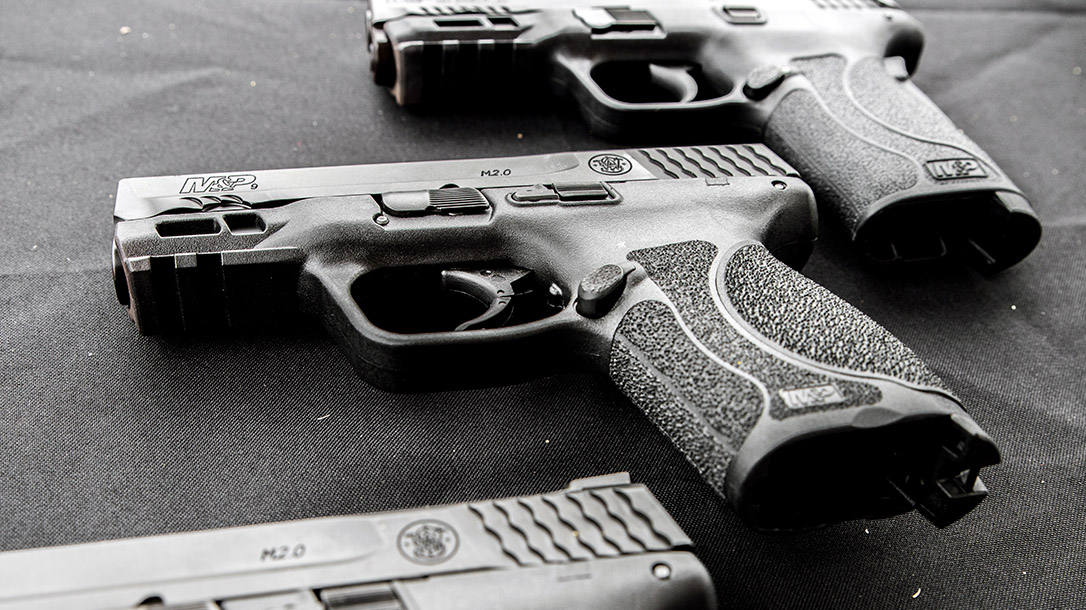 One day, when I get older, there may come a time when I might need such a product. I can appreciate what Smith & Wesson has achieved with this new offering. Also, I’m glad it took the initiative to develop a product that puts the capability of effective self-defense within everyone’s reach. EZ does it, and does it well.