The Impressive Evolution of the Walther PPQ M2 Pistol

In 1996, Walther joined the polymer age with its P99 pistol. It was a sexy beast, with a grooved and textured trigger guard and grip frame. It also included three different sized backstraps to customize the fit to the shooter’s hand. 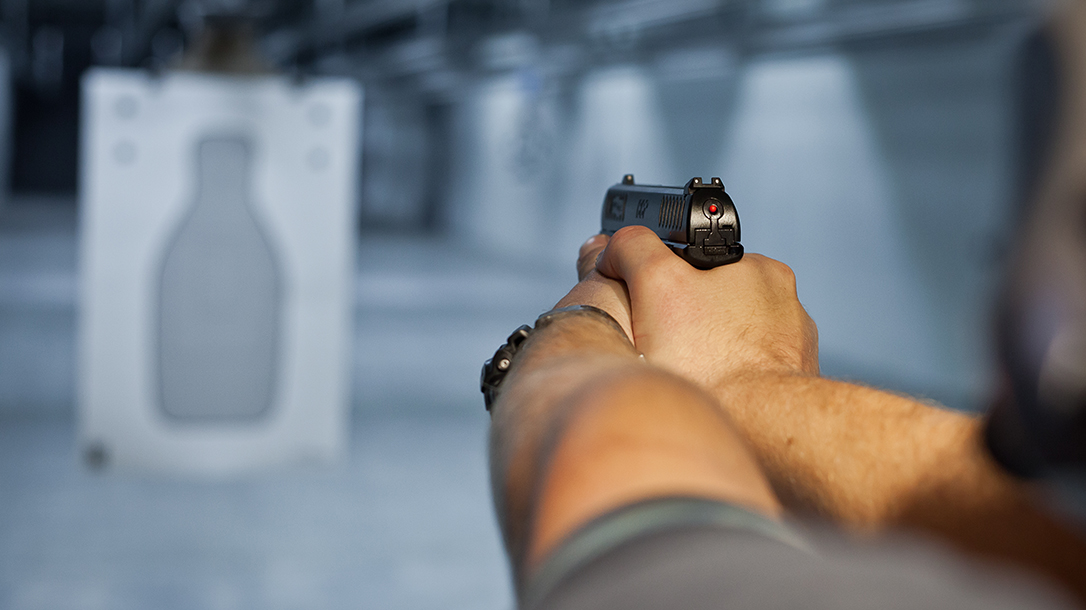 The P99AS (Anti Stress) trigger model was the most common. It was essentially a traditional Walther double-action auto-loader. However, the pistol contained a remarkably short trigger reset of 0.10 inches in single-action mode. Additionally, the single-action pull length could be set to have the same length as the double action mode.

In effect, the single-action trigger pull could be made to feel and act like a two-stage trigger and serve the same safety purpose. The double-action and single-action pulls were a light 9 pounds and 4.5 pounds respectively. Because of this, it was a fast shooting pistol.

Like all double-action Walthers before it, the P99 had a decocker, so it could be carried uncocked with a loaded chamber, ready to fire with a pull of the double-action trigger. It had a lot of good features, but one of them just stuck in the craw of American shooters.  The P99’s ambidextrous magazine release was a lever on the base of the trigger guard and was unnatural, if not slow, for the unpracticed to operate.

By 2011, the PPQ had evolved from the P99QA (Quick Action) variant of the P99. The PPQ maintained the P99 ergonomics, corrosion-resistant, matte-finish, Tenifer-coated slide and barrel, and windage adjustable rear sight. However, they did change the sight material from steel to polymer. The PPQ improved everything else.

Walther replaced the P99s front Weaver accessory rail with a M1913 Picatinny rail and made the slide lock release ambidextrous and longer. They also added gripping serrations on the front of the slide, and a new cross-directional texturing on the whole grip. The decocker was noticeably absent from the PPQ because it didn’t use Walther’s traditional double/single action trigger or the Quick Action trigger.

The PPQ featured a new “Quick Defense” trigger with a consistent pull from first to last shot. The trigger pull was quite light (between 4.8 and 5.6 pounds) with only 0.4 inches of travel. It earned recognition as the best trigger of any polymer, striker-fired pistol. Unfortunately for American shooters, the PPQ retained the P99 style trigger guard lever magazine release.

Finally, in 2013, the company released the Walther PPQ M2 with the long hoped for grip-mounted, thumb-operated magazine release. Left-handed shooters could even switch it around. Also, the release was partially shielded on the bottom to reduce the chance of accidentally releasing the magazine.

Now the button release is available on the whole line of PPQ pistols from the PPQ SC (subcompact) 9mm, 3.5-inch barrel, 10 shot (15 shot with the extended grip magazine) to the PPQ Q4 tactical 4.6-inch threaded-barrel pistol with the top rear of its slide milled down to accept optics. There’s even a PPQ 45 in .45 ACP. This 12-shot handgun comes with a 4.2-inch barrel or a 4. 875-inch threaded barrel, weighing 28 and 29 ounces respectively unloaded.

Black is basic for the line, but the 9mm models offer frames in three other colors — Tungsten (dark gray), FDE (tan) or OD (olive drab green).

The evolution from P99 to PPQ M2 took Walther 17 years and reset the upper limit of how great a striker-fired handgun could be. American shooters got what they asked for and more, with a diverse, multi-caliber, product line spanning full-size duty pistols for law enforcement and competition to subcompacts for concealed carry. We had a great time with this gun at the 2018 Athlon Outdoors Rendezvous. It shot well, and we determined this is one of Walther’s best, particularly since there are so many models.