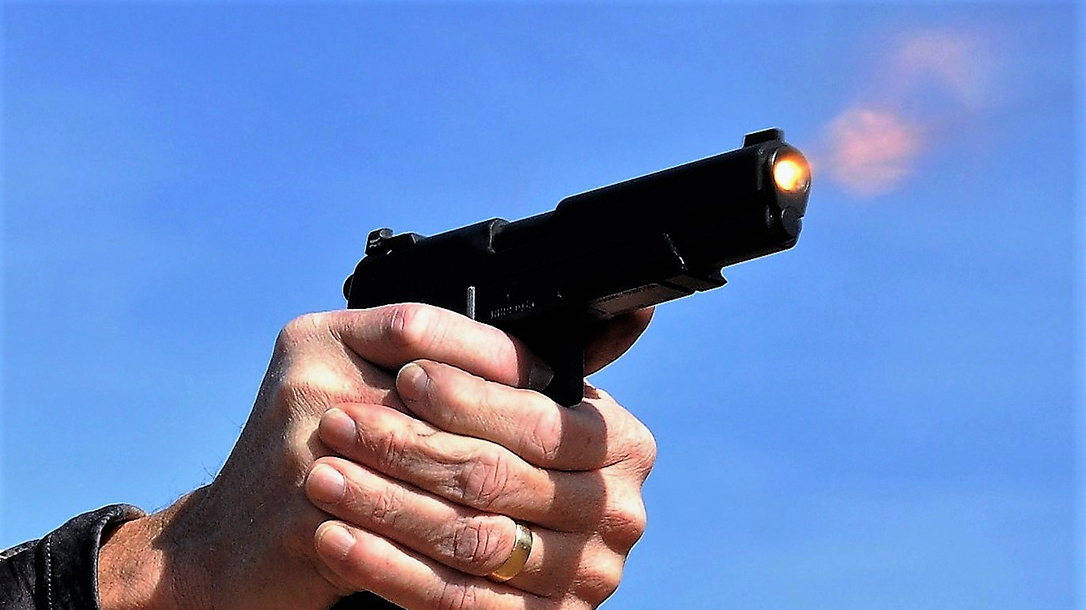 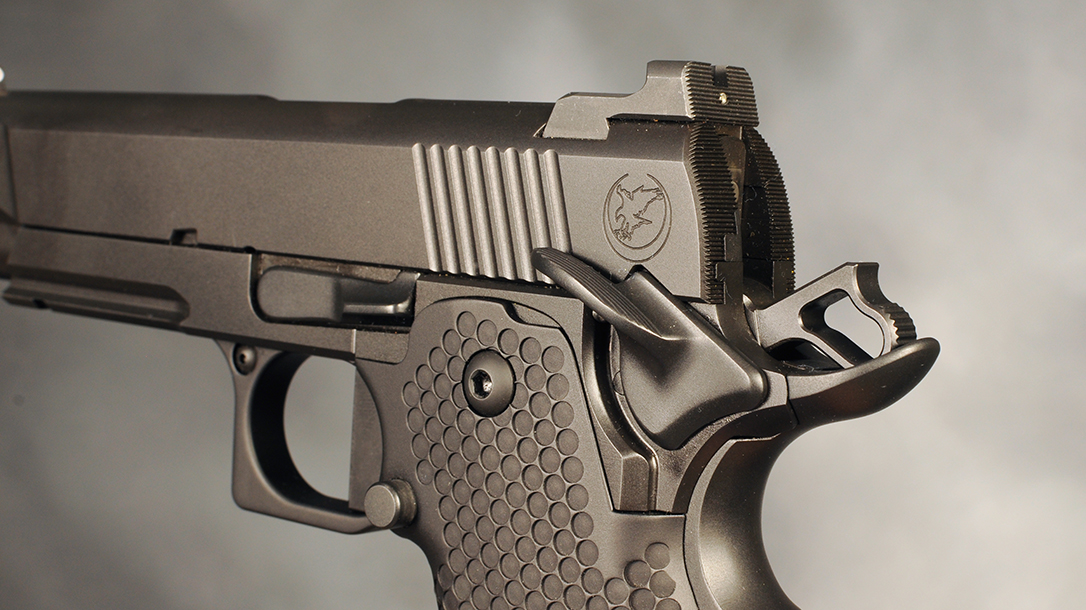 2 of 9
Photo by Camera One
8-Ball Radius Serrations 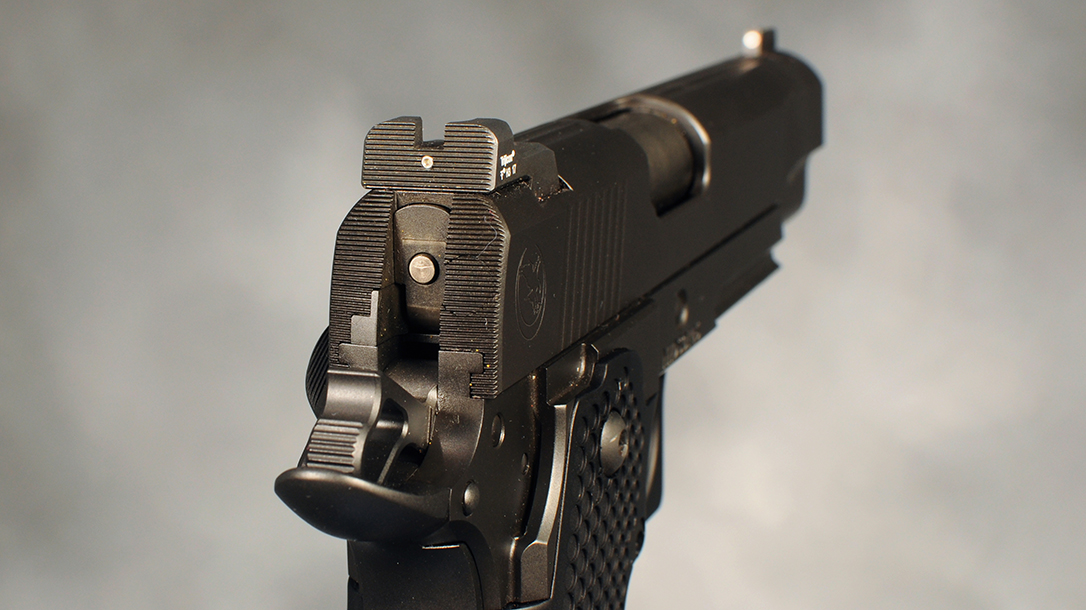 3 of 9
Photo by Camera One
Heinie Ledge Rear Sight 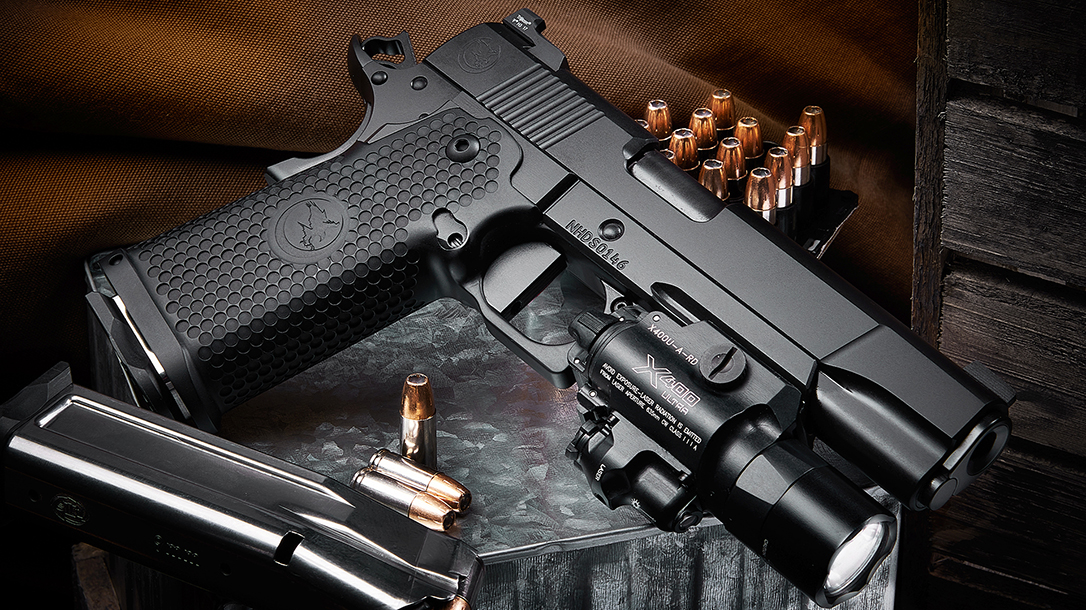 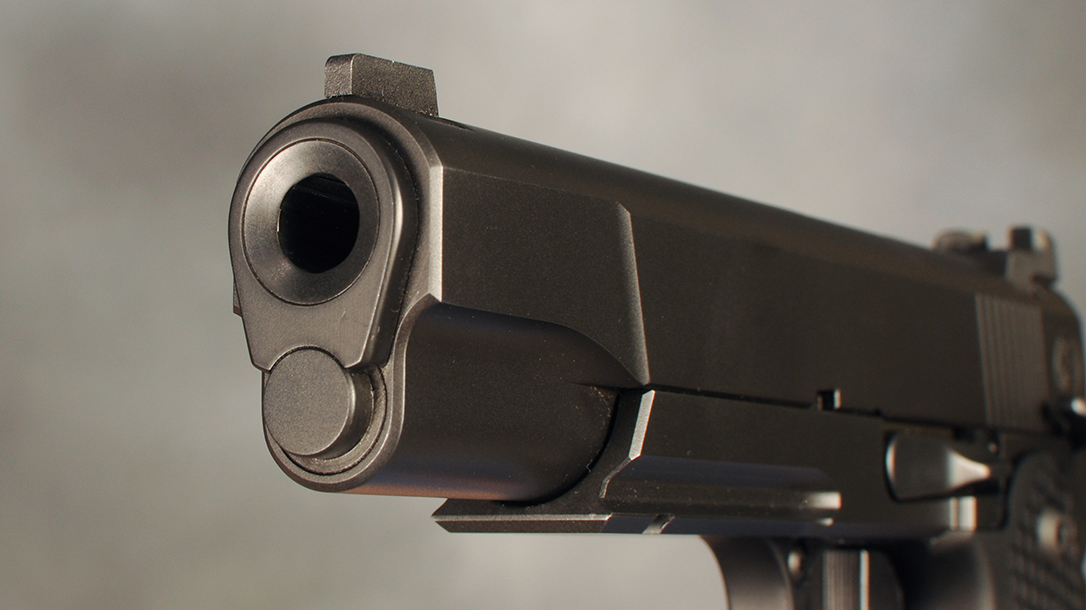 5 of 9
Photo by Camera One
Bevel Treatment 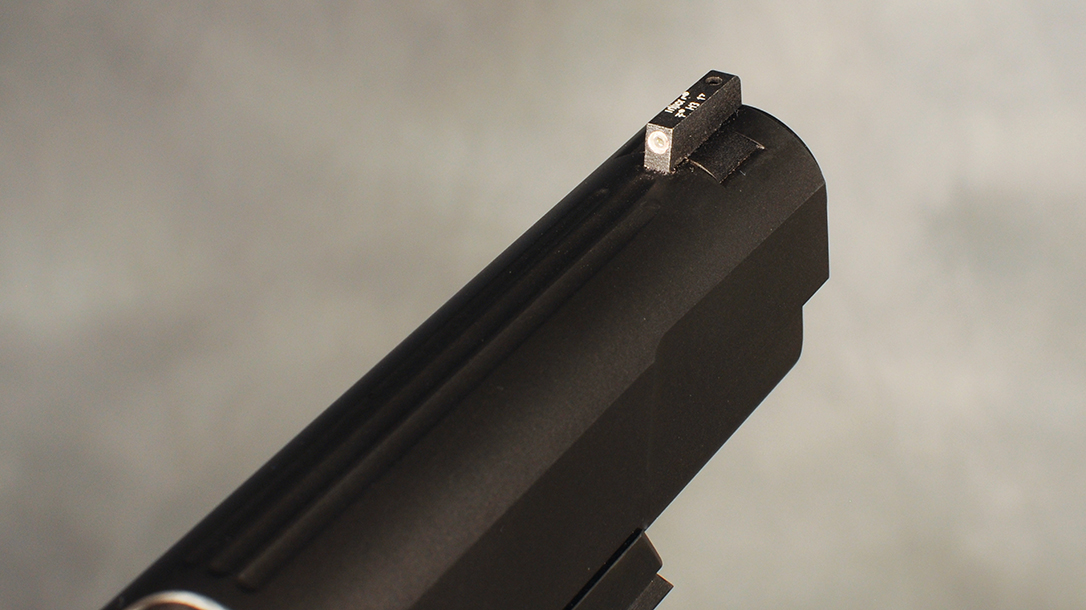 6 of 9
Photo by Camera One
Tritium Front Sight 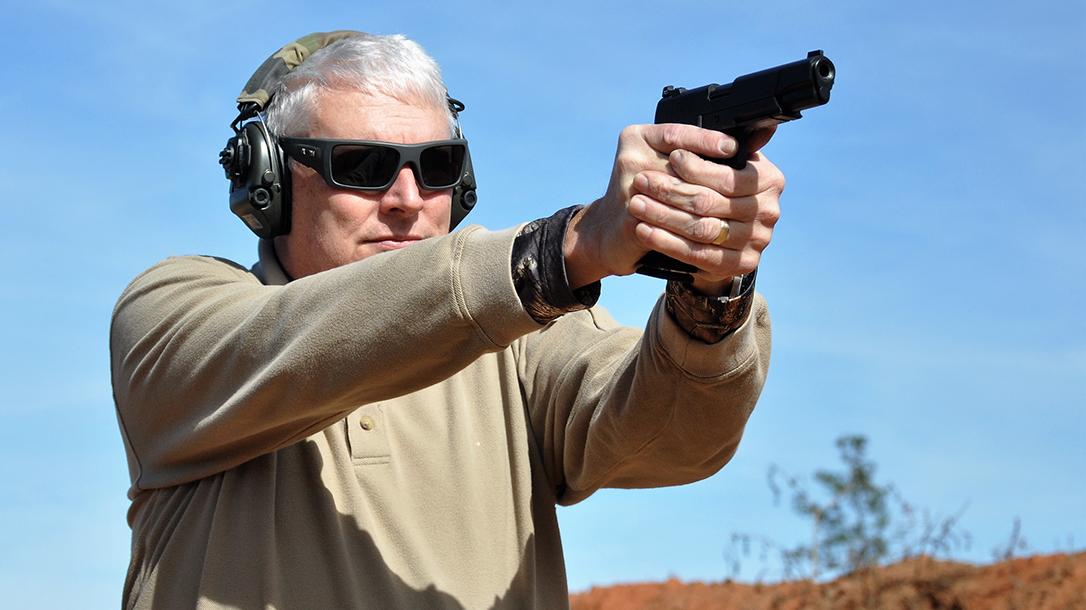 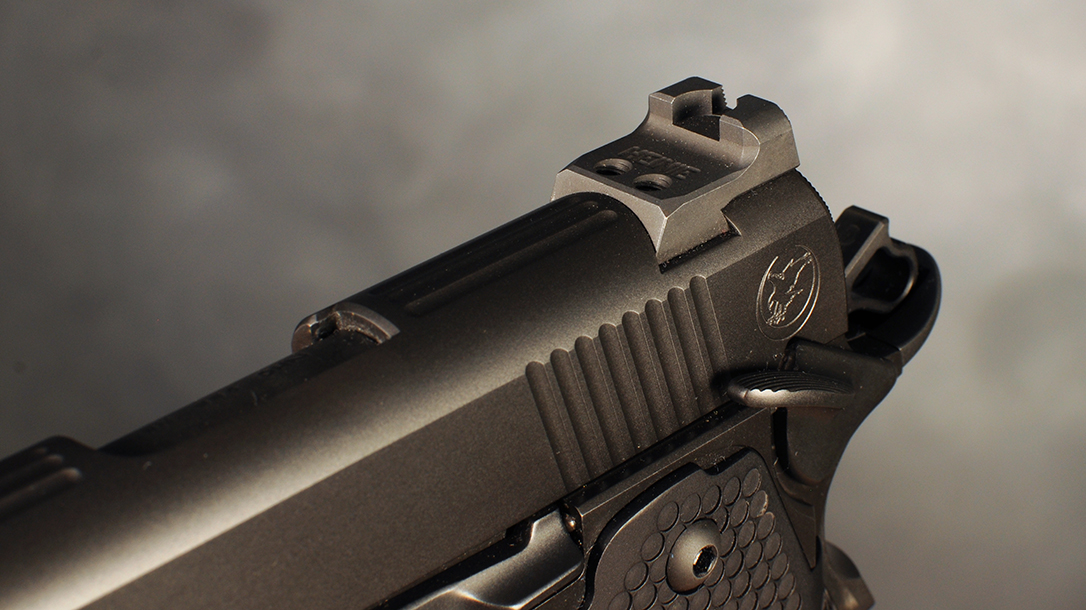 8 of 9
Photo by Camera One
Vertical Edge 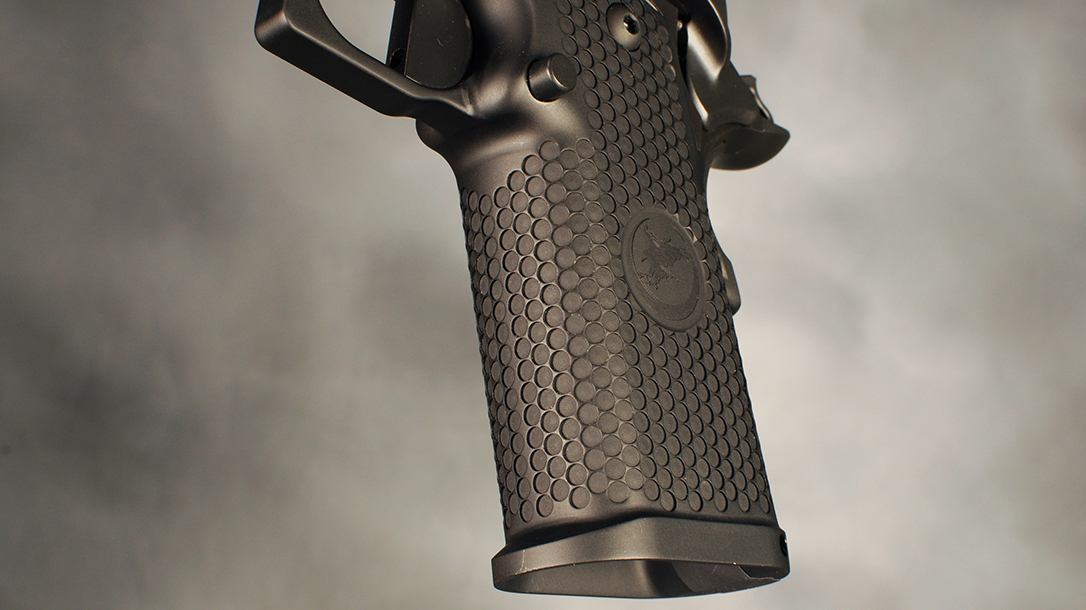 9 of 9
Photo by Camera One
Circle Wraparound Texturing 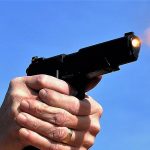 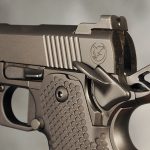 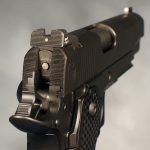 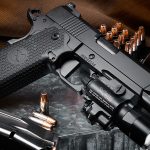 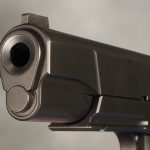 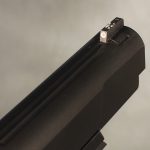 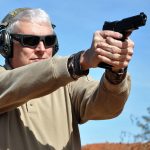 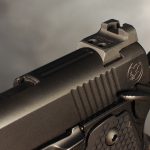 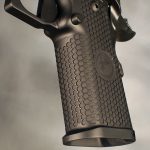 Last year, I was with Mark Stone and the Nighthawk Custom crew when Mark asked what I thought about the company building a Nighthawk double-stack 9mm. My first thought: Why? While my experience with double-stacks was limited, I knew that they could be temperamental and unreliable. 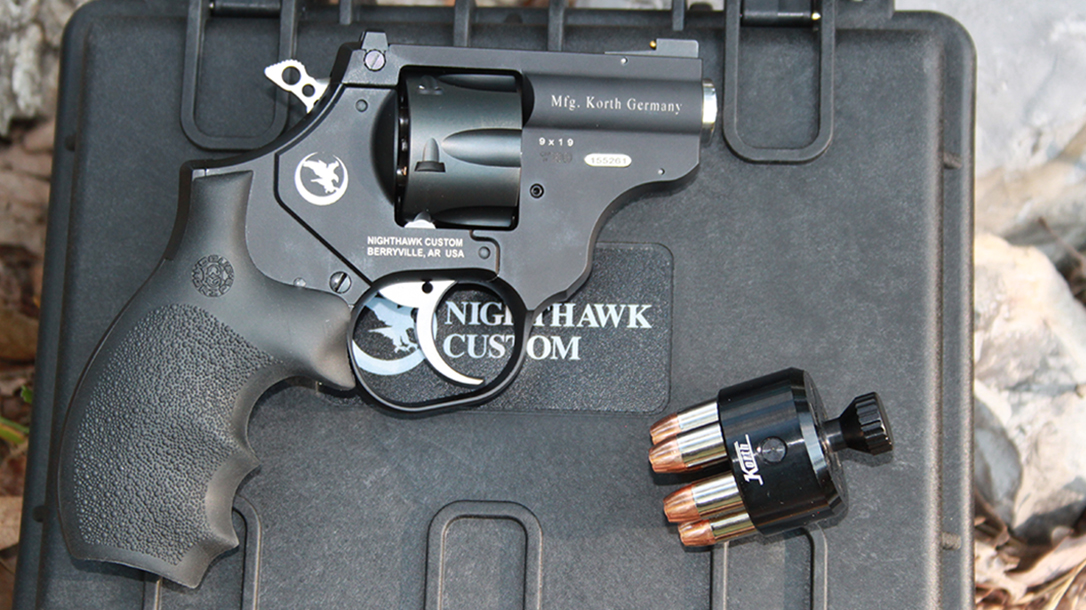 Also, at the time of the discussion, the market was still somewhat depressed, and I questioned the wisdom of investing in a totally new project. Also, I wasn’t the only one that felt that way. Several Nighthawk employees had the same concerns. But I’ll be the first to admit that I was wrong.

The company recently launched the Nighthawk double-stack, not as a new pistol, but as an upgrade to any of its 5-inch-barreled, single-stack 1911s. The upgrade only costs $650. And for this review, Nighthawk sent me a Falcon Double Stack. Opening the green Nighthawk case, I found a sleek, all-black pistol that exuded stealth. In fact, everything was black except the markings and tritium inserts in the sights.

Nighthawk Custom introduced the Falcon back in 2011, and I’ve been fortunate to review both the Government and Commander versions. The Falcon represents a blending of old-school design and modern quality in a very clean, functional and attractive pistol. As with all Nighthawk pistols, the Falcon is the result of hours of hand-fitting precision-made parts using old-fashioned files and sanding sticks.

The Falcon slide is machined from a forging at the company’s facility in Berryville, Ark. The slide is a traditional Government Model configuration with a match-grade, 5-inch barrel, as well as a traditional bushing and recoil spring system. The frame and slide are fitted and then hand-lapped for that glass-on-glass feeling. Nighthawk makes all internal parts to specifications from quality tool steel. In other words, for those who are concerned about such things, there are no metal-injection-molded (MIM) parts in any Nighthawk pistol.

The Falcon comes with an extended, single-side thumb safety, a beavertail grip safety and a low-profile slide stop. The solid match-grade trigger is precisely tuned for a clean trigger pull that breaks at an even 4 pounds.

The treatments on the slide are a departure from other Nighthawk models. Traditional cocking serrations have been replaced with eight ball-radius cuts to provide a positive but less abrasive texture. Three more ball-radius cuts have been made along the top of the slide to help you acquire the dovetailed tritium front sight. The Falcon also features a Heinie Ledge rear sight with its own tritium insert and a vertical leading edge that can be used as a cocking surface. The back of the Heinie sight has 40-lpi serrations to reduce glare, just like the rear of the slide. The most striking feature of the Falcon, however, is the bevel treatment applied to the front of the slide. The Hi-Power-style cuts are attractive and functional because they aid in re-holstering the pistol.

Having limited experience with double-stack 1911s, I spoke with Allen Wyatt, Nighthawk’s lead gunsmith. He walked me through what separates the company’s double-stack design from competitors. For example, the frame and grip were designed from the ground up by an outside vendor to Nighthawk’s specifications. This allows Nighthawk to utilize its slides, internal parts and other components. To increase reliability, Nighthawk uses a Wilson/Nowlin-style feed ramp. Also, the company designed and manufactured a new grip safety and mainspring housing for this program. Each Nighthawk double-stack comes with two stainless STI magazines.

The frame is made from steel while the grip is made from 7075-T6 aluminum. The wraparound texturing consists of a series of small circles that cover the frontstrap, side panels and mainspring housing. The flared magazine well includes a lip on the frontstrap. The beavertail is precisely installed and blended, and it’s void of any unnecessary play. You’ll also notice a flat, machined-aluminum trigger with an integral overtravel stop. The triggerguard is squared and undercut so you can get a higher grip on the pistol. Finally, the slide stop and thumb safety are standard Nighthawk parts, and the dust cover has a Picatinny rail.

Overall, the Falcon Double Stack is a large pistol. However, the grip feels good in the hand. Out of curiosity, I put calipers to the frame to compare it to my daily carry pistol, a Glock 19 Gen4. The Falcon’s frame is 1.28 inches wide at the base of the triggerguard while the G19 is 1.2 inches. Measuring from the frontstrap to the backstrap, both the Falcon and G19 are exactly 2 inches. Granted, the length of the frame and slide make the Falcon significantly larger than the G19, but I was surprised that the actual grip measurements were almost identical.

On my first trip to the range, I ran as many different loads as possible through the pistol, from Super Vel’s 90-grain +P JHPs and 147-grain Hush Puppy suppressor rounds to a mix of loads from Aguila, Federal, Hornady, Sig Sauer and Speer. The Falcon Double Stack ate everything with ease. Also, with an unloaded weight of 36 ounces, it stayed on target. The frame texture provided a positive gripping surface without being overly abrasive. I also appreciated how easy it was to load the 17-round STI magazine.

On my second trip to the range, I made mincemeat of a steel silhouette starting at 15 yards and working back to 45 yards. I even managed a few headshots from around the 40-yard line. The white-ringed tritium front sight was easy to track, and I liked the purchase the flat trigger allowed. The shots broke cleanly, and the reset was clean and predictable. And while I knew I was shooting a wide-body 1911, the overall handling was outstanding.

As is my custom, I let as many friends and associates examine and shoot the Falcon Double Stack to get as many opinions as possible, and every person that held and shot the gun came away impressed.

For serious testing, I shot the Falcon off a bench. At 25 yards, most of my groups were around 2 inches and would have been smaller had I not ruined things with a called flyer. All loads were very soft shooting given the Falcon’s 36-ounce weight and 12-pound recoil spring. I also ran several hundred rounds of Aguila 115-grain FMJ and Federal American Eagle 115-grain Syntech TSJ training ammo. Both of these loads were easy shooting and made quick splits easy. 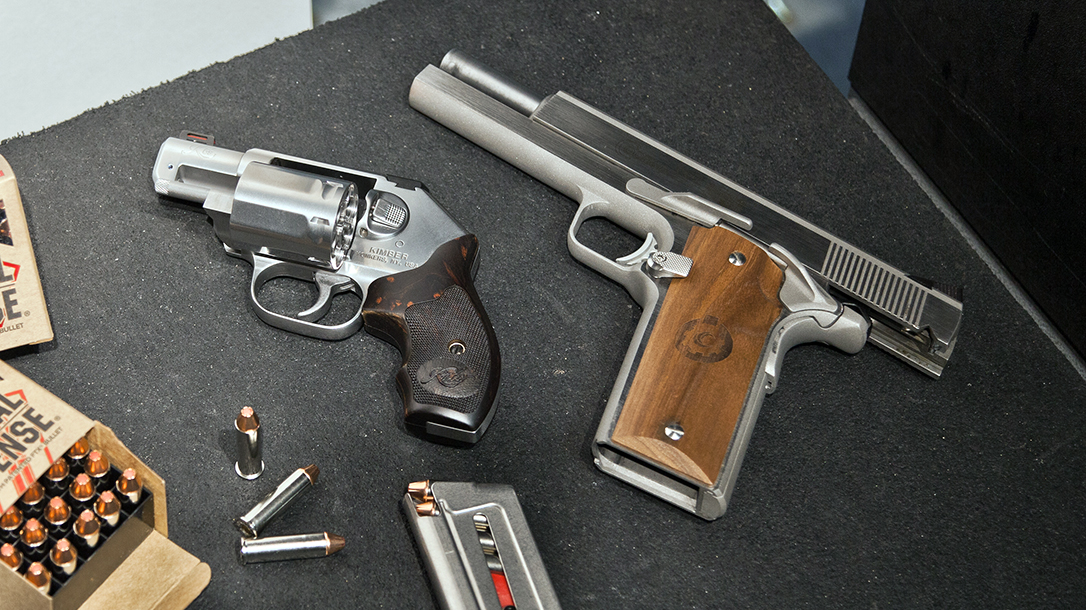 To be honest, not being a competitor, I had never given much thought to owning a double-stack 1911. In the past, I have either carried a standard Government Model 1911 or a high-capacity Glock 19. So where does the Falcon Double Stack fit in? First, with a light, it would make a great home-defense pistol. Second, it also offers a very viable alternative for members of the law enforcement community who favor a 1911 but also appreciate the high magazine capacity of today’s striker-fired models. I’m even sure some out there would try to carry this gun concealed. Finally, there are those among us who just like the “cool factor” of owning a high-quality 1911 that shoots a lot of relatively affordable rounds.

Whatever category you find yourself in, the Nighthawk Double Stack has a lot to offer, as would any model given the double-stack upgrade. The quality, fit and finish of my test pistol lived up to what I have come to expect from Nighthawk Custom. 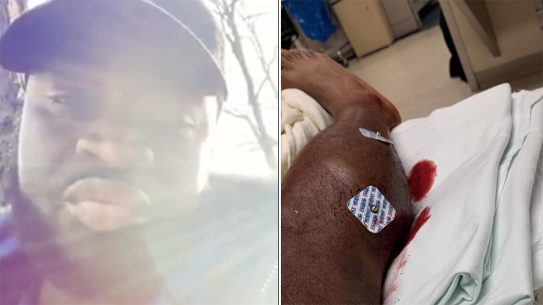 Despite strict gun laws that prevent most citizens from being armed, a political volunteer...