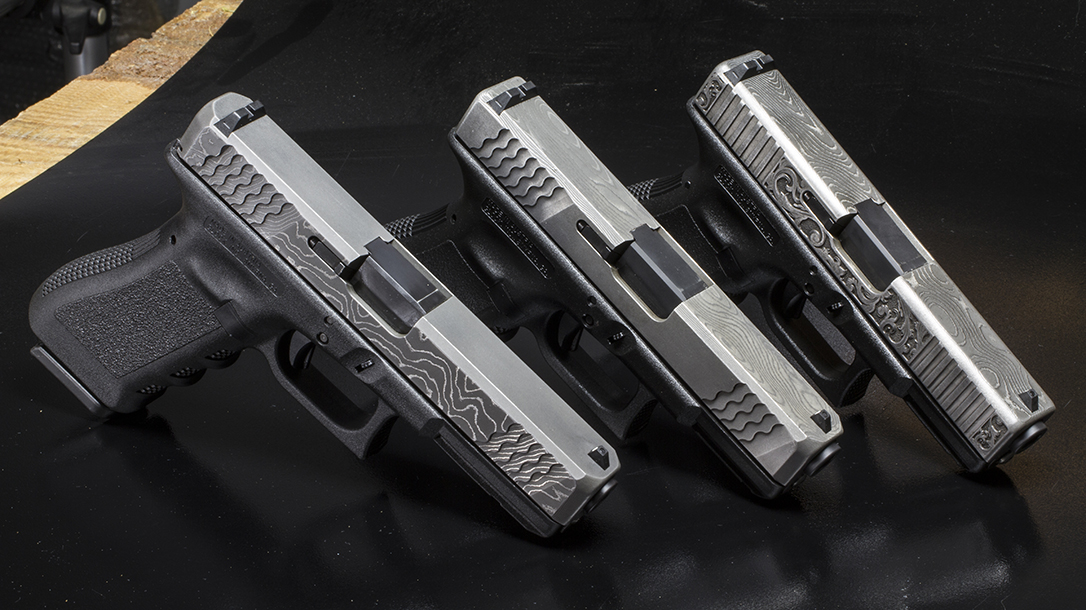 1 of 6
Photo by Zack Carlson
Damascus Slides for Glocks 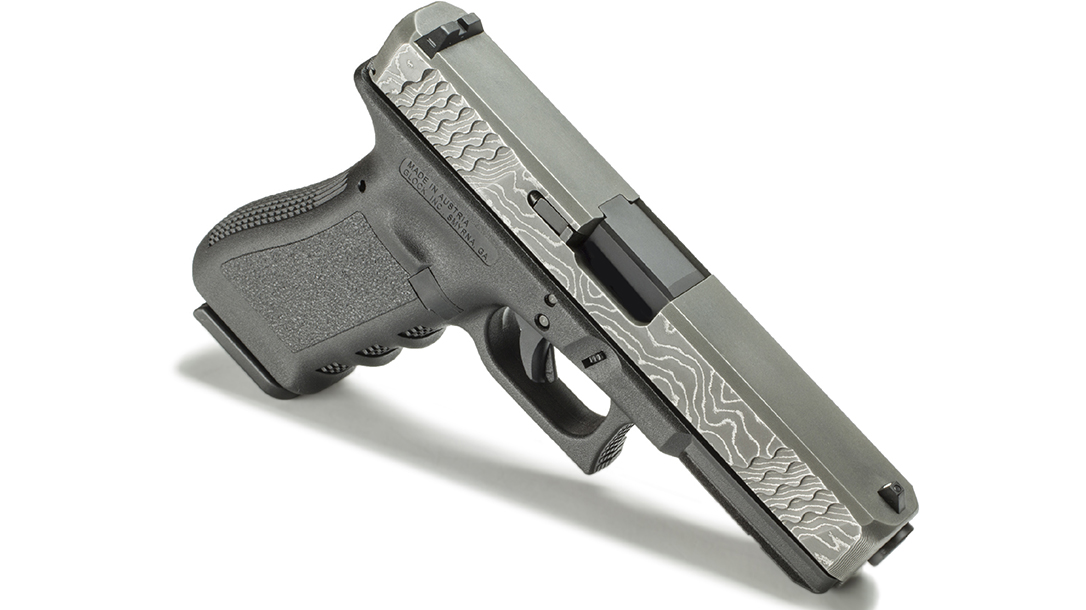 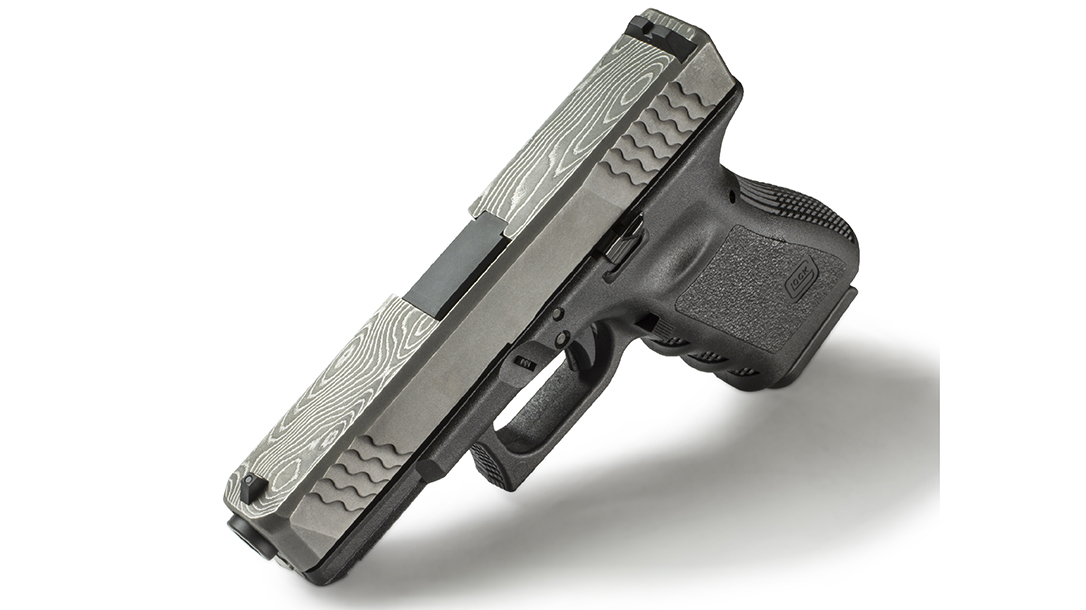 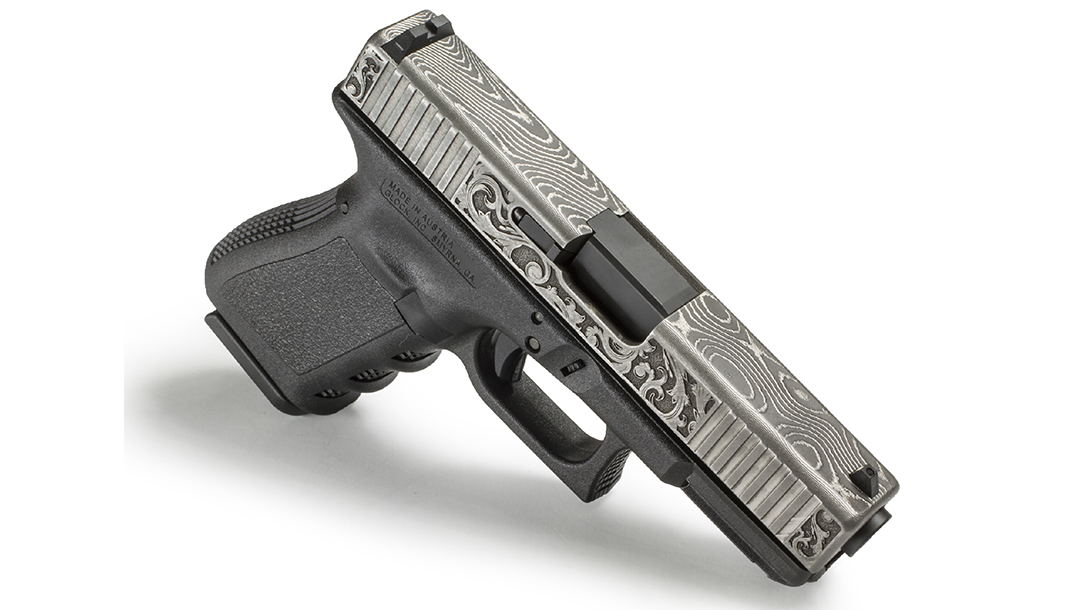 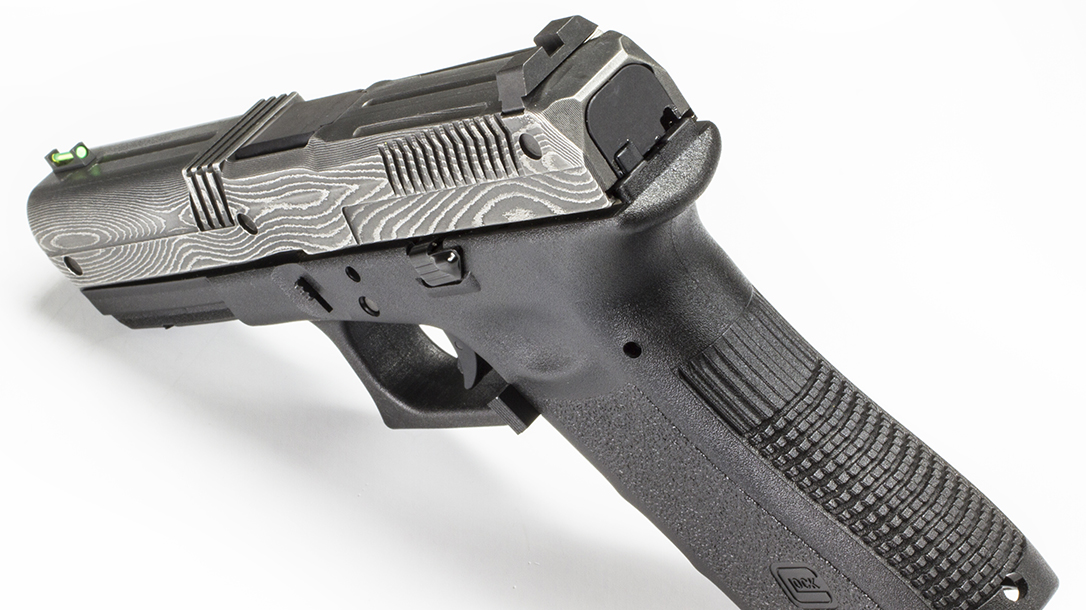 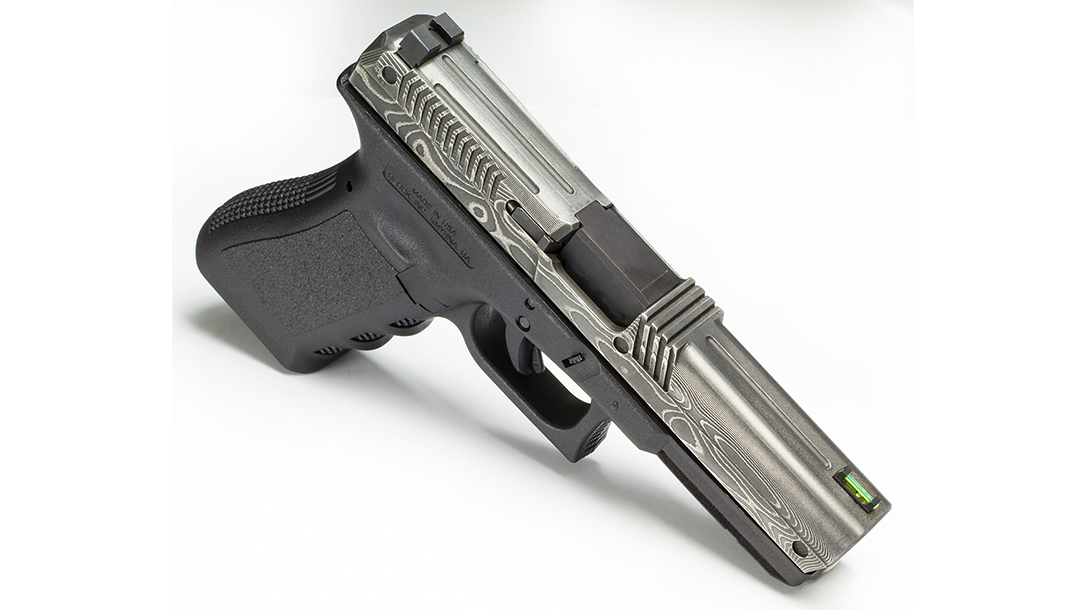 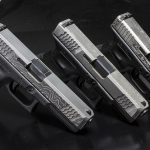 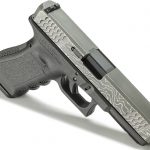 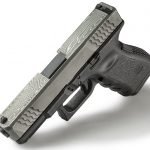 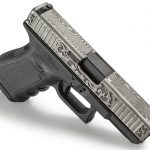 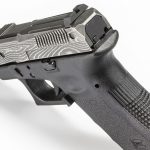 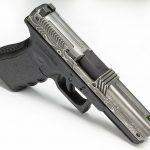 It’s easy to see that Damascus steel is more beautiful and elegant than most other materials today. Today, you’ll generally find Damascus steel used in high-end knives. A beautiful knife blade with exposed lines from the layers within the steel is unlike anything else out there. Just looking at it, you can imagine a blacksmith working over a hot piece of metal, hammering mercilessly until layer after layer has been folded into the next. For those who have never seen something made from Damascus steel, the best way to describe it is to say that, instead of the uniform grain found on a normal block of steel, random layers are exposed and highlighted. 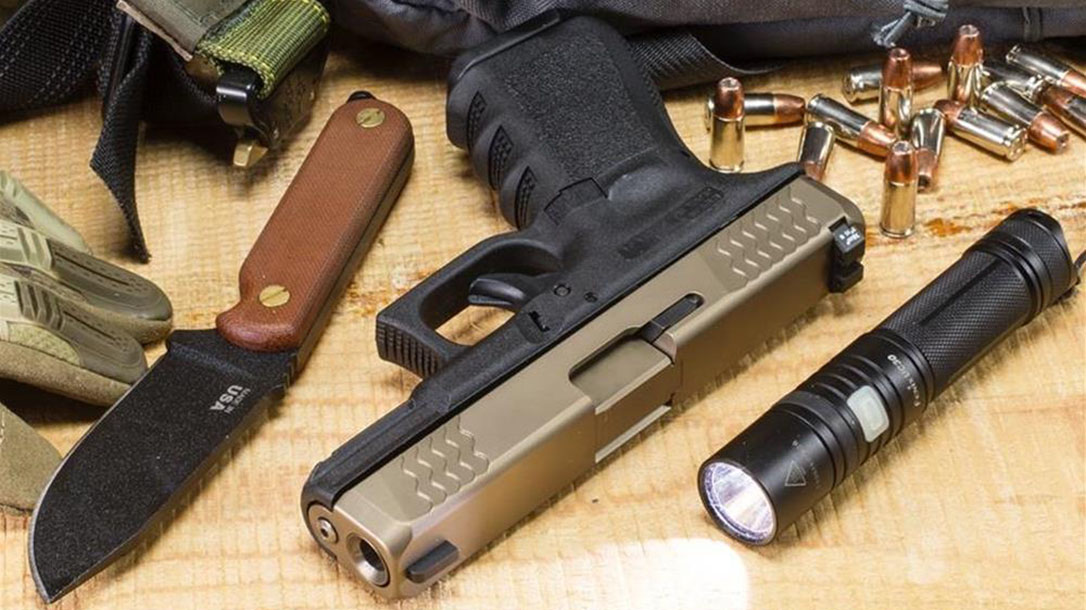 I work for Lone Wolf Distributors, and we produce just about anything you can think of for Glock pistols. In 2016, I was approached by a company that made Damascus stainless steel billets mainly for the knife industry, but they were willing to make much larger pieces suitable for pistol slides. I was instantly intrigued, and visions of the many possibilities ran through my mind.

I had seen 1911 slides and frames offered in Damascus, but never had I seen a Glock-compatible slide. Sometimes bravado says you can do anything, but then you start to wonder why no one else had made such a Glock slide in the past. Were there issues that needed to be worked out? Was there demand from Glock shooters for such an exclusive slide? Those were all questions that needed answers, but the curiosity was killing me. I wanted to create a Damascus steel slide for a Glock.

Soon after that initial pitch, I obtained material specs and formulated quotes. I also explored what was required to machine a Damascus steel slide. Because the material is made from multiple different metals all fused together, there are many things to consider. The cost of the large Damascus billets required for slides is staggering, so we couldn’t afford to make any mistakes.

After the machinists were ready and the heat-treaters were on standby, we ordered material. Once the purchase order was submitted, it suddenly became real. We were really going to do this. Christmas came slightly early in 2016, as I got an email saying the Damascus material had been shipped. We were so excited to have the Damascus billets that we decided to bring them to the 2017 SHOT Show. It was nice to bring the material and get feedback from our partners and customers to see what they thought of our side project.

Once the dust settled after SHOT, things began returning to normal at the shop. We still hadn’t decided on a particular style for machining the precious Damascus steel slides. After much debate, we settled on a custom machine pattern we had been previously offering for our stainless slides. The pattern had sold well on standard slides, so we expected the popularity to transfer to the Damascus slides as well. Now it was time to figure out how to fit the Damascus slides into our ever-busy production line.

However, between selecting the machine pattern and a spot opening up on the production line, doubts began to form. Would customers really want this pattern? What would the response be if they wanted something different? We always seem to release Product X, and the customers say, “Yeah, I love it, but can you do it with this or that change?” Once these Damascus slides were done, it would be very difficult to make them into something different.

That was when the epiphany came. We had started making stainless slides in blank form. These blanks had all the internals machined yet had completely rectangular exteriors. These were initially intended for our industry partners. On a whim, we decided to sell them on our website for retail customers as well, and they were a hit. So, we decided to make all of our Damascus slides in the blank format as well. This meant we could leave them alone until a customer placed their order for a Damascus steel slide. This allowed for on-demand builds with the maximum amount of customization possible.

This brings us to the 2018 SHOT Show, where we unveiled the slide blanks ready for final machine work. The reception was positive, and most onlookers were curious to see the final retail price. Essentially, our idea to offer customizable blanks was validated. Following the show, we got to work making a few sample guns so customers could get an idea of what the final product would look like.

We produced three initial samples. The first one was a G17-length slide that incorporated our wave front and rear serrations along with a 45-degree bevel along the top edges and front and rear bull-noses. This slide had the exposed layers of the Damascus facing the sides. This side exposure gave the layers more real estate to make their statement. The top was able to stay a nice subdued gray that was not distracting to the eye while shooting.

The second sample was intended for a G19. It was much like the first, but with the layers of Damascus exposed on top instead. The sides were left subdued gray, which was a prime spot for laser engraving.

We machined the third sample, also for a G19, with vertical straight serrations at the front and rear. It kept the OEM-style squared-off corners and had the exposed layers facing the top. With the prime laser-engraving real estate exposed, we set to work creating intricate scrollwork patterns to fill the voids. The end result is a classic look with an Old World craftsmanship feel. 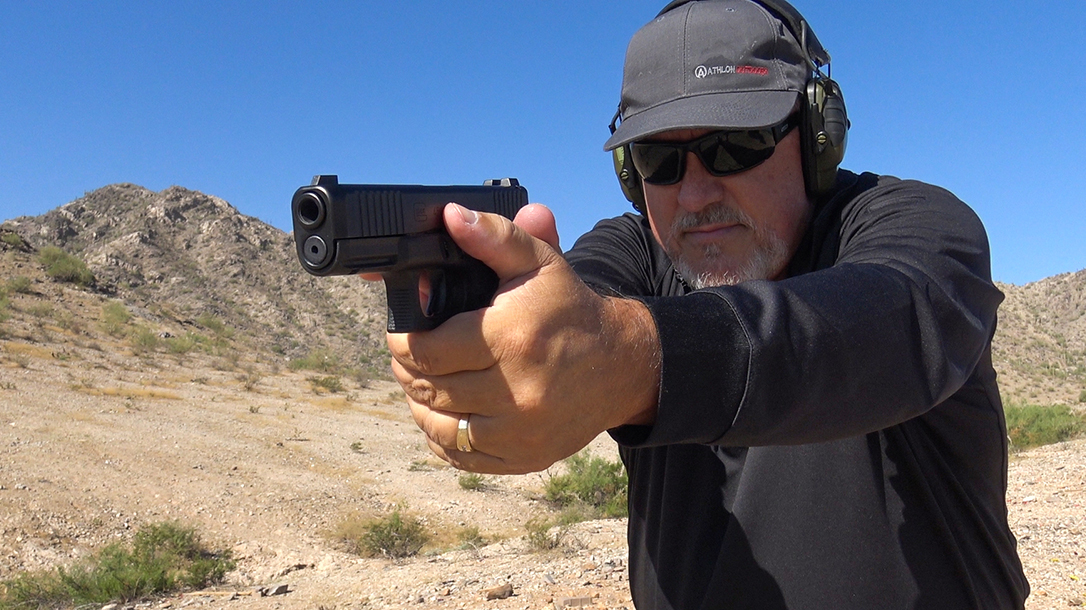 Now that we had some Damascus slides built, we were able to officially launch them. Customers can work with our staff to build a true heirloom pistol with a Damascus blank as the canvas for their masterpiece. For $1,500, a customer can choose between a third-generation G17, G19 or G34 slide, pick out various machining and barrel options, and have a completely ready-to-use top end pistol that is sure to be handed down to the next generation.

It was a long road from inspiration to final product. I spent many hours thinking about Damascus steel. But in the end, I can say that we (Lone Wolf Distributors) created a slide that nobody has ever made for Glock pistols. That alone makes the effort worth it. Ballistic Magazine even put it on its list of the best Glock aftermarket slides. 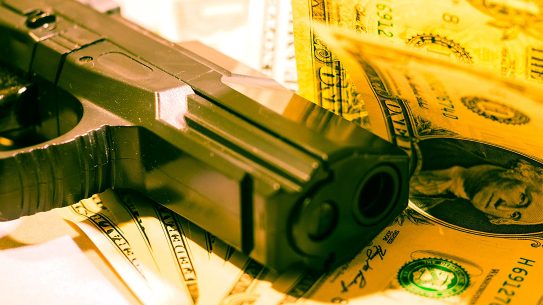 An Indiana man got caught unaware while sitting in his car when a robber...