Avoidance and escape is the best way to stay safe from attackers. However, sometimes attacks are unavoidable, such as in this case of a New Guinea man who got boxed in by his attackers. 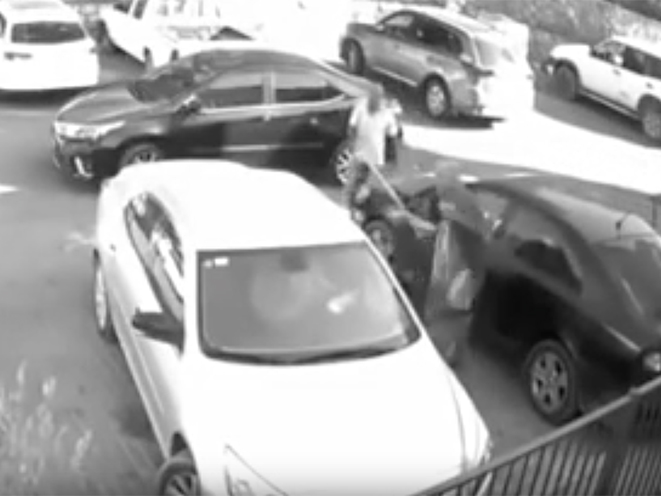 The attack happens at a convenience store, and is actually fairly well planned. In fact, one of the attackers was already in place before the others arrived.

The video begins with one vehicle backed in by the store and several men standing around the entrance. Then, another truck pulls in, stops and reverses, blocking the first truck. That’s when the attackers pull guns and advance on the first truck. While the attackers plan on overcoming the victims with surprise and numbers, the situation didn’t go as they intended. In fact, the first shot came from inside the victims’ truck through the windshield.

At this point the attackers are coming from multiple sides, so the intended victim piles out of the truck with his gun and immediately gets behind the truck. As he returns fire, he constantly moves positions for both safety and target acquisition.

After several shots go back and forth, the attackers realize that this isn’t an easy mark, and quickly flee the area. One even has to run to get into the back. Now it is unknown why the person in the driver seat didn’t engage the attackers. If he was in the truck, he either didn’t have a gun and got low for safety, or the attackers hit him early in the fight. Of course, he could also have been inside the store and unaware of the situation. This actually makes the most sense, as the defender didn’t seem concerned about the driver after the shooting stopped.

New Guinea Man Made Use of Cover and Concealment

The New Guinea man won this fight because he made some good decisions on the fly. To start, he saw the danger and fired first. Recognizing danger is the whole point of situational awareness. He saw a danger and responded. Then, knowing that he couldn’t fight from inside the truck, he exited and started moving to concealment.

Now the difference in cover and concealment is simple. Concealment is something that hides the body, while cover protects the body from bullets. Both are useful, and often cover will suffice, as most assailants don’t seem to realize the difference. Despite the fact that bullets will blast through concealment, most attackers continue to fire at what they can see of the actual person rather than what the person is hiding behind.

The defender also continued to move, constantly looking for a better angle in which to engage. Mobility is an important factor in a gunfight. In fact, it is just as important as accuracy. Toward the end of the fight, he even hid behind the wheel-well and engine block, which offers cover from being hit.

Now it is unknown whether the defender has had training. However, he obviously knew what to do. In fact, the only mistake he made was staying too close to the truck. Sure, hugging cover and concealment happens often in the movies, but experts recommend backing off a couple of feet.

In fact, every gun owner should obtain at least some training from an expert. There are many training academies that go way beyond simple accuracy, such as Gunsite and Shootrite. These schools teach gunfighting, which is what you really need to know if you carry a gun.