The 10mm Auto cartridge has been around in one form or another for some 35 years. It grew out of a search for a pistol caliber starting with “4” that would be both powerful and provide a higher capacity than conventional pistols of the day. The cartridge was strictly niche until 1989, when the FBI adopted it following the disastrous Miami shootout. 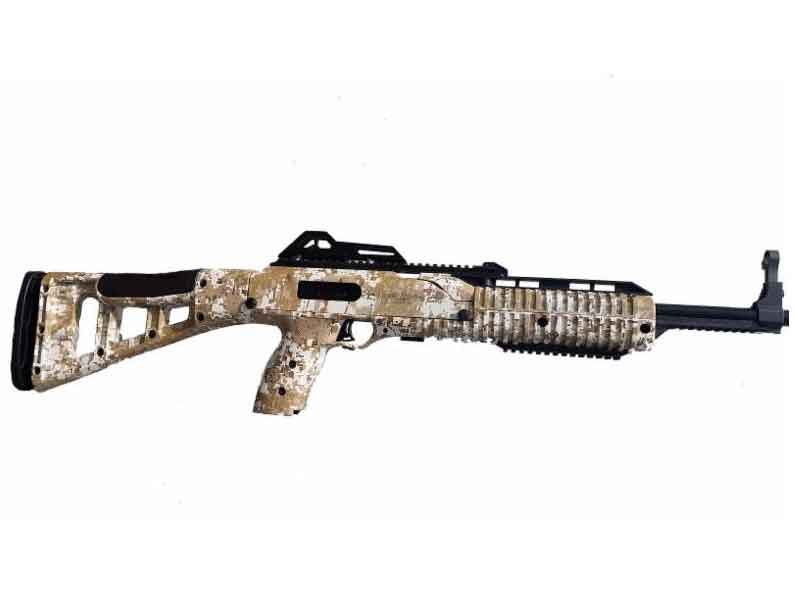 However, a cartridge with an overall length of 1.250 inches and a SAAMI pressure maximum of 37,500 psi needs a large-frame pistol. Also, the size of the chosen gun plus the recoil generated by the 10mm was too much for many FBI agents. The caliber was soon dropped and the 10mm began to fade into obscurity as the .40 S&W cartridge took over the law enforcement market, prompting huge civilian sales.

But fans of the 10mm hung in there. After all, it will launch .40-caliber bullets 270- to 300-fps faster than the .40 S&W with its 35,000-psi SAAMI specs, plus its larger case capacity will handle heavier bullets. Today, 10mm sales are brisk and new firearms are popping up in this chambering on a regular basis.

Pistol-caliber carbines (PCCs) seem to be getting more and more popular, as they magnify the power of the pistol cartridge and offer a shooting platform that is easier to control with more accuracy potential. You can find a number of 9mm, .40 S&W and .45 ACP PCCs, but I’m only aware of three manufacturers making them in 10mm, with prices ranging from just over $650 to more than $1,420. But then Hi-Point Firearms changed that recently by introducing its 1095TS carbine for $390.

With a price point this low, almost anyone can afford to add some optics or other tactical accessories like lights or laser sights. The basic model has a rugged black polymer stock with a recoil-dampening buttplate and a raised rubber cheekpiece. You’ll also find sling swivels, and the company provides a nylon two-point sling. The forend is grooved for a secure hold, and the pistol grip has effective texturing.

Say what you will about Hi-Point carbines, but I’ve owned and been shooting them for over 20 years. My personal 9mm model has always been reliable and accurate, and the .380 ACP, .40 S&W and .45 ACP versions I’ve tested have all run like champs. Don’t judge a book by its cover. The stock configuration has changed slightly in recent years, making them look less like the rifles in the original Planet of the Apes. And for just $390, you get a blowback-operated carbine with a 10+1 capacity, a shrouded front post sight, an adjustable rear peep sight, a receiver-length accessory rail and another rail on the bottom of the forend for accessories.

Unloaded, the Hi-Point 1095TS weighs 7 pounds. Its alloy receiver shroud and barrel are flat black, and the 17.5-inch barrel is threaded for a suppressor. It also has simple controls. The charging handle protrudes from the left side of the receiver and also acts as a bolt-hold-open device. The safety is just above the pistol grip on the left side, and the magazine catch is near the front of the grip on the same side. Despite feeling “mushy,” the single-stage trigger on my test carbine had a 6-pound pull weight, which is standard for these guns. Finally, the carbine comes with one single-stack 10mm magazine, a small multi-tool, an owner’s manual and a trigger-locking device.

Many shooters today participate in 3-Gun-style competitions or just want a handgun and long gun of the same caliber for logistics reasons. So, I sought a handgun to pair with this Hi-Point carbine. There are a number of 1911 pistols out there in 10mm, but I wanted a pistol close to the original Bren Ten, which was built on a CZ-75-type platform. And I found just what I was looking for in the Witness P Match Pro from European American Armory. This new release comes from Tanfoglio of Italy, which has long been known for making superb CZ clones.

The Witness P Match Pro is a full-sized handgun with a 4.75-inch barrel, an overall length of 8.75 inches, a height of 5.6 inches and a width of 1.4 inches. Unloaded, the pistol weighs 30.4 ounces, and EAA includes one 14-round magazine in its plastic carrying case along with a nifty little cleaning kit, a trigger lock and an owner’s manual. Also, the “P” designation stands for polymer, as the pistol has a one-piece polymer frame.

This is a recoil-operated, locked-breech design with a DA/SA trigger. Shooters can fire the first shot in DA mode, or can carry the external hammer cocked with the safety engaged for “Condition One” carry to fire the first shot in SA mode. The DA pull has about 0.25 inches of take-up before the stacking begins, which takes about another quarter-inch before the sear is released and the hammer drops. I’d estimate the pull weight to be 13 to 14 pounds at the end.

The SA pull has maybe 0.12 inches of take-up and some creep before breaking at an average of 4.46 pounds. The trigger’s shape and smooth face makes both pulls feel lighter. The extended safety doesn’t act as a hammer drop. So, shooters must take care when lowering the hammer on a loaded chamber. The slide stop and magazine catch are also extended and conveniently located for one-handed operation.

The steel slide features a matte black finish nestled down inside the polymer frame. This encloses the slide rails like a traditional CZ design. There’s also a rugged external extractor but no loaded-chamber indicator. The company also paired the small front sight post with a fully adjustable rear sight, and serrated it to reduce glare.

The grip frame has an extended beavertail to prevent hammer bite, and you’ll find finely checkered panels on the front- and backstraps as well as on the sides. The inside surfaces of the magazine well are chamfered for smooth reloads, and the front of the triggerguard is flat. Finally, the dust cover sports a long accessory rail for lights or lasers.

Range day turned out to be sunny and warm but windy. I wanted to get the velocity measurements out of the way before the wind speed increased. So, I set up my Oehler Model 35P chronograph and went to work with various loads from Black Hills, CCI, CorBon, DoubleTap and Federal. Some of the lighter 10mm loads didn’t give me the velocities I’d expected in the pistol- or carbine-length barrels. The fastest rounds recorded from the Hi-Point carbine, CorBon’s 165-grain JHPs, averaged 1,469 fps for 791 foot-pounds of energy (fpe) at the muzzle. Black Hills’ 155-grain JHPs came in second at 1,433 fps and 707 fpe. I think this kind of performance is adequate for taking medium-sized game like whitetail deer, coyotes and feral hogs.

The Hi-Point’s sights are removable, so I replaced them with an affordable Bushnell Trophy red-dot sight with four different reticle options. Then I placed a small silhouette target with a red oval aiming point at 50 yards. Even with the carbine’s somewhat mushy trigger, I still managed a five-shot group measuring 1.72 inches with the Federal 180-grain JHP load. The Black Hills ammo also gave me a 1.87-inch cluster. These were good results considering the wind gusted up to 35 mph at times.

To evaluate the EAA Witness P Match Pro’s accuracy, I fired five-shot groups in SA mode at 25 yards using a bench and sandbag for support. My best five-shot group here came with the CCI Blazer 200-grain TMJs and measured just 2.15 inches. Most of my groups were between 2 and 3 inches. 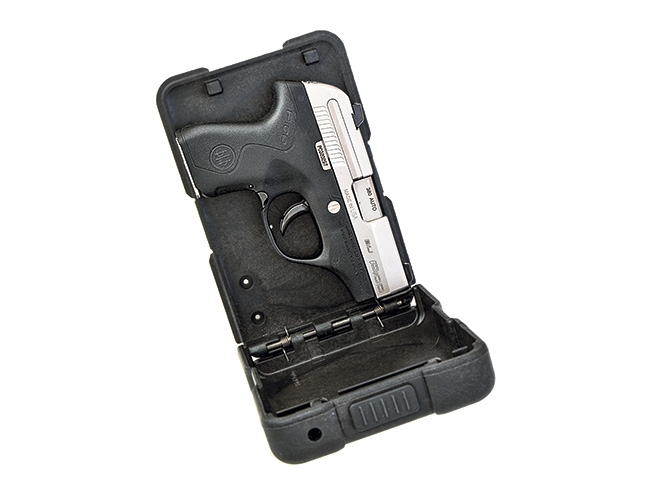 Then I set up a bad guy target 35 yards away and loaded the guns with a mix of cartridges. Using the carbine, I fired five rounds from a barricade position at 35 yards while standing. Then I moved up 10 yards, knelt and fired five more rounds. After that, I slung the carbine and transitioned to the EAA pistol. I advanced to 15 yards, took cover behind an impromptu barricade and fired two rounds from the left side while standing, two from the right side and then two more while kneeling. I then moved up to 7 yards and fired three double-taps.

Next, I did a “failure-to-stop” drill, reloaded and repeated. Finally, I moved up to 3 yards and fired six shots strong-hand only and five support-hand only from a point-shoulder position. The center-mass shots were in the “boiler room,” and my headshots were in the bridge of the nose. There were no malfunctions, and both firearms ran perfectly.

My son, Jordan, and I performed some more drills like this, and both guns never missed a beat. The Bushnell red-dot sight was right on the money. Also, the sights on the EAA pistol were easy to pick up in a hurry. The magazines ejected just fine, the controls worked well, and it was easy to call this range test a big success.

For more information about the Hi-Point 1095TS, visit hi-pointfirearms.com.