by Clint Thompson
in Guns, Handguns
0

If you know guns and history, then you could tell me what specific weapon was used to assassinate President Lincoln in 1865. But if you don’t know off the top of your head, here’s some trivia for you: John Wilkes Booth used a .44-caliber Deringer pistol to do the deed. The first derringer (we’ll get to the spelling discrepancy shortly) was the Philadelphia Deringer designed by Henry Deringer and produced between the years 1852 and 1868. This derringer was typically chambered in .41 and .44 caliber, and its small size made it a popular personal-defense firearm, as well as the classic villain’s weapon in Hollywood Westerns. 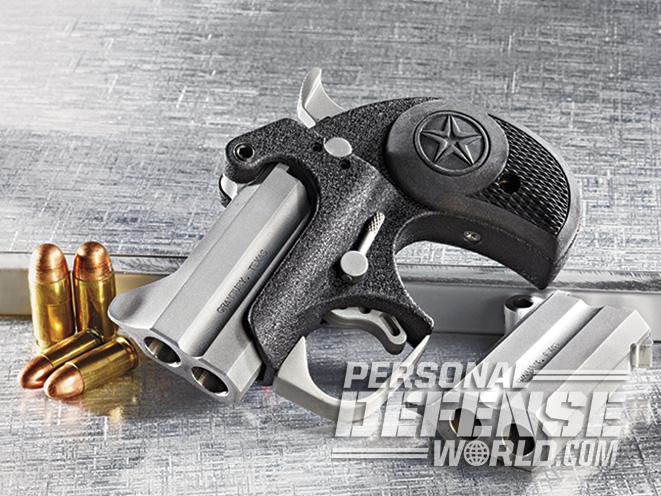 As Henry’s design became more popular, other manufacturers intentionally misspelled his last name “derringer” instead of the correct spelling, “Deringer,” to avoid trademark infringement. Then, the misspelling stuck, and now it’s the proper way to spell the word describing a small one- or two-shot pistol. The most famous and iconic derringer was the Remington Model 95 over/under, single-action pistol. This gun fired a .41 short rimfire round, produced between 1866 and 1935. Companies designed these pistols for close, self-defense range. They also made them cheaply, with a price of $8. And thus, the derringer solidified its place in handgun history.

Skip ahead a few decades to 1995, and Greg Bond, master tool an die maker, formed Bond Arms Inc. Over the next 10 tough years, Greg made his mark in the handgun world. In 2007, his brother, Gordon Bond, bought him out and became the owner of Bond Arms Inc.

Recently, I received a sample of Bond Arms’ “Old Glory” model double-barreled pistol — a derringer. (Gordon Bond, himself, prefers a double-barreled handgun.) When I opened the nice plastic gun case and picked up Old Glory, my first thought was, “This is a piece of Americana Art.” I found Old Glory to be just beautiful, as did my two lady shooters, Tammy and Kari.

As with all Bond Arms firearms, my sample of Old Glory is a high-quality pistol. In fact, the company expertly fitted together the parts to make a reliable self-defense weapon. I’m also very impressed with Bond Arms’ quality and engineering. Its double-barreled pistols are equipped with a crossbolt safety, retracting firing pins, a patented rebounding hammer, an automatic spent casing extractor and a spring-loaded cam lock lever. What does all this mean? It’s a very safe pistol.

Firearms are tools, like hammers, screwdrivers and pliers, for responsible people’s use. If you are irresponsible with a hammer, you could hurt yourself and others. Additionally, many homicides are committed with hammers and screwdrivers. Being a tool, companies generally design firearm for a particular use. The smaller single- or double-barreled pistols are no different. These types of firearms are, of course, designed for up-close personal protection. The questions is, in this case, can a two-shot pistol be an adequate combat handgun for defense? Let’s explore this concept with reasoning and without favoritism toward double-stacked multi-shot pistols.

People like small handguns because they can fit discreetly in a pocket or small belt holster. However, they are not designed for extended combat nor for the “spray and pray” defense. And they are definitely not designed for target shooting. If my friend Gridley was to yell, “They’re coming over the walls!” at me, I would not draw Old Glory. The derringer would be on me, but I would grab my AR for a mass assault. So, small handguns — particularly Bond Arms pistols — are designed to spring into action quickly at very close range, delivering one or two debilitating shots to a bipedal attacker. And when I say “very close range,” I mean 4 to 6 feet.

When I carry the Bond Arms Old Glory, I know its capabilities. I have, as with any tool, a particular use for this pistol. While traveling or just running to the store, I carry the Old Glory in its excellent cross-draw holster. This also conceals the Bond Arms two-shot pistol incredibly well. When sitting in a vehicle, or really in any environment, I can quickly access a handful of protection. 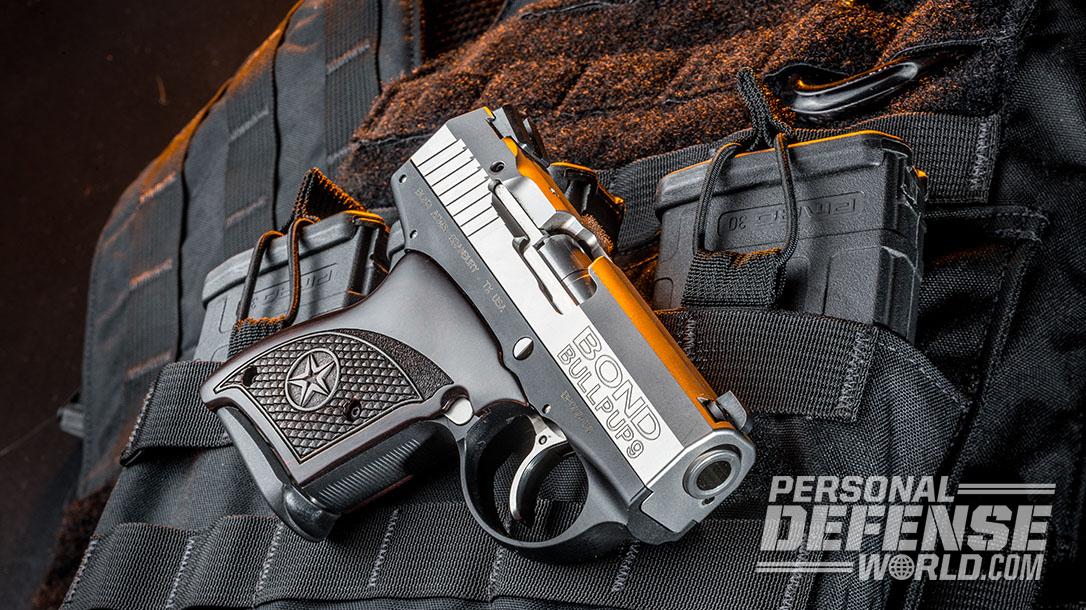 At the Oklahoma City Gun range, I set up my silhouette target frame and Champion metal reactive target. My friend Gridley started the shooting with the .410-gauge/.45 LC barrels on Old Glory at the Champion B27 silhouette target at 15 feet. After shooting 50 rounds of Hornady’s Critical Defense shells, we switched to the .45 LC Critical Defense. The .45 LC were more pleasant to shoot than the .410 shells; the likely reason was that the .410 rounds were one slug and two .35-caliber balls with a total weight of 262.5 grains. The .45 LC bullet weight was only 185 grains. We fired 50 rounds of the .45 LC with excellent results, but both the Hornady .410 and .45 LC Critical Defense rounds performed perfectly, giving us very decent groupings.

Easily removing the .410/.45 LC barrels and installing the .357 Magnum/.38 Special barrels, we fired the Hornady Critical Defense .38 Special. This was a very pleasant shooting experience. The .357 Magnum was about a third hotter but still didn’t generate too much recoil. In fact, from my ballistic precision chronograph, we learned the Hornady Critical Defense .357 Magnum 125-grain bullet traveled at an average of 1,239 feet per second out of the 3.5-inch barrels.

After firing 50 rounds of each caliber, we moved to shooting the Champion AR500 Pop-up target. This metal target is 20 inches by 6 inches at the widest point. At a safe distance of 15 feet, we fired several rounds of each of the Hornady Critical Defense calibers. We had no problem hearing the satisfying ring when the round struck the metal, and we watched the target go down and pop right back up.

Just because I was curious, I moved back to 20 yards and fired two rounds of the .357 Critical Defense. I then placed the sights at the top of the 8-ring and pulled the crisp trigger. Both rounds struck within the top 9-ring about 5 inches apart. I was pleasantly surprised.