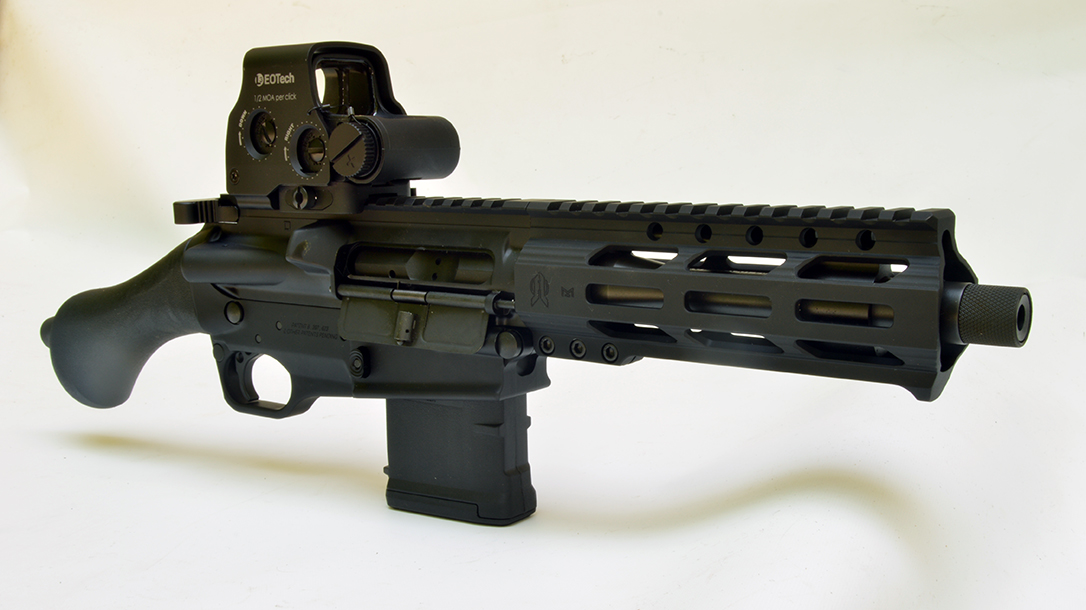 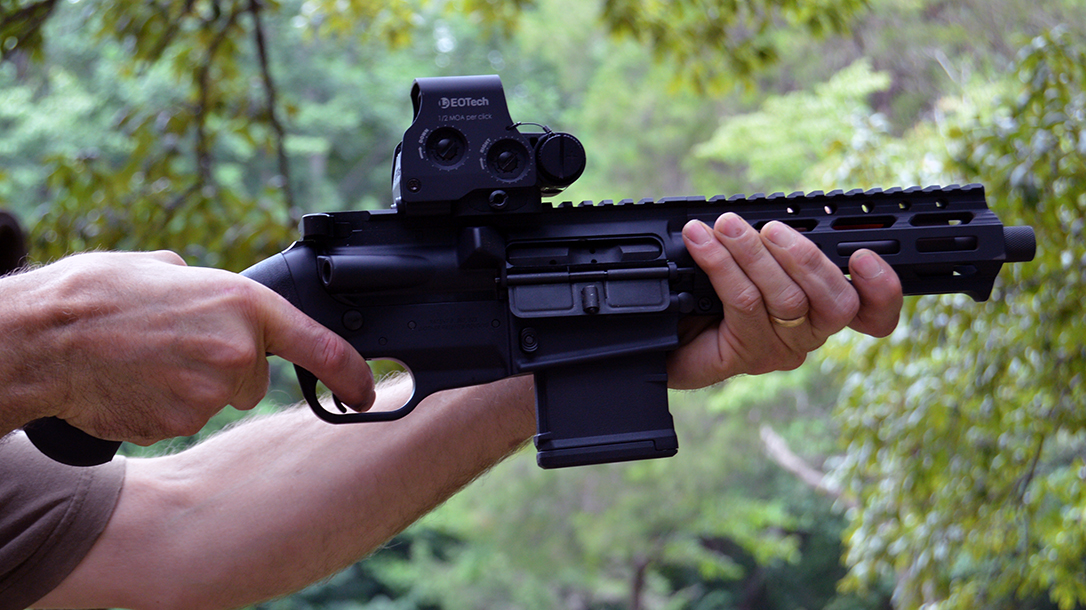 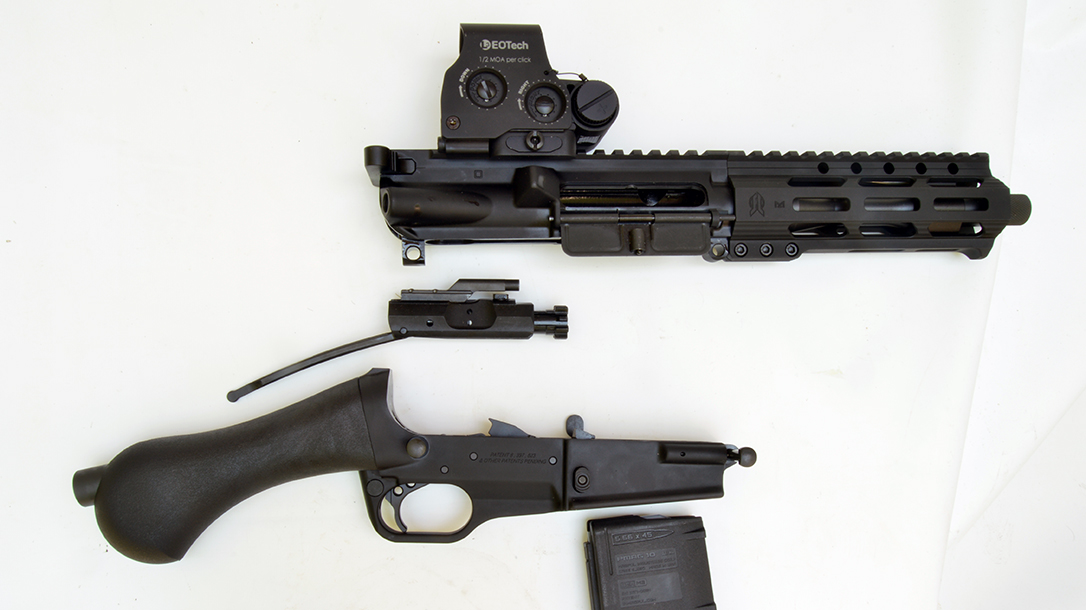 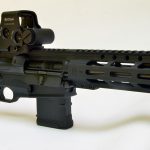 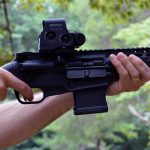 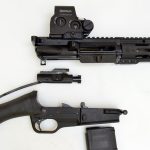 In the spirit of full disclosure, let me say I am somewhat enamored with this gun. Though it suffers from weight, balance and recoil issues, plus a couple uniquely its own, this gun is very compact, ruggedly made. In fact, I wouldn’t be reluctant to hit someone as hard as I could with it, and most importantly, it is startlingly accurate. However, before I realized its merits, it charmed me with its sci-fi ambiance. If the FightLite SCR Pistol, also known as the Raider, had been around in 1976, it would have surely made the big screen in Star Wars. 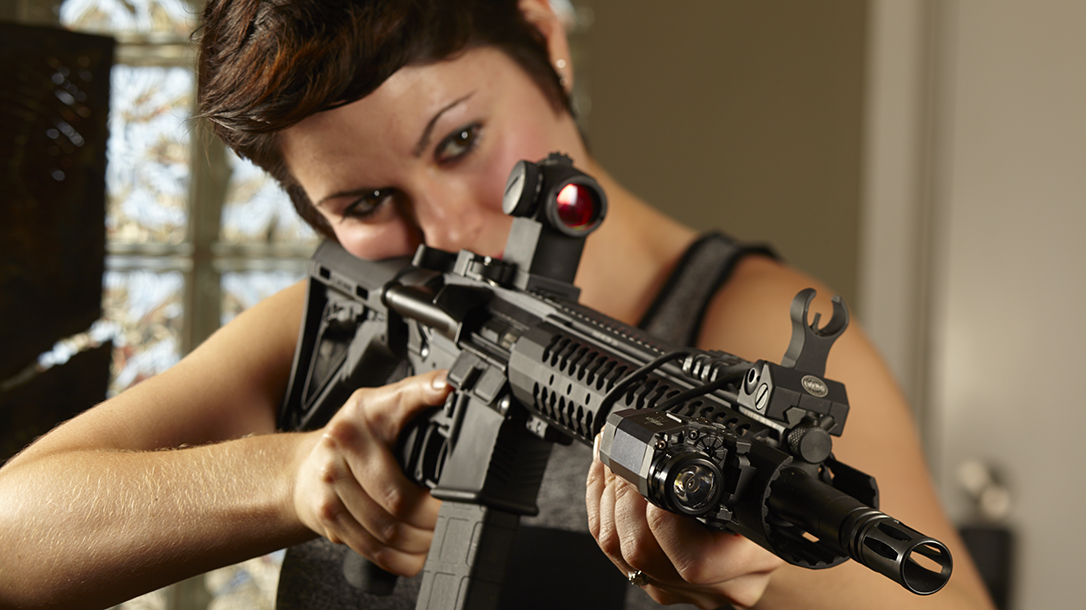 So, lacking prop weapon responsibilities in a big budget space opera, what does one do with the Raider? FightLite markets it as delivering “overmatch performance against common pistol-caliber handguns and shotguns at extended shooting distances.” This it surely does. The large-format handgun niche is somewhere between the pistol and carbine, just like its select-fire military cousins the CAR-15 and Krinkov. A colorful friend of mine calls them “Oh shit! Here they come!” guns. These guns offer close-range, high-capacity firepower, combined with the superior stopping power of a rifle caliber. And “overmatch” is what you’d want if you were confronted by a gang of home invaders, attacked in your truck by violent rioters or boarded by Somali pirates.

The Raider is a pistol version of FightLite’s Sport Configurable Rifle, originally made and marketed under the ARES Defense Systems brand. Fightlite offers the Raider only in 5.56mm and 300 Blackout chamberings. Also, it dispenses with the typical AR buffer tube system and bolt in favor of a much more compact and light design.

The gun uses a bolt carrier that is half as long as a conventional AR-15’s, and comes with a hinged tail pinned to the back. The tip of this tail slips into a detent at the top of a spring-loaded recoil piston angled downward into the grip. It might look a bit fragile compared to what we’re used to seeing in rifles. However, the Remington 1100 shotgun has used this design to provide over 50 years of solid performance. (By the way, the reliability criticism the 1100 gets is from deterioration of rubber O-rings in its gas system, not the strength of its recoil mechanism.) The SRC bolt is identical to a normal eight-lugged AR-15 bolt. Also, the lower receiver and bolt carrier group can work with any AR-15 upper.

Like the FightLite SCR rifle, the pistol has a propriety fire control group design that was recently improved for a 4.5-pound pull with only a little creep. The unique SCR hammer has wings on either side. This increases surface contact with the lower receiver. It also eliminates the danger of cracking the aluminum receiver wall when the hammer is accidentally dropped. That’s a thoughtful feature. (I’m cringing less already.)

Every SCR also uses a slide-out bolt catch that’s a precisely machined marvel. But I worry about losing it while field-stripping the gun, which involves pushing in two pins like a typical AR. Shooters can pivot the Raider open on the front pin. However, they can’t close it that way because the tail on the bolt won’t line up with the recoil piston. Reassembly requires having both pins out.

The magazine release and bolt catch are in their normal AR positions. The safety is a sliding push button at the rear of the triggerguard. The Raider comes with a conventional charging handle. Also, the safety is particularly well suited to this design. The other operating controls are where they are so there’s no use complaining that you can’t reach the magazine release button without breaking your shooting grip. Operating the charging handle needs to be done thoughtfully. In fact, users must pull straight back and not upward and back. I think carelessness here could bend the handle. The SCR Pistol cries out for a side-mounted charging handle, ideally a non-reciprocating one, and perhaps some owners will opt to modify their guns in this way.

The main contribution FightLite brought to the table with the original SCR was its compact, traditional sporting rifle form. They took a naturally clumsy and excessively large firearm like the AR-15 and made it graceful. The SCR rifle’s compactness transfers over to the SCR Pistol, too, but with a bit less grace.

On the plus side, it takes AR-15 magazines, so it has a lot of potential firepower in a compact size. The muzzle is threaded for a brake, flash suppressor or sound suppressor. The gun is also exceptionally well made on forged receivers with a free-floating, nitrided barrel and a ventilated aluminum handguard that incorporates a hand stop at the front and plenty of M-LOK slots as well as a full-length Picatinny top rail. It also has a sling swivel attachment point on the butt of the grip and another one cleverly installed on the upper receiver.

On the negative side, the control layout isn’t particularly ergonomic, though it is at least very familiar. It also seems to lack any obvious provision for the attachment of an arm brace. This means that owners who fancy one-handed shooting better hit the gym or at least get a $5 pair of barbells. Loaded with 10 rounds, the Raider tops 4.5 pounds.

Trigger Time With the Fightlite Raider

The SCR Pistol doesn’t come with sights, so I experimented with an EOTech HWS and a Crimson Trace CMR-206 Rail Master green laser. Both mounted on the top rail. I used the HWS for accuracy testing from the bench. I feel the ease of use a HWS offers helps to compensate for the clumsy handling characteristics of a large-format pistol when trying to make a precise shot. Instead of struggling with all that weight hanging out in front of my trigger finger to get and maintain a sight picture and get on target before my arm strength ebbs, I can concentrate on getting the right part of the reticle on the target.

As a practical matter, I quickly confirmed with my first few shots that it makes no sense to try to shoot the SCR Pistol, or any gun like it, unsupported with a standard two-handed pistol hold. The SCR was easier to hold up and shoot with my supporting hand holding the front handguard and resting against the magazine well. More so than standard rifles and pistols, the SCR’s accuracy benefits from a solid rest on a tree, car door, fence or whatever you can find to steady it.

The SCR’s free-floating barrel showed that it could outshoot most regular big-bore handguns at 25 yards when stabilized. The combined average five-shot group of all the test ammo at 25 yards was less than 2.55 inches, firing from a bench. I think this is accurate enough to peel a hostage-taker off a captive. Extrapolated to 50 yards, this kind of accuracy is adequate for taking deer. However, a gun like this won’t shine when it comes to tracking a moving target. The SCR’s significant muzzle jump also precluded fast follow-up shots. The recoil wasn’t in any way painful. But once that muzzle starts moving, it has a lot of inertia to get under control before you can get on target again.

I speculate that the SCR’s relatively light recoil impulse has something to do with the reduced length and reciprocating mass of its lighter and smaller bolt and buffer system, the downward direction of the recoil impulse and the substantial weight hanging out in front of your trigger finger. 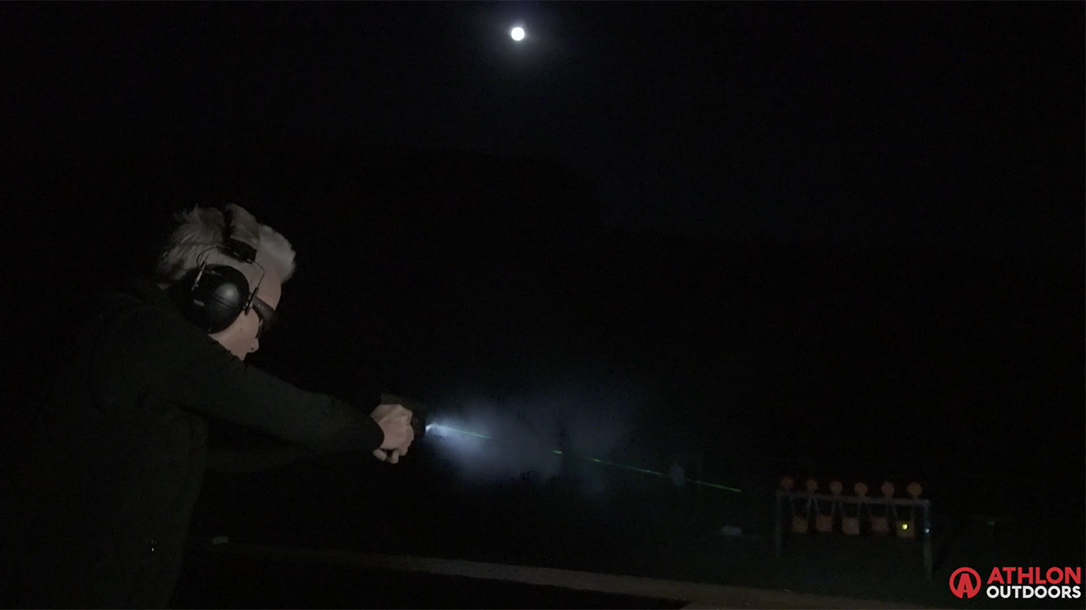 While much harder to shoot fast and straight than a normal handgun, the SCR was capable of better accuracy than most at longer ranges when properly steadied on something. Finding a nice solid rest might not be practical in a more fluid defensive situation. So, I wondered how the SCR could be best employed for close-in defense against moving targets. The gun is much more controllable in rapid fire when shot from the. A HWS is useless here, though, so the Crimson Trace laser helped in this regard.

Experimenting at 7 yards surprised me. I thought I had the SCR leveled at the center-mass of my B-27 silhouette, but I tended to point high. I was actually aiming at the head of the silhouette instead of its belly! This might be because my hand was instinctively levering the rifle-style grip downward like a pump handle. A pistol grip might have corrected that tendency since it inclines the hand upward. However, that’s not how they build the SCR Pistol. Fortunately, the highly visible green laser kept me aware of my point of aim on the target and allowed me to compensate for my poor natural hold.

Set up with the laser, shooters can fire the Raider very rapidly and effectively from the hip. In fact, if your use scenario was strictly close-in defense, a red or green laser alone would be adequate. The greater brightness and range of the more expensive green lasers make them a better choice for shots beyond 25 yards in bright light and hunting under 100 yards. The laser is also less expensive, lighter and more compact than an HWS. Perhaps most importantly, lasers are also very sci-fi and thus a natural fit for the Raider. For more information on the Fightlite Raider, please visit fightlite.com. 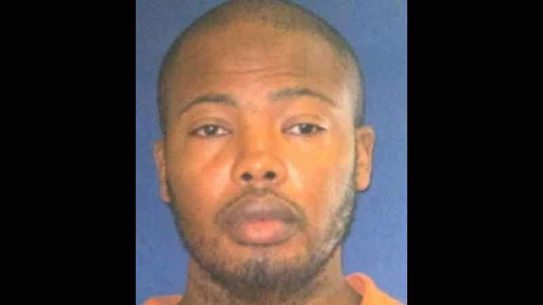 After discovering an intruder in the early morning hours, a North Carolina homeowner shot...