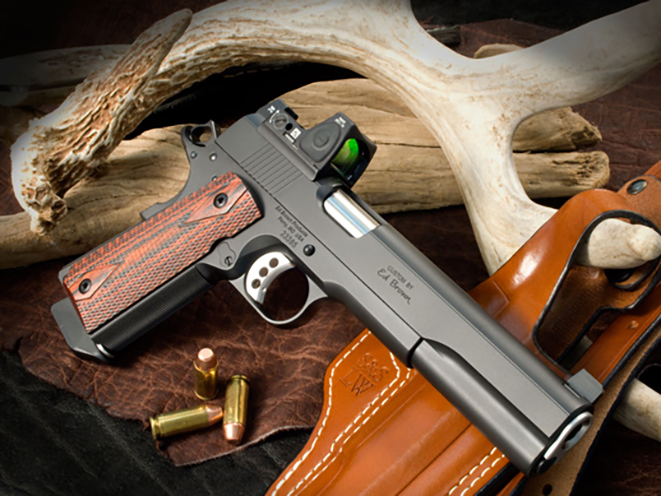 With the SRC, Brown recognizes the popularity of suppressors and also the increase in the use of red-dot optics in personal-defense handguns. I asked John May, Brown’s marketing director, about the driving force behind the new model.

“Part of our legacy has been stepping outside the box to offer our customers unique and timely pistols,” he said. “One of the early examples is the Kobra Carry. If you think about it, the SRC is just us continuing to live up to our legacy. Also, with the company celebrating our 50th year in business, the SRC is just one in a line of several pistols that will pay tribute to that history.”

The Road So Far

The company’s story is one of struggle, success and dedication. In 1968, Ed Brown opened Brown’s Gun Shop as a part-time gunsmithing operation. Ed became a world-class gunsmith and a ranked shooter in IPSC and other competitions. In 1991, the American Pistolsmiths’ Guild named Ed Pistolsmith of the Year.

Through the years, Brown grew the business into a highly successful enterprise. To many pistolsmiths, Brown parts became the standard by which others were measured. Brown’s secret was that his employees were machinists and engineers. They understood specifications and taking a part from an engineer’s drawing to production. Attention to detail, maintaining tolerances and efficiency were in their DNA. They manufacture every component to exacting tolerances that can only be attained through dedicated engineers using quality CAD/CAM processes. That allows Brown to design its own parts and improve on many original parts. Brown engineer parts for performance.

The Ed Brown way is the roadmap for the company’s success. In 1992, Ed incorporated the company and formed Ed Brown Products. The company has more than $15 million invested in CNC capability to ensure vertical integration. This ensures that the company does not depend on outside vendors for critical components. Ed Brown pistols are void of any MIM or cast parts. The company backs every part on every pistol with a 100-percent lifetime warranty. That’s not just a marketing slogan; its printed on every owner’s manual and shown on the company website.

In fact, they machine frames and slides from forgings on multiple fifth-axis CNC machines. Additionally, the company CNC machines the hammers, sears, disconnects and other internal parts from bar stock.

“Our conformance is verified on a coordinate measuring machine that is so sophisticated, approval was necessary from the Department of Defense before it could be purchased and installed,” Travis Brown, Ed’s son, said.

The company even has a Swiss screw machine to make stock screws in house. Also, master craftsmen assemble every pistol to ensure each meets the standards set by Ed.

In 2010, Ed retired, turning the business over to his sons, Travis and Wade. Travis has spent 20 years in the business in sales, operations, finance and other management roles. He holds an MBA, is a CPA and was deeply involved in growing the business the past 12 years. Wade has been with the business since 1998 and has an extensive background in engineering and gunsmithing. As Brown’s chief gunsmith, he has been heavily involved in research, development and new products. He’s also responsible for overseeing all production, training and quality control.

The new Ed Brown Special Forces SRC is the next iteration after the 5-inch Government Model. It’s a true Commander-style pistol with a 4.25-inch threaded barrel and traditional bushing. The frame and slide, along with all other components, are machined in house at Brown’s facility in Perry, Mo. The slide features front and rear cocking serrations and ball end cuts that are perfectly flush with the end of the dust cover. Also, the top of the slide is flattened and serrated with 40 lines per inch. The SRC slide features a machined French border and two flutes that are machined in the top of the slide, forward of the ejection port. This gives the SF SRC a unique appearance. The slide has also been machined for the mounting base for the Trijicon RMR II. Brown finishes the slide with a set of high-profile Trijicon suppressor sights with tritium inserts.

The frame of the SF SRC model is high cut and features a nicely fitted, evenly contoured beavertail with a speed bump and Brown’s legendary Memory Grooves. The single-side extended thumb safety is serrated and contoured to lie parallel to the slide when in the off position. The ledge-style slide stop is serrated to match the thumb safety. A three-hole match trigger has an adjustable overtravel stop. The gunsmiths also applied Brown’s signature Chainlink III texture to the front strap and mainspring housing. Chainlink III consists of offset rows of small round dimples that are machined in a 21-line-per-inch pattern. Another nice touch, often overlooked, is the finely checkered magazine-release button. The stocks on the SF model are gray G-10 with a snakeskin pattern manufactured by VZ. Each Brown pistol comes with two nine-round OEM magazines with a large bumper pad.

The magazine well on our sample pistol is Stan Chen’s Gen2, which is a new addition to Ed Brown’s parts line. The Gen2 is a one-piece mag well/mainspring housing machined from bar stock. The design allows for the widest possible mouth without any increase in width or overall height of the pistols. They accomplish this by shortening the frame by 0.3-inch before installation. The mag well also features Side Impact Reinforcing Tabs that fit against the sides of the frame. The two tabs provide lateral support and prevent the mag well from twisting. In fact, this is one of the best designs on the market and makes speed reloads extremely easy, even during stress.

The most prominent feature on the SRC is the Trijicon RMR Type 2. Trijicon redesigned the new Type 2 RMR and upgraded electronics to increase reliability. Trijicon machines the body of the Type 2 from 7576-T6 aluminum and designed it to absorb impact and divert stresses away from the lens. Features also include a button lockout, battery-conservation mode and the ability to mount the optic on multiple platforms.

At the range, I found that rapidly indexing the RMR was easy. In fact, it was significantly easier than on my Glock MOS or several other red-dot-equipped pistols I’ve shot. I attribute this in part to grip angle of the 1911 and my many years running various 1911 pistols. The Trijicon Suppressor sights provided an excellent sight picture for initially indexing the red-dot and use as backup iron sights. The trigger on our test pistol broke cleanly at 4.5 pounds. Also, the Chainlink II texture allowed for a positive purchase without the abrasiveness found with some textures.

We tested the SRC with five loads ranging from 115 to 147 grains. The pistol ran flawlessly with every round we tried, with and without a suppressor. Velocities averaged 1,291 fps for the SIG V-Crown 115-grain JHP to 985 fps for Super Vel’s 147-grain FMJ Hush Puppy load. Shooting from a bench rest at 25 yards, groups averaged .75 inch to just more than 1.5 inches. I found I was far more confident shooting groups with the RMR than with iron sights. The advantages of the red-dot were evident when I shot a .75-inch group with no flyers.

I shot all groups with the AAC TiRant 9S suppressor installed. The TiRant 9S is a shortened version of the TiRant 9 originally designed for a military special-operations unit. The 9S is 5.07 inches long and 1.38 inches in diameter, and weighs 7.6 ounces. Although reasonably effective when shot dry, AAC designed the 9S to be shot wet for maximum effectiveness. In tests conducted by Silencershop, the unsuppressed sound signature for a 9mm 147-grain subsonic load was 156.7 decibels. When it tested the TiRant 9S dry, it recorded a 15.1-decibel reduction, or an average of 141.6 decibels. In wet configuration, the 9S is capable of a sound reduction of 27 decibels. Readers should note that AAC has discontinued the 9S and replaced it with the TiRant 9M. The 9M is a modular suppressor that lets you configure it in 8- or 5.84-inch lengths.

With or without the suppressor, the SRC was a joy to shoot. The all-steel gun absorbed the recoil of the 9mm rounds. However, the positioning of the RMR might present compatibility issues with some holsters. I found the SRC would not fit in my classic Sparks’ 55BN but fit into my Raven Phantom Kydex rig. The Chen magazine well also made reloads hard to miss, even in the dark. The overall fit and finish lived up to Brown’s reputation for quality and attention to details.

You might ask, “What makes the Brown SRC different from other suppressor-ready 1911s on the market?” First, the company manufactures every component of the pistol — with the exception of the magazines, springs and stocks — in house. This lets Brown be in full control of the manufacturing process and quality control. Second, the company is so confident in the quality and durability of its pistols that it offers a limited lifetime warranty that’s one of the best — if not the best — in the industry. Finally, 50 years of experience have allowed the company and its products to mature, making the company more efficient and the products better.

Brown recently revamped its website and now offers the ability to spec out your dream pistol online. In fact, the company offers more than 100 options that provide a virtual smorgasbord of features and options. As May said, maybe it’s time to “take another look” at the lineup of Ed Brown products. For more information about the Ed Brown Special Forces Commander, visit edbrown.com. 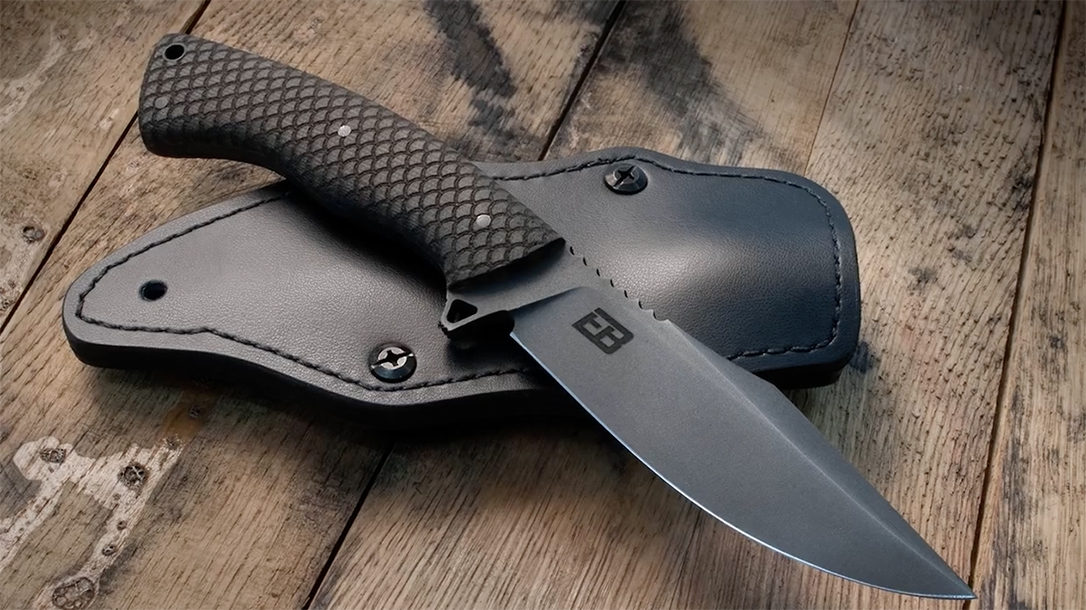