by Fred Mastison
in Guns, Handguns
0

As I sat at my desk reviewing “new” guns for upcoming projects, my eyes began to glaze over. My curmudgeonly ways began to surface as I mumbled things such as, “A new color doesn’t make it a new gun,” and other pre-coffee 5 a.m. thoughts. This continued until I saw the name Caracal. It’s a name I know and enjoyed briefly. Could it be? As I read on, my day improved, because the company was back with some serious products, including the Caracal Enhanced F pistol. 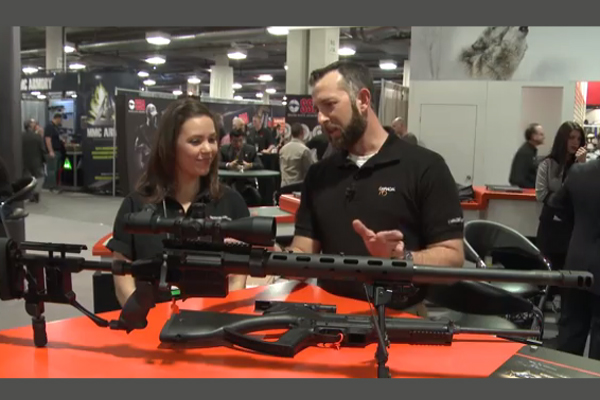 Caracal might be familiar to some of you, as it made a solid entry into the handgun market a few years ago. The short version of that story is a potential design issue led to a full recall. That made me do a double take as I listened to a brief rundown on the history. Caracal knew losing inventory would be hard on gun shops, so it did something novel. When the company recalled the guns, Caracal bought them back at MSRP, not the lower wholesale price the gun shops originally paid. To me, that spoke volumes about the company.

Fast-forward to today. Caracal has made changes to its pistol lineup and the company as a whole. Once completely run in Abu Dhabi, Caracal now has an established American division. Jeff Spalding, the general manager of Caracal USA, elaborated on the company’s new direction. “Caracal USA is the U.S.-based subsidiary of Caracal International, with the headquarters located in Boise, Idaho. We are here to build American-made products for the American people, staffed with the best minds in the industry to provide state-of-the-art firearms that are unmatched in reliability, durability and performance at a price point that makes owning a battle-tested, proven firearm a realistic opportunity for the commercial buyer, as well as allowing our underfunded and overworked law enforcement agencies to purchase a patrol rifle that they can depend on at all times that will not break their budget.”

Caracal currently manufactures the Enhanced F Pistol and some nice AR-platform rifles, with more products on the horizon. My focus is on two versions of the Enhanced F pistol.

World-renowned firearms designer Wilhelm Bubits and a team of international engineers designed the original Caracal Model F pistol at Caracal International. Bubits’ portfolio includes Steyr’s “M” series pistols and many others. The Enhanced F is a polymer-framed, striker-fired 9mm handgun designed for self-defense, concealed carry, and military and law enforcement use. In fact, it contains only 53 parts, a design that makes it a workhorse.

One of the first things you notice is the gun’s exceptionally low bore axis. The benefits of this include reduced felt recoil and muzzle rise. The barrel is 4 inches long, which makes it slightly smaller than most other full-sized handguns. It has a magazine capacity of 18 rounds. So, with one in the chamber, you’ve got 19 rounds on tap in a lightweight, extremely intuitive and manageable platform.

The gun’s ergonomics are exceptional. In fact, the grip fits your hand like it’s an extension of your body, and the grip angle is natural and comfortable. The gun is designed for fighting, so the barrels are SAAMI proof-tested for +P ammunition. All of the metal parts also receive QPQ nitriding with an enclosed post-oxidizing surface treatment to protect against rust and wear and increase durability.

The Enhanced F also features a redundant safety system that includes an integrated trigger safety, a firing pin safety and a drop safety. The ambidextrous magazine release has solid texturing and is placed for instinctual operation. Wrapping it up is an accessory rail to facilitate the attachment of lights and lasers.

The sights on the models represent a fork in the road. The gun most similar to the original Model F pistol has traditional three-dot sights, and night sights are optional. The guns that have received the most buzz, however, are the Enhanced F pistols equipped with Caracal’s Quick Sight System. This targeting setup is designed for fast engagements from close contact to 15 or 20 yards. Instead of being at the back of the slide, the rear sight is machined into the slide just in front of the ejection port.

This places the front and rear sights on the same focal plane. Our eyes can only focus on one thing at a time, so by having them on the same plane, the front and rear sights are in complete focus in fractions of a second. According to engineers at Caracal, they designed this system for short-range engagements, but the system remains accurate out to 50 yards with proper shooting fundamentals. But, essentially, the company designed the sights to shine in real-world fighting distances.

As always, things can look good on paper, but I’m practical and wanted to see the Enhanced F in action. Caracal sent me two Enhanced Fs for testing: one with standard sights and another with the Quick Sight System.

The mechanical aspects of each gun were identical. I found their triggers to be smoother out of the box than those on most striker-fired guns. They broke at about 5 pounds, making them similar to most other guns in this category. Their resets were also a bit longer than I’m accustomed, but they were butter-smooth.

The low bore axis isn’t just a talking point. The guns had little noticeable recoil, and the muzzle flip was also negligible. In the hands of serious shooters, you would be hard-pressed to see much muzzle rise. This all translated to exceptionally fast guns.

These guns are also well designed, with an attention to keeping everything snag-free. Enhanced Fs would make solid concealed-carry guns, as each gun drew easily without any hang-ups or snags. They’re also easy to manipulate. The location of the slide release is also no accident. It was easy to use and should be a role model to other companies.

I wanted to run a variety of ammunition through both guns to get as much of a feel for them as possible. So, Federal, Hornady, Sig Sauer and Remington provided a smorgasbord of ammo. The only stipulation was that I wanted it all to be defensive loads. These guns are presented as fighters, so they would need to run fighting rounds.

And run they did. In fact, I’m pretty sure the Enhanced F would have easily run rusted, steel-cased, bargain-basement ammo. I had zero malfunctions during the 500-round tests. Accuracy-wise, I shot what I consider good groups at pace. These aren’t 50-yard bullseye guns, but they also weren’t designed to fit that role. I was able to keep my ground at around 1.5 to 2 inches while shooting at pace. I didn’t shoot any groups slowly from a benchrest because that isn’t what these guns are built for. The company didn’t design them to shoot minute of angle. They’re built to shoot “minute of man,” and they do it well.

I dedicated much of my range time to the pistol with the Quick Sight System, which has a pretty short sight radius. Although the laws of physics tell us a longer sight radius is preferable for long-distance shots, the upside to this design is speed in gunfighting distances. However, even with a short sight radius, I was able to shoot 2-inch groups.

The sight design is also smooth, which gave me a moment of pause. Although this is great for concealed carry, it can be detrimental if you need to rack the slide one-handed. Fear not, however, as Caracal had the foresight to cut a small shelf into the rear of the slide. This is designed as a catch point for racking the slide one-handed if needed. This is just another example of how these pistols are built as fighters. I left the range disappointed that I didn’t have more ammunition, because I was really enjoying myself.

Back With A Vengeance

It’s rare that a gun leaves the marketplace and comes back again. In fact, the firearms world is rife with good tries and maybe-next-times, as new companies do their best to bring new blasters to market only to see them end up as footnotes in an obscure book on a dusty shelf. Because of that, I was genuinely surprised to see Caracal reemerge after a hiatus. I was a fan of its first pistol years ago and eagerly dug into the information on its reemergence.

“All of our international operations manufacture the same baseline products, which include pistols, direct-impingement and gas-piston-operated rifles, precision weapon systems for DMR and sniper applications, as well as submachine guns,” Spalding said.

In other words, this isn’t Caracal’s first rodeo. It has a solid team, and its decision to establish an American operation is brilliant. Caracal is back, and the firearms industry is better because of it. For more information about the Caracal Enhanced F pistol, visit caracalusa.com.