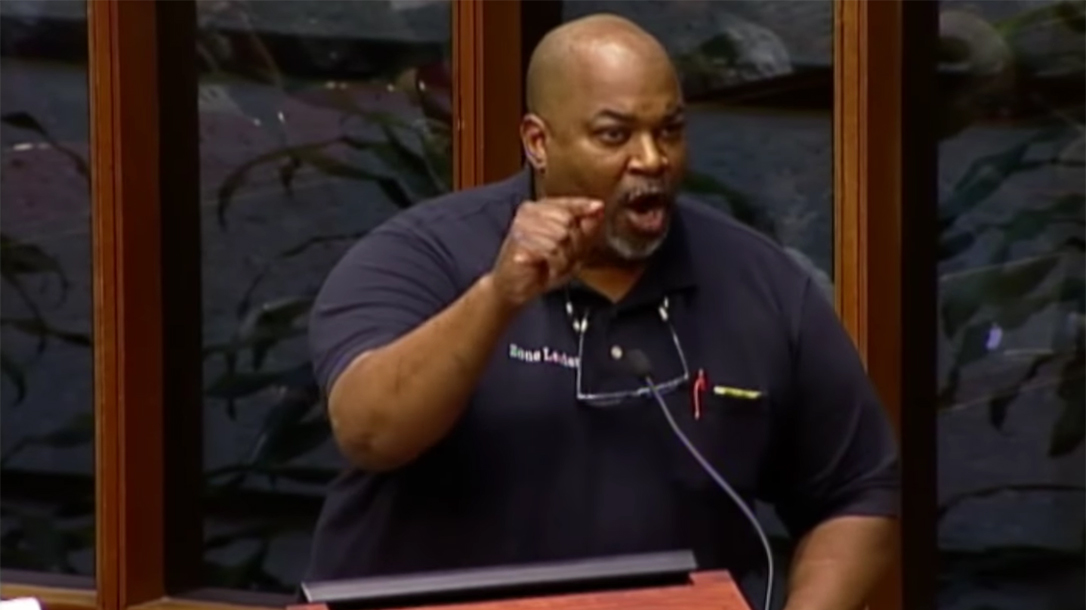 By now, most Second Amendment supports are familiar with Mark Robinson. The pro-gun speech he gave in April 2018 at a Greensboro, N.C., City Council meeting went viral, not just for Robinson’s intensity, but his factual statements. It was an incredible speech for responsible gun owners everywhere. We ran into Robinson at the 2019 SHOT Show in Las Vegas and started talking about his speech. We asked if he’d give us his first-hand account on what exactly transpired on that faithful April day. He gladly accepted.

We’d like to introduce Mark Robinson as the newest writer for the Athlon Outdoors network. Here’s his synopsis on the speech that saw him cast into the Second Amendment spotlight. 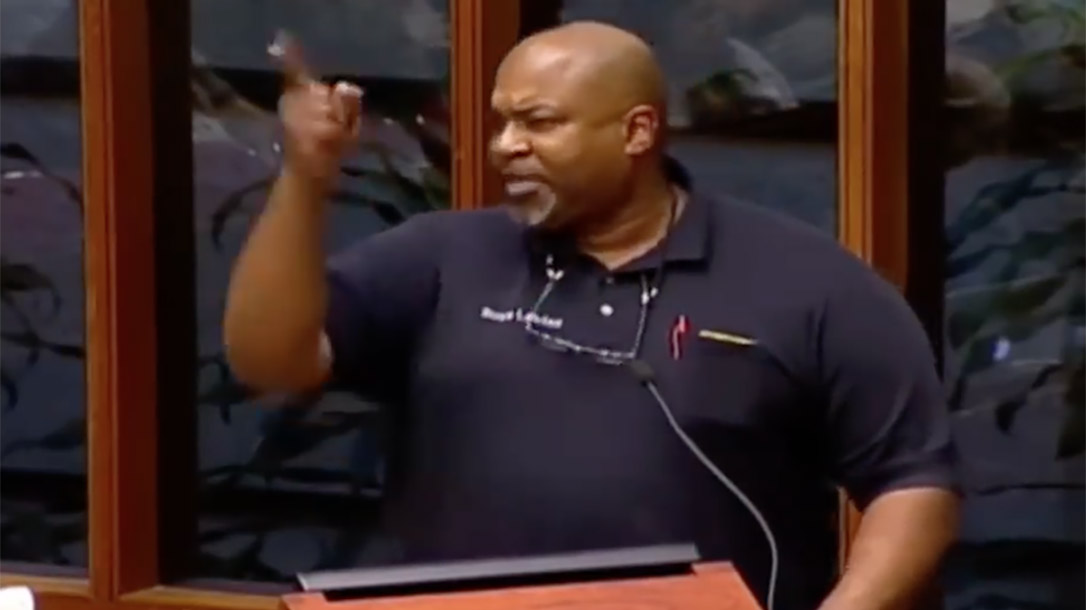 On April 3, 2018, I was in the midst of a conflict; a conflict between two ideologies and a conflict within myself. The ideologies at odds were those of the “pro gun,” Second Amendment supporters and the “anti-gun,” gun control supporters. The contentious struggle between these groups takes the form of many arguments, which are presented everywhere from the family dinner table to the vast expanse of social media to the halls of government on every level.

The conflict within myself was much simpler. Should I join the fray or not? For someone like me it seems the choice would be obvious. I certainly had strong opinions on the subject. For years I had made my case about the absolute necessity of our Second Amendment to family and friends from the sanctuary of my dining room. I had posted witty memes lambasting the “gun-grabbers” and their minions from the safety and comfort of my computer chair. And I had pondered the arguments on both sides in the solitude of my mind.

But then here it was — the place where sanctuary, safety and solitude were not possible. It was time to decide if my beliefs were worth standing for or whether the cost of standing for my beliefs was to high; and it was time to do so in public for all to see. The decision I made that evening would change the course of my life and teach me some important lessons. Those lessons being that life prepares us for these moments, and that often times the only thing that stands between the ordinary and extraordinary is stepping up with courage and stepping out on faith.

It also taught me that nothing compares to being present. It doesn’t hurt to be propelled by passion and full of fury.

I trace my preparation for April 3, 2018, back to my childhood. Growing up with five siblings, I was introduced early to the word “fairness” and the concept thereof. At the table, on the playground, watching television — no matter the setting, whenever there was a question, the answer was always “what is fair?”

My mother raised each us with a strong sense of fairness. We, in turn, enforced the rule of fair play with each other. We carried this belief with us into our daily lives. I, for one, began to see everything through the lens of “fair” and “unfair.” I found myself constantly questioning the rationale of those in authority and began to examine their integrity and impartiality. Over time, questioning authority became a way of life for me. Not in the rebellious sense, but in deeply personal sense.

In those early days, teachers were the ones I critiqued most. In fact, I based my like or disdain for my teachers largely on whether they were fair or unfair in their dealings with my peers and me. I am sure my immaturity caused many mis-judgements in those days. However, it is suffice to say that from an early age I was being prepared to stand up for what is right; I know this because of the deep sense of satisfaction I felt when I witnessed justice, and the outrage that would pierce me when I witnessed the opposite.

As a young man the questions I faced as a child stood front and center in my life. As a leader in Junior ROTC in high school, I was called on to establish and enforce a code of conduct for our ranks. Here again, my primary goal was to be fair. Upon joining the U.S. Army, my understanding of fairness waxed greatly. The main thing the Army taught me in this area was that in order to be right, you had to be right. In other words, you had to follow the rules. Most of time this premise worked. Sometimes it did not.

These themes continued in the civilian workforce after the Army. As a leader in the workplace “what was fair?” was paramount in my conduct, both with my subordinates and my superiors. I could mete out or receive correction as long as it was equitable. I had no problem with discipline, as long as it was carried out with integrity. But it was at those times — when the rules had been followed and the job completed and I still received unfair treatment — that I became impassioned and sometimes furious. Little did I know that it was those times that would further build my passion for doing what is right. I also learned how to focus that passion and properly direct my fury.

News Out of Parkland

Fast forward to 2018. I was getting ready for work. It was about 5 a.m. A news story on television caught my attention. The Greensboro City Council had declared its intention to cancel the annual “Gun and Knife Show,” which is held at the city’s coliseum twice a year. The reason given for the proposed cancellation was “in light of the event in Florida.” In this instance, “the event” was the tragic shooting at Marjory Stoneman Douglas High School in Parkland, Fla., in which a lone gunman murdered 17 people.

Mass murders, such as the one in Parkland, have always struck me hard. Not only are they savage and evil in nature, they are a form of unfairness that is mind numbing. Imagine, minding your business, going about your day, bothering no one, only to be cut down by a madman. The thought is truly horrific.

I had made plans to attend the Greensboro gun show and purchase an AR-15, the type of rifle used in the shooting. Ironic? Yes. Did I feel guilty? No. For as sure as I felt the tragedy of the murders, I also felt a sense of injustice that our elected officials would consider punishing me, and thousands of others, for the actions of a single criminal. To me it seemed to give the murderer more power. This criminal had taken the lives of 17 Floridians. Now our council was ready to allow him to take the rights, privileges and livelihood of a wide swath of law-abiding North Carolinians. Needless to say, it did not sit well with me.

About one week later, all seemed well. The announcement had been made that the Greensboro City Council did not have the authority to cancel the gun show; that authority lay only with the coliseum director. However, as I got dressed for work again at about 5 a.m, the news caught my ear once more. The city council, having its cancellation plan thwarted, had scheduled a special meeting to discuss “gun violence.”

Being politically savvy, I understood the code words and immediately knew what the council was attempting. They wanted to fill the chamber with high school and college students who would deliver heartfelt pleas for gun control intended to strike the conscience of the coliseum director and pressure him into cancelling the gun show. Incensed is an understatement of how I felt.

I took this pursuit by our council to cancel this show as a personal attack. As a citizen who respects our government and the rule of law thereof, I took it very personally when that entity sought to execute its wrath upon me for the actions of a criminal. I was also torn. The meeting was that very evening — April 3, 2018 at 5:30 p.m. I had to be at work at 6 a.m. I did not get off until 4:30 p.m. But I had to do something.

And so the stage was set. I obsessed internally over the issue all day at work. Should I go? If I go, should I speak? Could I make a difference? Would I hurt the cause or help it? In the end, I decided to go.

Now I had “talked” endlessly about gun rights on social media. I had vehemently made a strong case for preserving the Second Amendment in cyberspace. I had lambasted the gun control activists and politicians in the digital arena. If I backed out in person, I’d be a hypocrite. However, not having the time to prepare, I decided not to speak. I went to support those who were speaking. Fate had other plans.

As I sat in that chamber and listened to the nonsense being spewed by the anti-gunners, I could feel again the outrage that pierced me as a child. My fury rose with every speaker, every ridiculous assertion, every race and sex baiting turn of the tongue. But I had learned my lessons. I gathered myself and decided to speak.

I rose from my seat and signed my name to the list of speakers. As I stood waiting my turn, I thought to myself, “What will I say?” It was at that moment that I let go. I knew God led me to that podium and I knew I received my passion from Him.

When I spoke, the deeply planted seed of fairness and justice and the passion that it grew from sprang forth. What followed was a declaration intended to speak for all those who had no platform or could not find the words. It was intended to declare we are here, we will be heard. It was the truth many had longed to hear. And it was furious.

The reaction was immediate. The video started its “viral” run that week. What followed was amazing: Fox and Friends, stacks of “fan mail,” and a spot on the stage speaking at the NRA national convention.

The journey since then has been equally amazing. Who would believe that an impromptu speech would change the course of someone’s life? That short speech — unwritten, unplanned and delivered on faith — was the culmination of a lifetime of questions and struggles. It was what I had been unknowingly prepared for my entire life.

It was four minutes of fury built on 40 years of frustration.

Keep an eye out for more from Mark Robinson in upcoming issues of Combat Handguns and Personal Defense World. Digital and physical copies available at OutdoorGroupStore.com. 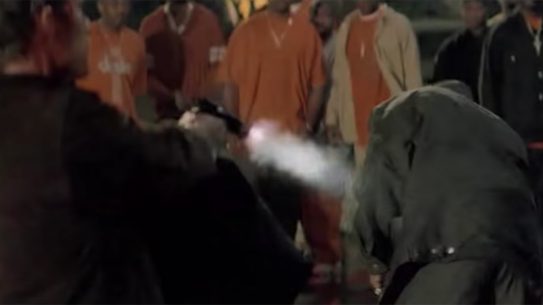 An Indianapolis intruder thought he could rob people by impersonating a police officer, but...