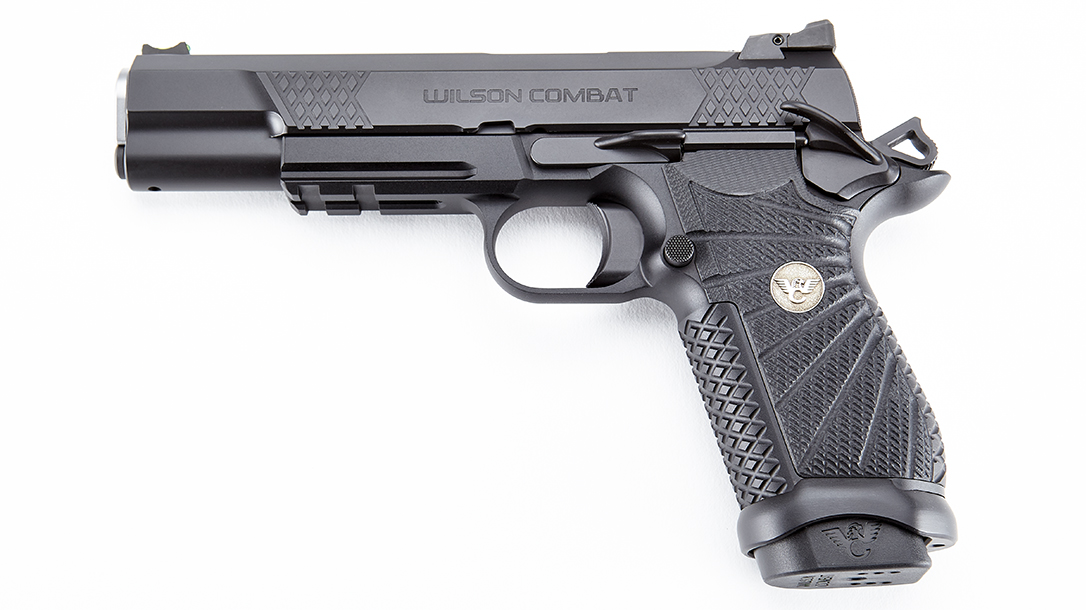 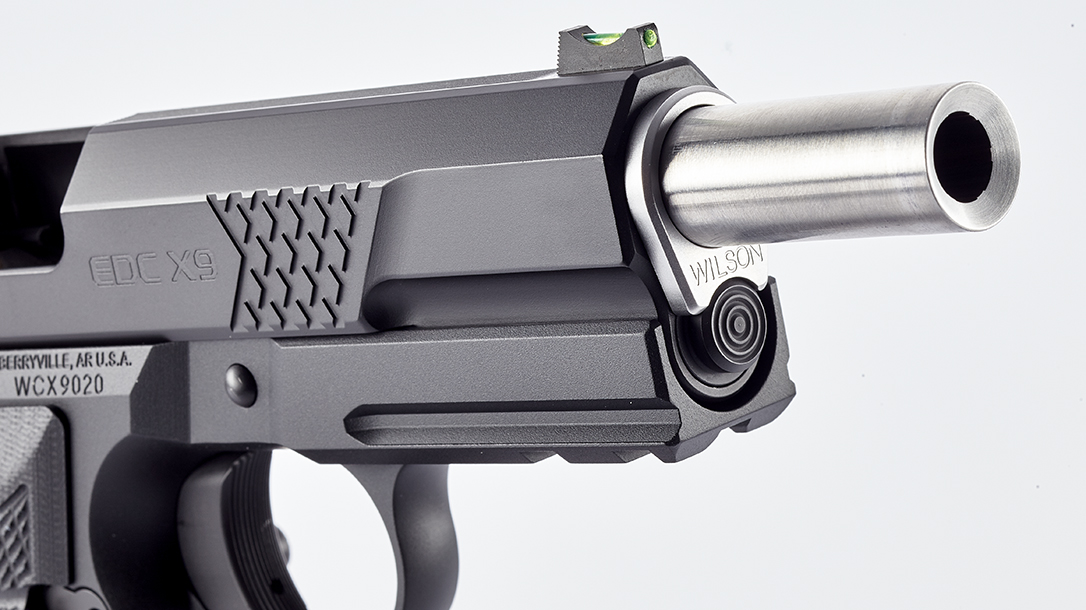 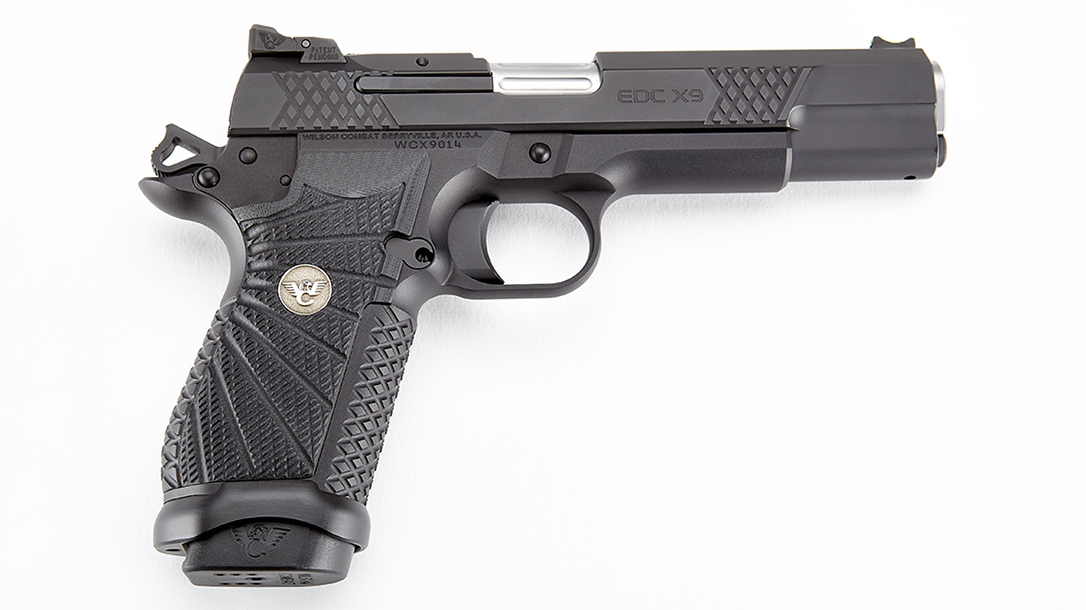 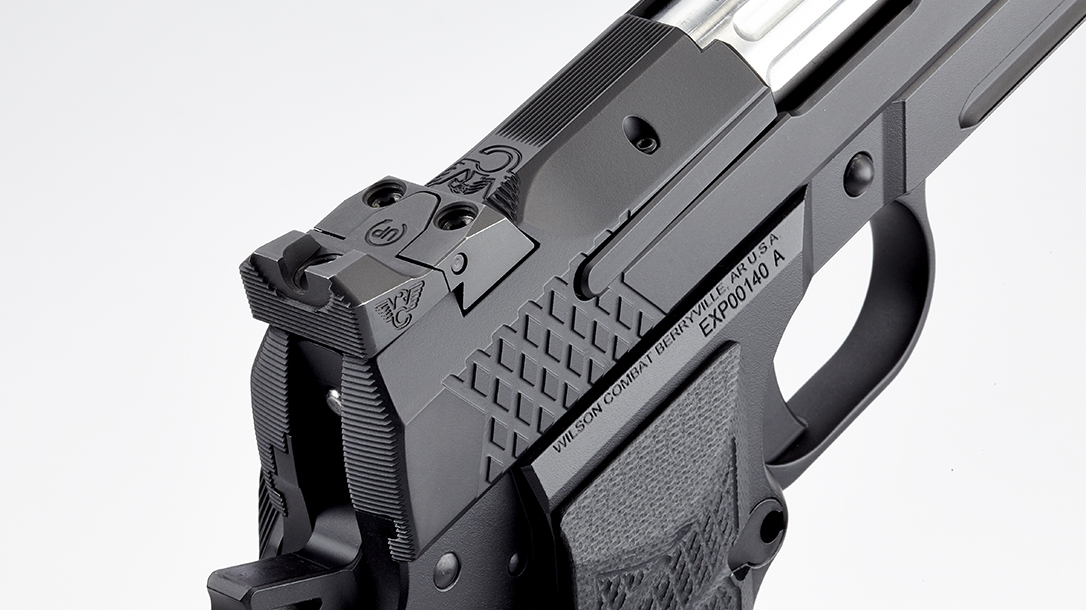 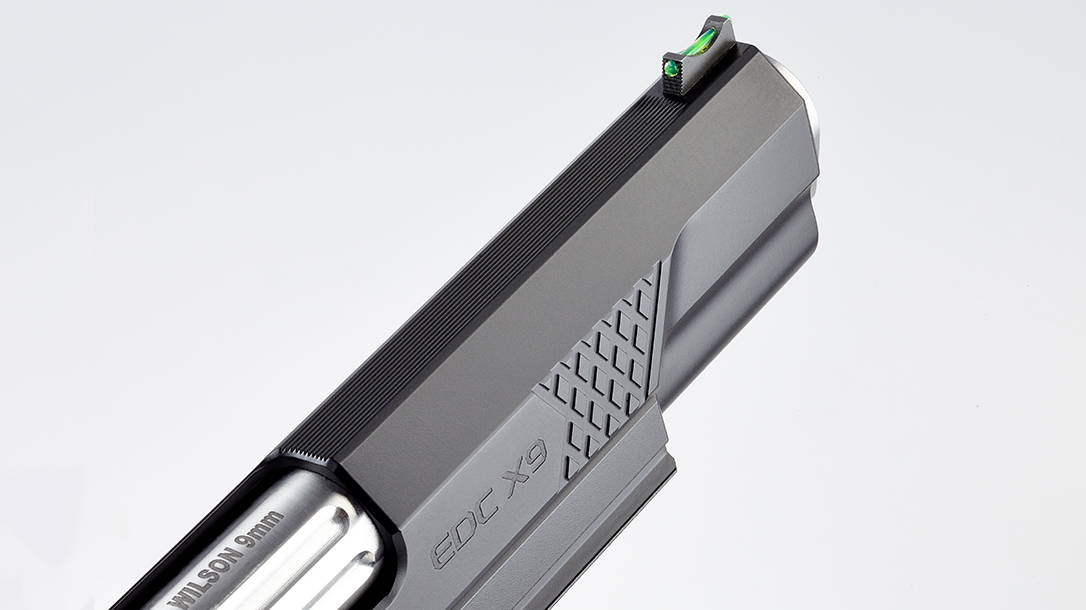 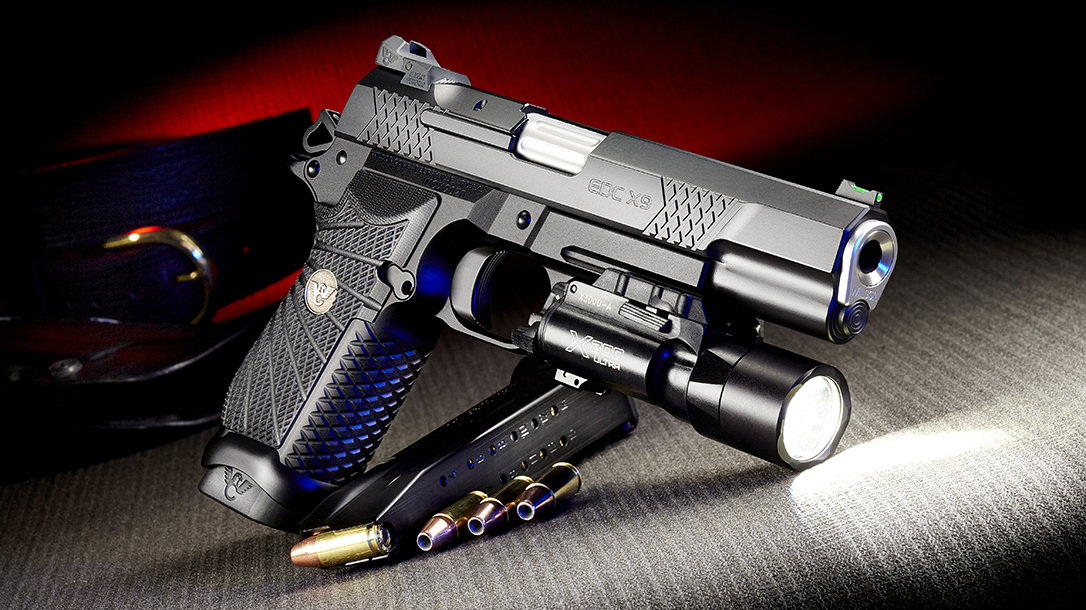 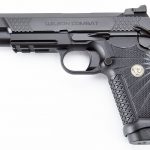 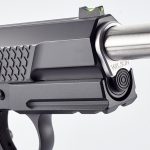 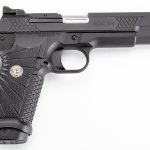 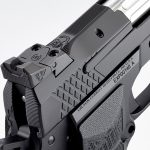 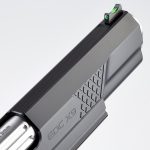 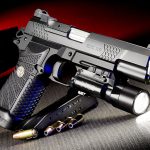 Wilson Combat first introduced the 9mm EDC X9 pistol back in 2017. It represented the most comprehensive and extensive design ever undertaken in Wilson Combat’s history—a long one at 40 years. Bill Wilson is noted for his attention to detail and an unwillingness to simply adopt designs based solely on what’s popular. If it’s going to carry his name, it must be accurate, reliable and the best out there, even if that means designing and building everything in-house, and the EDC X9 is a perfect example of this. 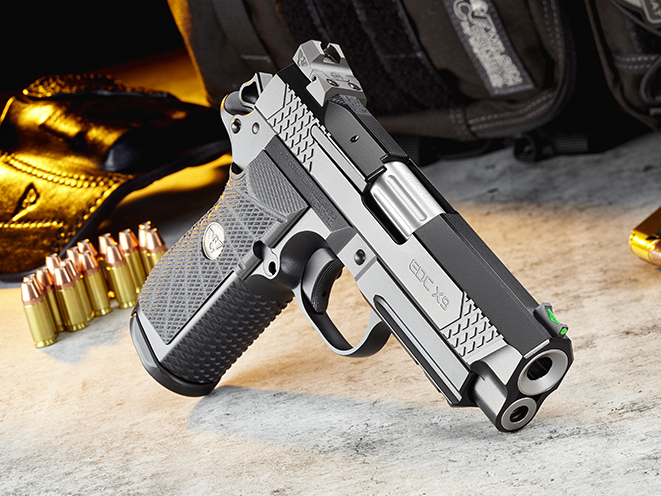 Today, 9mm 1911s are incredibly popular because they’re light on recoil and easy to handle. Wilson Combat makes some of the best, but most are limited to a capacity of 10+1 rounds. So when the company decided to up the ante, it paired its proven EDC 9 slide with a higher-capacity, aluminum X-Frame, resulting in what could be considered the perfect concealed-carry 9mm with a 15+1 capacity.

I first got my hands on the EDC X9 at the 2017 Athlon Outdoors Rendezvous in Colorado. With its 4-inch barrel, it was insanely accurate while being one of the most comfortable pistols I had ever held. The X-TAC treatment on the frontstrap and mainspring housing, paired with the G10 Starburst grip panels, locked the gun into my hand without being abrasive.

But some people would rather “go big or go home.” Full-sized 1911s are popular because their 5-inch barrels offer a longer sight radius and a bit more weight up front to dampen muzzle rise. This brings us to the newest EDC X9 to leave the Wilson Combat shop—the X9L.

Starting from the frame, the new 5-inch-barreled Wilson Combat EDC X9L is similar to its smaller counterpart, with the same X-TAC checkering on the frontstrap and mainspring housing. The G10 grip panels feature Wilson Combat’s Starburst stippling and medallions. There’s also no grip safety, but the high-swept beavertail allows for a high grip, and the magazine well features a funnel for speedy reloads. On that note, the gun uses the same flush-fitting 15-round magazines, as well as extended 18-rounders, and Wilson includes two of each with the gun. Both magazine types have polymer basepads and witness holes so you can see how many rounds are loaded.

Like the original, you can order the EDC X9L with or without a dust-cover rail for lights and lasers, and I got my hands on a railed version for this test. The controls are the same, too, with Wilson’s own Bullet Proof hammer, single-sided thumb safety and magazine release. The trigger is solid, with a 3.5- to 4-pound pull weight, while the slide stop is slightly extended.

The tri-topped slide has X-TAC front and rear cocking serrations, a fiber-optic front sight and Wilson’s Battlesight at the rear. To reduce glare, the top of the slide has 30-lpi serrations while the backside (and rear sight) have 40-lpi serrations.

The fluted, match-grade, 5-inch barrel has a reverse crown and is paired with a Bullet Proof match bushing. The return spring, guide and plunger are all standard 1911, and Wilson includes one of its Shok-Buff recoil buffers. Finally, the slide and frame both sport a durable black Armor-Tuff finish.

I’ve been testing and using Wilson Combat firearms for well more than a decade, and I’ve always found them accurate. This full-sized EDC X9 was no exception. It comes from the factory with an accuracy guarantee holding it to 1.5-inch groups at 25 yards. If the gun can’t meet that guarantee, it doesn’t leave the factory.

At 25 yards, all of my five-shot groups came in at or less than 2 inches, and my best group—an impressive 1.55 inches—came in with SIG’s 115-grain 365 V-Crown JHP ammo. Thanks to the 5-inch barrel, this load was very soft on recoil and easy to shoot, producing results similar to what I can do with a reflex sight installed. Shooting off-hand at 15 yards, the EDC X9L just seemed to stack rounds on top of each other, and rapid-fire strings at 7 yards and in were equally impressive. You expect this kind of accuracy when paying more than $3,000 for a pistol, and Wilson Combat has always delivered.

My final stage of the accuracy testing involved shooting a full-sized steel silhouette at 100 yards, where I got six hits out of 10 shots with Hornady’s 135-grain +P Critical Duty ammo. Not bad for iron sights. And if you are competing and looking for long range, the sights are adjustable to suit your load at whatever distance you prefer.

The slide-to-frame fit was excellent. I didn’t notice any wobble or play, which is a sign of a high-quality pistol. To that end, the gun ran flawlessly with all of the test ammo, including self-defense rounds. The ejection was smooth and consistent, with no stoppages whatsoever. 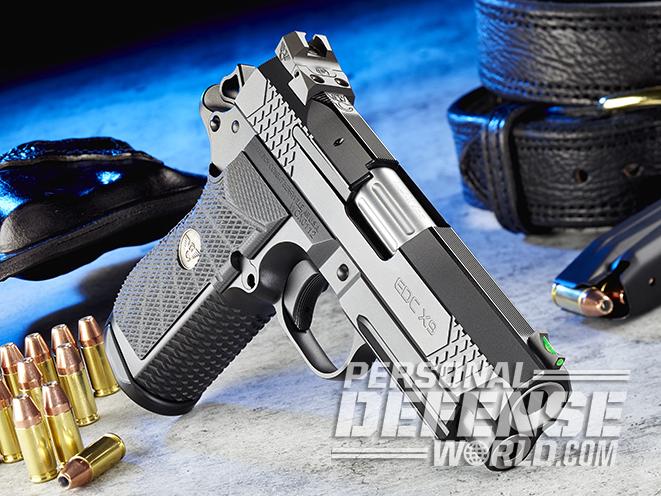 I also wanted to see how the EDC X9L would fair in a duty role, so I tested it with a few different SureFire lights in a Safariland SLS holster. The SLS is designed to fit 1911s with lights installed, and the SureFire X400 made for the tightest fit. Using the standard rail lock, the X300 made for smooth draws and presentations, while the X35, mounted with a screw on the side, was a little snug in the SLS.

I also tested the gun with two more holsters: A Wilson OWB TacSport holster and an IWB rig that I had originally purchased for an STI Carry Comp. Both are great designs for railed 1911s without any accessories installed, and they proved just how easy it easy to carry this particular model concealed, even with its longer 5-inch barrel. No, it’s not as easy as the original 4-inch-barreled EDC X9, but with the right holster and clothing, it’s more than possible. With a jacket, the OWB rig made the gun all but invisible. A sweatshirt covered the EDC X9L without any signs of printing.

Sights can be personal choices, and Wilson offers a few different options for the EDC X9 series. I prefer a big tritium sight out front, and Wilson’s sports a large orange ring around the tritium for faster targeting. Replacement is easy; you just need a #8 Torx driver, so it’s kind of like a Glock without the need for a special tool. The rear Battlesight uses what measures out to a Novak LoMount dovetail, making it easy to replace if you really want to. But the Battlesight is quite effective as is with its 0.15-inch-wide U-notch, which is larger than typical target sights without getting as deep as the trench you might find on some carry guns. The U-notch allows enough light to surround the front sight for faster, easier aiming in low-light conditions.

So who’s this gun meant for? While this is an incredible pistol, it might not be for everyone. Even police departments and tactical teams are widely adopting pistols with barrels in the 4-inch range these days. You’re also not going to get a big boost in the terminal ballistics department by adding another inch to the barrel. But you do get a longer sight radius and muzzle-dampening weight—two big advantages.

Longer barrels are largely becoming the purview of competitors and those who have carried them for years. If you are looking for the least possible recoil and muzzle rise without adding a flame-throwing compensator, this is the ticket. If you have been carrying a full-sized 1911 for decades and want to switch to a 9mm with more rounds on tap, the EDC X9L is a great option. It’s pretty hard to beat because it’s extremely ergonomic, accurate and reliable. What more could you want? For more information, visit WilsonCombat.com.

This article is from the July/August 2019 issue of Combat Handguns magazine, on sale May 7. Grab your digital and physical subscriptions at OutdoorGroupStore.com. 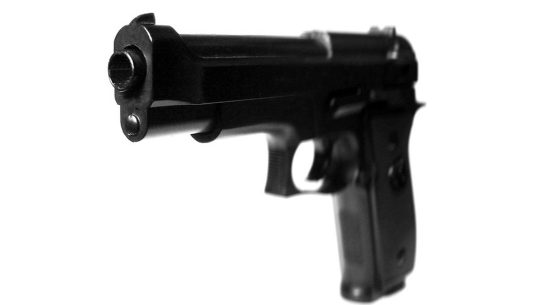 An armed robber made the mistake of trying to rob a Missouri concealed carrier,...