0
SHARES
0
VIEWS
Share on FacebookShare on Twitter
Last Sunday morning, a young girl woke up to find a man inside her room. Not only that, the alleged intruder decided to remove his clothes while the Kentucky 12-year-old laid in bed. The girl was able to get away, and the mother’s boyfriend eventually sent him fleeing with a few shots. 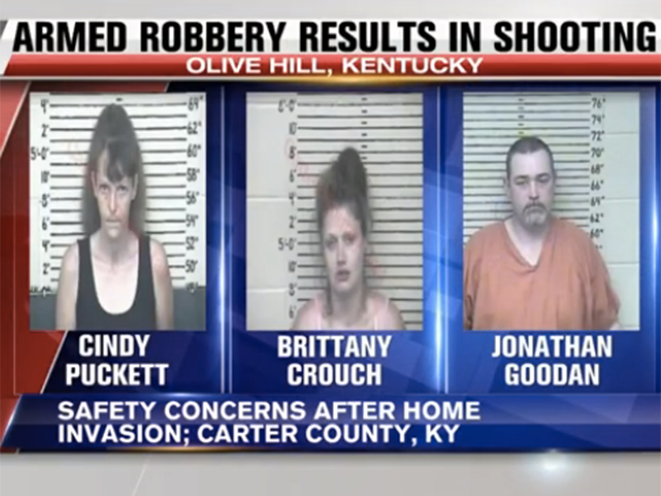 The incident began around 7 a.m. when Donald Oliver supposedly broke into the home of his neighbor. He then went to the girl’s room and took off his clothes. However, the girl didn’t panic, according to her mother Tina Burton. Instead, she hid under the covers and turned down her lights and phone. She also texted her mother and waited until the right moment to jump up and run out of the room. That’s when Oliver headed to the kitchen in his underwear, which is where Ali Bracey confronted the suspect.

“I told him to get out, and he didn’t want to move,” said Bracey to WDRB. “And he growled at me.”

When Oliver didn’t leave, Bracey started whacking him with a broom handle. However, Oliver fought back, so Burton got a gun and gave it to Bracey, who fired six shots at the intruder. That’s when Oliver finally fled the residence.

Shortly later police arrested Oliver nearby and transported him to the hospital with non-life-threatening injuries. They also found a small bag of heroin that they believe he dropped when undressing. He now faces burglary, assault and possession of a controlled substance charges. Oliver has a history of arrests, including a sexual misconduct conviction.

For the most part, this family performed well in a bad situation. The young girl kept calm, which allowed her to determine her best options, which ended up being fleeing. The boyfriend and the mother then worked together to get the means to end the attack. However, the boyfriend should probably work on his accuracy. He fired six shots at the intruder, and while he hit him with at least one, none seem that serious. Sure, Oliver faced the judge in a wheelchair, but he did it the day after the incident.

There is no way of knowing exactly what happened, but it shows the importance of using sights. Now combat shooting is not like standing at the range. Instead of perfectly lining up the front sight in the middle and level with the rear sights for a good sight picture, shooters should use a flash sight picture. In a home-defense situation, the target is typically going to be quite close. This allows shooters to simply get the front sight somewhat aligned with the rear sights, rather than perfectly.

As long as the shooter aims center mass, the bullet is probably going to hit its intended target. If the front sight is a little high or low, left or right, it’s going to hit a little in that direction, but not much. Consider using flash sights at 3 to 7 yards during your next range session. You might be surprised at the accuracy and the speed.