by Denis Prisbey
in Guns, Handguns
0

The old saying “Beauty is in the eye of the beholder” is pretty much rule No. 1 in the case of .44 Magnum autopistols. A revolver can be trimmed down quite a bit to shoot the .44 Magnum — if you’re sufficiently resistant to pain and have access to a good carpal tunnel surgeon — but there’s no way to hold back on either size or weight in a reliable .44 Magnum pistol, and regardless of the maker, usually you’ve got to be a hardcore admirer to find any beauty in what has to be a big and chunky steel blaster. There’s no room for plastic in this particular section of the gun world, and svelte does not apply. 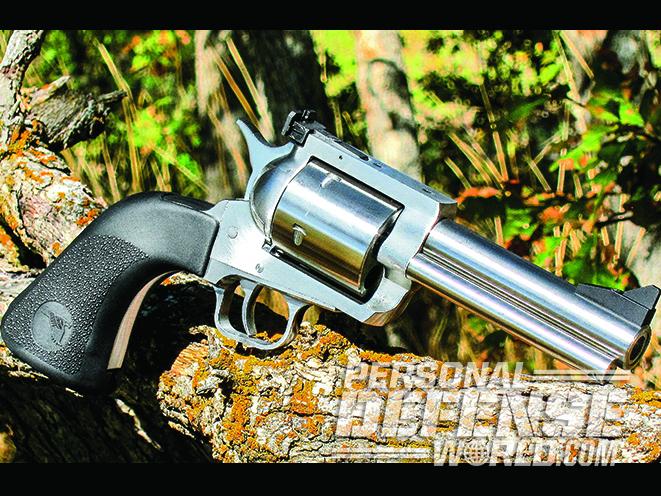 Over the years, there have been a few attempts to produce .44 Magnum semi-autos for what is undeniably a very niche market. However, the Magnum Research Desert Eagle is the only one in (mostly) continuous production since its introduction over 30 years ago, and it’s arguably the most famous. While production has been moved back and forth between the U.S. and Israel, the gun that has nearly 500 large- and small-screen credits has achieved legendary status; it’s currently being made back in the U.S. at the Magnum Research facility in Minnesota.

There have been three major iterations of the Desert Eagle: the Mark I in .357 and .44 Magnum in 1983; the Mark VII in 1989 with slight redesigns; and the current Mark XIX developed in the 1990s to allow users to switch between .357 Magnum, .44 Magnum and .50 Action Express barrels. The Mark XIX comes in a wide range of finishes that run from stainless through black oxide, tiger striped, burnt bronze, titanium gold, chrome, satin nickel, polished nickel and 24-Karat gold. And now there’s a color-casehardened Magnum Research Desert Eagle.

This particular .44 Magnum Desert Eagle Mark XIX is a gas-operated, 4.41-pound assembly of CNC-machined steel with a 6-inch barrel; a 3-inch Picatinny rail on top; a long slide release on the left side; a sizable ambidextrous thumb safety; a relatively small magazine release on the left side; a serrated gold-plated trigger; a serrated hammer spur; a long beavertail; an 8-round steel magazine; fixed, all-black, steel sights; and walnut grip panels.

If you’ve never seen one in person, go back to that 4.41-pound line above. The gun is huge. The first time I shot a .44 Magnum Desert Eagle was 20 years ago, and the experience hasn’t changed. I own .44 Magnum revolvers, and they’re pretty simple affairs, but the Desert Eagle’s slide is a beefy chunk of steel, and when you touch a round off, it slams back and forth while the gun recoils sharply in the middle of whatever blast and flash your load creates. It’s a whole other situation if you’re used to wheelguns.

In terms of finishes, you can go from very subdued to extremely eye-grabbing on these Desert Eagles. This depends on your tastes and wallet, but the new casehardened model splits the difference between basic black and gaudy gold. In fact, this gives you the chance to impress your buddies with some nice “Hey, look what I got!” bling, without being accused of going too far in the ego spectrum.

These colors are quite well done. And while they’re produced with a modern chemical process, as opposed to the older bone-charcoal method of true casehardening, they’re close enough to sell the idea and justify the hefty $2,278 price tag. Blues and browns dominate, at least on my test sample, and bright sunlight really helps them pop. Coverage extends over 100 percent of the slide and frame, with smaller parts done in a dark oxide. Nosing it around here and there brought a universal one-word response — “Beautiful!” — and it certainly is.

Let’s be honest here. In my hands — much more used to working with polymer-framed pistols than it used to be — the Desert Eagle feels very awkward. The grip is just a hair too big for true comfort, and, not surprisingly, it’s very muzzle heavy. It won’t ever be a boot gun, so to speak, or a serious contender carry. But it is undeniably a serious shooter.

During testing at an indoor range, firing at my usual black bullseyes at 25 yards off a rest, the new pistol stood up and got my attention with every shot fired — at both ends of the bullet path. Four jacketed loads (naked lead is verboten in the Desert Eagle’s gas operating system) in three bullet weights bucked and blasted at my end. However, they made very nice five-shot groups on paper at the other end, right at the point of aim.

Winchester’s “White Box” 240-grain JSPs started the show as a lower-priced performer in the “classic” .44 Magnum bullet weight. Then, Black Hills followed with its 240-grain JHPs to up the ante. Both surprised me with what they printed, and so did the Winchester 250-grain Platinum Tip HPs that put us up into a higher performance bullet bracket. All three held under 2 inches, and considering the all-black sights on the pistol that no longer work well with my eyes, I had no gripes at all.

The Desert Eagle unexpectedly choked on the premium 225-grain Barnes VOR-TX XPB rounds. But these light bullets, while light on recoil, created feed-ramp stoppages that indicated they weren’t cycling the slide fully. Apparently there just isn’t enough steam in this round to cycle the gun’s gas system. This load’s accuracy was also only okay, grouping well over 3 inches wide.

The first three loads would make fine choices for a good range of hunting scenarios, whether you need deeper penetration with a soft point or wider expansion with a hollow point. We’ll just reserve the Barnes ammo for revolvers, which is what they’re primarily designed for in the first place. Also note that the Black Hills rounds will light up a good section of the surrounding countryside at night.

The pistol uses a multi-lugged rotating bolt head very similar to the AR-15’s, with matching locking lugs at the back of the barrel, to contain .44 Magnum pressures. The test pistol showed tight machining tolerances, and before hitting the range I thoroughly lubed those lugs on both the bolt head and barrel, and the frame and slide rails, to give the gun a fair chance. It’s a more complicated system than your average autopistol — it needs more attention — and as the test session showed, it can be a tad ammo sensitive, even with the best quality stuff. But that’s not a comment on either the gun or ammo; just a notation on the realities of life. Do some functional analysis with a projected load before fielding it and remember to keep the pistol lubed.

At the bench, I used the walnut grips that came on the gun, because they look classier, and in a shadow box on the wall, there’s absolutely no contest. But for field use I’d go with the Hogue rubber grips that Magnum Research includes. Light checkering would be a different ball game, but those smooth walnut grips tend to move around in the palm, and the rubber grips don’t. The trigger, incidentally, was far from target grade and could be much better. The single-action pull was beyond my 8-pound scale, with marked travel before the break. Apparently Magnum Research wants you to be very sure you truly want to fire the gun when you put your finger inside the triggerguard. 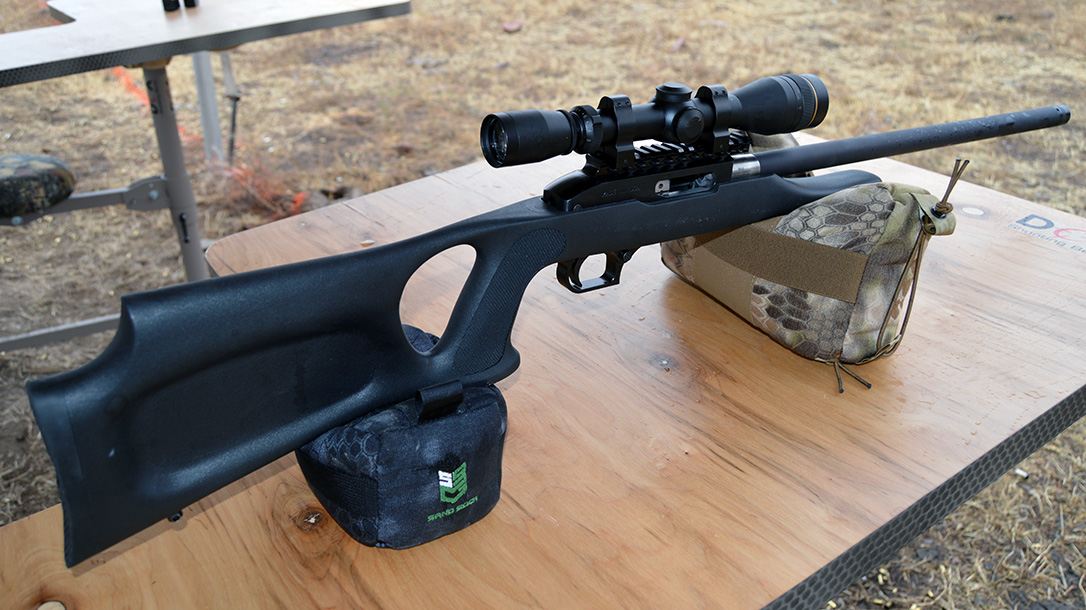 The Magnum Research SwitchBolt Is the Coolest .22LR Rifle Out There

While manufacturing techniques and design evolution have changed a bit since my 1998 introduction to the Desert Eagle, the basic pistol and function are the same. It hasn’t shrunk any, and neither has its performance. Magnum Research has done a very nice job on this color-casehardened version, and if you’ve been dithering on adding a Desert Eagle to the family, this would be a standout choice that goes well beyond its pretty colors at the range and on the hunt. For more information, visit magnumresearch.com.