In college I majored in criminal justice and pre-law with a minor in political science. I am always jazzed to read and understand Supreme Court decisions and policy. I know most of you are sane and don’t typically pick up majority and dissenting opinions from higher courts as a fun read; that’s why I’m here to bare the “burden.” I got you. In this case, I’m looking at Soto vs Bushmaster.

The purpose of explaining the recent Connecticut Supreme Court majority decision against Remington, which passed with a narrow 4-3 vote, is to perhaps clarify a few things about how this case came to be and how it passed the Supreme Court.

Firstly, I’ll explain how the plaintiffs (the Sandy Hook relatives) are using state law to sideline federal law; in this case, they’re using Connecticut Unfair Trade Practices (CUTPA) against the Protection of Lawful Commerce in Arms Act (PLCAA). Second, I’ll provide insight on the rationale of the courts majority, where I think they went (very) wrong. I’ll also dive into how the dissenting opinion backs my assertions. Thirdly, I’ll touch on ignorance of guns and gun ownership and how it’s played a large role in the outcome.

I was thrown off about this case immediately for one particular reason: The supremacy clause. For those who may not know, the supremacy clause, which is outlined in article VI of the Constitution, contains what is called the doctrine of preemption. Basically, it says when state and federal legislation are conflicting, federal law wins.

This case pinned a state law against a federal law. It made me very curious how a Supreme Court created a rationale that basically circumvents something clearly explained within the Constitution itself. Now that I got that one off my chest, let’s get into the meat and potatoes of this mess.

What the Supreme Court Got Wrong

For those who assume the Supreme Court allowed this case to go through no questions asked, you’re dead wrong. They shot down several of the plaintiff’s theories and interpretations of various laws they felt were violated by Bushmaster and its marketing. However, they missed the mark big time regarding two main things as it pertains to law; not to mention several things that were alleged and misguided in their opinion.

First, they assumed when Congress enacted the PLCAA (federal law) they did not intend for it to be a narrowed scope of interpretation and assumed the few exceptions within the law should be viewed from a broader scope. If you know anything about law and precedent, the opposite of this assumption is actually the right answer 99.9 percent of the time. The judges in the dissenting opinion — those not part of the majority vote — acknowledged this as part of the problem of the ruling.

There are six exceptions laid out in the PLCAA when a firearm manufacturer may be held accountable for committing statutory violations. When exceptions are created in a law as air tight as this one, those exceptions should not be viewed broadly and left open to interpretation as was done in this ruling. One of the dissenting judges explains:

“… when a statute sets forth exceptions to a general rule, we generally construe the exceptions narrowly in order to preserve the primary operation of the [provision].’’ (Internal quotation marks omitted.) Capitol Records, LLC v. Vimeo, LLC, 826 F.3d 78, 90–91 (2d Cir. 2016), cert. denied, U.S., 137 S. Ct. 1374, 197 L. Ed. 2d 554 (2017). This ‘‘proposition . . . is supported by commonsense logic. When a statute sets forth a general principle, coupled with an exception to it, it is logical to assume, in the face of ambiguity in the exception, that the legislature did not intend the exception to be so broad as to leave nothing of the general principle.’’ Id.”

This was SPOT ON. The judges explain it much more eloquently than I could even think it. However, I hope this section further explains my point to all of you as well.

The second idea the Supreme Court majority got wrong, was its interpretation of PLCAA. They said PLCAA does not bar the plaintiffs from pursuing wrongful marketing that is “covered” by the state law CUTPA; therefore, the state law is being used as the means to proceed forward with the case. They basically agreed that there could be a potential direct link proven in a court of law between the Bushmaster’s marketing and Adam Lanza’s choice of weapon, which “magnified the lethality” of the massacre. Now, to their credit, I don’t think they are 100 percent convinced it can be proven in a court of law. In their opinion they went so far as to state:

“In the present case, by contrast, the plaintiffs allege that the defendants’ wrongful advertising magnified the lethality of the Sandy Hook massacre by inspiring Lanza or causing him to select a more efficiently deadly weapon for his attack. Proving such a causal link at trial may prove to be a Herculean task.29”

They do though, think it can be proven or else they never would have allowed it to move forward. Personal opinion here: Based on the narrow passage of the case and based on the language the majority used in their own opinion, this was moved more by emotion than it was legal and precedented logic. What happened at Sandy Hook is absolutely tragic and, frankly, gut wrenching. I am sure for the judges this was difficult to navigate considering it happened in their community and to the people they try to protect in their own way. They are human.

However, I do think when it comes to interpreting the law, they committed massive acts of overreach in several of the things they noted. To me, it was obvious they were grasping at straws to find a way to “help” the plaintiffs find closure because they didn’t have their day in court with the pathetic terroristic coward that committed these acts. But it’s no excuse and it’s potentially dangerous to set this legal precedent.

I am merely stating what I think happened here because it is not often a Supreme Court acts fast and loose with any legislation. We hold them to a higher standard and they must maintain said standard.

They also brought up that it was not the only weapon in Lanza’s home. There were a few handguns, a couple bolt-action rifles and a shotgun. The plaintiffs believed — and the majority of the court agreed — that there was a link between how Bushmaster marketed this particular gun (the XM15-E2S) and how that marketing influenced Lanza to use it instead of his other options to inflict more damage in less time. They think they can prove that Bushmaster encouraged consumers to use guns “not for legal purposes.”

Man, oh, man. I wouldn’t want to be the attorney tasked with proving that Bushmaster is guilty of this beyond a reasonable doubt. No, sir.

When referencing exactly how Bushmaster appears to promote this, the court wrote the following in its majority opinion:

“The plaintiffs have offered one narrow legal theory, however, that is recognized under established Connecticut law. Specifically, they allege that the defendants knowingly marketed, advertised, and promoted the XM15-E2S for civilians to use to carry out offensive, military style combat missions against their perceived enemies”

The following questions were my immediate, unedited written thoughts upon reading this statement:

I have to say, this one shocked me. It also proved the ignorance that many people have to the gun industry and its marketing. While do you see military guys in these ads? It’s because many people watching want to be them in the sense they want to be the “cool guy.”

When onlookers view this ad, the company wants the them to walk away thinking one thing. You know what it is? “Hey, if this gun is good enough for the subject matter experts, then it is something I should consider.”

I can’t reasonably fathom a marketing team getting together and thinking, “Hey, if we put military guys on these commercials, people are going to want to buy these guns to commit unsolicited mass murder on their enemies.” But I digress.

Final Thoughts on Soto vs Bushmaster

There is a lot to unpack here. This is a relatively unprecedented case. While I am frustrated with the Connecticut Supreme Court’s rationale, I do not see how this will survive the U.S. Supreme Court regarding preemption or in a court of law regarding CUTPA. We will see what happens. I hope this helped clarify what this case is, and what it is not. 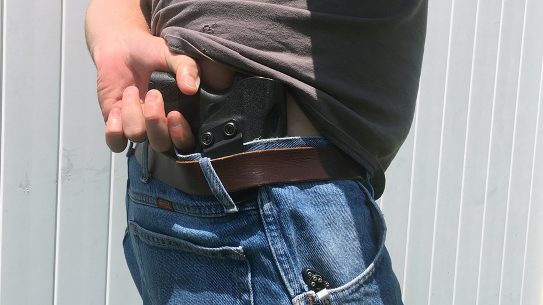 If your strong hand goes down at the beginning of an incident, you might...