3
SHARES
344
VIEWS
Share on FacebookShare on Twitter
Handguns designed for ultra-discreet concealed carry are all the rage right now. This has led to the rise of some interesting options available to consumers. While some may seem truly innovative, others are experiencing a resurgence. Here are some examples of antique pistols that we’re seeing reimagined today, and some that we will likely never see again. 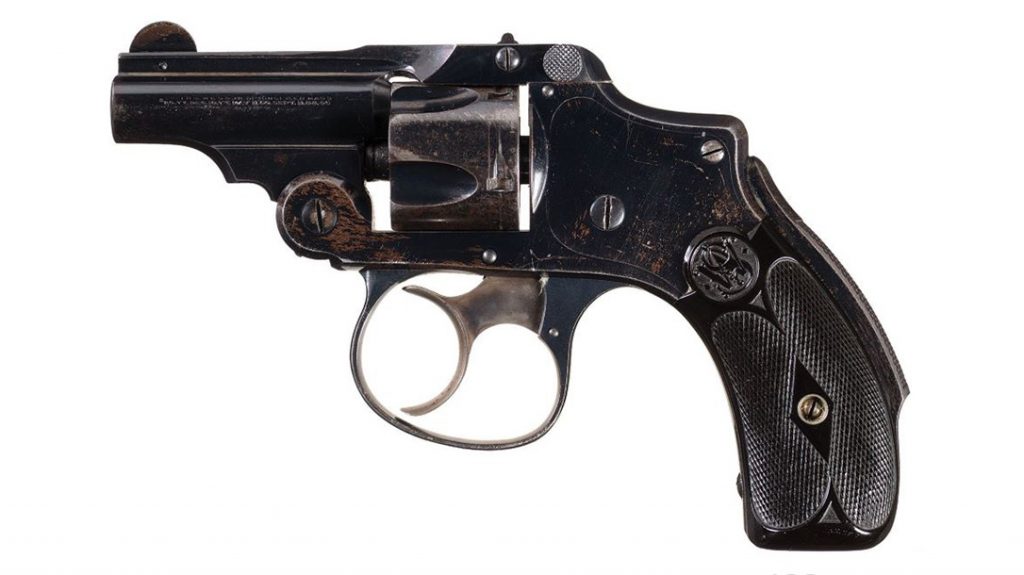 Smith & Wesson’s Safety Hammerless revolver is better known by its “Lemon Squeezer” nickname, derived from the grip safety on the backstrap. Made from 1888 to 1937, these guns were popular pocket pistols because there was no external hammer to get hung up on your pants when drawing from concealment.

When equipped with a 2-inch barrel, the revolver became known as a “bicycle gun” because it was comfortable to carry while riding a bike. (Huh, imagine that!) The 2-inch-barreled bicycle variants of the Safety Hammerless are collector’s items today, bringing considerably more than their cousins with longer barrels. Other than that, they’re exactly the same as any other .32- or .38-caliber top-break revolver. 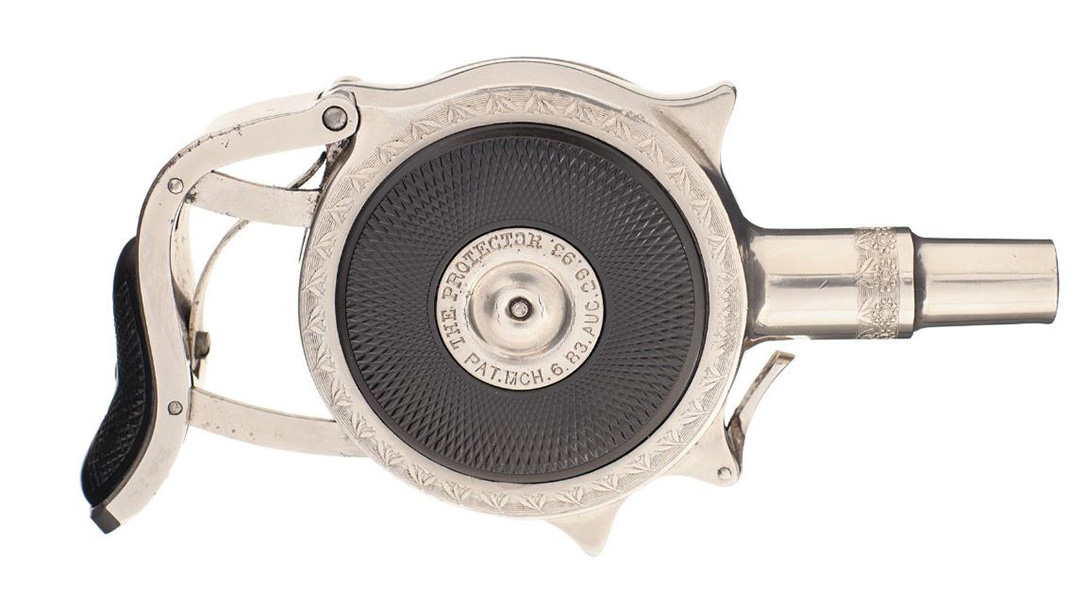 By far, the most widely known example of palm pistols is the Protector variant. First patented in 1883 in the United States, the design would go on to become patented in Belgium, Italy, England and France. Two geographically named companies sold the guns in the U.S.: the Chicago Fire Arms Company and Minneapolis Fire-Arms Company.

The .32 Short rimfire cartridges were loaded into a turret that was held in place by the gun’s sideplate. Each of the seven shots is discharged by squeezing the palm lever at the back of the pistol. The squeezing motion both rotates the turret and forces the firing pin against the back of the cartridge. 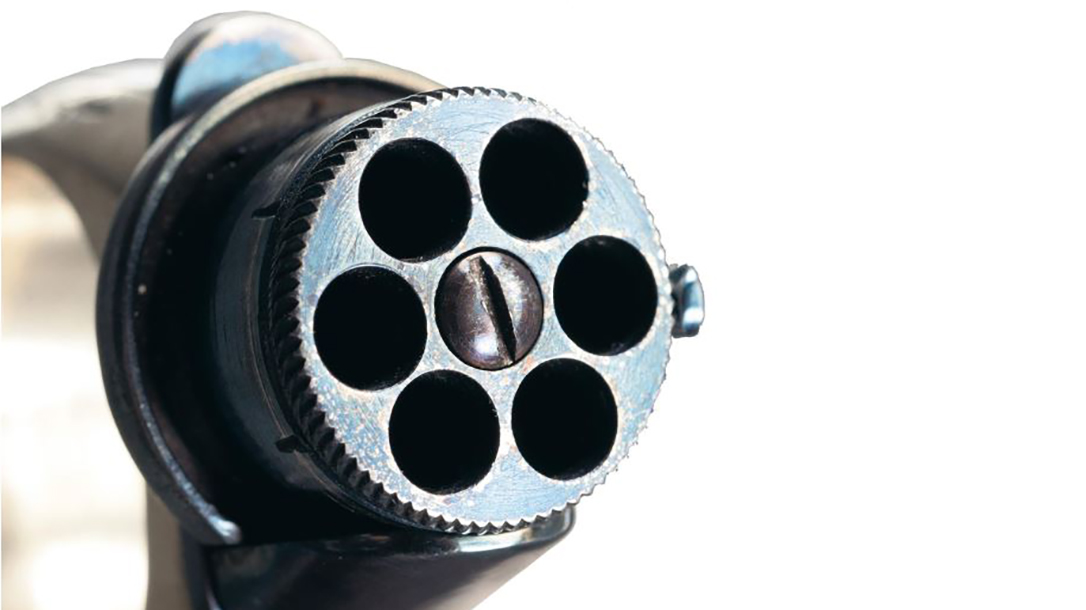 The smallest example on the list is Le Petit Protector. It is also the most misunderstood pistol here. With its fitted case and pinfire ammo, the gun evokes the feel of mid-19th century Europe. In reality, however, these ring pistols were all made in the 20th century. The “steampunk” design and use of obsolete ammunition help give the gun its 19th century feel.

The 5.5mm pinfire cartridges load into the five-shot, revolver-style cylinder. There is no barrel. Other versions included a six-shot, 4mm design and a seven-shot, 2mm design. To fire the gun, you have to first manually index the cylinder. Once lined up, you manually cock the hammer. Wearing the pistol on your index finger, you simply reach up with your thumb and pull the trigger to fire it.

Because of the comically diminutive ammunition used, it is probably safe to say that these are the most unusual personal-protection pistols ever made. 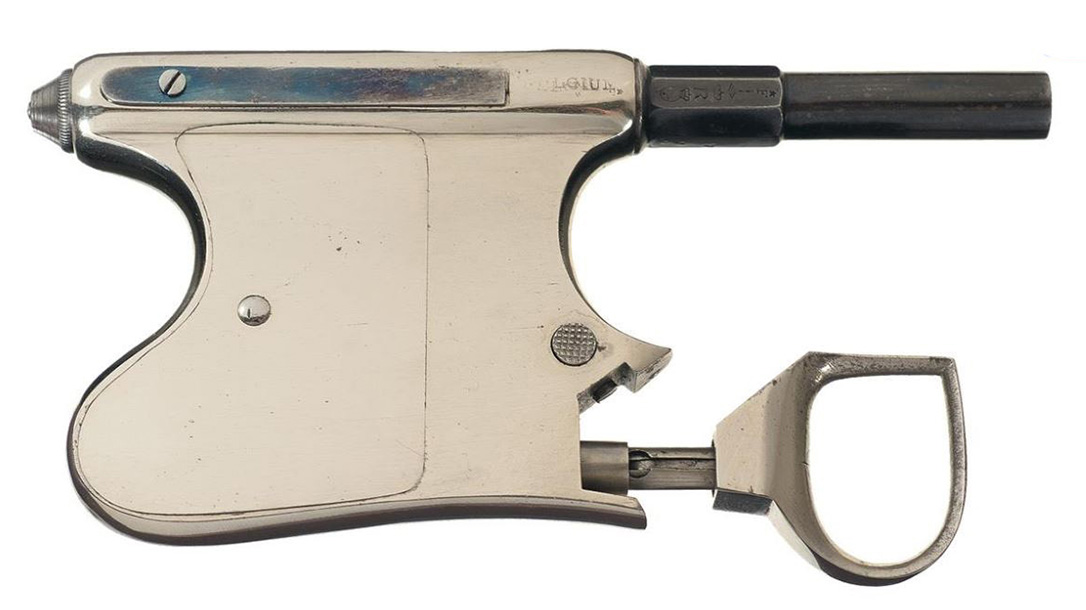 Invented in Italy in 1890 by Catello Tribuzio, this all-metal, ring-trigger pistol loads from the top into a vertical magazine. It was available in 7mm or 8mm, and both variants came equipped with a 2-inch barrel.

Quite ergonomic in design, the Tribuzio is held so that your middle finger fits into the ring trigger. Then, you simply squeeze to fire the gun. A safety lever on the left side of the pistol doubles as an access point for the gun’s internals. Unscrewing it allows the sideplate to be removed for cleaning and repairs. 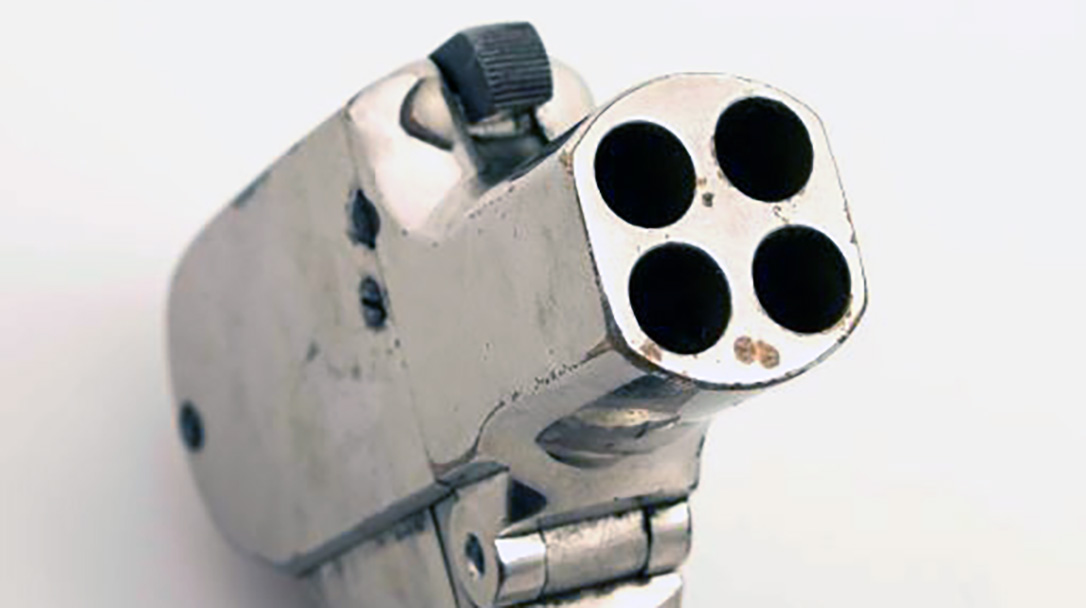 When it comes to C.S. Shattuck’s pistol, the name really says it all: Unique. Chambered in .22 or .32 rimfire, the Unique utilized a rotating firing pin to discharge each round in the gun’s four barrels.

The pistol’s patent application was submitted by Oscar F. Mossberg, who was an employee of Shattuck’s in 1906. Mossberg eventually ventured out on his own and based his own four-barrel palm pistol, called the Brownie, on Shattuck’s Unique design.

Browning fared much better than his former employer, as almost no one is familiar with C.S. Shattuck. The fact that Shattuck’s name is misspelled on his own gun—leaving out the second “T”—was certainly no help when it came to name recognition. 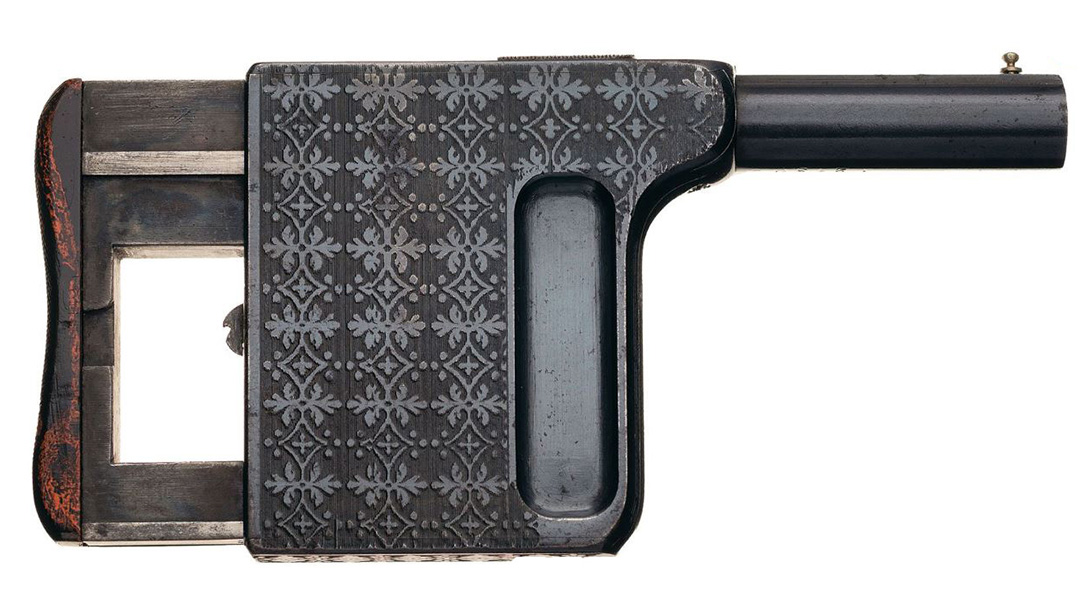 One of the most interesting designs in Europe was the Gaulois Squeezer. The gun fires exactly the way you would think: by squeezing it. Since the pistol is only 0.63 inches thick, it fits easily in your hand, with the barrel protruding between your fingers. The sliding mechanism at the back of the pistol does all the work. When it is squeezed, a cartridge is moved up from the magazine in the grip to the barrel. Once in the barrel, the cartridge is fired at the completion of the squeeze. Releasing the mechanism ejects the spent case, making the gun ready to be reloaded and fired with another hand compression.

All Gaulois pistols held five 8mm rounds in the magazine. Most were simple and unadorned, but some more elaborate models were available. For a little extra, the Squeezer could be finely engraved and accompanied by a leather carrying case that could easily be mistaken for a cigar case. 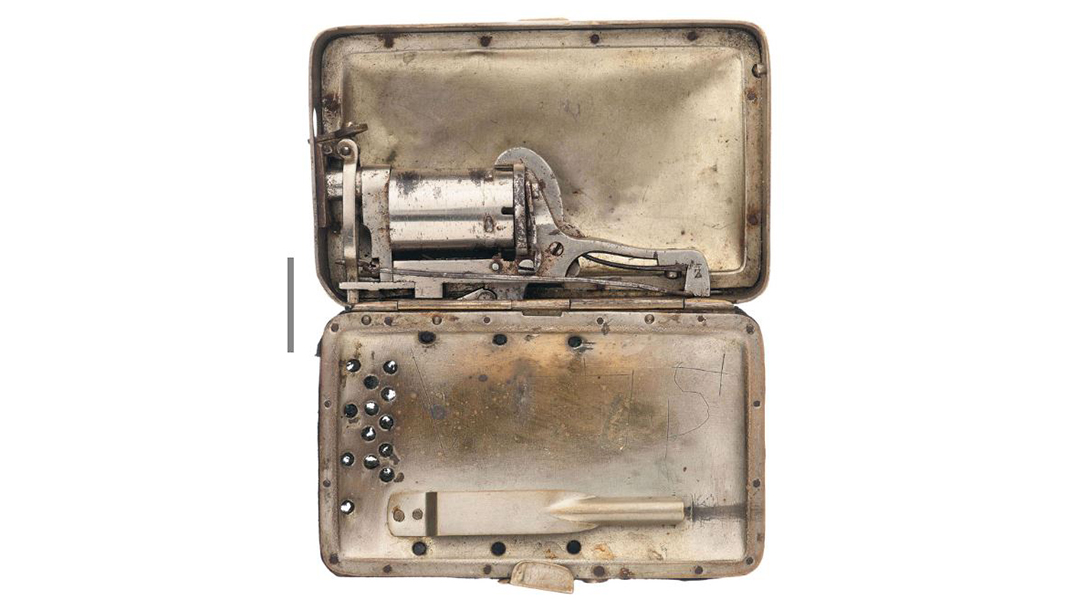 Designed for women in 1877, the Frankenau was marketed in the United States as a pocketbook revolver. In England, it was called a purse revolver. No matter what you choose to call it, the gun is exactly what it sounds like. One side of the device houses a 5mm pinfire revolver. The other side really is a pocketbook.

Designed to be fired from a closed position, the muzzle is covered by a pivoting gate that is moved out of the way during the first part of the trigger pull. The trigger itself folds into the body of the pocketbook and can be easily deployed when needed.

The two halves are completely independent from one another. You can access your money without anyone knowing there’s a revolver in the other half of the purse. The muzzle cover, independent halves and folding trigger make the Frankenau an incredibly discreet option for concealed carry. 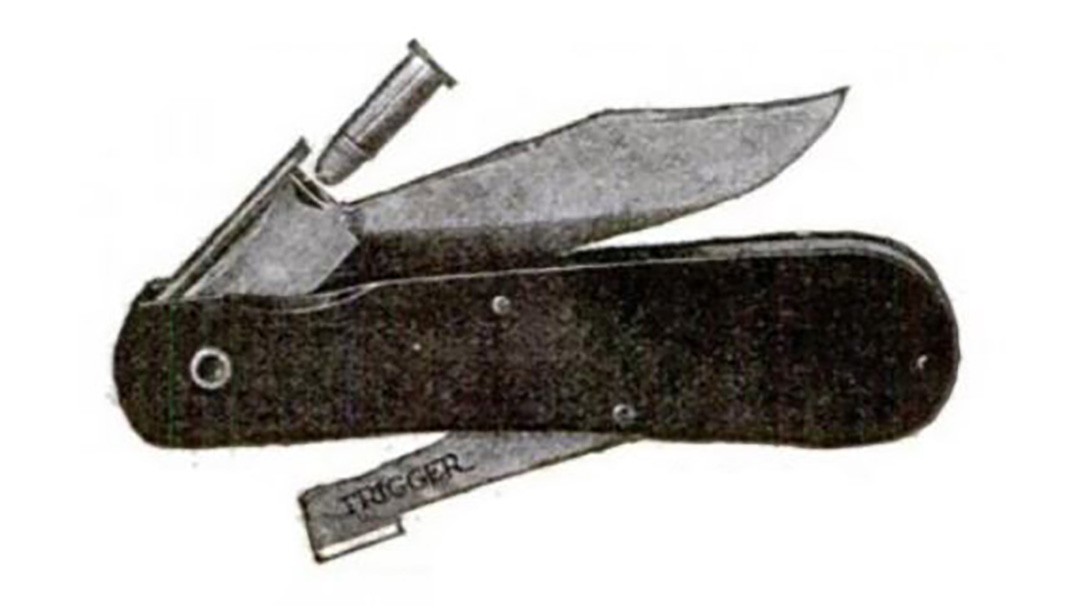 We’ve all heard that you shouldn’t bring a knife to a gunfight. But that doesn’t mean you can’t bring both, which is exactly what you can do with the knife pistols made by the United States Small Arms Company. 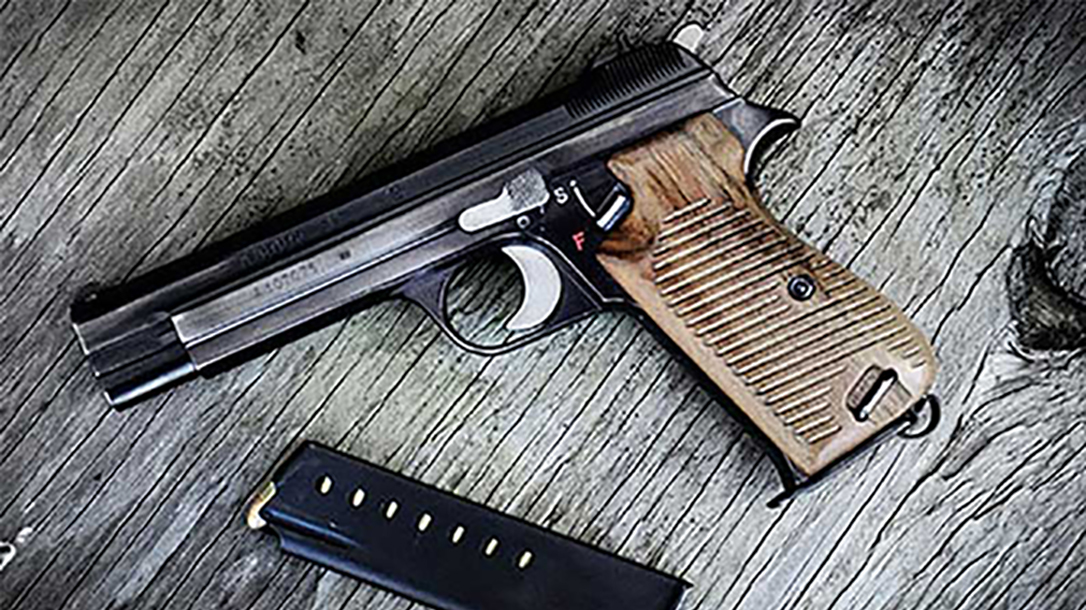 While it is decidedly not a toy, one of the retailers was the American Novelty Company of Chicago, Illinois. The single-shot, .22-caliber, top-break pistol was marketed as “a practical pocket firearm” that has “a thousand uses.” I can think of only two (cutting and shooting), but that didn’t matter to early 20th century advertisers.

This article comes from the 2019 Concealed Carry issue of Personal Defense World magazine. Grab your copy at OutdoorGroupStore.com. For digital editions, visit Amazon.