The pistol as tested with the Trijicon RMR.

Here are a couple clichés to start: “Being lucky often trumps being good”; and “Never underestimate importance of being in the right place at the right time.” What am I talking about? This is how I felt when given the opportunity to handle the new FN 509 Midsize MRD before its official release. The new offering exemplifies how handguns morph from original form to satisfy mission and customer needs. 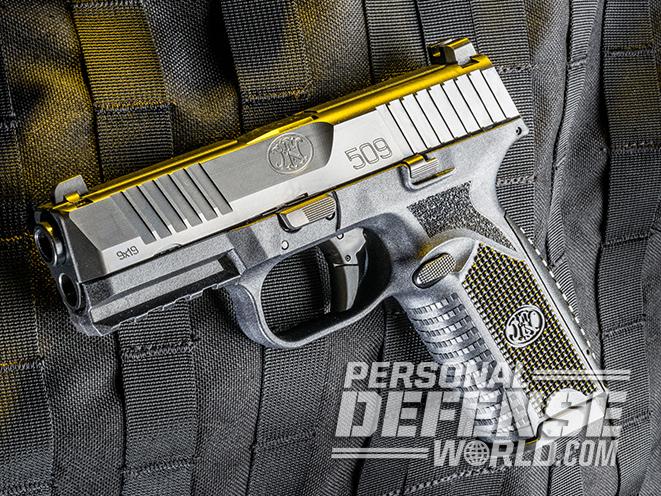 The mounting of a red dot sight seeks to enhance the handgun’s capability. This flows from prior experience involving rifles and red dots. The miniaturization of sights along with ruggedization makes this possible. Initial red dot-equipped handguns reflected more of an offensive role type. The FN 509 Midsize MRD is part of a new genre of red dot handguns that promote everyday carry.

The FN 509 Midsize MRD package has multiple tweaks and enhancements beyond the original FN 509; those include co-witnessing suppressor height sights, a flatter face trigger, an improved contoured slide lock lever, and an extended extractor that also acts as loaded chamber indicator. But the features don’t stop there.

What really gets your attention is the rear of the slide, which FN modified to facilitate mounting of several of the most popular red dot sights. FN labels this as its patented FN Low Profile Optics Mounting System; it features a series of plates for accommodating at least 10 different red dot optics.

FN’s Optics Mounting System is being heralded as one of the best multi red dot-mounting systems currently on the market. FN introduced earlier on the FN 509 Tactical. A blank plate covers the rear receiver when no red dot is in use. The plate mates seamlessly to the slide. FN also includes an extensive packet of plates, screws, and spacers, along with a well done instruction manual with the Midsize MRD. A quick reference indicates what combination of parts to use to mount a variety of red dots, all the while maintaining reference to iron sights and the pistol’s bore. Having a slide milled to a specific sight limits your flexibility in choosing various red dots. The FN Optics Mounting System is the best alternative method.

Considering the design of the FN 509 Midsize MRD and its intent as an everyday carry handgun, FN set us up to dedicate some time evaluating the pistol working around vehicles, breaching facades, door entries, and other CQB activities. FN equipped my pistol with a Trijicon RMR. The pistol easily accommodates other red dot optics from Leupold, Vortex, Aimpoint, and more, if desired.

The slide mass and shape is engineered to aid in increased muzzle control for double taps or longer strings of fire. A low bore axis relative to the shooter’s hand allows for a very stable sight picture no matter how many or how rapid rounds are fired.

The Trijicon RMR assisted in engaging targets at close distances with the red dot easy to pick up rapidly. The RMR red dot sight offered the capability to engage multiple targets in rapid sequence. At same time, it provided great accuracy out to 100 yards due to the red dot superimposing an aim point on the target, while not totally obscuring the target due to the dot not being that large. Trigger control is still imperative.

I quickly appreciated the FN 509 Midsize MRD’s ergonomics and handling characteristics. The grip frame with enhanced texturing and overall balance of the handgun minimized felt recoil. However, the key feature with the pistol is that it is eminently adaptable to individual carry needs thanks to the FN Optics Mounting System.

The FN 509 Midsize MRD arrives ready to go right out of the box. Kudos to FN America for including the right features to maximize performance. This pistol is a potent package in any of its possible forms due to its accuracy, reliability, and capacity; all of this combines into increased lethality.

The ability to use the it as an everyday carry handgun is what sets it apart from other endeavors incorporating red dots on pistols. It pushes the envelope past “safe” norms, while still maintaining real-world fighting application. The Midsize MRD increases the effectiveness of a concealed carry handgun beyond what many thought possible with the platform. For more information, please visit FNAmerica.com.