Nowadays, you can purchase all manner of “optics-ready” handguns, even revolvers. Reflex sights are popular because they make it easier to get on target quickly, offer unlimited eye relief and work well in low light. While all shooters can benefit from these advantages, reflex sights are especially useful for those shooters who, because of poor eyesight, handicap or age, have trouble using standard iron sights. So we decided to focus the most iconic pistol of all-time, a test of optics-ready 1911 variants for this “Battle Royale.” 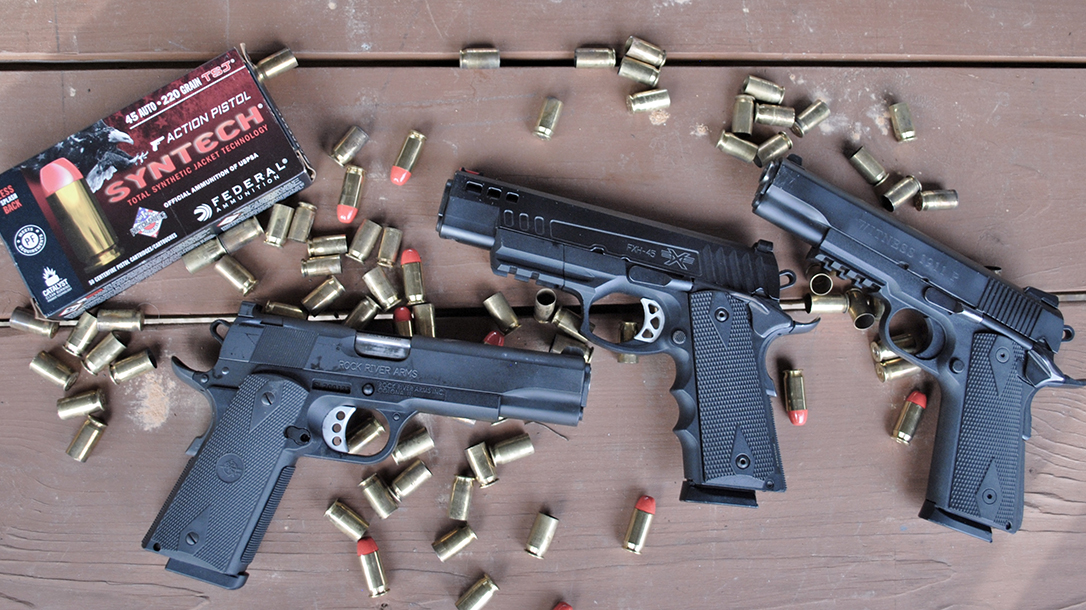 A quick perusal of websites and catalogs showed a veritable plethora of optics-ready 1911 offerings. After a bit of indecision, we finally decided on four of them: the Ed Brown FX1 RMR, Nighthawk Custom Agent 2, STI Staccato-P HOST and Wilson Combat CQB Elite.  All of them came with optical sights already mounted, though the Ed Brown is the only model whose MSRP includes the Trijicon RMR. The Nighthawk came with a Vortex Viper, while the STI and Wilson both sported Leupold DeltaPoint Pro reflex sights.

Before we go further, let’s talk about their similarities and differences. First of all, they’re all of the 1911 persuasion. The Nighthawk and Wilson have 5-inch barrels while the Ed Brown has a 4.25-inch barrel, and the STI’s is even shorter at 4.15 inches. In addition, the barrels on the Ed Brown and Nighthawk both feature crowned muzzles.

All four of the optics-ready 1911 pistols are fitted with high-profile iron sights that can be co-witnessed through the lenses of the optics. This means that if the sight’s battery wears down, the shooter can use the pistol’s iron sights. Of the four pistols, the Nighthawk, STI and Wilson have fiber-optic front sights while the Ed Brown has a Trijicon night sight. The Nighthawk also stands out from the crowd with its Interchangeable Optic System (IOS), which allows you to install a reflex sight on an adapter plate or replace it with a plate fitted with a fixed iron sight.

They all have extended thumb safety levers, but only the STI’s is ambidextrous while the Nighthawk comes standard with an extended slide stop and magazine release as well. Front and rear slide serrations, beavertail grip safeties with palm swells and extended hammer spurs grace all of the pistols. Three have skeletonized triggers while the Nighthawk follows its own path by being the only one with a flat-faced trigger and no accessory rail.

The slides on the Nighthawk and Ed Brown pistols have lightening cuts that, theoretically, keep their weights at optimum levels for reliable functioning with various ammo types. Plus, they look as sexy as all get out!

Three of our test pistols have traditional steel frames and use single-stack magazines, but the STI, with its polymer 2011 frame, accepts a 20-round magazine. For enhanced recoil control, all four pistols have checkered or textured frontstraps, mainspring housings and grips that are guaranteed to provided a secure, non-slip purchase. To help ensure fast, fumble-free reloads, they all have modest mag well funnels, although, due to its wide-body frame, the STI’s is a bit less “modest” than the rest.

Once we had the test pistols in hand, my wife, Becky, and I zeroed each from an MTM K-Zone rest at 15 yards with both their optical and iron sights and were pleased to see that all shot to the point of aim and produced groups near enough to 2 inches to keep us happy.

Then, as is our SOP, we field-stripped, cleaned and lubricated each pistol—the only maintenance they received. If one malfunctioned, we would attempt to correct the problem at the range. If we were unable to do so, the pistol would be scored up to that point and then put aside while we finished testing the remaining handguns.

My friends Richard Cole and Dick Jones helped me test the four pistols, and we decided on the following three drills:

The shooter begins facing three steel targets at 10, 15 and 20 yards. On the signal, they draw the pistol and fire 10 shots at the 10-yard target. They then perform a combat reload and fire 10 rounds at the 15-yard target. After performing another reload, they repeat the process on the furthest target. Reloading to make up misses is allowed. The score is the total time plus a five-second penalty for any misses.

The shooter faces two target stands 8 yards away with two cardboard targets sandwiching a “no-shoot target” and a Birchwood Casey World of Targets Popper in the center at 10 yards. On the signal, they draw their pistol and double-tap each target and then shoot the Popper. They then perform a combat reload and repeat the drill. The score is the total time for both runs plus a five-second penalty for any misses or “no-shoot” hits that are not made up.

To level the playing field, the three single-stack pistols were fed via 10-round magazines provided by Brownells while the STI’s magazines were only loaded with 10 rounds, and each run began with an 11th round in the chamber. This way each shooter would fire a minimum of 91 rounds from each pistol for a total of 364 from the four of them and a grand total of 1,092 by the time all three shooters are finished. Magtech provided all of that 9mm ammo while the Target Barn and Competition Electronics provided ISPC cardboard targets and a Pocket Pro shot timer, respectively.

Finally, as in previous “Battle Royales,” each pistol was graded on a 1 (worse) to 5 (best) scale in seven categories: reliability, ergonomics, trigger control, recoil control, sights, off-hand accuracy and reloading ease. These were then added together to give each pistol a final score in each category, with 15 being a perfect score. 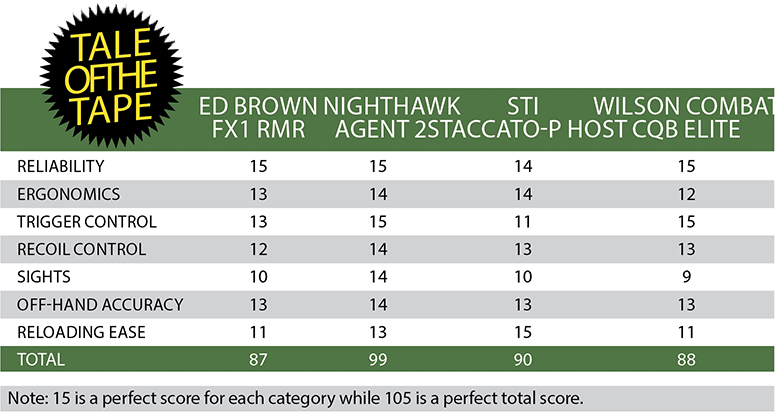 This category was a three-way tie with the STI falling just one point behind the pack because it failed to chamber three rounds, which was corrected by tapping the rear of the slide each time. Other than that, the four pistols ran like gangbusters, which can’t always be said of an out-of-the-box 1911.

One shooter said that the STI’s “shorter length made it feel faster.” Even though all four had their controls in the “correct” positions, one shooter felt the STI’s wide grip made accessing them a bit difficult.

The Nighthawk and Wilson had excellent, crisp triggers while the Ed Brown’s was a bit heavier. The STI’s trigger felt the heaviest with a longer take-up. We all felt that the Nighthawk’s flat-faced trigger was the way to go.

All three of us agreed that the RailScales texturing on the Nighthawk’s frame and grips provided excellent control without the abrasiveness caused by the sharp checkering on the Ed Brown and Wilson Combat pistols, making it very comfortable to shoot extensively. As a confirmed fan of single-stack 1911s, another shooter found the STI’s wide grip frame uncomfortable. And we all agreed that the lighter weight of the STI and Ed Brown pistols accentuated felt recoil, slowing down follow-up shots.

None of us had extensive experience with reflex sights, so this was a learning experience. The most common complaint was that acquiring the dot for the first shot took an inordinate amount of time, but after that, transitioning between targets was rather easy. The Wilson’s high front sight came under criticism, as it obscured the dot during rapid fire, while the concave top of the Trijicon RMR on the Ed Brown made the screen seem smaller and interfered with the sight picture.

All four pistols provided more than acceptable accuracy for defensive shooting. The Nighthawk pulled slightly ahead in this category thanks to its excellent recoil control.

We did a lot of reloading with these pistols and felt that the STI owned this category thanks to its gaping mag well. The Nighthawk came in second place thanks to its extended magazine release and slide stop. The Wilson Combat and Ed Brown trailed behind because their magazines failed to fall free as the pistols became dirtier.

All in all, the pistols’ performances were quite similar, and we agreed that they would all serve quite well for anyone who wanted to use an optic-equipped 1911 for defensive purposes or police service

Before they departed the range, I asked my two associates which of the four pistols they felt was the winner, and both agreed that it was the Nighthawk. They both said it did everything they needed it to, and there was nothing to dislike about the pistol. Plus, they both felt it was the sexiest-looking of the pistols. (Groan!)

While I almost made the decision unanimous, in the end my vote went for the STI. I felt its hand-filling grip provided better handling characteristics. I also prefer ambidextrous safeties, and the ability to use higher-capacity magazines was a major plus.

Of course, you might be taken aback by the price tags on these pistols. But you must remember that they’re truly works of art and worth every penny. Quality has a price, and as you’ve probably heard before, “Would you want to bet your life on a firearm made by the lowest bidder?”