It’s been more than two years since I was first introduced to the Ruger GP100 in .327 Federal Magnum specially made for Lipsey’s, a major firearms distributor in Baton Rouge, Louisiana. The 5-inch, half-lug barrel, blued finish and smooth walnut grips immediately grabbed my attention. This is what a double-action (DA) revolver should look like! That model held seven rounds in its cylinder, and the performance was quite impressive. 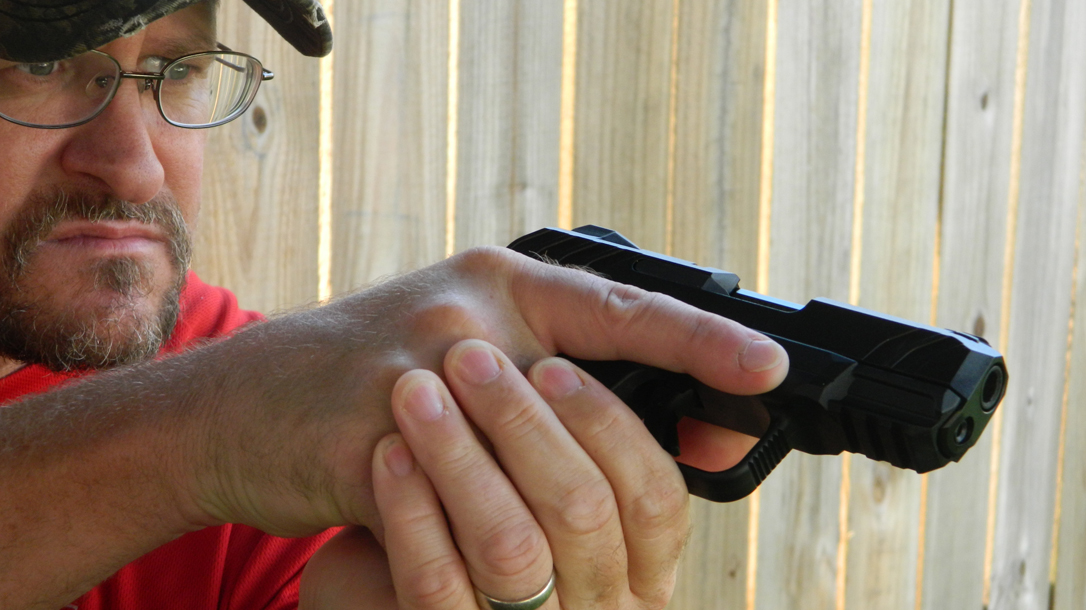 Two more Lipsey’s exclusives followed in .357 Magnum and .44 Special. These revolvers all essentially look alike but have different capacities and bore sizes. And this year, Ruger and Lipsey’s have unveiled another in the same style, this time in 10mm Auto.

Like the .357 Magnum version, this new 10mm is a six-shooter, but since it chambers a rimless cartridge made for autoloading pistols, Ruger provides moon clips. These clips hold six cartridges and allow the extractor star to eject empty cartridge cases when the ejector rod is pushed in toward the cylinder. Three clips come with each revolver. The revolver headspaces on the mouth of the cartridge, so it will shoot without the clips, but then the cases have to be picked out individually. The cylinder will also accept .40 S&W cartridges with the moon clips.

In case you’re unfamiliar, the Ruger GP100 has been around since 1985. It succeeded the Ruger Security-Six with a heavier frame and a beefier lockup system to handle full-time use of .357 Magnum cartridges. Most GP100 revolvers have a full underlug beneath the barrel, but each Lipsey’s GP100 uses a half lug, giving a profile that’s similar to the old Security-Six. Another unusual feature is the barrel length. I’m a fan of 5-inch barrels, but they haven’t been available on production DA revolvers for quite some time. To top it off, the barrel has a full-length rib up top, and the front sight is a gold bead. The fully adjustable rear sight is steel with a white outline around its square notch.

The single-action (SA) trigger pull on my 10mm test gun weighed 5.06 pounds on average with no take-up, a touch of creep and no overtravel. The DA pull was smooth, weighing around 13 to 14 pounds with a little “snick” just before the hammer fell. The trigger itself is smooth-faced for comfort, and the hammer has a flat, checkered spur. GP100 revolvers have grip pegs rather than grip frames, so there are no steel front- or backstraps.

The smooth, Roper-style grips are ergonomic and feel good in my medium-size hands. Their shape also helps absorb recoil and enhances shot-to-shot recovery in rapid fire. They’re attractive, too, with what looks like a hand-rubbed finish and Ruger medallions. Overall, the gun gets very high marks in the fit and finish department. It comes in a plastic case with a safety lock, a takedown pin, the owner’s manual and moon clips.

I chose five different 10mm loads and one .40 S&W load for this test, with bullet weights ranging from 122 to 230 grains. To pack the Lipsey’s GP100 10mm on my belt, I had Rob Leahy at Simply Rugged Holsters make me one of his Sourdough Pancake holsters. His leather products are constructed from 8- to 9-ounce Hermann Oak beef hide, and I had mine finished in black. This is a high-riding, open-top belt rig that can be worn on the hip or in a cross-draw position. It has three 1.75-inch belt slots, and the molding offers good retention. The holster encloses the entire revolver but leaves the back of the triggerguard exposed for a good grip on the gun, allowing for quick draws. To carry the moon clips, I used vintage HKS speedloader carriers that I altered for the task.

Per my usual test protocol, the first task was to chronograph the test ammo and get velocity data before moving on to the accuracy portion of the evaluation using Birchwood Casey Eze-Scorer bullseye targets set at 25 yards. My best group measured 2.02 inches with the Winchester 180-grain Defender JHP cartridges. The group averages ran between 2.08 and 2.53 inches with the 10mm test ammo, and the single .40-caliber test load had a 2.77-inch average for three 5-shot groups. The 10mm “duplex” load from DoubleTap performed as advertised, and I got an instant double-tap with each shot fired. My last bullseye target had 10 holes in it. Only one strayed off target. All of the shooting was done in SA mode over a sandbag rest.

I really like the white-outlined rear sight notch and gold bead front sight. The Ruger moon clips are also easy to load by hand. For stripping out the empty brass, TK Custom offers a tool that resembles a fat screwdriver. You put the open end over the brass, turn the tool and off comes the case, which then falls inside the hollow tube of the device. The tube will hold six empties.

After establishing the GP100’s inherent accuracy, it was time to do some practical shooting with the GP100. I strapped the Simply Rugged holster and HKS double speedloader pouch onto my belt and loaded up two moon clips with a mix of 10mm ammo. For the initial six rounds, I put in four of the .40 S&W cartridges with a couple of 10mm rounds. Then I set a reduced-size B-27 Dirty Bird silhouette target from Birchwood Casey 15 yards downrange.

I used my tried-and-true 30-round combat qualification course for this evaluation. I fired 12 rounds singlehanded, using a point-shoulder stance, at 3 yards, obviously reloading between each string of six shots. All of this shooting was done in DA mode and began with the GP100 in the holster. Reloads were performed as needed, and I made sure to scan the area for more “threats” before reholstering. I then fired three double-taps at 7 yards before performing a failure-to-stop drill (two shots to the chest and one to the head) at the same distance. Next, I moved back to fire from behind a barricade—two shots standing on the right and left sides, and two shots kneeling on the right side—from 15 yards.

The smaller B-27 target made things at bit more challenging, but I kept all of my shots in the blue area. One grazing shot was caused by some cylinder binding that caused me to jerk the DA trigger a bit too hard. All but seven hits were in the 9, 10 and X scoring rings, and my headshots hit dead on.

I could really tell when the harder-shooting 10mm loads came under the firing pin, but the sixgun’s Roper-style grips and balance helped with the shot-to-shot recovery. The longer 5-inch barrel really wasn’t an issue as far as presentations from the holster were concerned, and I easily reholstered without having to take my attention from the potential threat area. The moon clips worked just like speedloaders, and since I cut my teeth on wheelguns and speedloaders as a young law enforcement officer, this did not present an issue to me. I do suggest bringing the revolver up into your peripheral vision to make loading easier and keeping an eye on the threat area. Ejected brass casings from the moon clips worked just fine, too.

Many readers may be drawn to this new Lipsey’s exclusive GP100 in 10mm for its hunting applications, and it should work well on varmints on up to medium-sized game. I didn’t do any testing in this regard. But whatever your reason might be for wanting a 10mm revolver, I think this special Ruger GP100 from Lipsey’s will more than fit the bill.