We reported earlier how Dianna Muller made national headlines, and arguably cemented a folk legend status in the firearms community, when she told the House Judiciary Committee “I will not comply” with an assault weapon ban. Di rocked for sure. But equally impressive, in a quite measured performance, Amy Swearer delivered the most important testimony of the entire hearing. 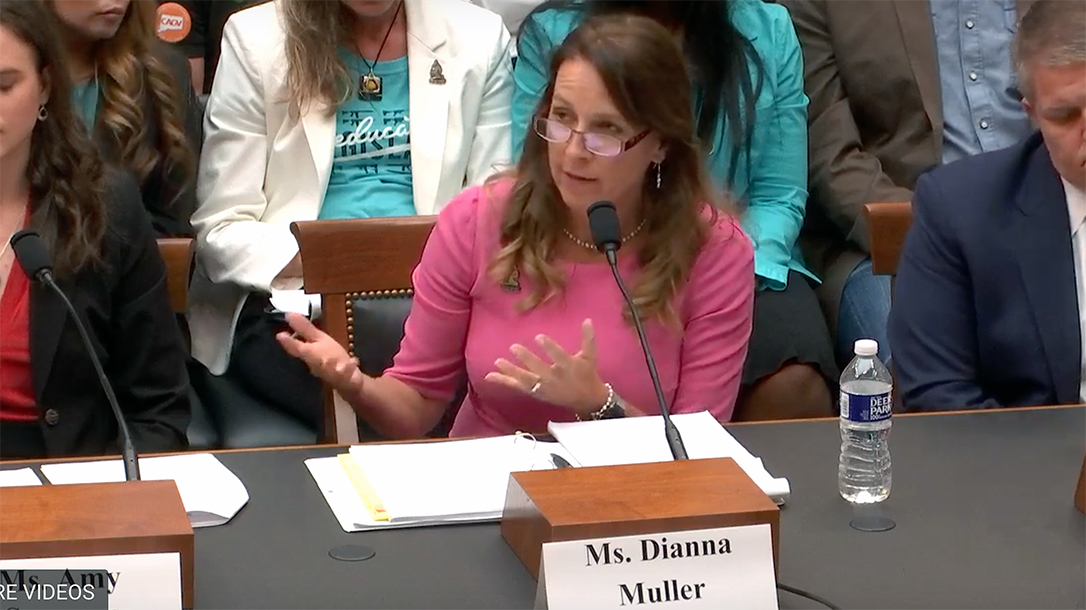 During Swearer’s opening remarks, she read a prepared statement that showcased her deep knowledge of the subject. As a Senior Legal Policy Analyst with several published pieces, Swearer clearly conducted exhaustive research on assault rifles. She also has facts on crime statistics and the 2nd Amendment.

Then she simply schooled those in favor of an assault weapon ban.

Swearer gave a compelling argument that previously banned features make rifles safer, not more dangerous. She argued statistics show overwhelmingly that rifles don’t pose a great danger to society. Swearer showed that law-abiding citizens purchase these guns. And they use them for lawful purposes. Finally, Amy Swearer makes a point that AR-15s and the like give law-abiding citizens a chance against assailants.

Above all, Swearer showed the hypocrisy and fallacy of the anti-gun movement. Now let’s hope the politicians will listen.

“The term ‘assault weapon’ does not have one official definition, but typically denotes firearms that have a range of features associated with modern semi-automatic rifles such as the AR-15,” Amy Swearer read from her prepared statement. “It should be noted that the phrase ‘assault weapon’ is not a technical or legal term, but rather appears to have become popular as part of a concerted effort by gun control advocates to manipulate those with limited knowledge of firearms into confusing certain semi-automatic rifles with ‘assault rifles,’ which are functionally distinct and heavily regulated by the federal government.”

We all remember the inept restrictions of the previous AWB, limiting pistol grips, bayonet lugs, barrel shrouds and more. Swearer points out that gun control advocates typically attack such accessories and features. While they in no way change the functionality or legality of the firearm, they sure look scary. But in practice, a ban on these accessories takes away accessories that promote better marksmanship and better control. In effect, it makes the guns less safe.

“In short, proposals to ban ‘assault weapons’ are, for all intents and purposes, proposals to force law-abiding citizens to use firearms that are harder to fire accurately and more likely to cause them injuries, even when being used for lawful purposes.”

The attack on semi-automatic rifles shows an incredible level of hypocrisy from gun control advocates. Statistically speaking, AR-15s don’t constitute a problem. If this is really about safety and human life, the numbers point to handguns. However, the left knows that’s a much harder sell. With that in mind, they’ve demonized the black gun, painting it the mass murderer weapon of choice.

“Far from being the weapon of choice for would-be criminals, semi-automatic rifles are statistically the type of firearm least likely to be used for unlawful purposes, particularly compared to handguns,” Swearer said. “Over the last decade, rifles of any kind were definitively used in only 3-4 percent of gun homicides, and it is not clear how many of those deaths actually involved the use of ‘assault weapons’ compared to other types of rifles. The average American is, in fact, four times more lkely to be stabbed to death than he or she is to be shot to death with a rifle of any kind.

“Gun control advocates, politicians, and the media routinely characterize semi-automatic rifles, specifically the AR-15, as the ‘weapon of choice’ for mass public shooters,” Swearer continued. This is objectively incorrect. Over the last decade, more than half of mass public shooters have used handguns alone. Of those who did use rifles, the majority also brought other firearms, such as shotguns or handguns.”

The left likes to paint black gun ownership as a recent phenomenon. Additionally, gun control advocates often portray the AR-15 as a weapon of war. They say it’s used only to kill innocent civilians by mass murders.

“Over the last several decades, there has been a concerted effort by gun control activists to characterize certain semi-automatic rifles as ‘weapons of war’ that have ‘no business on our streets,'” Swearer said. “Ostensibly, this is to create the impression that the cosmetic features associated with firearms like the AR-15 serve no legitimate civilian purpose, and render a firearm objectively inappropriate for lawful uses like hunting, recreational target shooting, or self-defense. On its face, this is an absurd premise.”

“Moreover, federal law enforcement agencies refer to even select-fire AR-15 style rifles as ‘personal defense weapons,’ Swearer continued. “… It is little wonder, then, that many law-abiding citizens also rely on semi-automatic rifles as their own personal defense weapons, particularly in situations where law enforcement cannot protect the. Far from needing to be better protected from these rifles, law-abiding Americans benefit when they are allowed to defend themselves with them.”

To close, Swearer told the story of a woman who grew up uninitiated to firearms. She went decades before ever handling one, until her daughter took her to the range. They shot a handgun that day. The woman, according to Swearer, proved a terrible shotgun with a handgun from a mere few yards away. But then the woman picked up an AR-15, and she produced “a fist-sized grouping of lead in the center of that target from 20 yards out.”

That woman is Swearer’s mother.

“Now, I pray that my mother is never confronted with a situation where she is compelled to point a firearm at another human being, much less pull the trigger,” Swearer said. “I would infinitely prefer to live in a world where I never have to consider the possibility that someone would threaten her life or the lives of those around her.

“God forbid that my mother is ever faced with a scenario where she must stop a threat to her life,” Swearer continued. “But if she is, I hope she has a so-called ‘assault weapon’ to end that threat.”