If you are a regular reader of Combat Handguns magazine, you know that we have been a fan of Canik pistols for a long time. The performance, ergonomics and looks combine with a price point that almost makes you want to buy two, just because. As of this writing, the new Canik TP9 Elite SC shown here hasn’t even been released yet. That’s how hot and fresh this giveaway is! So let’s get into the details of what’s included with this special giveaway. 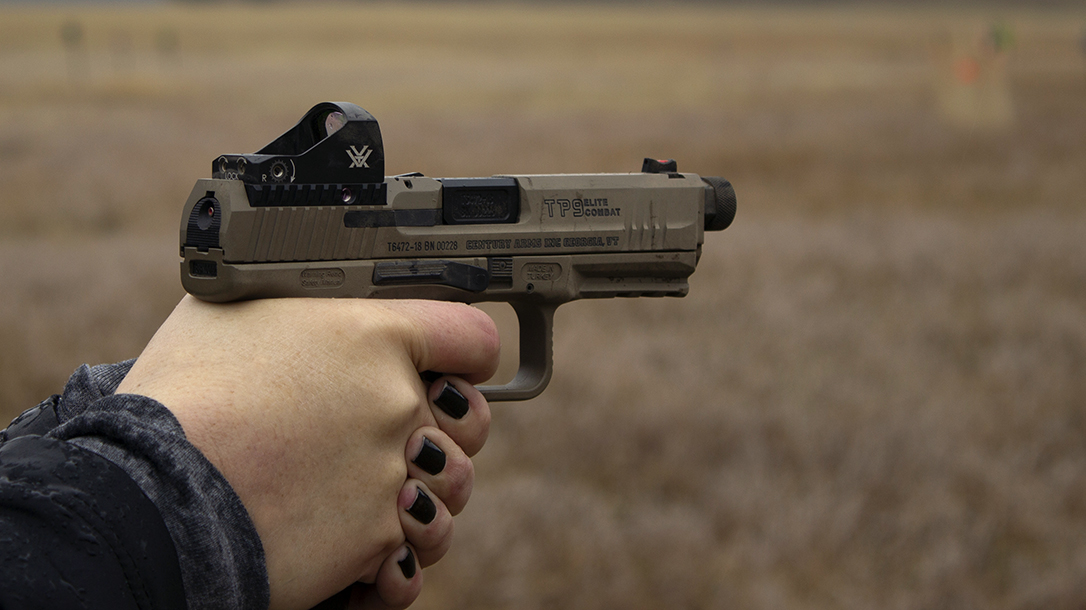 This new pistol marks the first subcompact in Canik’s popular TP9 line. With its 12-round magazine in place, the pistol is 4.57 inches tall; that’s almost 0.75 inches shorter than it’s slightly bigger brother, the TP9SF Elite. The TP9 Elite SC also comes with all the other goodies you’d expect from Canik, including two interchangeable backstraps, a striker-status indicator, an ambidextrous slide stop, a loaded-chamber indicator, a reversible magazine release, a Picatinny rail, a standard 12-round magazine as well as an extended 15-rounder, a cleaning kit and a CCW holster that can be set up for IWB and OWB carry.

While the standard model comes with a match-grade, nitride-coated barrel, the giveaway pistol features a threaded barrel for suppressor use. And along with internals coated in either nitride or high-wear nickel, the gun is upgraded with an Enhanced Combat Trigger. Oh, and the TP9 Elite SC comes ready to accept a miniature reflex sight, which is a good thing because we’ve included a Shield Reflex Mini (RMS) in this giveaway.

It’s become very popular over the last few years to run miniature reflex sights on pistols. Although the combination isn’t for everybody, it does have some advantages, including a faster sight picture, easier low-light and long-range engagements, and a clearer point of aim for shooters with eyesight issues. This brings us to the RMS.

Designed without a red reflective coating on the lens to minimize its visual signature, the Shield RMS features an aerospace-grade aluminum housing and a clear polymer lens. The brightness is controlled by a variable-intensity drive circuit that senses ambient light levels and controls the LED output, ensuring you always have optimum visibility. Less than an inch tall and weighing just more than half an ounce, the RMS is unobtrusive. The short base allows for co-witnessing with standard-height iron sights.

A compact light for a compact pistol, the PL-MINI 2 Valkyrie is anything but small in performance, putting out a night-into-day 600 lumens. You can quickly recharge this light magnetically, meaning there is no need to remove the battery or worry about a plug that might wear out over time. Its quick-release adapter works in conjunction with a sliding rail adapter so you can quickly set the light to the desired position, then lock it in place with the swing arm. Being able to remove and attach the light with little hassle and no tools is very convenient when it come to changing holster/carry options where the light may not be necessary.

All the bells and whistles on a new pistol do you no good unless for have ammunition for it! That’s why we reached out to Aguila to help get you shooting right out of the box. In this case, we’ve included Aguila’s latest 300-round 9mm bulk pack. At a factory velocity rating of 1,150 fps, these 115-grain FMJs strike the perfect balance of power and recoil for carry and training applications.

*No purchase required. Open to U.S. residents only and void where prohibited. Prizes worth $1,210. Sponsored by Canik and Aguila. Starts 9/3/19 and ends 10/28/19. Visit personaldefenseworld.com/win-canik for details, eligibility and a complete list of official rules.

Enter here if you are having issues entering on this page.

This article is from the November/December 2019 issue of Combat Handguns Magazine. Grab your copy or subscribe at OutdoorGroupStore.com.