2
SHARES
1.7k
VIEWS
Share on FacebookShare on Twitter
It would be hard to find someone who doesn’t have a healthy respect for buckshot. A well-placed load of buckshot is one of the surest ways to stop a close-range deadly assault. Does it always work? No, but in the book Stopping Power: A Practical Analysis of the Latest Handgun Ammunition, Evan Marshall and Ed Sanow found that 00 buckshot stopped gunfights at least 90 percent of the time when at least six pellets struck the torso. Smaller-sized buckshot was a little less effective, but not by much. 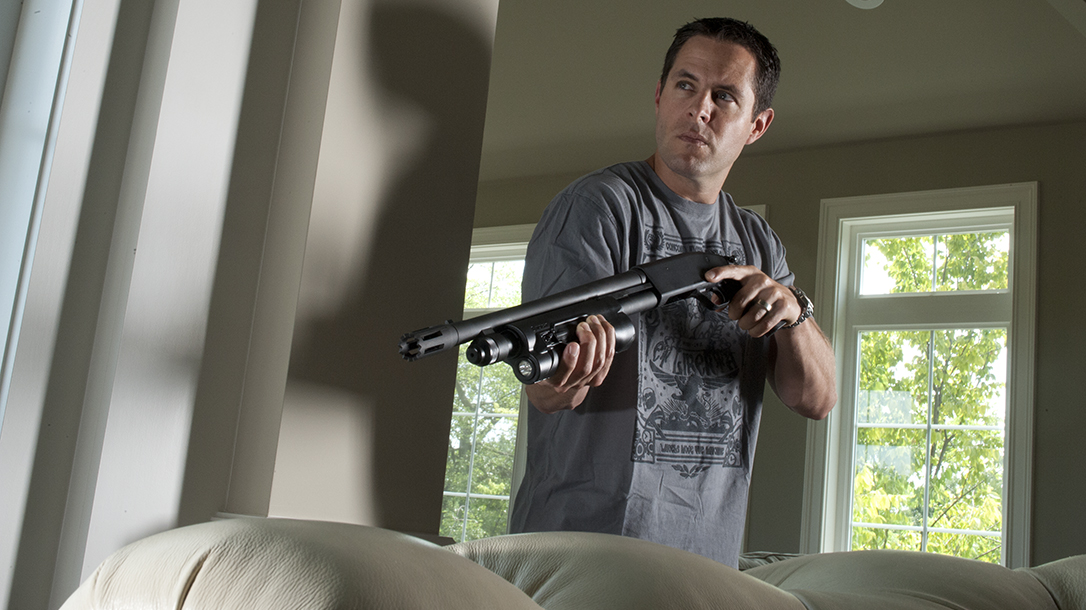 In addition, their data on buckshot penetration tends to support the conclusion of forensic pathologist Dr. Vincent Di Maio. His book Gunshot Wounds: Practical Aspects of Firearms, Ballistics, and Forensic Techniques states that buckshot usually doesn’t penetrate through-and-through on torso hits. This is due to buckshot’s relatively light weight and low sectional density. The result is the reduced possibility of collateral damage, as long as care is taken to pattern one’s gun at several distances and not shoot beyond the range at which all pellets have a high probability of hitting the target. Because it combines high rates of stopping power with controlled penetration, buckshot is a natural choice for close-range personal defense.

In the wide-open spaces of the Old West, the double-barrel 10-gauge coach gun may have made a lot of sense, but in today’s urban and rural areas, most people are best served by a 12 gauge firing 2¾-inch ammunition. Why? The 12 gauge generates a lot less recoil than the 10 gauge, and 2¾-inch ammo has more than enough power for defense. In fact, Federal’s nine-pellet Personal Defense 00 buckshot load delivers 1,575 foot-pounds of energy (fpe) at the muzzle, which is about three times the energy of a .357 Magnum round.

Hornady’s eight-pellet Critical Defense 00 load delivers 1,872 fpe, which is about twice as much as a .44 Magnum round. I prefer the Federal load with the FliteControl wad in my lightweight Remington 870 Express Tactical because it patterns the tightest in this particular gun and also generates the lowest recoil. Less recoil allows me to make faster follow-up shots—if any are necessary.

However, my experience over the last 30 years has shown that some of the low-recoil tactical loads have not been as reliable in semi-auto shotguns. Therefore, I prefer the Hornady Critical Defense load or Remington’s full-power TAC 8 shells in my Remington Model 1100 deer gun. Again, it’s a matter of finding a load that is both reliable in your gun and throws tight patterns to reduce the risk of collateral damage.

As for the magnum 2¾-inch and 3-inch 00 loads, I’ve never had these pattern tighter than the eight- or nine-pellet loads. The 00 magnums may be good for shooting running deer, where a wider pattern and more pellets make good sense, but for personal defense, my preference is to stay with the eight- and nine-pellet 00 loads that use plated and/or hardened shot, since they tend to pattern best. Well-known defensive shotgun trainer Tom Givens of Rangemaster Firearms Training Services recommends 12-gauge, eight-pellet, 00 buckshot loads for personal defense because eight 00 pellets tend to stack more evenly in 12-gauge, 2¾-inch shotshells than do nine.

Some people prefer 16- or 20-gauge shotguns, or even .410s, because they have less recoil. Even though these shotshells hold less powder and shot than 12-gauge ammo, the guns that shoot these smaller shells are usually quite light and still kick to a degree when firing buckshot. That’s especially true of the 3-inch, 20-gauge Federal Vital-Shok and Personal Defense loads.

The only .410 shotgun I’ve used with buckshot was an S&W Governor. It patterned very tightly with Federal’s 000 buckshot Handgun ammo, and was an impressive close-range self-defense gun. If I were to switch to a .410, I’d try the Federal Handgun, Hornady Critical Defense, Remington Ultimate Defense and Winchester 000 loads to see which one recoiled the least and patterned best in my gun. The only buckshot load available in 16 gauge is a Federal Power-Shok loaded with 12 pellets of #1 buckshot, so there isn’t much of a choice.

On the other hand, every gun patterns differently, so I took my 12-gauge Remington 870 Express Tactical to the range to fire four loads to provide examples of how one gun can shoot very different patterns with different loads. I’ve customized this gun by replacing the factory-installed cylinder-bore choke tube with a Rem Choke modified tube. That’s because my personal experience and work in law enforcement have shown that 12-gauge guns usually shoot tighter patterns with a modified choke. I also mounted a Nikon P-Tactical Spur 3-MOA reflex sight and a Crimson Trace Rail Master Pro green laser/100-lumen LED light, making my 870 both fast and accurate day or night. Always remember that you must aim a shotgun, because it’s possible to miss the target entirely.

12 Gauge Buckshot On the Range

I fired one shot with each load at the head of a full-sized silhouette target 7 yards away, and one at the center of the target’s chest at 15 yards. Each load kept all of its pellets in the head at 7 yards, although the Super-X hunting load clearly shot the largest pattern. At 15 yards, the area of the pattern of the Federal load remained essentially the same as it was at 7 yards. The other loads shot patterns that were wider at 15 yards than at 7 yards, and the Remington #4 load increased the most in area. In general, my experience has been that #4 buckshot patterns get larger very quickly as the distance from the gun to the target increases. See the included table for more results. 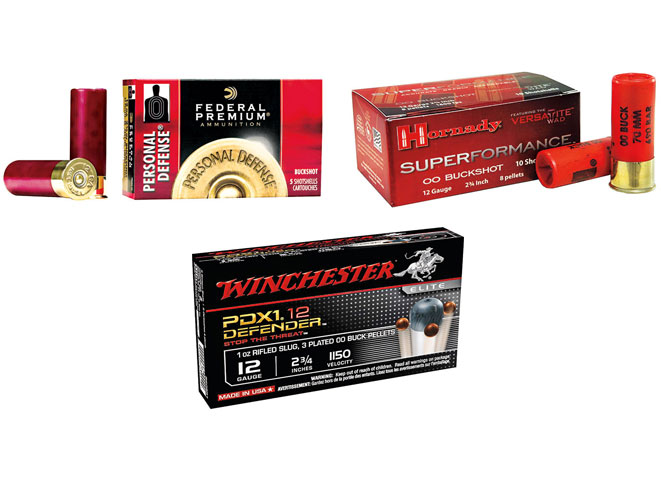 When selecting buckshot for personal defense, shooters must reconcile their recoil tolerance and the risk of collateral damage where they live with a specific load’s reliability and patterning in their gun. No one should limit their choices to the loads I’ve discussed. The ones I prefer have simply been the ones that performed best for my needs in the guns that I’ve used. In the end, the right choice is one that’s well reasoned and made with the understanding that the defensive role of buckshot is primarily personal and home defense at distances that rarely exceed 15 yards.