Ballistic overmatch is the goal in any lethal force encounter. While most modern-day weapon platforms do their best to bring this principle to bear, the standard everyday AR-15 sometimes falls short. Yes, the 5.56 round carries real-world power, but when everything is on the line, I prefer something with a little more punch. Springfield shares my sentiment and has seen fit to launch the newest member of its Victor line: the SAINT Victor .308. 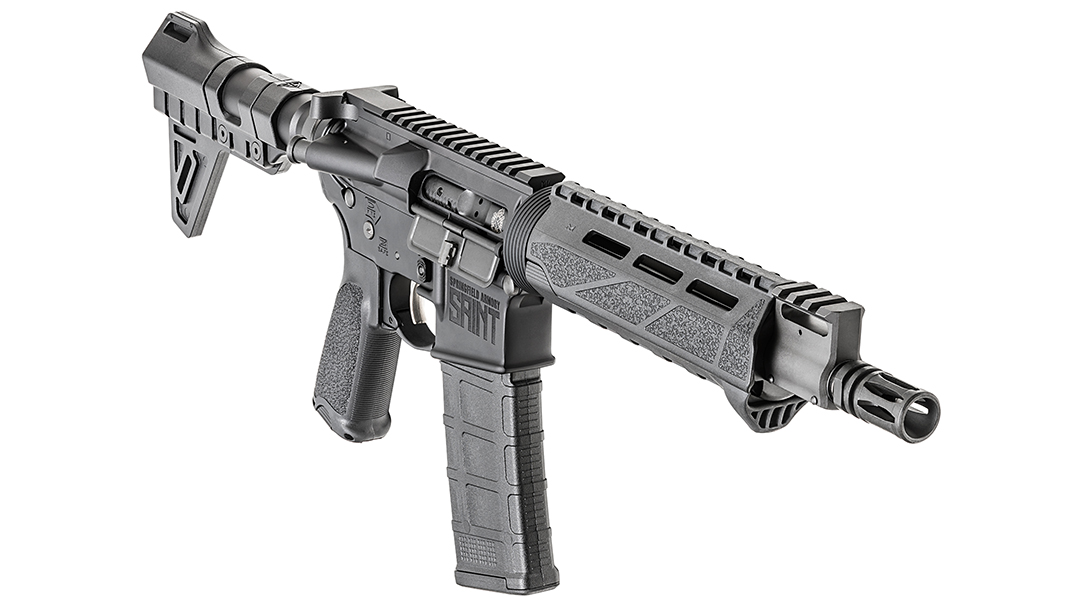 Many people are surprised to learn that their beloved AR-15, originally built by Eugene Stoner, was to be chambered in .308. This hard-hitting round proved itself in war and has no hesitation to punch through barrier and material that 5.56 cannot defeat.

In modern applications, the .308 version (AR-10) has been pretty much pushed into the long-range precision rifle realm. The weight and overall size of the standard AR-10 makes it a bit unwieldy and clumsy as a personal protection weapon; however, the team over at Springfield has remedied that with the new SAINT Victor .308. This gun merges the power of a .308 with the lightweight mobility of an AR platform.

This hard-working blaster comes in at just 7.8 pounds and is purpose-built for real-world applications. My personal opinion is that it is an exceptional personal protection rifle. It would also serve well in hunting because of its light weight and serious caliber.

The gun has some great features including an M-LOK aluminum free-float handguard with patent-pending Springfield locking tabs for unlimited customization. The furniture on the gun is from BCM and includes its 6-position stock and pistol grip. Another nice touch that gives a tip of the hat to a more tactical application is the inclusion of QD mounts on the gun. Springfield built them into the end plate and stock, offering multiple options to suit your sling configuration preference.

While we are on “nice touch” items, the inclusion of an enhanced nickel boron coated single-stage flat trigger is a winner. It provides a consistent grit-free press and clean break, which means everything to serious shooters. The barrel is a 16-inch lightweight profile with CMV Melonite finish. Springfield topped off the barrel with its own muzzle brake. It does a great job at driving spent gasses upward and outward, which allowed me to get back on target in a hurry.

Lastly in our quick overview, the gun comes complete with good quality Springfield spring-loaded flip-up iron sights that are adjustable for windage and elevation. This is nice, as many companies have ditched the inclusion of sights to save a little on the bottom line.

Performance-wise the gun is a winner. I ran it extensively at the recent 2019 Athlon Outdoors Rendezvous in Driggs, Idaho. I have had the fortune of running about a billion different AR-style rifles over the years and was impressed with the SAINT Victor. It felt much more like a regular AR-15 than a .308 rifle.

Fit and finish of the gun were solid. When I mean solid, I mean solid. There was no play in the handguard or between the upper and lower. Springfield uses a system called Accutite to ensure there is no play between the upper and lower. It works well as it felt like a single component. The gun comes with a pinned adjustable gas block as well as a key and five different gas plugs. This allows you to really customize the gun to your ammo and a suppressor should you choose to use one.

The bolt in the gun is a steel unit coated in Melonite which makes for a long life and easy cleaning. As I mentioned, the trigger is a flat face enhanced nickel boron coated single-stage flat model and was better than I expected. I say that because of the price of the gun. While some companies ditch any effort to provide a good trigger to keep cost down, Springfield brought its A-game and included a great trigger. The gun I ran had only seen about 100 rounds and the trigger was already butter smooth. Even the gun I received afterwards for additional T&E had a good press right out of the box. As normal, it had a bit of a grab in it, but it would disappear in just couple mags.

Shooting the gun was a blast (forgive the pun). While we had steel all over the range at 100 yards, 300 yards and even a mile, I focused on targets at 50 yards and closer. Could I bench the gun and reach out to long-range distances? Sure, but I don’t see this as that type of rifle. This is a bad day, multiple-threat neutralizing fight stopper. The muzzle brake did a good job at keeping rise in check as I quickly moved from target to target. The gun cycled flawlessly as we fed it an absurd number of magazines filled with Federal 150-grain rounds. Yes, the rifle was a bit “barky” to those on the left and right of the muzzle brake, but that’s life. The gun was accurate and equally important it was fast.

My parting impressions are that the Springfield AR-10 is a home run on three points. First, Springfield succeeded in building a lightweight AR platform rifle chambered in .308. Second, Springfield has done this with a solid design and great manufacturing. Lastly, the gun retails for only $1,399. In the wild I expect it to be even more affordable. That is a lot of gun for the money.

I enjoyed my time on the rifle and would encourage you to get some rounds though it as well. For more information, visit springfield-armory.com.