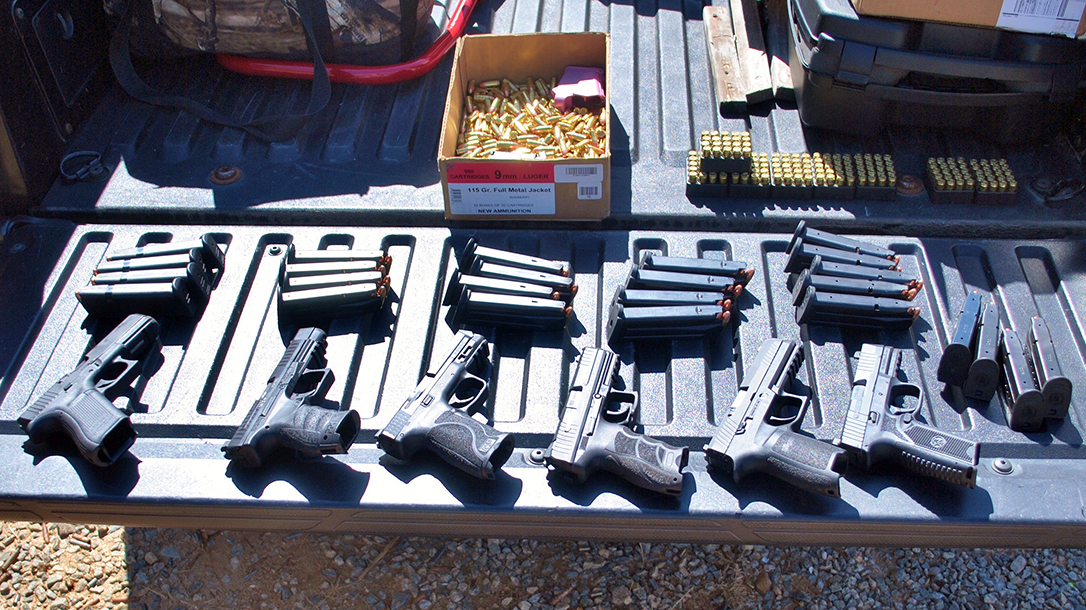 What’s the best 9mm pistol when talking about modern police sidearms? We’ll get there. Before we do, I can remember a time when if you saw a police officer, you could have bet that their sidearm was a revolver. It would have been a blued Smith & Wesson, Colt or Ruger wheelgun in .38 Special with a 4-inch barrel. Then, thanks to growing urban violence in the 1960s, many police agencies switched to more powerful .357 Magnum revolvers. While some dared to suggest that semi-automatic pistols might be more practical police sidearms, these calls were considered so radical that they were generally ignored.

This all changed in 1985 when the U.S. Army adopted the 9mm Beretta 92 pistol as the M9. Much to the dismay of the traditionalists among us, this encouraged American police agencies to ditch their wheelguns and adopt higher-capacity 9mm pistols. It wasn’t long before duty revolvers became quite scarce, replaced by “wonder-nine” semi-autos from Beretta, Sig Sauer, Smith & Wesson, Walther and other companies.

The introduction of the Glock 17 began the so-called “polymer revolution,” and today, just about every handgun maker of note offers a “plastic pistol” suitable for police and military service. The simplicity, affordability and practicality of polymer-framed pistols have made them the handguns of choice among U.S. law enforcement agencies.

But dissatisfaction with the performance of early 9mm hollow-point ammunition led to calls for a more authoritative round, which resulted in the development of the .40 S&W cartridge. Introduced in January 1990, it quickly displaced the 9mm pistols used by most departments, and the .38 and .357 revolvers still in service. Currently, the .40 is the most widely used police handgun cartridge in the nation, although it appears that situation is changing.

Which brings us to the subject of this “Battle Royale.” I decided to pit today’s most popular 9mm duty pistols against each other to see which one would come out on top at the range. The guns included the FN 509, Glock 17 Gen5, Heckler & Koch P30, Sig Sauer P320 Full-Size, Smith & Wesson M&P9 M2.0 and the 5-inch-barreled Walther PPQ M2.

Right off the bat, all six test guns have polymer frames and steel slides. The HK and Walther pistols use 15-round magazines while the rest use 17-round magazines. In terms of operation, five are striker-fired designs while the HK P30 follows the beat of a different drummer with a traditional double-action/single-action (DA/SA) trigger system. This means that the HK is the only gun in the shootout with an external hammer. The others use strikers for ignition. To safely lower the HK’s hammer on a loaded chamber, you depress a serrated decocker on the backside of the slide.

Five of the pistols come with interchangeable backstraps, and the HK goes one step further by allowing shooters to replace the side panels as well for a truly customized grip frame. For the P320, Sig offers three different full-sized grip modules, allowing you to replace the entire frame. You can also transform the pistol into carry, compact and subcompact configurations with the right grip module, barrel and slide.

Five of the guns have magazine releases located in the “proper” position and are either ambidextrous or could be easily switched from left to right sides, but again, the HK differs in that its release is an ambidextrous paddle located under the triggerguard.

While the manufacturers offer various sighting arrangements as options, the Glock, Sig and Walther stood out with their AmeriGlo, SIGLITE and TruGlo tritium sights, respectively, making them highly visible in low-light conditions. Finally, as befits pistols designed for police service, all six have rails for mounting lights, lasers and other tactical accessories, and they all weighed less than 30 ounces unloaded, making them comfortable for all-day carry.

Once we had all the test pistols in hand, my wife, Becky, and I zeroed each model from an MTM K-Zone rest at 15 yards. All six shot to the point of aim and produced groups ranging from 1.75 to 2.25 inches, which we felt was more than satisfactory for their intended purpose as police/defensive handguns. We then field-stripped, cleaned and lubricated each pistol—the only maintenance they received. If one malfunctioned during the face-off, we would attempt to correct the problem on site. If that wasn’t possible, the pistol would be scored up to that point and then put aside while we finished testing the remaining handguns.

As in past “Battle Royales,” my friends Dick Jones and Richard Cole joined us for the range session, and we decided on the following drills:

In this drill, the shooter begins facing 12 steel plates painted alternately white and blue. From 8 yards, he lifts his pistol and engages the white plates until they’re all are down, then performs a combat reload and engages the blue plates. The next run is the same, except the shooter begins with the blue plates and then transitions to the white plates. The score is the total time for both runs plus a five-second penalty for hitting the wrong plate out of sequence or leaving one standing.

The shooter faces three steel targets at 10 yards. On the signal, he lifts his pistol and double-taps each target, then performs a combat reload and double-taps each once again. The drill is repeated three more times. The score is the total time for the four runs plus a five-second penalty for any miss.

The shooter faces two target stands 8 yards away (with two cardboard targets sandwiching a “no-shoot target”) and a Birchwood Casey World of Targets Popper in the center at 10 yards. On the signal, they draw their pistol and double-tap each target and then shoot the Popper. They then perform a combat reload and repeat the drill. The score is the total time for both runs plus a five-second penalty for any misses or “no-shoot” hits that are not made up.

We ended up expending over 2,000 rounds of ammo generously donated by Black Hills Ammunition (black-hills.com). The Target Barn and Competition Electronics provided ISPC cardboard targets and a Pocket Pro shot timer, respectively. Finally, as in previous “Battle Royales,” each pistol was graded on a 1 (worse) to 5 (best) scale in seven categories: reliability, ergonomics, trigger control, recoil control, sights, off-hand accuracy and reloading ease. These were then added together to give each pistol a final score in each category, with 15 being a perfect score.

As can you can see in the included table, the Glock, S&W and Walther tied with perfect scores in the reliability department. The Sig got dinged for a few failures to feed and eject, and the FN failed to ignite eight different cartridges.

This is a very personal call, but the S&W only lost one point, and the Walther was a single point behind it because one shooter felt the grip was too short and didn’t care for the finger grooves. The FN’s magazine release received some criticism as being a bit difficult to manipulate, and it was unanimous that the Sig’s grip frame was too narrow. We all noticed that the Glock tended to point high upon presentation while the HK’s paddle magazine release was just too different for shooters used to the more traditional positioning.

The S&W and Walther tied here thanks to their triggers’ short take-ups and crisp let-offs. The Sig’s trigger had such a short take-up it felt more like a single action, which two of us felt was too light for a pistol intended for police service, especially since there is no other external safety. The FN’s trigger was more than acceptable but a bit gritty. The HK’s DA/SA trigger came in for the usual complaints as the DA pull was quite heavy and the SA pull had a long take-up. And this particular Glock’s trigger was extremely gritty, which forced shooters to nurse it when shooting the plate racks and trying to avoid (unsuccessfully in a number of cases) hitting the no-shoot targets in the Nine + Nine Drill.

Once again, the Glock, S&W and Walther tied in this category, with the FN and HK trailing by a mere point each. All of us felt that the texturing on the narrow Sig grip wasn’t aggressive enough, which allowed it to move around in our hands under recoil.

The Glock and Walther owned this category thanks to their bright and fast-to-acquire AmeriGlo and TruGlo front sights. The FN’s sights were high and large for fast acquisitions and transitions between targets. None of us are fans of white-three-dot sights, so the HK and S&W both lost points. Two shooters felt the Sig’s sights were too low.

While the Walther was the only pistol with a perfect score in the accuracy category, all of them provided sufficient precision for their intended purposes. The HK only came in last because its long trigger stroke caused some rounds to wander away from the intended point of impact.

Here the S&W and Walther tied again due to their easy-to-access magazine releases. The others finished in the order they did because their releases were either difficult to access, difficult to operate, or their magazines occasionally failed to drop free.

Before we left the range, I put my friends on the spot by asking which of our half-dozen test pistols would be their choice if they were law enforcement professionals. Dick said that while it was a difficult choice between the S&W and Walther, the latter won out thanks to its superior sights. Richard seconded that because of the Walther’s sights and the fact that the grip fit his small hands much better.

As for me, I have to admit that it was awfully close to being unanimous, but in the end, I went with the S&W. While the Walther had superior sights to me, I felt the S&W’s ergonomics and trigger were the best of the lot. Consequently, my vote went to the pistol from Springfield, Massachusetts.

Note: If you’re on a mobile device, you may need to scroll to the right to see the complete results in the table below.

This article is from the March/April 2020 issue of Combat Handguns magazine. Grab your copy at OutdoorGroupStore.com. For digital editions, visit Amazon.

Here are a couple of common questions we see people asking on the Internet regarding what the best 9mm pistol is, especially as it relates to concealed carry.

What is the most accurate 9mm pistol?

There are plenty of accurate 9mm pistol options out there. Any of the manufacturers we tested here is a good start. But remember, every shooter is different — go with an option that works for you.

What is the best 9mm carry handgun?

Again, there are plenty of great 9mm carry handgun option on the market. It’s all subjective, though. What works for one person might not work for someone else. Is there one “best” handgun? Probably if you take every review into account, but again, go with what works best for you. 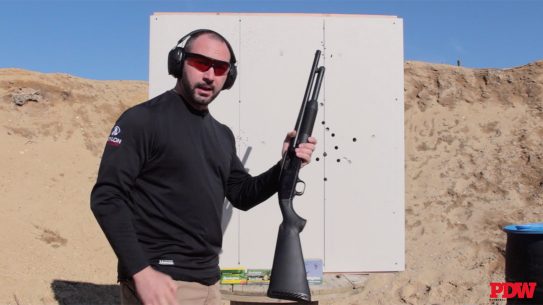 Your home defense shotgun may need to shoot through walls if the situation calls...