1
SHARES
0
VIEWS
Share on FacebookShare on Twitter
In recent interviews with gun retailers discussing expanded sales, we learned that many of the purchasers during this COVID-19 outbreak have been first-time gun buyers. Panic buying continues to fuel demand. Many are making these purchases to be able to better protect themselves and their families if the country’s social situation gets even more dire. So if you happen to be a recent first time purchaser, follow this guide of nine tips for new gun owners. 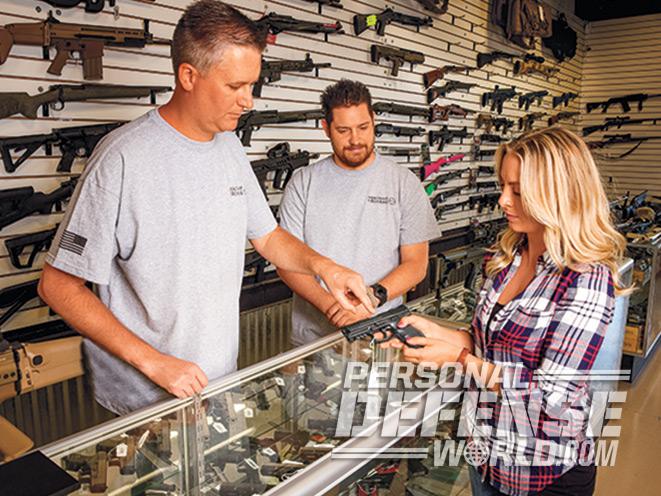 Finding The Right Handgun: A Checklist For First-Time Gun Buyers

While we welcome new gun owners to our ranks, we also want to offer you some good, sound advice on using your new gun. So, we talked to Dianna Muller—former Tulsa police officer, competition shooter and founder of the D.C. Project—to get her best recommendations.

“Owning a firearm is a huge responsibility,” Muller said. “First, new gun owners need to be aware of the four firearms safety fundamentals that we all should know.”

Treat Every Gun as If It’s Loaded

“Before you even pick up a gun, if you treat it like it’s loaded, nothing bad is going to ever happen,” Muller said. On the flip side of that, of course, are the accidents that sometimes occur because unsafe people wrongly assume they’re handling an unloaded gun and pull the trigger.

Always Point Your Gun in a Safe Direction

“As long as you always keep it pointed in a safe direction, nothing bad is going to happen,” Muller said. Again, you can probably imagine what happens if you don’t observe this rule and pull the trigger while pointing your gun at objects you don’t want to destroy.

Keep Your Finger Off the Trigger Until You Plan to Shoot

“If you keep your finger off the trigger, until you have a target and you know you are going to fire, nothing bad is going to happen,” Muller said. Conversely, if you have your finger on the trigger while not meeting that criteria, something bad could very well happen.

Know Your Target and What Is Beyond

“That means, if you’re shooting at a bad guy, but little Jimmy’s standing behind the bad guy, and you miss the bad guy, you’re responsible for hurting anybody with that round,” Muller said. “Every round that comes out of your gun is your responsibility.”

In addition to the basic safety rules, here are some other suggestions for success.

“New gun owners have a responsibility to know about the self-defense laws,” Muller said. Those who don’t can get themselves in trouble very quickly. Don’t assume you know when it is OK to shoot someone you perceive to be a threat. Resources that can help you learn more include the U.S. Concealed Carry Association (USCCA), U.S. Law Shield and the National Rifle Association (NRA).

Having a gun ready for an armed self-defense situation is critical. But it’s no more important than keeping it away from unauthorized users. “Teach your kids and everybody in your home about firearms safety,” Muller said. “A healthy education program paired with a storage plan is the safest strategy.”

Know How Your Gun Works

“Knowing how your gun functions can reduce the chance of accidents for new gun owners,” Muller said. “There are plenty of good videos on YouTube about the function of different kinds of firearms.” One example: On a semi-auto pistol, if you don’t drop the magazine out first, then unload the chamber, it is still loaded—even if you think it is not. That’s a potentially deadly situation.

Use The Correct Ammo

If you have a 9mm pistol, you need 9mm ammo. Other calibers won’t work. “Also, not all ammunition is built the same,” Muller said, “and new gun owners should understand that full-metal jackets perform differently than defensive rounds.” Muller’s ammo sponsor, Fiocchi USA, has a great tool to learn what bullets are used for what purposes. Just hover your cursor over the “Products” header on the home page.

Engage In the 2A Battle

When Americans become gun owners, they immediately have a political target painted on their backs by politicians and anti-gun organizations who wish to curtail the Second Amendment rights of law-abiding citizens. “New gun owners quickly find out that they’ve been lied to,” she said. “They’ve been told it’s easier to buy a gun than it is to buy a book. Now, they need to join a gun rights group and get involved. The Second Amendment is a non-partisan issue. It’s a constitutional issue, and it’s for everyone.”