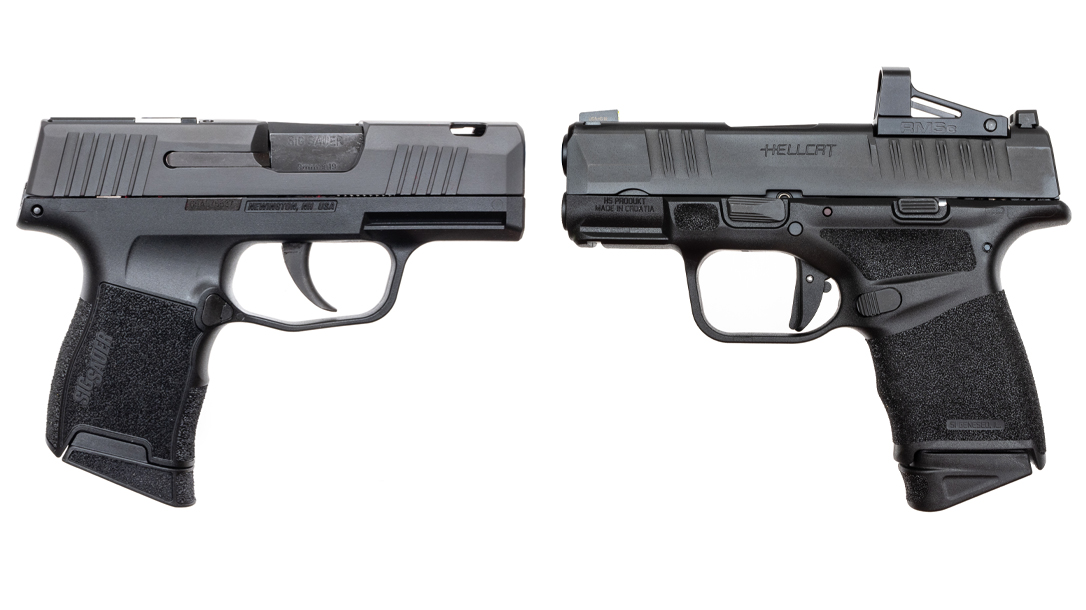 When it comes to everyday carry, we often have to balance a few different aspects of our pistols: Size, capacity, convenience and concealability. The parameters for this complicated ballet of decision making are often defined by location, environment, attire and the carrier’s level of commitment. Generally speaking, the smaller and more concealable a pistol is, the fewer number of rounds it can hold. 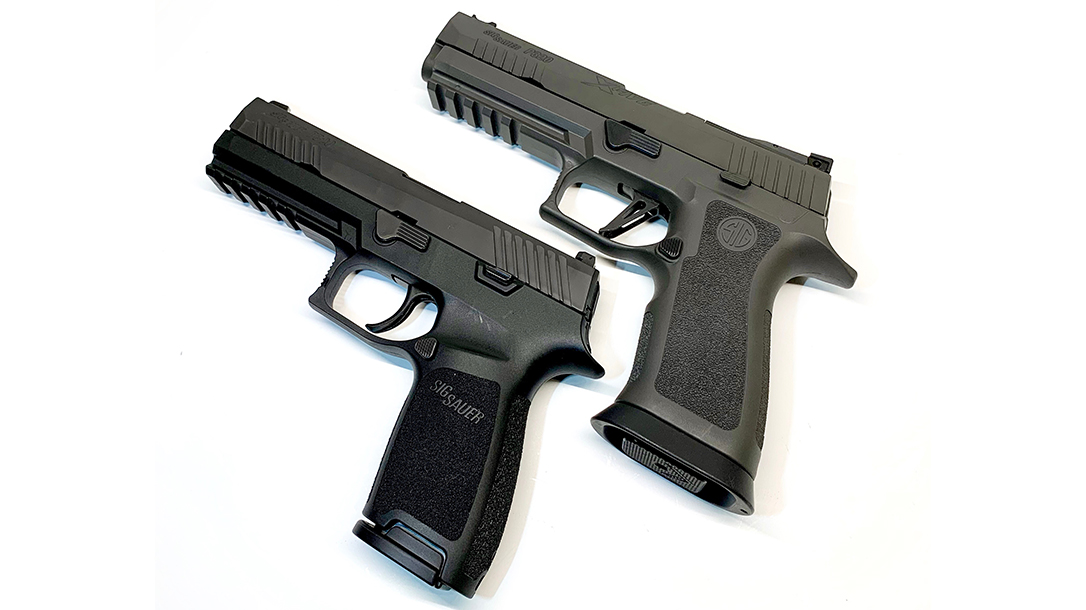 Fortunately for us, recent introductions to the market have set new benchmarks in the capacity-versus-size game. “Micro-compact” pistols like the SIG Sauer P365 SAS and Springfield Armory Hellcat OSP are setting the stage for a new era in concealed-carry handguns. So we took them to the range and gave them real run against each other.

Sig Sauer shocked the market when it introduced the diminutive P365 and its physics-defying 10-round magazine. With a footprint smaller than the six-round Glock 43 but giving nothing up in features, the P365 quickly became the hottest show in town.

On the heels of that success, Sig has introduced two more variants, including the new P365 SAS that I received for this review. Essentially identical in dimensions and function to the original, the latest variant features the company’s Sig Anti-Snag (SAS) treatment, which includes removing anything from the gun that might catch on clothing and hamper your draw.

Sig Sauer has offered SAS treatments on countless pistols in its catalog, but none so radical as the P365 SAS. There are some slight differences in the slide’s beveling, and both the magazine release and slide catch have been utterly minimized so as not to protrude and catch on the draw—though I’m not sure this was ever really an issue. The most drastic step, however, was the removal of the standard sights.

Instead of the usual front post and rear sight arrangement, the company milled out the slide and mounted a flush-fitting FT Bullseye fiber-tritium sight. This apparatus features a green circle centered within a green ring to line up the shot. Rather than focus on the front sight, the shooter focuses on the rear of the slide where the high-visibility green circle and dot can be seen. It’s quite unusual and takes a little getting used to, but more on that later.

The P365 SAS also has a ported barrel and slide to assist with recoil management, as Sig Sauer reports up to a 30-percent reduction in muzzle flip. Aside from those changes, everything else remains the same, including the Nitron-finished stainless steel slide, polymer frame, front and rear slide serrations, reversible mag release and striker-fired operating system.

The P365 SAS ships with one flush-fitting, 10-round magazine and another with an extended finger ledge. The gun will also accept the company’s 12- and 15-round magazines. These are especially handy since mags are fairly easy to conceal on their own, and you can always use the larger mags for home defense.

Not to be outdone, the folks at Springfield Armory recently threw their hat into the high-capacity, micro-compact ring with the new 9mm Hellcat. Taking the leader position in the capacity fight, the Hellcat comes with an 11-round magazine with an extended baseplate, providing just a bit more real estate for your pinky finger, and a 13-round magazine with a longer, squared-off baseplate. That baseplate is a tad more difficult to conceal and doesn’t offer any additional room for the pinky, but it opens up enough area for two more rounds to be loaded in the magazine.

Very similar in size to the P365 SAS, the striker-fired Hellcat is just a hair longer at 6 inches versus 5.8 inches, and it has an identical weight of 17.8 ounces with the standard magazine. But in contrast to the P365, the Hellcat features a low-profile, reversible magazine release and a more familiar sight arrangement. The tritium front sight is paired with a U-notch rear sight for an outstanding sight picture.

I tested the OSP variant of the Hellcat, which has a slide milled to accept a miniature reflex sight like the Shield RMSc. Sig offers an optics-ready package with its P365 XL, but the user loses the rear sight when the optic is installed. The Hellcat keeps the rear sight in place for co-witnessing through the optic.

Overall, the Hellcat is a well-appointed pistol with front and rear cocking serrations, an accessory rail and a flat-faced trigger, which is all the rage these days. The grip frame incorporates what Springfield has dubbed its Adaptive Grip Texturing, which is fairly subtle but effective. While it feels similar to the P365’s texturing, the Hellcat also includes the same texturing on the thumb shelves and index pads forward of the triggerguard for a positive purchase on the pistol.

Other appointments include a loaded-chamber indicator and a hammer-forged, 3-inch barrel with a Melonite finish, just like the slide. This provides for excellent wear and corrosion resistance. The Hellcat ships with its own zip-up case and an extra flush-fitting baseplate for the magazines.

Because of their similar size and weight, both pistols feel fairly similar in hand. It’s just the smallest of details that differentiate one from the other. For instance, the Hellcat seems to fill my hand just a bit more while the P365 SAS is a little narrower. Though both have 1-inch-wide slides, using a micrometer, I found the grip width to be 0.9 inches for the Sig and 1.07 inches for the Springfield. That doesn’t sound like much of a difference, but it’s noticeable in the hand.

Whether a thinner or thicker grip is better depends on the user. For shooting, I preferred the slightly thicker grip of the Hellcat. It offered a little more control. However, I have owned a standard P365 since the model first hit the scene, and the thinner grip lends itself to pocket carry. For that reason, I have not been without my P365 a single day. It rides easily in my pocket whether it’s my primary or backup.

The Hellcat also has a slight edge in how the frame is molded, as it provides a much higher grip than the P365 SAS, which translates to greater control. Even so, the porting on the P365 SAS mitigates muzzle flip to a degree, and I wasn’t able to discern any appreciable difference between the two pistols while shooting.

Where the user experience starts to diverge between the pistols is with the obvious SAS “features” on the P365. The lack of a usable slide release requires the user to manually cycle or “slingshot” the slide after a magazine change. This might require some retraining for those users who normally engage the slide release after inserting a fresh magazine.

The sights offer the starkest contrast between the two pistols. The P365 SAS is all about being low profile with the flush-mount FT Bullseye sight, while the Hellcat OSP sacrifices a bit of concealment ease with dual sighting options—the iron sights and miniature reflex sight. Of course, the standard Hellcat is available for $30 less.

To be honest, for close-quarters encounters and with a little training, shooters can get by with fast point shooting. But for quick sight alignment, it was difficult to get used to focusing on the rear of the P365’s slide to center the green dot in the ring instead of just quickly lining up iron sights. Even with slower aimed fire, my groups with the P365 at 7 and 10 yards were nowhere near as tight as with the Hellcat.

Mechanically speaking, both pistols were dead-nuts reliable at the range with standard range ammunition and various brands of hollow points. That’s to be expected from pistols of this quality. The P365 SAS’ trigger had a slightly shorter reset than the Hellcat’s, though both were very good in this regard. The Sig also had a lighter trigger pull at around 3.75 pounds versus 4.25 pounds on the Hellcat. Both had a smooth and slight take-up before the “wall,” though I believe the Hellcat’s break felt crisper and had a little more oomph behind it.

While it might seem like I’ve beat up on the Sig a bit, that’s only with this SAS variant. I’m still a huge fan of my standard P365, and when I compare the original P365 against the Hellcat, the feature and performance gap narrows drastically. Someone else might value the anti-snag qualities of the P365 SAS much more than I do.

The fact remains that the Hellcat, with its 11-round magazine, is now the king of capacity when it comes to micro-compacts, and a strong argument can be made for the extra texturing and more pronounced relief cuts on its grip frame. But the P365 SAS has the advantage of a slimmer grip and a slightly smaller footprint for deep concealment.

It’s up to you to decide which qualities you prioritize over others. Both the Hellcat and the P365 SAS are among the very best high-capacity micro-compacts the market has to offer. As long you know what’s best for your carry routine and choose accordingly, you’ll have a superb fighting pistol either way.

This article is from the May/June 2020 issue of Combat Handguns. Grab your copy at OutdoorGroupStore.com. 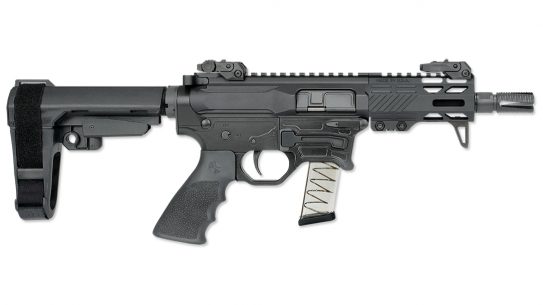 At just over 23 inches long, and running Glock-style magazines, the Rock River RUK-9BT...