Have you ever met anyone who didn’t like Italian food? I bet the answer’s no. What about fast cars? Would you pass up the chance to drive a Ferrari, Lamborghini or Maserati? And don’t even get me started on Italian women. Sophia Loren is still turning heads in her mid-80s.

The IFG Defiant Stock I

This brings us to guns. Italy is the home to several famous firearms manufacturers, including Beretta, Chiappa, Uberti, Pedersoli and Ceasar Guerini, to name just a few. One such company that has made a name for itself in the competition circuit is Fratelli Tanfoglio, an Italian firm that has been making high-quality pistols since 1969.

Tanfoglio’s CZ-75-inspired pistols have been available stateside for some time, but now they’re coming into the country through the Italian Firearms Group (IFG), a partnership that helps guns from Pedersoli, Sabatti, Fabbrica Armi Isidoro Rizzini (FAIR) and Tanfoglio get into the hands of more American shooters. We are a nitpicky bunch, but that’s really just a way of saying we appreciate quality and craftsmanship. Which brings us to the subject of this review—the 9mm Defiant Stock I.

In a sea of polymer-framed, striker-fired pistols, it’s nice to get ahold of a full-sized, all-steel, double-action/single-action (DA/SA) handgun like the Defiant Stock I. And full-sized is quite an appropriate description. With its 4.5-inch barrel and steel slide and frame, the gun weighs more than 2.5 pounds before you add ammo. This isn’t exactly a gun you’ll tuck into an appendix holster. (Please don’t.)

But the weight is important. While hunters, professionals and couch commandos are always looking for lighter, sleeker designs—“Low pro, man!”—competitors typically want guns with a little extra heft. Because more weight means less muzzle rise and felt recoil, which translates to faster follow-up shots. And the Defiant Stock I was specifically designed to help shooters get into the competitive world. It’s legal for IPSC Production class as well as IDPA Stock Service Pistol (SSP) and Enhanced Service Pistol (ESP) divisions. 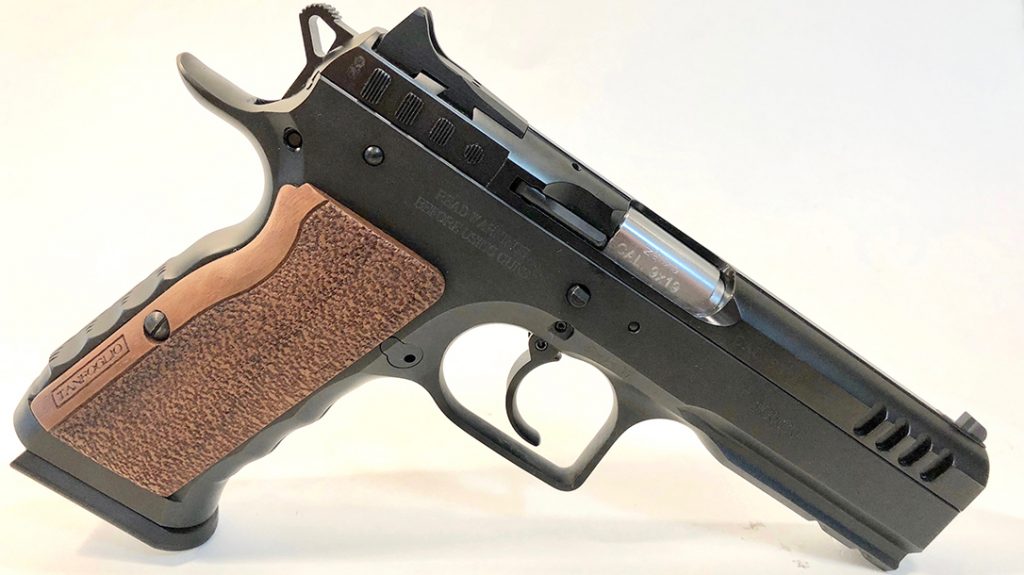 Like the CZ 75, the slide rides on rails within the frame for a slight boost in the accuracy department. You’ll also notice eight dished-out serrations/lightening cuts up front—four on each side of the slide—as well as fixed, all-black sights that are easy to line up. Instead of typical rear slide serrations, the Defiant Stock I features four serrated bumps that grow in size as you get to the back of the gun. With these bumps, I found that it was easier to slingshot the slide with my thumb and forefinger rather than use my usual overhanded method. The slide release is also sturdy enough for sending the slide forward. This isn’t the tiny slide stop you’ll find on a Glock or Sig. Finally, the stainless steel barrel contrasts beautifully with the matte black slide and frame.

The frame is very ergonomic. While the grip might be a bit too girthy for those with smaller hands, it fit my medium-sized mitts quite well. The undercut triggerguard and high-swept backstrap help promote a high hold on the gun, and the wooden grip panels are textured beautifully for a solid hold. The frontstrap has subtle finger grooves that didn’t get in the way, and the backstrap has some slight indentations that prevent the grip from sliding in your palm. Also, regarding that undercut triggerguard: This thing is roomy enough for gloved used and then some. I’m pretty sure a gorilla could pull this trigger.

Now for the DA/SA fire control group. I hear a lot of shooters whine about older guns with these firing mechanisms, usually in regards to the transition from the DA first shot to subsequent SA shots. Here’s the thing: I like options. First off, the Defiant Stock I essentially defaults to SA mode. Chambering a round cocks the hammer, and the left-side thumb safety is just that—it’s not a decocker. So, with the skeletonized hammer fully cocked, you can activate the safety for “cocked and locked” carry just like a 1911. For DA mode, you’ll need to slowly, carefully lower the hammer on a live round—something you should practice with dummy rounds, and as always, the gun should be pointed in a safe direction. (Also, it’s worth mentioning that with the hammer cocked and the safety on, you can still retract the slide to see if a round is chambered.)

The trigger itself is heavy but predictable in DA mode. I got used to it pretty quickly. With the hammer cocked for SA shooting, the deeply curved trigger is light and crisp with a short reset—exactly what a competitor would want.

Finally, IFG ships the Defiant Stock I in a foam-lined hard case with a handy cleaning tool and two 17-round magazines that easily slide into the pistol’s beveled magazine well. Just add ammo. 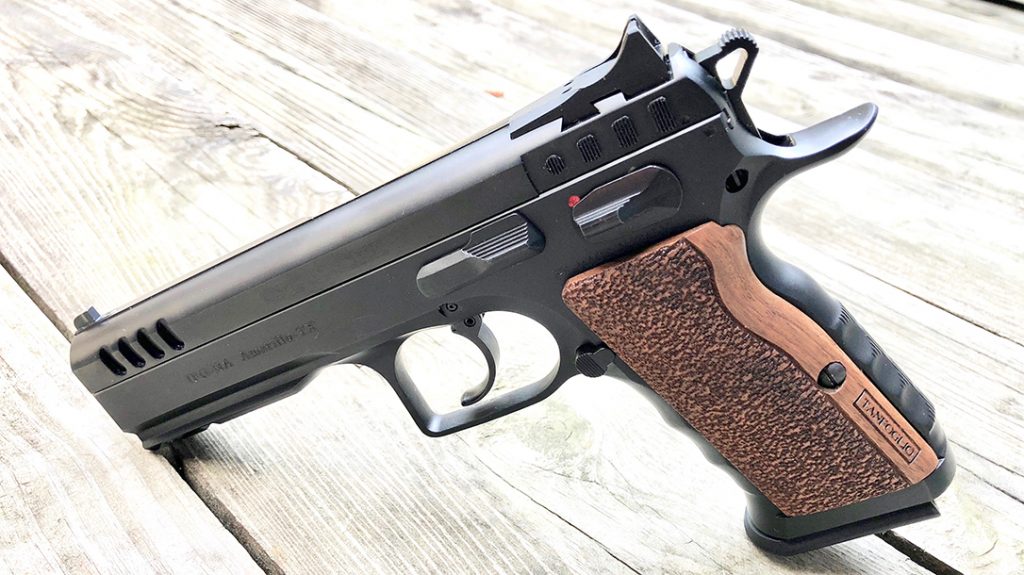 I tested the Defiant Stock I at my usual QuickShot range here in Atlanta alongside a few other pistols, including a polymer-framed subcompact, and boy, let me tell you, the difference was night and day. While I won’t discount the subcompact’s fighting capabilities in the slightest, if I’m forced to shoot 300 rounds through either gun, I’ll choose the full-sized, all-steel pistol every time. The Defiant Stock I was just plain comfortable in my hands, the trigger was crisp in SA mode, and the recoil was negligible.

Seriously. Every time I pulled the trigger, the gun barely moved. It felt like I was firing a .22 LR pistol. All of the Defiant Stock I’s weight really added up in the best way possible, and it immediately became obvious that this gun was born to compete.

I tested the Defiant Stock I’s accuracy with four different loads from Federal Premium and Sig Sauer. The gun seemed to prefer loads lighter than 147 grains, producing the tightest five-shot cluster of the day—just 1.5 inches wide before I ruined everything with a flyer—at 20 yards with Federal’s 135-grain Hydra-Shok Deep JHPs, which also fed reliably despite their deeply scalloped profiles. These rounds are designed to provide a 70-percent improvement in penetration over previous Hydra-Shoks, and this is probably what I’d keep in the gun for home defense. The second-best group came from Federal’s 124-grain Syntech FMJs at just 2 inches, and this is off-hand, mind you. I wanted to run the gun like a competitor. Because the gun didn’t buck or roar, it was easy to just keep firing.

And that’s exactly what I did until somewhere near the 300 mark. At that point, of the six different loads I ran through the pistol to measure its reliability, two Federal FMJ casings failed to eject over two different magazines. I can only assume the gun was getting a bit dirty due to approaching this round count in such a short amount of time, and I ran the gun straight out of the box—no added lube or anything. Again, I wanted to see what the gun could do, and I’m quite happy with the results. I also enjoyed the all-black sights, and found the front sight was easy to focus on without obscuring the target like some of today’s glow-anywhere offerings.

In the end, the Defiant Stock I isn’t actually that different from an Italian sports car. Think about it. When you sit down in a Lamborghini, your first thought—after your brain calms down—is probably, “Man, I want to race in this bad boy.” Your more honest second thought will probably be, “Man, I wish I had the skills to race in this bad boy.” In similar fashion, whether you’re a currently a competitor or not, the Defiant Stock I will make you want to race. Why not give it a try? For more information, visit italianfirearmsgroup.com.

Bullet weight measured in grains and accuracy in inches for best five-shot groups at 20 yards.

This article is from the May-June 2020 issue of Combat Handguns magazine. Grab your copy at OutdoorGroupStore.com.