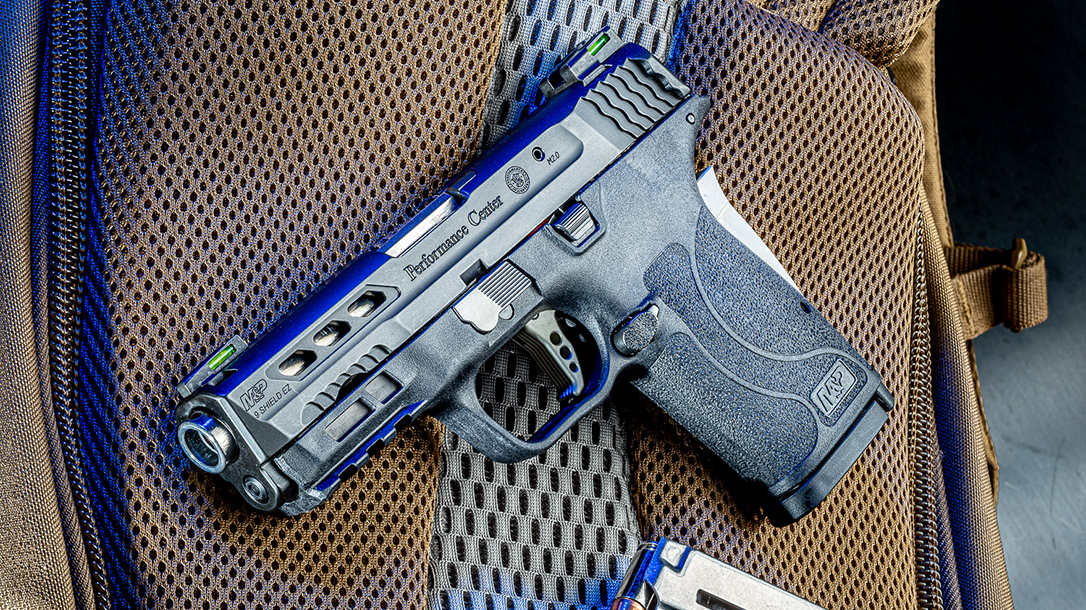 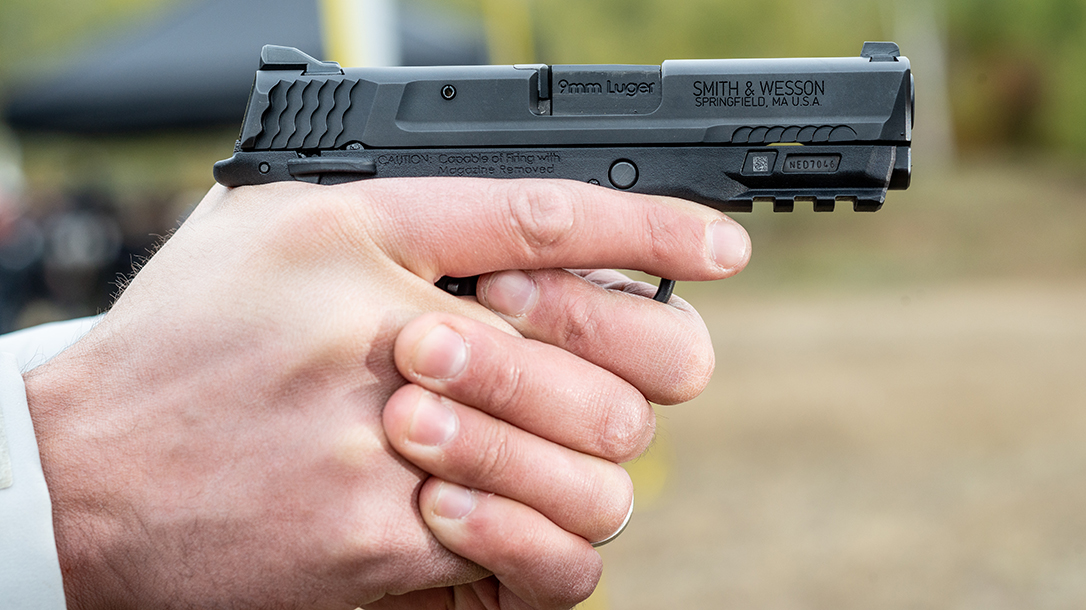 The new pistol is available with gold, black and silver accents, with or without a manual thumb safety. Our test sample did not include this feature. Boasting all of the features that made the EZ line so popular, plus the Performance Center’s refinements, the new pistol is destined to become a favorite with concealed carriers.

With a large segment of our population moving into their golden years, Smith & Wesson recognized the need for a semi-auto handgun whose slide could be easily racked. In 2018 it released the M&P .380 Shield EZ, a pistol designed to solve that very issue. The gun proved to be immediately popular and a 9mm version followed in 2019. Now, in mid-summer 2020 we have the new Performance Center enhanced gun. But before we get started with the new pistol, let’s take a look at how the EZ Shield differs from the original striker-fired Shield.

I’ve used a first-generation S&W Shield for my EDC for about the last three years now and have been very happy with its accuracy and reliability. But the new EZ Shields are very different guns from the striker-fired Shields, though externally they share some degree of similarity.

Probably the biggest difference between the striker-fired Shield and the EZ Shield is that the EZ gun uses an internal hammer. Smith & Wesson’s engineers locate the hammer low in the frame where the reciprocating slide can easily cock it without too much resistance, which could negatively impact the slide’s velocity. This makes the EZ Shield a single-action semi-auto. You’re probably wondering about the safety of carrying a single action pistol cocked but unlocked, and this is where the S&W engineers made the decision to add a grip safety.

The function of the grip safety is to prevent the gun from firing unless the shooter is holding the gun. Once depressed, the grip safety pushes the trigger bar into engagement with the sear. To prevent inertia type discharges, the EZ has a mechanical firing pin block that is pushed out of engagement when the grip safety is depressed. It doesn’t take any effort at all to depress the grip safety and you’ll never notice it when shooting. The EZ Shields also share the original Shield’s comfortable 18-degree grip angle.

You’ll notice from the pictures that the EZ Shield’s slide and barrel are slightly longer. S&W engineers realized that if they worked within the same footprint of the original striker Shield, they wouldn’t have enough spring mass for the gun to cycle correctly. This is why the original gun uses a dual recoil spring system. By lengthening the area under the barrel, Smith & Wesson is able to use a single, flat wire, recoil spring captured on a recoil spring guide. This is how the engineers were able to create a gun which requires about one half of the force needed to rack the slide.

Smith & Wesson machines the EZ slide from stainless steel and uses its proprietary Armornite finish to blacken it. There are stylish fish scale-type cocking serrations at the rear of the slide. At the rear of the serrations the slide widens so that users can get a really good purchase on the slide if they use the slingshot method to charge the chamber. The breech block is pinned into the slide and there is a loaded chamber indicator at the top of the slide. Users can easily feel in the dark if the chamber is loaded. There’s also a small port that will allow sharper-eyed individuals to see a bit of the brass case if loaded. The EZ’s slide weighs about 10 percent more than a striker-fired Shield slide and this, presumably, is to help slow the slide’s velocity so a lighter recoil spring can be used.

What sets the Performance Center Shield EZ apart from standard production models is the time lavished on the gun by Smith & Wesson’s skilled craftsmen. Production gun triggers run about 5.5 pounds whereas Performance Center sample broke with at a very crisp 4.5 pounds and without much overtravel. It also possesses a very firm reset with a tactile and audible click. A crisp trigger and firm reset are instrumental in firing any semi-auto quickly and effectively. Our test sample had a silver anodized, flat-faced, aluminum trigger. The grip safety is also silver, and our barrel is polished bright. These parts provide a pleasing contrast to the black Armornite finish on the slide and the black polymer frame.

Eyesight also wanes with time, and it just makes sense for the gun to have a nice set of sights that are easy to see in nearly every light condition. Smith & Wesson uses Hi-Viz LITEWAVE H³ sights on the PC Shield EZ. These sights feature green fiber optic rods that burn brilliantly in daylight. Hi-Viz places Tritium in front of the fiber optic rods so they also glow brightly at night. Litewave H³ technology is an innovative solution that allows the aging concealed carrier to pick up their sights more easily.

My favorite shooting spot was shut down due to wildfires in the area and this forced me to shoot at an indoor range in the city. This facility did not have the ability for me to shoot from a bench rest, so I fired all groups offhand with the target set out at 10-yards. I fired several groups with each ammunition and the accuracy chart reflects the best of these groups.

Colt’s National Match 124-grain FMJ ammunition produced the best group, but the other two loads weren’t far behind. The S&W PC M&P9 EZ is far more accurate than I was able to shoot it offhand, but my groups were better than I anticipated. Three of the Performance Center features accounted for this. First, the Hi-Viz sights were easy to see even in the dim indoor range. Secondly, the trigger broke very crisply at 4.5 pounds. It’s a great trigger, predictable and consistent with a firm reset. Finally, the PC M&P9 EZ has a ported barrel that proved effective in dampening muzzle rise.

S&W retails the standard production M&P9 EZ for $479, while the suggested retail for the Performance Center gun is just over $100 more. In my book, that extra Benjamin for the upgraded sights, tuned trigger and ported barrel is money well spent! For more information, visit smith-wesson.com/pc. 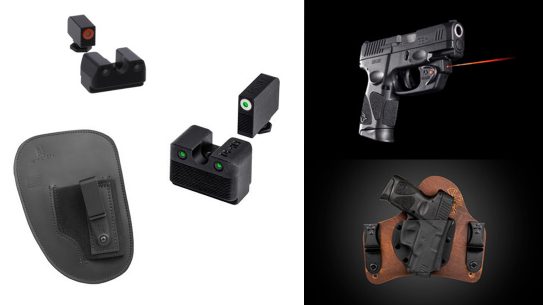