An incident in St. Louis on Sunday where a couple protected their home against a group of aggressive protesters has anti-gunners seeing red. A viral video shows Mark and Patricia McCloskey standing in front of their home, Mark wielding an AR-15 and Patricia a small handgun. While their mechanics could use some work, it paints an interesting picture of the current landscape. 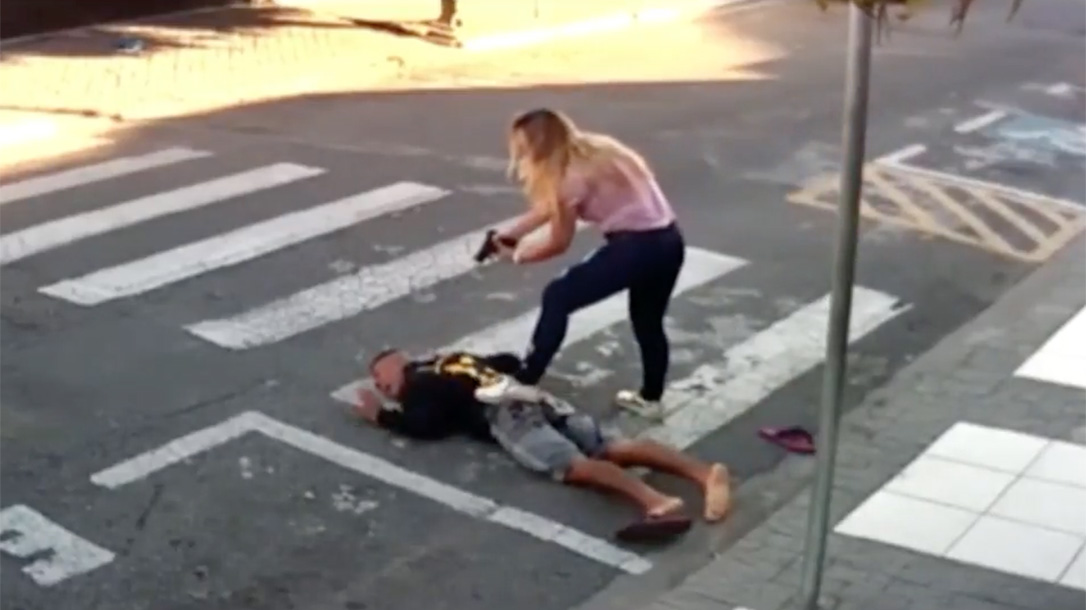 Interestingly, while viewed by thousands of people, the video showed only one side of the story—that from the protesters’ perspective. And that’s not exactly how the St. Louis Police apparently see the incident.

In a criminal complaint, the police refer to the couple as “victim 1” and “victim 2.” According to police reports after the incident, “The group began yelling obscenities and threats of harm to both victims. When the victims observed multiple subjects who were armed, they then armed themselves and contacted police.”

Mark told the various media outlets that the area behind the gate, which the protesters broke down, is private property. The gate even had a sign on it saying, “Private Property, No Trespassing.”

“There’s nothing public in Portland Place. Being inside that gate is like being in my living room,” Mark said in an interview Monday. “One person pulled out a loaded pistol magazine and he clicked them together and he said, ‘You’re next.’ We were threatened with our lives, threatened with the house being burned down, my office building being burned down, even our dog’s life being threatened. It was about as bad as you can get.”

“I went inside I got a rifle … because as soon as I said ‘this is private property,’ those words enraged the crowd,” McCloskey further said. “An absolute horde came through the smashed-down gates, coming right at the house. And then I stood out there, the only thing we said is, ‘This is private property, go back, private property, leave now.’ At that point everybody got enraged, there were people wearing body armor.”

Contrast that report to the headlines that cropped up in leftwing newspapers around the country. The Washington Post crowed, “St. Louis couple points guns at peaceful protesters calling for mayor’s resignation.” The Associated Press made it sound a little less evil, headlining its story, “Couple draw guns on crowd heading to St. Louis mayor’s home.”

Alas, the police, who apparently aren’t making their decision with the same anti-gun bias many in the media seem to be, see things differently. In the latest reports from St. Louis Today, police are now “labeling it as a case of trespassing and fourth-degree assault by intimidation.”

Interestingly, there’s another facet to this story that has been much discussed in shooting circles. As many have noted, the McCloskey’s gun-handling skills definitely need a lot of work. In the viral video, Mark’s AR sweeps his wife more than once. Meanwhile, Patricia is seen with the gun pointed in the general direction of the protesters with her finger on the trigger.

We as gun owners and the shooting community are sometime prone to eat our own, and that seems to be the case for many in this instance. Instead of heaping constant criticism on the couple’s gun-handling skills, however, a more appropriate response would be to admire the McCloskey’s for the successful armed defense of their home and family.

Do they need more training to be completely proficient with their firearms? Absolutely, and I hope they pursue that in the near future. But, don’t all of us need continued training to stay at the peak level of proficiency with our guns and gear?

There are far too many Americans who are against private gun ownership and armed self-defense. While pointing out safety problems isn’t a bad thing, we don’t need to beleaguer the issue and give anti-gun advocates more ammunition in their battle to disarm the law-abiding.

Only two years after surviving bankruptcy, Remington finds itself in trouble again as a...