It’s fair to say that 1911 aficionados have very particular tastes. We have our favorite brands and specific preferences when it comes to beavertails, sights, triggers and the like. Some like modern styles, but others stick to more retro pistols. While there are a number of companies that make outstanding guns, most of us will admit that, given the choice, we would prefer to see “Colt Harford, Conn. U.S.A.” on the frame. A Colt is the only true direct descendent of John Moses Browning and his iconic pistol. 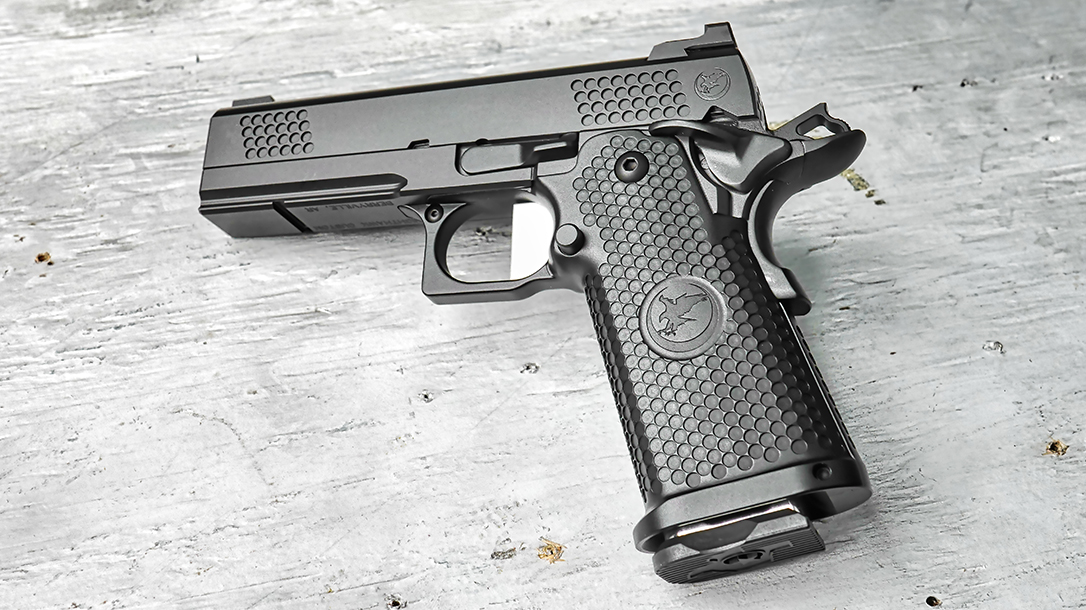 Colt’s journey in past years has been one of trials, tribulations and some triumphs. Focusing on the positive, in 2017, Ken Hackathorn told me that current-production Colt 1911s are some of the best pistols the company has made in years. That is pretty high praise. Other custom gunsmiths have told me the same thing. That doesn’t mean the pistols are perfect, however. They still have sharp edges as well as plastic triggers and mainspring housings. But they’re solid guns.

More recently, Colt introduced the 1911 Classic model. It’s a remake of the Commercial Government Model and features the old-style roll markings on the slide. The 1911 Classic also comes with a National Match barrel, a Series 70 firing system and checkered, double-diamond grip panels made from rosewood. The 1911 Classic stays true to the original Commercial model and is a very unassuming pistol. It’s the perfect canvas for a custom build.

That’s what the great folks at Nighthawk Custom thought, too! Of course, this sort of project isn’t new to Nighthawk. Many will remember that in 2015, Nighthawk partnered with Browning to offer fully customized Hi-Powers from pistols fresh off the assembly line. The project was very successful until Browning stopped producing those iconic 9mms. However, Nighthawk’s customized versions can still be found on the secondary market for premium prices. And Nighthawk has now performed the same feat using the new Colt 1911 Classic as a base.

The concept for the new Colt actually came from Nighthawk’s Custom Shop, after a customer sent in one of his own 1911 Classics in for some upgrades. He wanted an attractive, retro-themed build that was practical, reliable and looked good at the same time. Once the pistol was completed, the Custom Shop gunsmiths knew that this build could have a wider appeal to those who like both Nighthawk and Colt. So, they took the idea to Mark Stone, Nighthawk’s head honcho, who agreed. After a few tweaks, they finalized a semi-custom build that looks awesome and runs like a dream.

Nighthawk takes the stock Colt, breaks it down and gives it a complete overhaul. By my count, Nighthawk replaces 12 major parts. Starting with the frame, the Colt plastic trigger and fire control components are replaced with a short and solid match-grade trigger as well as a machined disconnector, sear, hammer strut and pin. The original hammer is replaced with a retro-style hammer with a bobbed spur. Nighthawk also replaces the standard grip safety with a nicely blended, low-profile beavertail unit.

The original mainspring housing is replaced with a machined housing that features five vertical serrations. The butt of the mainspring housing is also radiused to eliminate that sharp edge. Nighthawk chose to retain the original slide stop, magazine release and tear-drop thumb safety as well as the original Colt rosewood grip panels, which are held in place with flathead screws. The magazine release is tuned and polished for easier operation, and the frontstrap is cut high with vertical serrations—a much welcome modification.

The top end of the Colt receives a complete reliability tune-up. While the National Match barrel remains, Nighthawk installs a match-grade bushing and an appropriate-length link. The breech face is trued and polished, and the feed ramp is throated to the proper dimensions and then polished. The production Nighthawk Colts also come with crowned barrels that fit flush with their bushings, but my test pistol, an early prototype, did not have that feature.

The factory extractor is also tuned and polished, and the recoil and firing pin springs are upgraded. I should also note that in order to keep the price at its predetermined point, Nighthawk does not modify the slide-to-frame tolerances. However, a full-length French border is machined into the slide on both sides, providing a subtle touch of class.

To maintain the theme, Nighthawk chose to replace the factory rear sight with John Harrison’s Retro rear sight. The rear of the blade has 50-lpi serrations to reduce glare. Overall, this sight is both functional and durable. The new front sight features a 14-karat gold bead with a nicely blended base that has been contoured to the radius of the slide.

The entire gun is dehorned, and specific edges are beveled by hand. The final touch is a subdued “Smoked Nitride” finish that is softly distressed. Finally, “Nighthawk Custom” is subtly engraved on the right side of the dust cover to indicate that this isn’t just another 1911.

I’m typically not a fan of the new “battle-worn” finishes offered by many companies. Purchasing a new pistol that already looks like it has been abused just doesn’t appeal to me. That was true until I received the Nighthawk Colt. First, I find the dark gray finish to be rather attractive. The coating actually looks like well-worn bluing, not a nitride finish. Second, the distressing is done tastefully on the edges and appears to be the result of good, honest wear and use. The dehorning also gives the pistol that bar-of-soap feel. The overall pistol is understated and uniquely unassuming.

Getting ready to head to the range, I grabbed three premium personal-defense loads and a couple of boxes of Super Vel 230-grain FMJs. The pistol ships with a single Colt magazine, so that’s what I used for most of the shooting. The rest of the ammunition included Hornady 185-grain Critical Defense, Remington 230-grain Golden Saber Bonded and Gorilla 230-grain Silverback loads. I’ll save you some suspense and say that I didn’t experience a single issue or malfunction with any of the loads, either. All three loads also shot well and produced groups between 1.5 and 2.5 inches at 15 yards.

The National Match barrel and match-grade bushing guarantee that this is an accurate pistol. From the bench, steel plates at 50 yards seemed easy. The fixed rear sight and gold bead front sight produced a very clean sight picture. I appreciated the rear sight’s wide notch, which provided plenty of daylight on either side of the front post. This setup was very conducive for tracking the sights through recoil and making follow-up shots.

I also liked the shorter trigger, which broke cleanly at 4 pounds with no overtravel. The slide-to-frame fit on my pistol, while not as tight as a fully custom Nighthawk’s, was very good. Also, after about 200 rounds, the right grip screws started backing out. It was convenient to be able to tighten the screws with the rim of a .45 ACP case—just the way Browning intended. And when I field-stripped the pistol after three range sessions, I found that the wear was even and consistent, indicating proper tolerances and fitting.

When I evaluate pistols, I tend to list their likes and dislikes or things I would change. With the Nighthawk Colt Series 70, I really liked the sights and low-profile beavertail as well as the spur hammer. The gun was also very easy to carry and handle thanks to its lack of sharp edges—something common to Colts. Finally, I really appreciated the retro styling and subdued finish, which make the gun look like an old warhorse. Interestingly enough, on the range, the Nighthawk Colt Series 70 attracted very little attention. Everyone just assumed it was another worn 1911, and that’s OK with me!

What would I improve on? First, Colt ships the 1911 Classic with only one magazine. Second, the edges of the magazine well were not modified. In a recent conversation with Nighthawk, I suggested including a second magazine and beveling the magazine well. Both are minor issues but would improve the package, especially if this is a customer’s first 1911.

The Nighthawk Colt Series 70 can best be described by the phrase “The whole is greater than the sum of its parts.” The folks at Nighthawk Custom have another winner that will appeal to both Colt and Nighthawk fans. So if you’re in the market for a classic 1911 that is ready to go right out of the box, I highly suggest giving the Nighthawk Series 70 a try.