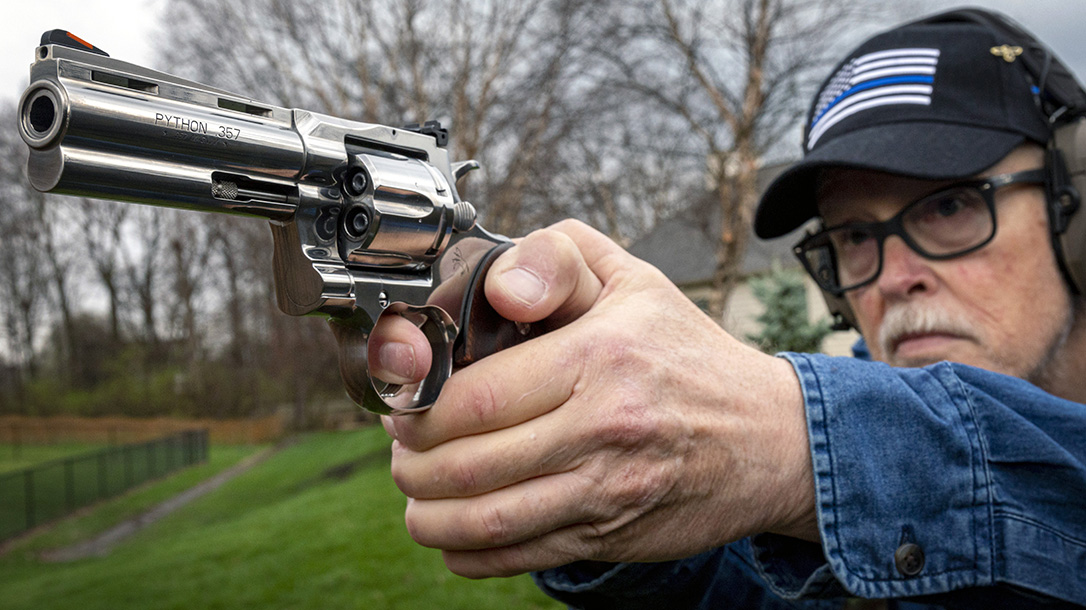 Back in the day, the Officer’s Model, in its various configurations, was the premier target revolver offered by Colt. That all changed in 1955 with the introduction of the Colt Python. This Rolls-Royce of Colt revolvers had as its most distinguishing feature a heavy vent-rib barrel and a full-length ejector rod shroud. A tapering ramp led up to a Baughman-style front sight, and the rear sight was fully adjustable for windage and elevation. 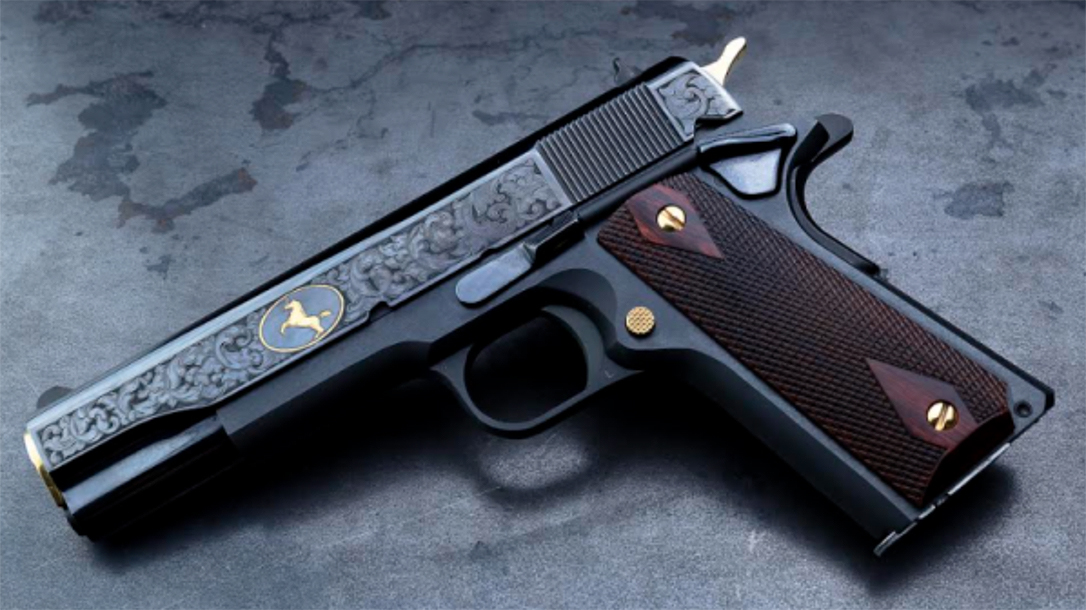 It was built on basically the same E-Frame as the Officer’s Model, but due to its floating, frame-mounted firing pin, the platform was designated the “I-Frame.” Much attention was lavished on the double-action/single-action (DA/SA) mechanism, giving it excellent trigger pulls.

It also had a six-shot cylinder chambered for .357 Magnum cartridges and standard barrel lengths of 2.5, 4 and 6 inches. Blued, nickel and, later, stainless steel versions were available. Checkered walnut target stocks came on the 4- and 6-inch-barreled models, while service stocks came on the 2.5-inch-barreled model. There were a number of variations over the years, but the final Python rolled out of the Colt Custom Shop in 2003.

Thankfully, Colt got back into the revolver business in 2017 with the Cobra, which was an immediate success. Now the company has revived a few more models, and 2020 marked the reintroduction of the Python in .357 Magnum.

Naturally, aficionados are going to immediately compare the new Python to the original model. In my case, the Python nestled in my gun safe is 45 years old. A quick glance at the two wheelguns side by side reveals that they’re pretty close in appearance. But further inspection points out a number of differences. The biggest is the action, which is much simpler on the new gun. There are less moving parts inside the gun now for greater reliability and less required maintenance. Colt tested this with more than 40,000 trigger pulls on a single Python, which were lighter and more consistent due to less internal friction.

Externally, the hammer spur is a bit shorter than the original’s, and it has serrations instead of checkering. The trigger has also been redesigned, but the face still has three deep serrations. On the new Python I tested, the SA pull was crisp and weighed 5.75 pounds while the DA pull was 11.38 pounds without any stacking. In contrast, my old Python had 4.93- and 8.63-pound pulls in SA and DA modes, respectively.

The new frame is nearly identical to the original’s in size and shape, but due to the changes in the trigger mechanism, some of the screws and pins have been repositioned. The gun still has a square-butt grip frame as well, but the backstrap is smooth instead of serrated. On the left side of the frame, the new model has no apparent cylinder stop like the original because the internal redesigns don’t require it. The cylinder release is similar to the original design, and you’ll find the “Rampant Colt” just below it.

Viper Tale of the Tape

My middle-aged Python has an Elliason-style adjustable rear sight, while the new version has the same rear sight used on the new King Cobra Target revolver. Its shape reportedly allows a 30-percent increase in the cross-sectional area of the topstrap, making for a stronger frame. The stainless steel alloy used to build the new Python is also reportedly stronger.

Both Pythons have barrels similar in appearance. The new model has a 4.25-inch barrel to allow importation into Canada. Both have a “step down” at the muzzle—the new model has a recessed crown, while the older model’s is much less pronounced. The front sight on the 2020 Python is held in place with a setscrew, making it interchangeable. The factory-supplied blade is black with a red insert. My old “snake” features a red ramp front sight pinned in place.

The barrel stampings are very close in appearance between the guns, but “Colt” is a bit more stylized on the new model. The front edges of the cylinder are also beveled just like the original’s, but the new model has slightly larger bolt cut leads. Here, the most obvious difference is the shape of the ejector star ratchets, due mainly to the differences in the action.

The two-piece grips on the new Python are made from walnut with very precise checkering on the side panels and silver Colt medallions. As for the shape, the curvature of the frontstrap isn’t as pronounced on the new gun, and the rear of the grip panels are flattened, especially near the butt. The old Python has more traditional walnut grips with checkering that actually protrudes and gold-colored Colt medallions.

Before I hit the range, I scrounged up a few different .357 Magnum loads from CorBon, DoubleTap (including Colt Defense JHPs), HSM and Remington. I also obtained a Galco DAO Strongside/Crossdraw Belt Holster. It looks a lot like the holsters I wore as a law enforcement officer in the 1970s and 1980s. Made from premium steerhide, it rides high on the belt. It also offers adjustable retention, a safety strap and 1.75-inch belt slots. I paired this holster with a Galco 2x2x2 Ammo Carrier to hold six extra cartridges.

Colt also mentioned that the new Python accepts old Python grips, so I obtained some exact replicas from Deer Hollow Enterprises. I tested a third-generation set that match the grips on my 1975-era Python. They look and feel great, with the same type of checkering and gold Colt medallions, and fit the 2020 Python like a glove.

Finally, I hit the range on a sunny, fairly warm day in March. I started by getting some velocity figures using an Oehler Model 35P chronograph, and then it was time to compare the old and new Python side by side. This involved shooting six 5-shot groups at 25 yards in SA mode with each Python using Black Hills’ 148-grain .38 Special hollow-base wadcutters (HBWCs). I placed each gun in a Hyskore rest to take out some of the human factor, and the velocities came in at 724 and 793 fps for the old and new guns, respectively. The average group size for the 1975 Python was 2.52 inches, while the 2020 Python’s was 2.17 inches. The smallest group was 1.95 inches.

Next, I shot three 5-shot groups from the new Python—in SA mode and using a sandbag rest for support—with each of my .357 Magnum test loads at 25 yards. Surprisingly, the best group of the day came with the hardest-hitting load in the bunch: DoubleTap’s 200-grain Hard-Cast solids. The cluster measured 1.98 inches, and the load left the muzzle with 769 foot-pounds of energy (fpe). I had a fantastic four-shot group that measured 0.82 inches with the CorBon JHPs. However, a flyer opened it up to 2.87 inches. Only one group measured over 3 inches wide, with good results.

Shooting for groups isn’t my forté anymore, so I decided to run the new and old Pythons through a 30-round combat qualification course using my Galco leather gear and a mix of ammo. I set up some PJL-USA “bad guy” targets and began each stage with the gun loaded and holstered. I also kept sex extra rounds in the 2x2x2 pouch.

Then I started by firing 12 rounds at 3 yards using a one-handed, point-shoulder stance, six rounds with just my right hand, then six with just my left hand. After reloading, I fired a double-tap and body-armor drill at 7 yards with a two-handed grip. Then, reloading again, I moved back to 15 yards to fire six shots behind a barricade. Both guns performed well, and all of my shots went where I wanted them to go, fully disabling the “bad guys.” Neither one would’ve been able to walk away.

There were no malfunctions, either. I have heard some criticism about the length of the Python’s ejector rod. However, I learned how to positively eject brass from revolvers at the Border Patrol Academy in 1982; using this technique, I didn’t have any problems.

The red ramp front sight on the 2020 Python slopes less than the original’s. I found it easier to see and faster, too. The new grips did just fine, but my hand really liked the Deer Hollow Enterprises reproductions better; they’ll no doubt end up on this sixgun. But in the end, if you can find one of these new Pythons near the MSRP, scoop it up. They’ll definitely sell out quickly. And thank you, Colt, for bringing back this classic wheelgun! For more information, visit colt.com.

This article is from the September/October 2020 issue of Combat Handguns magazine. Grab your copy at OutdoorGroupStore.com. 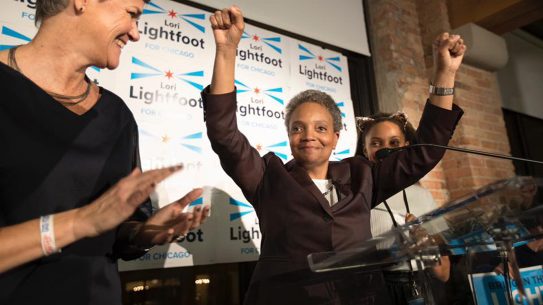 Citing the need for 'common sense gun control' and a federal plan to reform...