Daniel Defense is one company that never disappoints when it comes to firearms. American owned and operated, Daniel Defense has gained a reputation for incredibly crafted higher-end rifles over the past few years, and the company’s recent foray into the AR pistol game continues that legacy. The new DDM4 PDW in 300 Blackout might very well be the best AR pistol on the market for home defense. 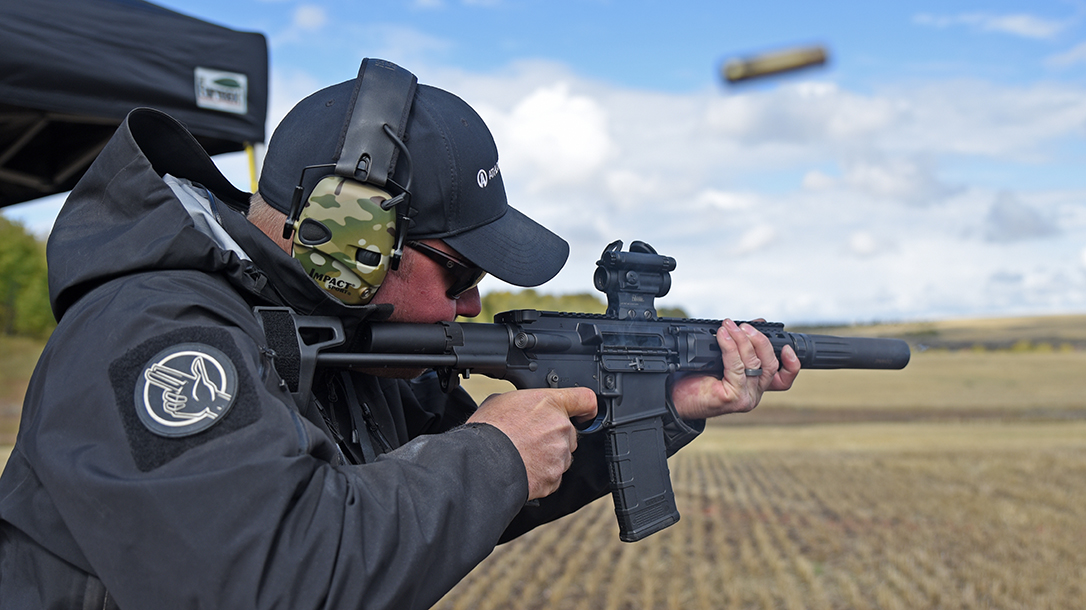 It’s small, lightweight, versatile and, thanks to some clever engineering, doesn’t require any NFA paperwork. It’s considered a large-format pistol—one that just screams “home-defense powerhouse,” so I put it to the test to see if it would hold up to that title.

I first got to shoot the new DDM4 PDW with a Daniel Defense Wave suppressor installed at the 2019 Athlon Outdoors Rendezvous in Driggs, Idaho. And even with the Wave suppressor mounted on the cold-hammer-forged, 7-inch, Strength-to-Weight (S2W) barrel, the DDM4 PDW was still super compact. But for my testing back home, I was sent a standard model with a Linear compensator installed on the 5/8×24-tpi muzzle threading. Made from 17-4PH stainless steel with a salt-bath nitride finish, this highly effective device pushes the muzzle blast forward, away from the shooter. It’s a great addition if you aren’t going to run a suppressor.

Surrounding the barrel and pistol-length gas system is a 6-inch MFR XL handguard with a Picatinny rail on top and M-LOK accessory slots along the sides and bottom. The front of the handguard is also flat to help keep the gun compact, and Daniel Defense includes an SLR Rifleworks hand stop on the bottom to keep your support hand locked in a safe position. If you’re using the AR pistol for home defense, for example, the hand stop will prevent accidents in dark, stressful situations.

The upper and lower receivers are both crafted from 7075-T6 aluminum, and Daniel Defense includes an ambidextrous Grip-N-Rip charging handle as well as an ambidextrous safety selector. The pistol grip has Soft-Touch rubber overmolding for comfort and control, and you’ll find a Maxim Defense CQB arm brace at the rear. This sweet add-on looks great and helped the DDM4 PDW achieve an overall length of just 20.75 inches. It rides on two rails and can be locked into four different length-of-pull positions, including fully collapsed against the receivers. With the brace extended, the pistol is 24.75 inches long.

The first time I pulled the DDM4 PDW’s trigger, it was love at first shot. The gun was also easy to control, which kind of surprised me considering its small form factor and larger 300 Blackout chambering. But it was quite easy to hit multiple steel plates set at various distances as quickly as I could.

The pistol grip is one of my favorite parts of the gun. It’s definitely a step above the stock A2-style grip included on most AR-platform weapons. With that nice rubberized feel to it and texturing almost like a vehicle tire, you can get a truly superior hold on this little blaster.

Shooting off-hand with no support, I was able to get some really tight groups at 20 yards before “walking” the DDM4 PDW out to 50 yards. My five-shot groups were typically less than an inch wide from 7 to 20 yards, and they opened up just a little at 50 yards. At that distance, 2-inch groups were with the norm with all of the test ammo, but again, I was shooting off-hand without any support. I don’t own a .30-caliber suppressor, so all of my testing was with the DDM4 PDW unsuppressed.

The pistol ate pretty much everything I fed it with the exception of two subsonic loads: Hornady’s 208-grain Black A-MAXs and HSM’s 220-grain SMKs. For some reason, those two rounds would not allow the gun to cycle properly. Every round would fire, but the bolt would not grab the next round. At first, I thought maybe the DDM4 PDW didn’t like subsonic ammo without a suppressor installed, but it ran just fine with Federal’s 220-grain American Eagle OTMs as well as a few other subsonic rounds. To make matters more confusing, the pistol ran HSM’s subsonic 208-grain A-MAXs just fine. So your guess is as good as mine on this.

Other than those rounds, the gun ran flawlessly with everything else I fed it. I slapped my EOTech EXPS2 Holographic Weapon Sight (HWS) on the DDM4 PDW and was produced sub-1-inch groups at 25 yards with numerous loads from Black Hills, Federal, HSM and Wilson Combat. I honestly couldn’t tell you which load I shot better because I was able to control them all very well. My favorite was probably Black Hills’ .300 Whisper 125-grain Tipped MatchKing (TMK) ammo, which offered very little recoil and consistently produced 0.5-inch groups at the very realistic home-defense distance of 7 yards. Yes, that’s pretty close, but I wanted to shoot very quickly at realistic distances.

At the range, some guys from a few lanes down came over to see what I was shooting to make so much noise. They described themselves as “very inexperienced with the AR platform” and had never shot anything so small. The instructor part of me came out, and I immediately started showing them how everything worked. Then I made their day when I handed them each a full 30-round magazine and told them to have fun. Their faces lit up as they dumped 30 rounds through an AR pistol for the first time.

One of the guys actually aimed and was able to shoot a 4-inch group at 7 yards. That’s not terrible for an AR virgin. The other guy just dumped the mag as quickly as he could pull the trigger. I can’t really blame him. After things calmed down a bit, I asked them what they thought. Their response describes the Daniel Defense DDM4 PDW perfectly: “That thing is frickin’ awesome!”

There are a lot of reasons to own the DDM4 PDW. Most people are familiar with operating AR-15s. This gun is perfect for maneuvering in tight quarters, like inside a home or vehicle. It’s also user-friendly and light on recoil, no matter the setting. Sure, the pistol is a bit on the pricey side for this category. But, man is it fun to run! And it looks like a piece of art. It’s a head-turner on the range and will definitely do the job in making a bad guy realize he made a big mistake if he breaks into your home. For more information, visit danieldefense.com.

This article is from the September-October 2020 issue of Combat Handguns magazine. Grab your copy at OutdoorGroupStore.com.