by Fred Mastison
in Gear, Optics/Lights
0

There are few companies that enjoy the name recognition that has been earned by Trijicon. It has been the king of the hill in the fighting optics market forever and is showing no signs of relinquishing its title. Trijicon’s people also know that in order to keep that title, they must continue to innovate and make world class products. It is with this maxim in mind that Trijicon has designed, tested and now released its newest offering: the Trijicon RMRcc. 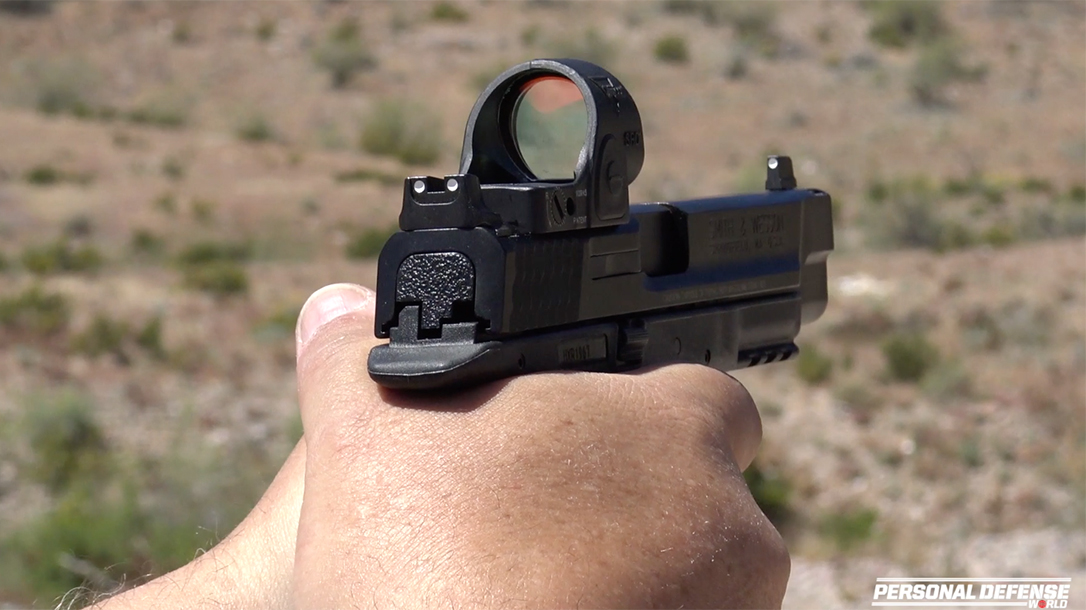 The RMRcc is a smaller and lower profile version of the bombproof RMR. Designed to be thinner than the RMR, it’s ideal for mounting on popular single-stack and subcompact pistols. The RMRcc is well suited to mount to 1911-style pistols as well. It’s also durable enough to stand up to the harsh recoil generated by the .45 ACP and 10 mm.

Even with a smaller size, it retains all of the solid features of the regular RMR. Those features include easy-to-use buttons, a common 2032 battery with up to four years of illumination, and a wide variety of mounts to fit most concealed carry pistols. The RMRcc is available in either a 3.25 or 6.5 MOA dot size. It also provides a bright, illuminated aiming point under any condition. Best of all, the RMRcc is parallax-free, meaning simple “point and shoot” operation with superior accuracy.

Brightness control has always been a point of discussion with shooters and Trijicon knows it. The RMRcc features an automatic brightness mode and eight manual positions for custom settings. A “Button Lock-In” mode prevents accidental adjustments to your preferred brightness setting. Meanwhile, a “Battery Conservation” mode adjusts the aiming dot to ambient lighting conditions after 16.5 hours without a button push to further extend battery life. Windage and elevation adjustments allow for quick and easy zeroing with no need for any special tools or devices.

I had the privilege of getting some time on this new optic at a recent Trijicon event in Texas. Overall, the performance was very pleasing. The optic fits the ever growing world of slender guns designed for concealed carry, as well as my beloved 1911s. It fits guns that the traditional RMR did not fit quite right.

The event for me was more than just an opportunity to test a new optic. It was also a chance for me to dig into the weeds about why we needed this new optic and, in turn, why we needed an optic on a handgun at all. I’ve shot countless guns with glass on them before. However, this event helped me understand just how helpful they really are.

The first reason is the most obvious, and that is speed. Once you know how to present your firearm into the fight using the RMRcc, you are able to much more quickly engage your target. Something I had not considered, however, is that shooting with both eyes open allows you a better field of view and ultimately allows you a better opportunity to know when NOT to shoot.

A shooting challenges situational awareness, and being able to see more of our downrange area can make the difference between success and tragedy. There have been countless cases of innocent bystanders getting hit simply because the person shooting was hard focused in the front sight and unaware of a person entering the firing zone. In short, it gives us a better decision-making tool

Another concern I had was durability. We put that to rest when we racked our pistols on the posts we shot around. In fact, the reps from Trijicon asked us to set up malfunctions and clear them by racking the gun hard on the posts. I took this to heart and thought, “It’s not mine,” before going to town on the post. I had multiple deep gouges in the post from manipulations and each time I would raise the gun back up, the optic was still running and holding zero. This was capped off when we were encouraged to unload and actually bang the optic on the post.

Trijicon designed the RMR to meet military specs and the RMRcc has the same DNA. I gave the post several firm strikes with the RMRcc and once again, it stayed functional and held zero. The moral of the story is that the optic is hearty and will survive just about anything you throw at it. This is a major point for Trijicon and always has been.

“Trijicon is proud to offer pistol owners an optic designed around their needs and built to Trijicon’s standards for durability,” said Chuck Wahr, Global Vice President of Sales and Marketing at Trijicon. “Users can have confidence in carrying a pistol equipped with the RMRcc.”

The concealed carry market is huge and presents its own set of challenges. These small and sometimes micro guns have short sight radii and can be difficult to fire accurately consistently. Putting a Trijicon RMRcc on one of these guns takes away a major stressor. It allows the shooter to more quickly and effectively get on target.

The small size of the optic means we add very little to the overall footprint of our gun; this makes it easy to conceal and carry. The Trijicon RMRcc is a solid optic and something to consider if you are looking to upgrade your blaster. For more information, visit Trijicon.com.