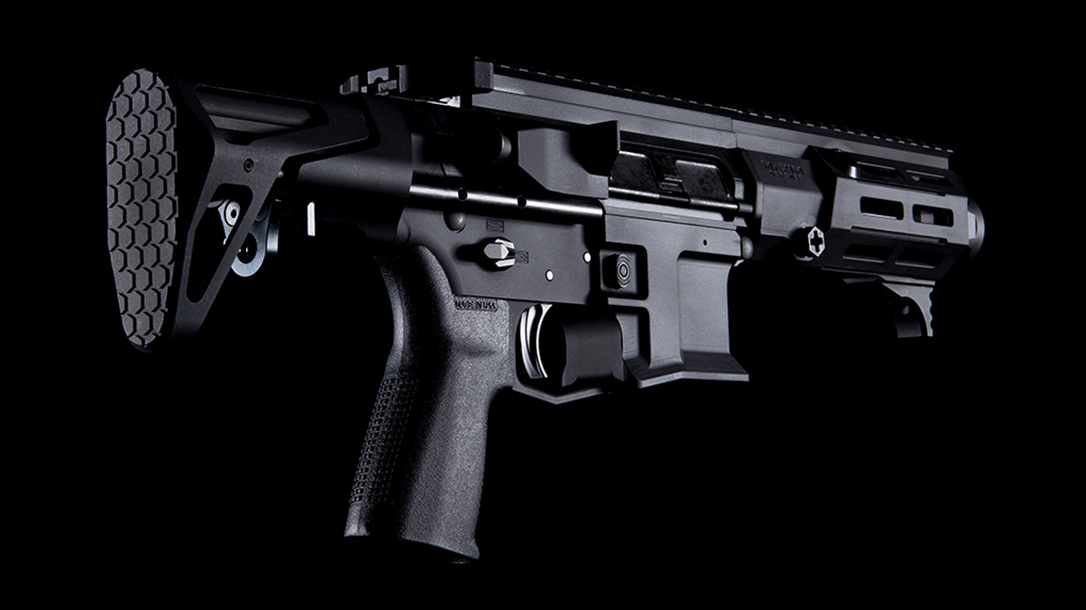 Despite the recent stay of their cease and desist order, the the Bureau of Alcohol, Tobacco, Firearms and Explosives (ATF) has disturbed a hornet’s nest with its reclassification of the Q Honey Badger as a Short-Barreled Rifle (SBR). The pistol brace, or Pistol Stabilizing Brace (PSB), has been in common use for eight years now. There are some four million in circulation. 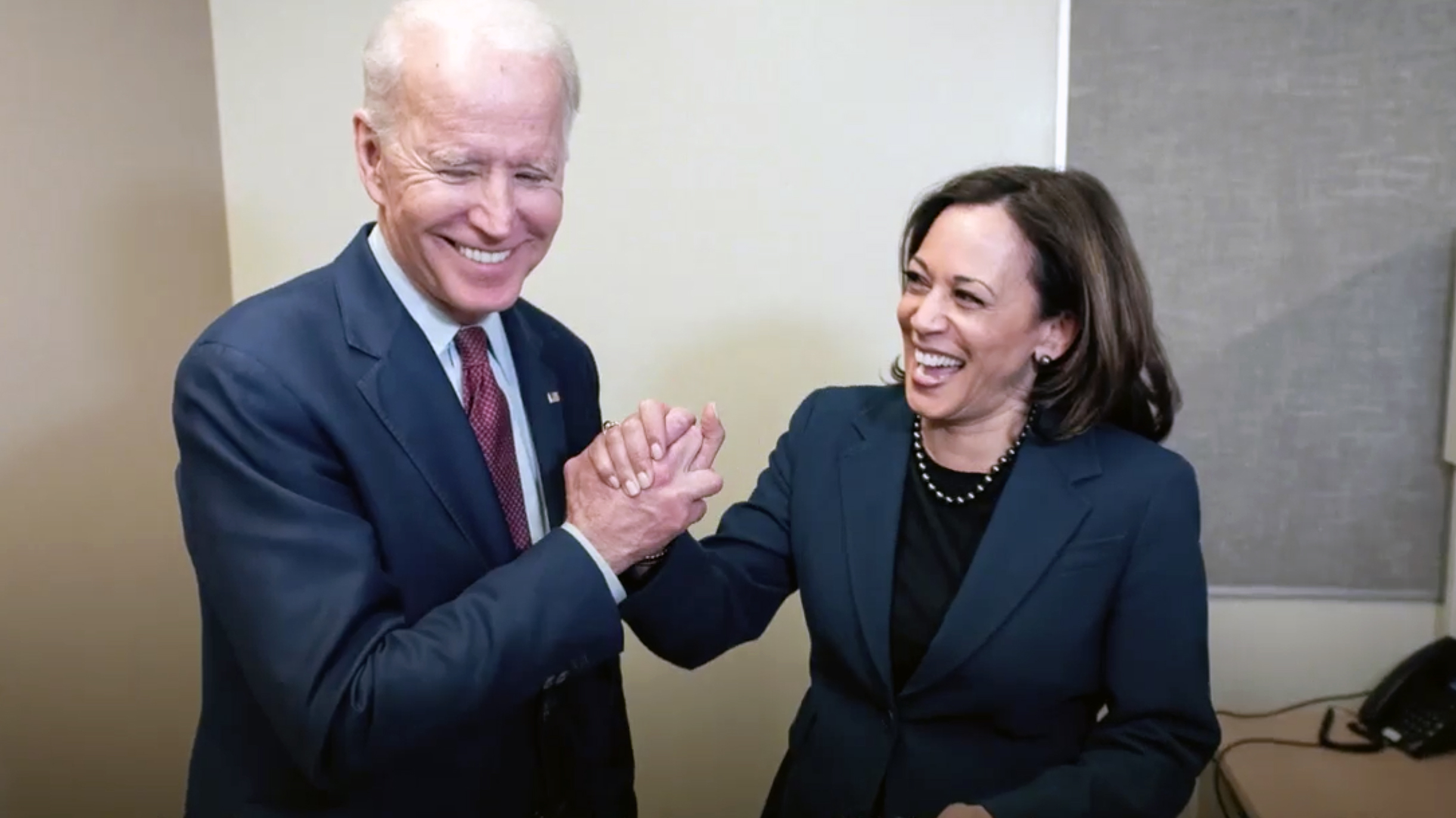 Rick Vasquez is the former Acting Chief of the ATF Firearms Technology Branch (FTB). The FTB makes technical assessments of new guns and gear to determine their compliance with American firearms law. He currently works as a firearms consultant via Rick Vasquez Firearms, LLC. Vasquez kindly agreed to this interview.

In 2012, Alex Bosco of SB Tactical observed a disabled combat veteran struggling to manage a gun safely one-handed and crafted the first Pistol Stabilizing Brace in his garage. This device secured a gun to the shooter’s forearm and subsequently enhanced both safety and control. Bosco duly submitted the PSB to the ATF FTB for consideration.

The techs at the FTB don’t make policy. They interpret the law. The FTB is tasked to apply the letter of these complex laws to an ever-changing commercial landscape.

Bosco pitched that first PSB to the ATF as a tool to help disabled veterans enjoy the shooting sports. Any normal person would find that presentation viscerally moving. However, the FTB techs did voice concerns that approval of the PSB would open Pandora’s box.

They expected that this could eventually lead to serious problems with interpretation and enforcement of firearms laws. Once started down that path it would be nigh impossible to turn around. The ATF nonetheless approved the PSB without any specific criteria concerning applications or general architecture. This did indeed open the floodgates.

There were at least three subsequent clarifications regarding the legality of using a PSB to run a gun from the shoulder. The current legal morass stems from the reality that shooters will inevitably use these devices in ways they were not intended. While that occasional use has been adjudicated harmless, the intentional utilization of a PSB to construct an unregistered SBR is prosecutable. However, establishing that intent is a Gordian task.

In 2018, a 100-percent combat-disabled USMC veteran named Kelland Wright got into an argument and threw his phone against a wall. There was a subsequent allegation of domestic violence. In Toledo, Ohio, such an allegation is grounds for seizure of firearms.

Wright had no criminal history and was maintaining a stellar GPA while studying toward a degree in counseling. His goal was to ultimately serve as a counselor for his fellow combat veterans struggling with PTSD. Law enforcement subsequently seized six firearms and 2,000 rounds of ammunition from Wright’s home.

One of those guns was a heavily customized AR-15 pistol with a Maxim Defense cheek rest. The gun looked strange, so Toledo police notified the ATF, who in turn rendered a professional assessment. The case turned on the fact that Wright had loosely affixed the rubber tip from a walking cane to the base of his cheek rest, ostensibly so the gun wouldn’t fall over in his gun safe.

ATF Decisions on the Pistol Brace

Vasquez explained, “The rubber tip rotated freely and had to be retained in place with a short length of cord. What is astonishing is ATF has the prerogative, under ATF order 3310.4b, to admonish and have a person remove the offending feature that creates the NFA weapon. In this case, under ATF’s opinion the rubber cane tip was the offending feature, and ATF could have simply admonished and directed Kelland to remove it. There was no published criteria on PSBs, there was no intent to make an SBR, and the firearm was not used in the commission of a crime. This would have been the prudent thing to do.”

The government alleged the addition of the cane tip constituted a redesign of the brace, allowing firing from the shoulder. It charged Wright with possession of an unregistered SBR. Vasquez told me that when he left the ATF he resolved never to testify against his agency. However, when the government moved to convict a combat disabled Marine with no criminal record of a felony for placing a cane tip on a pistol brace he felt compelled.

Wright was extremely fortunate. He utilized a public defender at no cost. Additionally, an exceptionally competent legal firm took his case pro bono. This granted Wright access to the resources he would need to make a compelling and vigorous defense. This included Vasquez’s professional testimony.

The ATF has never issued a comprehensive set of criteria concerning what defines a PSB. It has dropped hints in opinion letters issued to manufacturers on a case-by-case basis. However, the ATF stipulates that this guidance does not apply beyond the specific accessory being evaluated. Given the modularity of modern firearms this creates an absolute minefield for manufacturers and gun owners. In the Wright case the infraction purportedly orbited around the length of pull.

The ATF appears to use 13.5 inches as the maximum length a brace may extend behind the trigger face without being considered a shoulder stock. This length of pull limitation lacks description in any Federal statute, regulation or published letter. Instead, it comes from the NRA Firearms Sourcebook which states, “Most standard factory rifles and shotguns have pull lengths of from 13.5 inches to 14.5 inches.”

By all accepted firearm conventions, this measurement comes from the trigger face to the rearmost component of the device along a line parallel to the bore. If measured thusly Wright’s gun, even with the cane tip installed, measures exactly 13.5 inches.

The ATF evaluators, however, measured this distance at an angle from the trigger face upwards to the cane tip, resulting in a distance of some 13.75 inches. Tenth-grade Geometry tells us that the hypotenuse is always going to be longer than the base of a triangle. This would be darkly comical were it not for the fact that a disabled American veteran was about to go to federal prison over this disputable quarter inch.

There was also an objection to a foregrip that protruded at an angle to the left of the bore. All previous ATF opinions stated that a foregrip protruding at a vertical angle downward from the bore would create an AOW (Any Other Weapon requiring NFA registration.)

When questioned by the AUSA (Assistant U.S. Attorney), Vasquez quoted the citation in the NFA guidebook. When queried in court about the foregrip, Wright pointed out that the hollow space inside was actually where he stored his cleaning supplies. Vasquez exposed these cumulative absurdities in court. The jury acquitted Wright in less than one hour, including the time they broke for lunch.

Vasquez explained that lawyers view cases in terms of winning and losing. ATF attorneys preparing a case can get so fixated on winning that they lose touch with what happens to the people in question. Vasquez’s example was that if someone uses a PSB-equipped weapon to rob a bank then they need to go to jail forever. However, failure to adhere to unpublished dicta concerning length of pull and cane tips is hardly legitimate criminal behavior.

Because he used a public defender, Wright was out nothing more than the emotional trauma of this ordeal. However, the fact that the government was willing to destroy a man’s life over something so trivial illustrates the profoundly dangerous nature of these rulings. Wright’s case remains a terribly troubling cautionary tale. 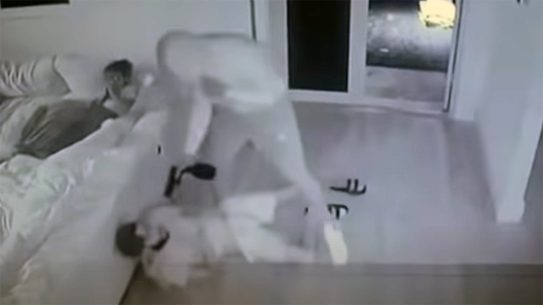 When armed intruders forced their way into her home, a Miami mom sprang into...