by Jay Langston
in Guns, Handguns
0

Originally coined the 9mm Parabellum, creator Georg Luger had his sights set on landing military contracts for his employer, DWM, for his new Model 1900 Parabellum pistol back in 1902. It took old Georg about a decade of rejections by major military arms buyers before things finally clicked with DWM’s P08 “Luger.” The cartridge has become so prolific today that its common moniker, “9 mil,” has become as generic as Coke and Kleenex. 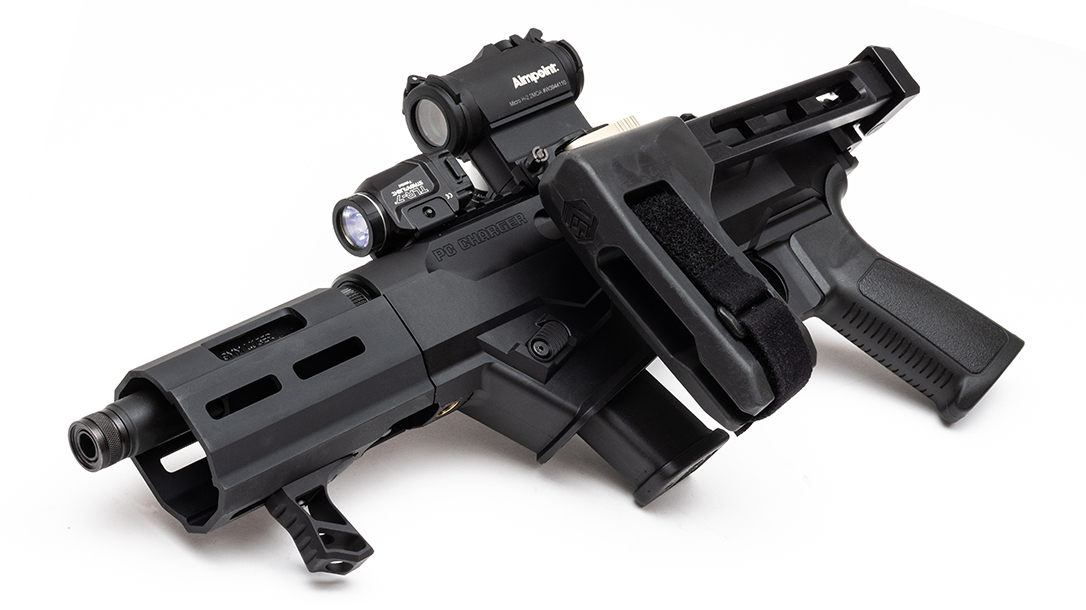 Heard the word “Parabellum” lately? Yep, John Wick III. If you haven’t brushed up on your Latin lately, “Si vis pacem, para bellum” has been around a while. Translated, it means, “If you seek peace, prepare for war,” and was DWM’s company motto back when the German company promoted Georg Luger out of the accounting department to design and sell guns. Naming guns and bullets “Parabellum” was a branding label, much like “It’s the Real Thing” was for Coca-Cola back in the 1970s.

In light of recent events, it doesn’t take much imagination to tweak that mindset to, “If you want security, be prepared to fight.” A few weeks of COVID-19 craziness now seems pretty tame compared to riots, murders and mayhem.

If you’re ready to get your parabellum on, then it’s time to start thinking about a PDW. A couple of pistol-caliber carbines that warrant serious consideration are Sig Sauer’s MPX K and Ruger’s PC Charger.

I got my hands on a PC Charger a few weeks before it was announced to the public and have run it hard on the range since then. The PC Charger comes from the factory with a couple of magazine well inserts to run Ruger’s SR-Series magazines or Glock magazines. You can also order a Ruger American Pistol magwell insert at shopruger.com. The first thing I did when I took the PC Charger from the box was swap inserts to run Glock mags. I carry a G19 almost daily, so outfitting the new Ruger to run compatible mags made perfect sense. A buddy gave me a couple of 30-round, off-brand, Glock-compatible stick magazines and they work just fine, too.

Older Glock magazines that feature only one magazine latch slot might still be used with the PC Charger, but the magazine release button must remain on the left side of the pistol as shipped from the factory. Don’t reverse the mag release button when using this type of magazine as the mag will not properly lock into place. Early versions of Glock-brand mags with a “U”-shaped notch at the rear of the magazine feed lips will not function in the PC Charger.

The Charger’s CNC-milled handguard is Type III hard-coat anodized aluminum, incorporates a takedown block and features Magpul M-LOK-compatible slots at 3, 6, and 9 o’clock for easy mounting of compatible rails and accessories. The 6 o’clock position of the CNC-milled handguard wears a factory-installed handstop for secure hand placement.

Easy takedown enables quick separation of the barrel/forend assembly from the action for ease of transportation and storage. Takedown is as simple as locking the bolt back after verifying that the pistol is unloaded, pushing a recessed lever, twisting the subassemblies and pulling them apart. This rig has no problem holding zero after takedown, either.

Its dead-blow action features a custom tungsten dead-blow weight that shortens bolt travel and reduces felt recoil and muzzle rise. The bolt is machined from heat-treated, chrome-moly steel to ensure strength, structural integrity and durability. The receiver is machined from 7075-T6 aluminum billet, is Type III hard-coat anodized and includes an integrated Picatinny-style rail. One thing to note is the receiver-mounted, Picatinny-style rail is designed to accommodate most optics and optic mounts intended for use with Picatinny/ MIL-STD 1913 rails. However, due to reduced clearance between the top of the receiver and the bottom of the optics rail, optics and optic mounts that extend more than 0.275 inches below the top of the rail might not fit the PC Charger.

If you are familiar with a 10/22 trigger you won’t get any surprises with the feel of the PC Charger’s. The test gun’s trigger had a smidge of creep and overtravel, and it broke at 4.5 pounds.

A chrome-moly steel barrel is cold hammer forged, and the heavy-contour barrel provides consistent accuracy as we’ll cover in a bit. The muzzle is threaded ½-28 TPI, which is fairly standard for 9mm pistol barrels. It is right-hand threaded, so a suppressor will unscrew after a long range session if not tightened thoroughly. It comes from the factory with a muzzle protector.

This pistol comes with one SR-Series pistol magazine and hex wrenches for disassembly of the pistol and charging handle removal.

Sig’s MPX K achieves a high standard of quality in both innovation and build. The MPX K offers a closed-bolt, short-stroke gas piston system that is ultra-reliable and durable. As with all MPXs, the K variant is modular, allowing for multiple handguard and barrel length choices, and is suppressor ready.

Beginning in 2019, the K now features the Sig PCB folding brace, which allows the K to fold into an ultra-compact size and be operable in the folded position. The K also features an updated M-Lok handguard, and additional accessory rails in multiple lengths are offered for suppressor coverage.

Finally, the K is upgraded with the ultra-smooth, ultra-fast Timney single-stage trigger. Co-designed by Timney and Sig, this trigger offers the Timney reliability shooters expect from the punishment a sub-gun weapon delivers.

The Sig MPX series has evolved quite a bit since its initial introduction. Magazine design has been tweaked a couple of times, as well as the barrel retaining system. The bolt and bolt carrier have seen design changes at least twice, and barrel gas ports have been offered in multiple sizes. The MPX K’s firing pin setup and recoil springs are on their third generation of designs, too. Seems like Sig has the K figured out, since the gun tested for this article has more than 1,200 rounds and took the abuse like a champ.

Other specs for the K include a 4.5-inch cold hammer-forged barrel with a 1-in-10-inch twist. The muzzle is left-hand threaded M13.5x1mm.

The Ruger PC Charger is a pound heavier than Sig’s MPX K when you attach a folding SB Tactical brace to make things as even as possible. With braces folded, the Ruger is only a smidge longer than the Sig. The MPX K uses proprietary 30-round magazines, while the PC Charger offers a few options. I replaced the SR-Series magwell block before testing with the supplied Glock magazine block so I could run G17/G19 magazines.

Fired across a chronograph set up at 10 feet, the Ruger’s 2-inch longer barrel boosted velocities between 23 and 64 fps with some loads, while the Sig posted higher velocities with others.

Accuracy was comparable between the two pistol-caliber carbines, too. At 25 yards, multiple five-shot groups from either gun produced tight clusters. The way these guns were set up with optics for a large portion of shooting was with a pair of Trijicon Ascent 0x-4x variable scopes. Different shooters will have different opinions on which optic to mount on their own PCC weapons, but I have a long-time preference for a more traditional crosshair scope. Set to zero magnification I can acquire targets quicker with both eyes open, and the option to raise magnification to 4x really helps with precise shot placement throughout these weapons’ usable range.

Suppressors were attached to both weapons: The SIG got an AAC Ti-Rant, while the Ruger got a SilencerCo Osprey. From a looks standpoint, the Osprey’s profile matched well with the profile of the PC Charger’s handguard. A longer optional handguard would be a good upgrade to cover as much of the can as possible. The accompanying chart reflects both guns performance with cans attached.

The most glaring handling difference between the PC Charger and the Sig MPX K was switching back and forth from Sig’s AR-style fire-control lever and the PC Charger’s cross-bolt safety that is located in the rear of the triggerguard. Both work fine, so that’s a matter of personal preference.

Both of these weapons ran a wide variety of factory loads, with each one only producing two “stove pipes” over the course of running more than 1,200 rounds through each gun.

From a performance standpoint, these guns ran neck-and-neck throughout this trial. The PC Charger retails for $799, while the MPX K comes in at $2,162. At this writing, the few retailers who have them in stock are getting top dollar. Adding the SB Tactical FS1913 aluminum strut folding brace like I did to the Ruger will raise the price about $250. It all comes down to whether or not you are willing to pay twice as much for a gas piston, rotating lock-up action vs. a blowback action. I avoided picking between the two by buying them both. I have a feeling I’ll stay pretty busy on a progressive reloading machine this summer to keep them both fed.

This article is from the November-December 2020 issue of Combat Handguns magazine. Grab your copy at OutdoorGroupStore.com.