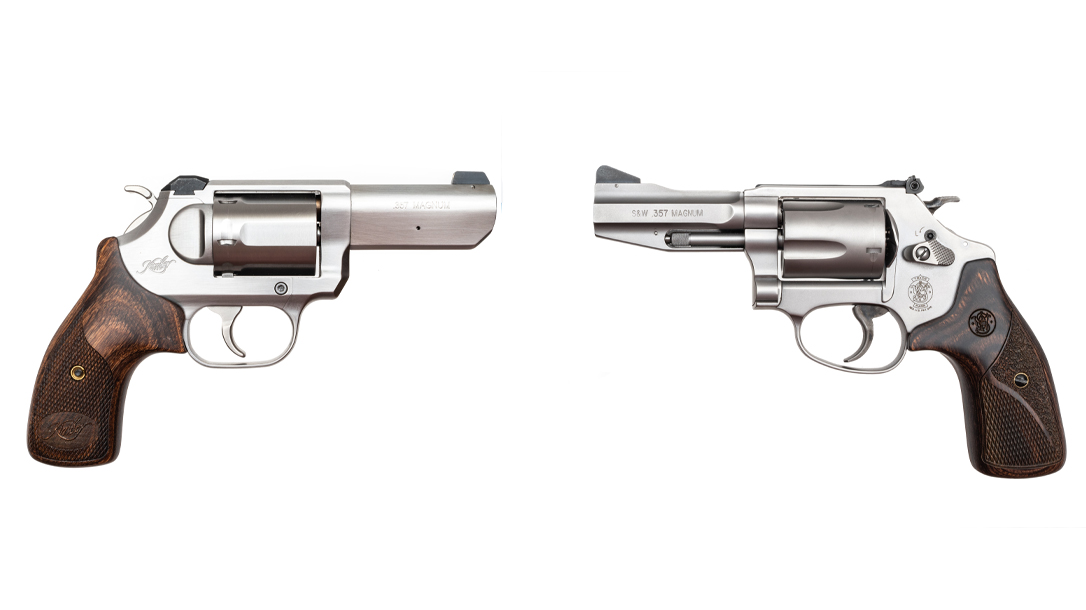 We won’t be getting into the revolver versus pistol debate here since that topic has been done to death umpteen times, but there’s no denying the power of the .357 Magnum revolver round. Instead, for our head-to-head comparison this issue, we’ll roll with the assumption that some folks still like and appreciate a compact, well-appointed powerhouse of a wheelgun for a carry piece. 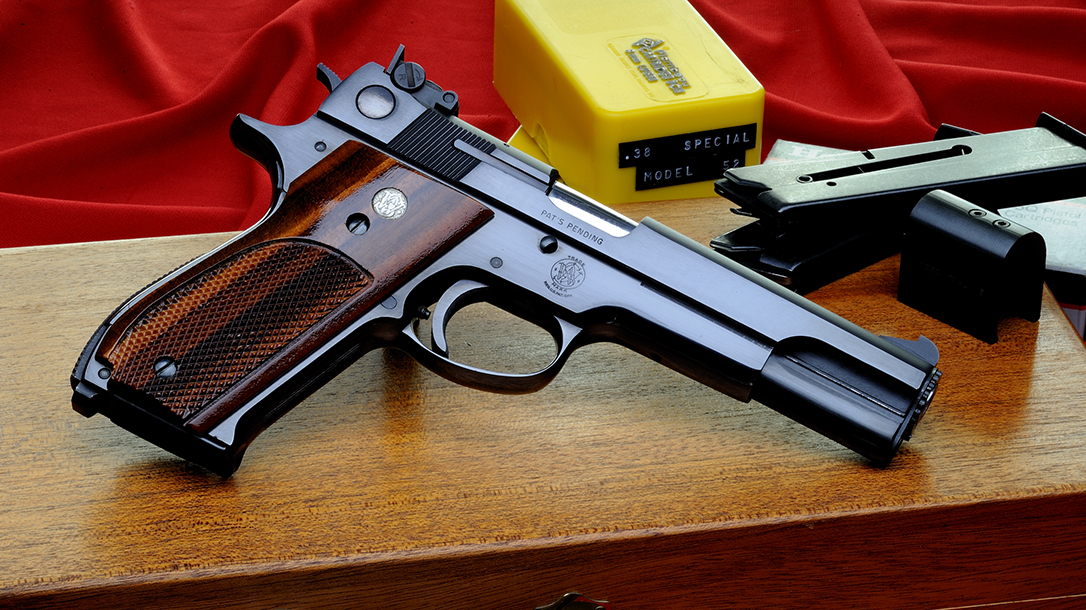 Whether it’s for .357 Magnum revolver for self-defense in an urban environment or lightweight protection on the trail, that’s just what they’ll get with the new Kimber 6s DA/SA and the Smith & Wesson Performance Center Pro Series Model 60.

Over the years, there have been a few variants of the Model 60 produced, and the company’s current catalog offers four models. I requested The Pro Series Model 60 to keep the pricing close to the Kimber offering so as to compare “apples to apples” with regard to value. Pro Series guns from Smith & Wesson are basically a step up from the standard models with a few additional features.

The Performance Center Pro Series Model 60 features a 3-inch, slab-side barrel that is quite stylish and a nice departure from the looks of the standard version. The five-shooter’s all-steel construction bears an attractive matte (or satin) finish, which also adds to its aesthetic appeal. Another nice visual upgrade is the ergonomic and very comfortable wood grips, which replace the standard version’s synthetic grips.

The Pro Series upgrades aren’t all about sex appeal, however, as the little heater’s front sight blade has also been fitted with a tritium insert to facilitate easier low-light shooting. Other notable features on the PC Pro Series Model 60 include serrations on the topstrap and atop the barrel to reduce glare, a windowed underlug and a fully adjustable rear sight to dial in your favorite load.

The PC Pro Series Model 60 maintains a small enough footprint for easy, all-day carry on the hip, whether concealed or not. While the trigger wasn’t tuned by the factory, it still had a clean, smooth double-action pull that measured 10.25 pounds before the break. The single-action pull was quite nice and very light, with a crisp break at just 2.75 pounds.

All in all, and from initial observation, the PC Pro Series Model 60 appeared to be a well thought out and very competent defensive package for its price, though time at the range would truly tell the tale.

It was just a few years ago that Kimber Manufacturing stunned the shooting world with the introduction of its new K6s revolver. The K6s packed six rounds of .38/.357 ammunition into a frame roughly the size of Smith & Wesson’s J-frame models, making it the smallest six-shot .357 Mag revolver on the market.

The capacity alone was a pretty big splash for an introduction, but it turned out there was a lot more to like about it. The original K6s was a double-action-only revolver with no external hammer, requiring a longer, heavier trigger pull for each shot. This wasn’t really a negative since many folks were reporting on the excellent DA pull. However, Kimber’s newest model, the K6s DA/SA, boasts an external hammer, giving the user the option to cock it for a lighter single-action pull.

It was the K6s DA/SA that I received for this match-up. I requested the 3-inch barrel version, though Kimber also offers barrel lengths of 2 and 4 inches. Out of the box, the Kimber 6s DASA was noticeably heavier than the Model 60. With its beefy barrel and frame, the diminutive six-shooter tips the scales at 25 ounces, which should obviously help with recoil.

The Kimber K6s DA/SA features all-steel construction and sports an attractive brushed-stainless finish. One immediately obvious difference from the Model 60 is the use of a three-dot sight arrangement via a dove-tailed rear sight and a pinned front sight. Though not adjustable for elevation, windage can be adjusted by drifting the rear sight. Another difference is the use of a push-button release for the cylinder. For the Smith, the user has to push the release forward to swing out the cylinder.

I really liked a couple of the Kimber K6s DA/SA features. First, the checkered hammer was wider than that of the PC Pro Series Model 60, making cocking it a more confident process. Also, the hammer had more of an upsweeping arch to it where the Smith’s hammer is a little more low-profile. The Kimber’s hammer was quicker and easier to access, though I suppose it might hang up on things easier as well.

The double-action trigger pull was a tad heavier at 10.5 pounds before the break, but I actually liked the feel of the Kimber’s DA pull better. It’s tough to explain why, but it was just a personal preference. The Kimber’s SA pull was also a bit heavier at 3.75 pounds. It was not as crisp as the Smith’s SA pull, but still light enough for a precision shot once the hammer was cocked.

While the top had no serrations, the backstrap was serrated more for appeal than function, and the semi-checkered walnut grips did provide a bit of traction and add a classy bit of flair to the overall package. As classy as it is, the K6s DASA rings in at a price of $970, a good $150 more than the Smith—even with the Smith’s Pro Series upgrades. It was going to be interesting to see if Kimber’s latest contender could perform well enough to command that higher premium.

Even with the incredible ammo shortage right now, the good folks at Hornady helped out with the match-up by providing a few boxes each of their 125-grain FTX Critical Defense, 135-grain Critical Duty and 158-grain XTP .357 Mag loads, as well as the company’s 110-grain, .38 Special FTX Critical Defense load. To keep things fair and balanced, we also threw in some 125-grain .357 Mag rounds from both Speer and Sig Sauer. Suffice to say, the little revolvers got quite the workout.

As expected, there was a felt difference between the K6s and the Model 60 during recoil. The extra weight of the K6s made shooting the heavier loads just a bit more manageable, though the end user might prefer the lighter weight of the Smith for all-day carry. I will say that after the first few boxes of the heavier stuff, the Pro Series Model 60 started to take its toll on us, more so than the K6s DA/SA.

In fact, my shooting buddy lost a little skin on the Smith’s cylinder release during recoil, and I lost a bit in the web of my hand from the top corner of the backstrap. With some loads leaving the 3-inch barrels in excess of 1,380 fps, there’s only so much you can do to mitigate the laws of physics.

The Kimber’s biggest advantage, however, was that one extra round. With similar grip materials and all-steel construction, as well as similar trigger pull weights, the extra $150 premium in the Kimber’s price really boils down to that extra round and a little less felt recoil. Who knows? If things go sideways, that extra round might just make all the difference.

These were very similar revolvers from two great companies that offer top-quality firearms. The differences between the K6s DA/SA and the Performance Center Pro Series Model 60 are subtle and very subjective. I liked the Kimber’s sights and trigger pull better, but I preferred the lighter weight of the Smith for easier carry. My friend preferred the Model 60’s trigger pull, but he definitely liked the extra weight of the Kimber to help with the felt recoil.

It’s all about finding the right balance of features for price and weighing your priorities. You won’t go wrong with either .357 Magnum revolver whether you need a home defender, a CCW or a relatively lightweight trail companion. Choose the one that best suits your needs and it will surely serve you well. For more information, visit kimberamerica.com and smith-wesson.com. 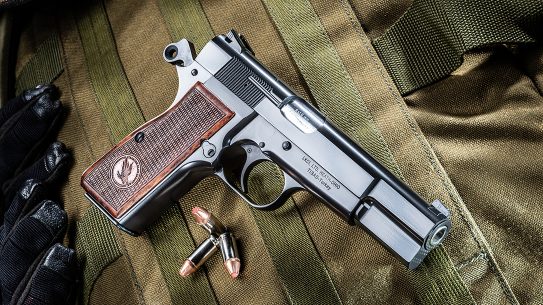 A faithful take on the iconic Hi-Power semi-auto with modern enhancements, the Regent BR9,... 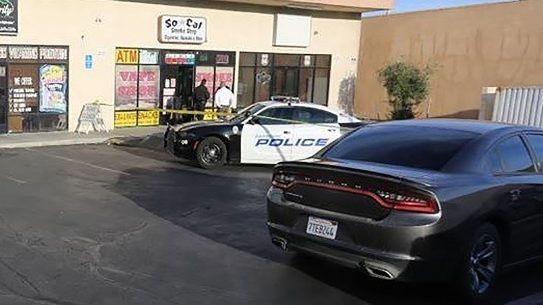