It’s a gun so iconic that it served both the Axis and Allies during WWII and at one time was used by more than 50 different militaries. Elite military groups like the British Special Air Services (SAS) and premier law enforcement teams like our own FBI Hostage Rescue Team used the gun because of its large capacity and reputation for reliability. 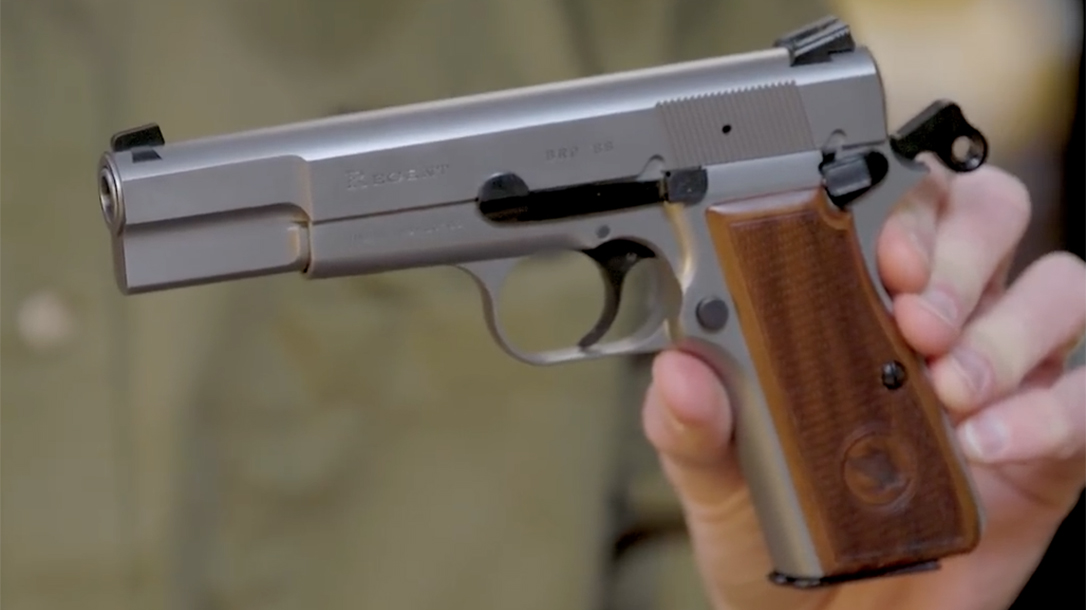 How the Regent BR9 Came to Be

Both licensed and unlicensed copies of the popular gun have been produced in Belgium, Portugal, Israel, China, Argentina, Hungary, India, Nigeria, Indonesia, Bulgaria and now Turkey. This list is not all inclusive, but gives you an idea of just how popular the Browning Hi-Power pistol was. Also known as the Grand Puissance or P-35, the gun’s development started with a solicitation by the French military for a new sidearm. Fabrique Nationale (FN) tasked John Browning with its design and this placed him in an unusual position of having to circumvent his own patents on the Colt 1911.

Browning passed away in 1926 while still working on the Hi-Power and subsequent development was carried out by FN’s Dieudonne Saive, a design engineer. In fact, the Hi-Power, as we know it today, is the end result of much of Saive’s hard work. According to one account, Saive designed the staggered-column magazine that gives the Hi-Power its large capacity and presented it to Browning. Browning gave the magazine a very critical examination followed by extensive testing before issuing his approval.

Saive continued to refine the gun’s design until 1934 when FN decided it was ready for production. France never did adopt the gun, but the Belgian military did and production began in 1935, hence the P35 moniker.

Due to its large capacity, ease of maintenance and reliability, the Hi-Power also became popular with civilians and the gun was long a staple of the Browning lineup. In 2017, after 82 years of continuous production, Browning announced the discontinuation of the gun. In a world flush with striker-fired, polymer-framed, high-capacity handguns, demand for the Hi-Power waned. It was an expensive gun to produce and the machinery used to make the guns was wearing out, so it just didn’t make sense to invest in new equipment at a time when demand was at an all-time low. It was the end of an era.

But the Hi-Power had earned its place in history and is no more obsolete than the 1911 pistol. As prices climb for the now-discontinued gun, it looked as though a whole new generation of shooters would be excluded from enjoying this historic pistol. Until now!

In 2018, LKCI began importing the Regent BR9 pistol, a clone of the commercial Browning Hi-Power. Manufactured by Tisas in Turkey, the gun is a virtual copy of Browning’s pistol, so much so that parts will interchange with the original gun. Tisas uses a 4140 investment cast-steel frame and a slide machined from a billet of the same material. In a departure from the original gun’s specs, Tisas uses a stainless-steel barrel.

The BR9 is a well-finished gun. Examination of both the frame and slide reveal very few machine marks and even the inside of the frame’s dust cover is well-finished, as is the inside of the slide. Frame to slide fit is exemplary, and with the slide in battery there is virtually no discernible play between the parts. The gun’s thumb safety is also well-fit and disengages with about 4 pounds of pressure. Tisas equips the BR9 with low-profile three-dot sights that are dovetailed into the slide.

Our test gun was Cerakoted black and the finish was so well applied that I initially thought the gun had been blued. The BR9 is also available in stainless steel at a slightly higher price.

Development of the Hi-Power started as a military request by the French, and in that solicitation was the requirement for a magazine safety, which would prevent the gun from firing when the magazine is not in the gun. The Regent BR9 is so equipped, making it so that depressing the magazine release drops the magazine approximately 0.375 inches, but it will not fall free from the gun. There are pros and cons to its inclusion, though most Americans favor a gun without this feature. The spring-loaded magazine safety pushes the trigger lever out of engagement with the slide-mounted sear lever when the magazine is out of the gun. Removing this safety feature will allow the gun to fire without a magazine in place and sometimes results in a better trigger pull. It is not a difficult procedure and can usually be done by the shooter without much trouble.

LKCI’s website lists the BR9’s trigger pull at 5.5 pounds. My test and evaluation sample registered at 7 pounds with the usual grit and creep associated with the standard Hi-Power. Over the years I’ve had the chance to shoot numerous commercial and military Hi-Powers, and the BR9’s trigger is no better or worse than most of those guns.

With that in mind, I tested the gun’s accuracy at 25 yards. Using a DOA Tactical bench for support and resting the pistol’s dust cover on a Millett BenchMaster I was able to keep the sights aligned while I added pressure to the trigger until the shot broke. I like the sights on the BR9 and consider them a huge improvement over the original gun’s sights. My T&E gun’s sights were well-regulated and shot to point of aim at 25 yards. The groups listed in the accompanying chart are the best of five groups fired.

Despite the gun’s heavy trigger pull I was pleasantly surprised with the accuracy. The average group size for the three loads tested was just 1.48 inches! My single best five-shot group was fired with DoubleTap’s 77-grain hollow points and measured 0.87 inches, and the average group size for the five groups fired was only 1.14 inches. This DoubleTap load has been a favorite of mine for quite some time. It always performs admirably, producing outstanding accuracy and flawless reliability, and with its light projectile produces very little recoil. It accomplishes this without producing too much pressure, and that’s a good thing as the BR9 is not rated for +P ammunition.

Throughout my testing the BR9 performed flawlessly. Not once did the gun bobble or choke with any of the loads I tried in it. The Mec-Gar 13-round magazines shipped with the gun locked the slide open on the last shot 100 percent of the time.

Shooting 9mm through a steel-framed gun is a lot of fun. The BR9 weighs 32.3 ounces with an unloaded magazine or 38.3 ounces with 14 rounds of 115-grain ammo. Recoil was minimal, and the graceful contours of the grip frame make it a natural pointer and help control the gun during rapid fire.

Tisas made a wise decision to upgrade the BR9 with the external extractor and low-profile sights. The use of a stainless barrel and the post-war, commercial-style external extractor make a lot of sense for today’s shooters. The rowel-style hammer prevents hammer bite that was so common with the spur-style hammer. One thing I wish they would do is include an extended thumb safety on the gun. Being a single-action autoloader, it should be carried cocked and locked, just like a 1911, but the original style thumb safety is just too small to disengage easily.

Fortunately, Cylinder & Slide (cylinder-slide.com) makes an extended safety that should drop in without much trouble and allow shooters to carry the BR9 as a CCW gun. The company also has an extended ambidextrous thumb safety for left-handers or those wanting to use the BR9 as a competition gun. Cylinder and Slide is your one-stop shop for all things Hi-Power related. They make quality parts and are a wonderful resource whether you own a new Regent BR9 or are trying to rehab an old Browning Hi-Power.

My criticisms of the BR9 are few and, by the way, also the same ones I’ve had with commercial Browning Hi-Powers over the years. The trigger pull is too heavy and gritty, and the thumb safety needs to be replaced with an extended version. Take care of those two things and you’ll have a first-class self-defense gun. The BR9 will give shooters the opportunity to experience the Hi-Power for much less than the original classic gun. Priced at $559 the Regent BR9 is a solid, well-made version of the classic Hi-Power pistol. For even more info, please visit lkcillc.com and regentarms.com.