by Steven Dick
in Guns, Handguns
0

I have to admit I didn’t pay much attention when Sig Sauer first introduced their polymer framed, striker-fired Model 320 in 2014. Anyone over 50 will probably know what I mean when I say age had suddenly made my arms too short for most conventional iron sights. At the time, I had just started to explore the world of red dot reflex sights on both handguns and rifles. First a Winchester 94 .44 Mag Trapper was converted to a red dot, followed by a .44 Mag revolver, another rifle and then a couple of more handguns. These experiments convinced me that electronic sights were a workable solution for advancing age and far-sighted tendencies. 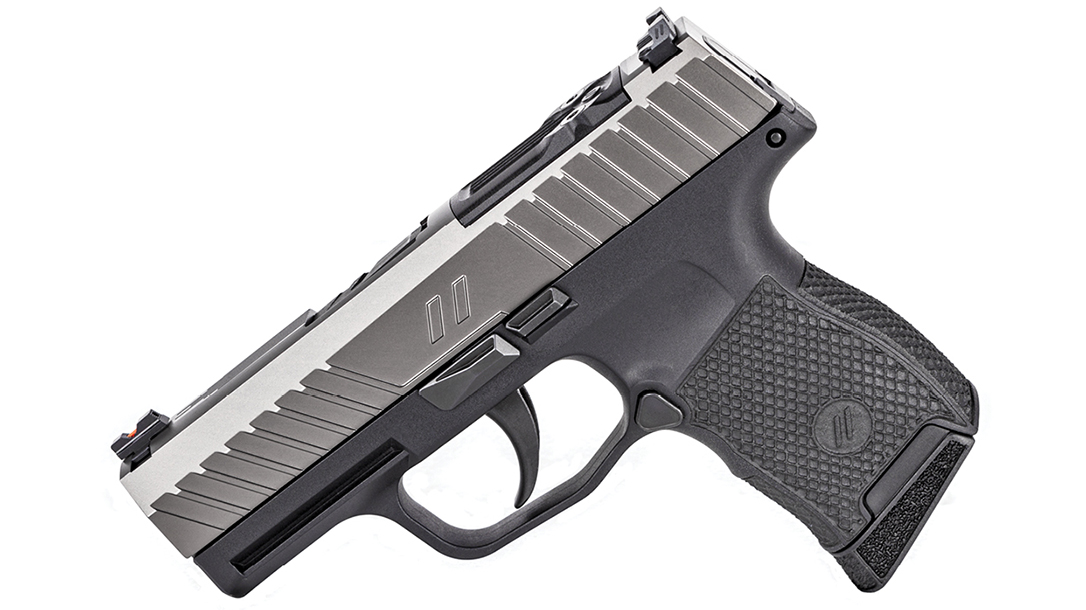 Then in mid-2016 I noticed that Sig had introduced a new variant of their M320 handgun that came standard with a reflex sight pre-mounted on the slide. For those that haven’t dealt with electronic handgun sights before, when they first came to market you had to take your handgun to a gunsmith to have the slide milled out for a mounting plate. Then a few companies started offering models with the slides pre-milled for standard sight plates. However, the sights themselves remained very expensive, often equally to the value of the handgun they were being mounted on. Sig was now offering a practical service grade handgun complete with their own electronic sight factory installed for around $1,000 —that seemed like an incredible deal to me.

Red dot reflex sights have several advantages over open iron, starting with the fact all you need to do to align them on target is place the bright red dot on the desired point of impact. Most handgun misses can be traced a failure to perfectly align the front and rear sight, left, right, up and down. Even a small error in any of these four directions can result in a hit far from the intended point of aim. If your vision no longer allows you to focus correctly on front and rear sights, a single bright-red dot is far more fool proof.

Then there is the advantage they offer in low light situations. Statistically, most self-defense shooting take place at night time and/or in darkened situations. While reflex sights don’t actually project their electronic dot on to the target, the shooter can still see the light spot even in a dark room. If the target is visible at all, the dot can be aligned on it far easier than with traditional sights.

While the RX version of the 320 comes in a choice of 9mm or .40 S&W, I found only the 9mm was easily available. According to current FBI theory, that is the best caliber for a defensive handgun so I wasn’t too disappointed. The standard 320RXP is a relatively large handgun best suited to belt carry rather than concealment. At 30 ounces unloaded, it seems like a light weapon but that 17 round magazine (115-grain HP) adds another 10 ounces. Of course, this is true of all polymer framed handguns with standard capacity magazines.

Along with the polymer frame, the slide is stainless steel with Nitron finish and the 4.7-inch barrel is carbon steel. For those that require it, there is a rail mount under the handgun frame for lights, lasers or other accessories. A lot has been made of the ability of to switch components and calibers on the standard M320 but, as far as I can tell, that is a little more complicated on the Romeo sight mounted-slides. For the time being, I will be satisfied with my 9mm version.

One of the statements you often read in new handgun reviews is that you will probably need to run “XX” amount of ammo through the weapon to “break it in,” otherwise you shouldn’t expect 100 percent reliability. I would like to happily report that after several hundred rounds of both standard and +P ammunition in the full range of 9mm bullet weights I have yet to have a single malfunction of my 320.

Chronographed velocities all tended to fall a little under the published factory specs. However, this could be due to the 4.7-inch barrel instead of a 5-inch test weapon. DoubleTap’s +P 115-grain Nosler jacketed hollow points gave the highest velocities, with a five-round average of 1,354 feet per second (fps). For those favoring a little more bullet weight, Speer Gold Dot 124-grain +P JHP averaged 1,227 fps. For those into the deep-penetration 147-grain school of defensive 9mm ammunition, Federal’s 147 HST +P turned in a very respectable 1,039 fps.

While hunting down ammo to test in my 320, I noticed a certain amount of controversy about using “NATO Spec” 9mm in civilian handguns. NATO Spec seems to be loaded to a slightly higher pressure than standard civilian ammo. One commenter on the web remarked that “about half of the world’s military carry it in their sidearms,” so I shouldn’t worry about it. Others warned not to shoot the hotter rounds in anything that not rated by the manufacture for it. Given that our military just adopted this particular model for their use, I assume that is a pretty good reason to think these rounds shouldn’t present a problem. NATO Spec actually turned in higher velocities than the factory catalog, with Winchester 124-grain FMJ crossing the screens at an average of 1,180 fps.

Ordinarily, I consider 9mm handguns of limited usefulness as hunting weapons because they both lack adequate power for large game and accuracy for small. I mention that because in a real survival situation, I would prefer to be ready to take any potential quarry I luck upon with whatever firearm I have on me. If you have read other of my handgun evaluations, you will probably know that I consider 50-foot accuracy critical. Either it needs to group inside the diameter of a rabbit head (2.5 inches) or better yet, a grouse head (1-inch). The SIG 320RXP proved to be one of the few 9mm handguns I’ve used that I would consider well-suited to small game hunting. The Winchester PDX1 147-grain load, for instance, easily made my 1-inch group requirement.

Going back to defensive carry, 17 rounds in the magazine and a couple of spares on your belt should take care of most potential situations. I know some that have never been in close-range firefight will question the need for that much ammunition. Trust me on this, no one has ever come out of a gun fight thinking “Why did I bother carrying so many magazines?” The longer I was in Vietnam, the more ammo I carried, even if it meant leaving other luxuries, like food, behind. There was no way I was going to let anyone say they found me KIA next to an empty weapon. I feel the same way about this as a civilian of many years.

Out of the box, the Romeo sight was relatively close to the correct point of aim. Given that the sight is fully adjustable for elevation and windage, it was a simply a matter of shifting it over to get on target. Red dot sights tend to take a little learning curve to shoot quickly. The trick is to look for the front sight through the Romeo and the red dot will instantly appear. While there are five brightness settings on the sight, I tend to use the upper levels as they worked best with my aging eyes. This is a three-mm dot which might be a little large for very precise target work, but it functions well for most other types of shooting.

There has been a certain amount of argument about battery life on the Romeo. I’ve read everything from two weeks to a couple of years. While the sight does have a motion sensor to turn it off when not in use, some users feel this doesn’t occur in a holstered handgun. I tend to turn off any electronic sight when I’m not carrying it. I’ve been working with the Sig 320RXP for a couple of months now with no battery problems. Given all batteries fail eventually, the proper solution is probably to make sure you have a couple of spares and change them out on regular basis. If all else fails, the electronic sight can be easily removed and the good, old-fashioned open iron used.

There was a time when I thought all my future with defensive firearms was going to be focused on shotguns. However, the Sig 320RXP has put me back in the handgun game. I highly recommend this type of reflex sight for shooters of all ages. For even more info, please visit sigsauer.com.

This article is from the December 2020-January 2021 issue of Personal Defense World magazine. Grab your copy at OutdoorGroupStore.com.