Most savvy gun folks know that Glock didn’t invent polymer-framed pistols, but Glock was the company that made them mainstream. With the introduction of the G17, the gun world has never been the same. Nearly every major pistol manufacturer has since introduced its own version of a modern, polymer-frame, striker-fired pistol. So today we compare two popular choices: the Glock 48 MOS versus the Mossberg MC2c. 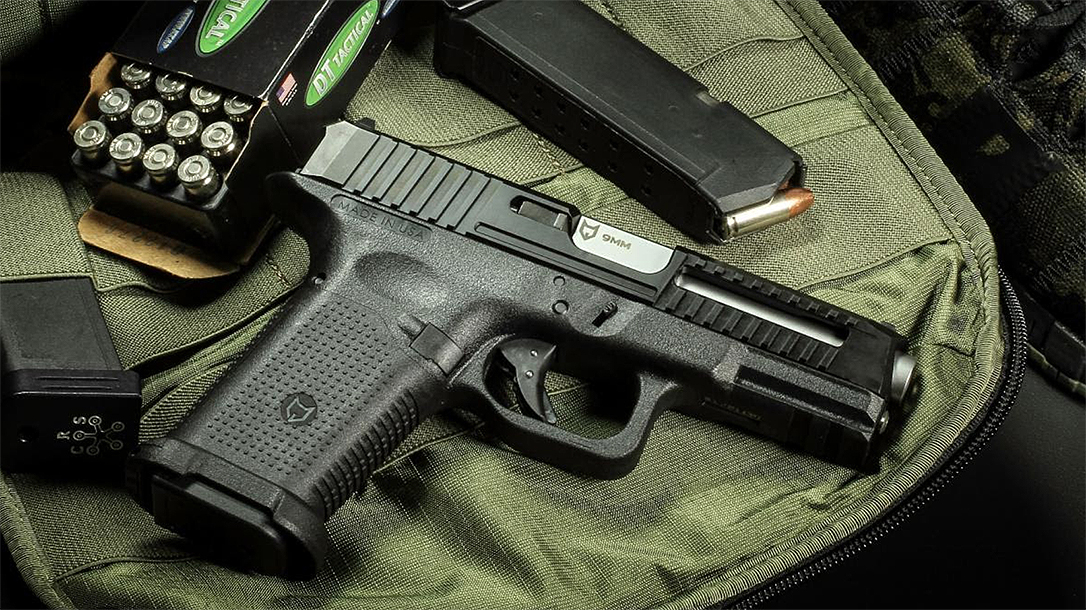 Surprisingly, even Mossberg jumped into the fray just a couple of years ago with its own iteration, the MC1sc subcompact, after nearly a century of not producing handguns. Just recently, Mossberg offered up its latest model, the MC2c, which has as its closest competitor the Glock G48. In this edition, we pit the two against each other to compare strengths and weaknesses, and to find out if Mossberg can out-Glock the Glock.

It’s only fitting that we look at the Glock pistol first. Because of their extreme reliability, the Glock lineup is really what all other polymer-frame, striker-fired pistols are measured against. The G48 MOS (Modular Optic System) is Glock’s newest pistol offering that offers a milled slide for the installation of a miniature red-dot sight, which is becoming more and more popular on carry pistols these days.

The G48 MOS is based on the single-stack form factor that began with the six-round G43. Because of its small size and slender profile, the G43 was an immediate success due to its ease of concealability, even with pocket carry. Naturally, there were some buyers that, while liking the single-stack profile, felt limited by the low round count. Glock responded with the G43X and the G48, both of which had taller grip frames to accommodate a 10-round magazine.

The Glock 48 MOS offers some of the company’s latest upgrades including a reversible magazine release and front cocking serrations. As part of its Slimline series, the G48 MOS also features a shorter trigger distance, a Slimline mounting rail for accessories and an improved match-grade barrel. Perhaps the most impactful upgrade, at least for me, is the built-in beavertail. The slides on most Glocks from earlier generations tended to catch the skin on my hand when cycling, and the new beavertail design completely mitigates that issue for me. The G43X has the same beavertail design and is one that I carry on a regular basis.

The Glock 48 MOS features the same subtle grip texturing you’ll find on Gen5 pistols. It’s serviceable enough, but I feel it could be much better to really lock in the user’s grip for control. On the other hand, the barrel and slide are both treated with a nitride finish and then topped off with a black oxide treatment for excellent corrosion resistance against perspiration and the elements.

The pistol I received for review was a blue-label version and came with three-dot tritium sights installed. However, according to a Glock rep, these aren’t available from the factory to retail buyers. Instead, Glock’s standard three-dot sights are supplied for an MSRP of $582 for the MOS variant.

The trigger on the sample pistol I received for review was rather nice for a Glock. It had a fairly crisp break at an average of 5.35 pounds and it didn’t have the mushiness you associate with older generation striker-fired pistols. While the Glock folks haven’t really made any radical changes to their lineup over the years, they get my respect for the incremental improvements they’ve been making along the way.

Mossberg is no babe in the woods when it comes to the gun industry, but it is still a relative newcomer to the world of modern pistols. Even so, the company has been strutting its stuff lately with some excellent offerings in the pistol market like the new MC2c, which is a 9mm compact that’s really a scaled-up version of the original MC1sc subcompact.

In contrast to the Glock’s somewhat boxy styling, the MC2c showcases a more rounded grip frame that offers that soap-bar feel in the hand. The MC2c settles very comfortably in the hand while offering superb control due to the excellent grip texturing. With different styles of texturing on the sides and both the front and backstraps, the user has no problem locking in with a sure grip during fire.

The texturing also continues up top with index pads on the frame and angled serrations at both the front and the rear of the slide for confident manual manipulation. That slide is created from 416 stainless steel and features a black DLC finish for superb protection against wear and the elements, though a matte-stainless slide is also available. The model I received included TruGlo’s Tritium Pro sights, and while they’re definitely worth the upgrade, they do bump up the MSRP from $490 to $595.

Mossberg’s striker-fired pistols are somewhat unique with their Safe Takedown System that allows the user to remove the striker from the pistol before cleaning. This precludes the user from having to pull the trigger in order to remove the slide, thus making the process a little safer overall. Aside from the innovative takedown system, Mossberg is also on the leading edge with popular features like the flat-faced trigger on the MC2c, as well as the reversible magazine release.

What impressed me even more with the MC2c was how the company packed 13 rounds into a package just slightly smaller than the G48 MOS. While both have the same 1.1-inch width, the Mossberg is just a hair shorter in both length and height, yet the MC2c offers three additional rounds in the standard magazine.

For additional capacity, the second magazine that ships with the MC2c has an extended baseplate and holds 15 rounds. It should be noted, however, that the MC2c will not accept magazines from the Glock 43X or G48. The original MC1sc would work with Glock G43 magazines. But that ability to accept Glock magazines did not translate to the larger MC2c.

Best of Both Worlds

After getting to the range, and as is often the case when doing comparisons, I found myself wishing I could have a hybrid pistol of the best features from each. Mossberg did its homework with the ergonomics of the MC2c. The rounded and contoured grip was very comfortable to hold and the proprietary texturing locked the pistol down for excellent control during fire. For lack of a better way to describe it, the G48 MOS just felt a little generic in the hand and the texturing left a little to be desired.

Where the G48 MOS had a stark advantage was the trigger pull. While I preferred the flat-faced trigger on the MC2c, the pull itself was a little hinky. There was a distinct rubbing/dragging sensation near the end of the pull. Also, the trigger seemed to hang up just a bit near the end of the pull and then suddenly lurched back once enough pressure was applied. This made a slow, smooth trigger pull tricky while shooting for groups from a bench. However, this is the third Mossberg pistol I’ve tried and the other two did not have the trigger issues that this one exhibited.

Speaking of accuracy, both pistols performed fairly well with their groupings at 15 yards. Oddly enough, the best five-shot group I could get from each pistol was 1.75 inches—but with different ammunition. The G48 MOS seemed to prefer Sig Sauer’s 124-grain Elite V-Crown, while the MC2c’s favorite load was Federal’s 147-grain HST. Of course that can change from pistol to pistol, so the end user will need to figure out which load their pistol likes best.

To keep the comparison fair, I didn’t test the Glock with a red-dot installed. However, it’s worth noting that a red-dot would probably help tighten up the groups quite a bit since the combat sights aren’t exactly the best for target shooting, especially with my eyes. Also, the G48 MOS seemed to shoot the most consistently for all five shots. The Mossberg routinely turned in four shots under 1 inch with a fifth shot opening up the groups significantly.

While neither would be considered a marksman pistol, both shot more than accurately enough to fulfill their role as defensive pistols. Similarly, both pistols were extremely reliable as well, with no mechanical failure of any kind. While testing the two, my shooting buddy, Lincoln, and I both inadvertently activated the magazine release on the Mossberg with our grip during strings of fire. It happened once with me and several times with Lincoln. The end user might have to adjust his or her grip to avoid this issue.

While the G48 MOS had the advantage with the trigger, the MC2c definitely upped the ante with the higher capacity magazines. Glock falls a little short in this area, primarily due to its polymer magazine design. Thankfully, Shield Arms has come up with a solution with their S15 magazine. By using a thinner, metal magazine body, the S15 is able to house 15 rounds of 9mm ammunition in a standard magazine, putting the capacity on par with the Mossberg.

This gives the G43X/G48 user the same firepower of a G19 in a slender, single-stack profile. This is a very attractive add-on for G43X/G48 users, but it adds to the overall price of the package. The S15 magazines cost $40 to $44 each, and since metal magazines will wear out Glock’s polymer mag catch, it is recommended to install Shield Arms’ metal magazine release. This is an additional $27. Installation of the Shield Arms mag release is a breeze. After watching the video on the company’s website, I swapped out the factory release in under three minutes.

The good news is that the S15 magazines were absolutely superb. They ran just as reliably as the factory magazines, with no failures of any kind during my testing. The only downside I noticed was that after I installed the new magazine release, the Glock polymer magazines stopped dropping freely. The new S15 mags dropped cleanly and freely, but not the factory polymer magazines. So, if you’re going to swap out the release, get ready to commit to investing in several S15 magazines.

With very similar MSRPs, the G48 MOS and MS2c are state-of-the-art pistols that both deliver excellent reliability and good accuracy. At this price point, the Mossberg offers great ergos, tritium sights and higher-capacity magazines. The Glock weighs in with a nicer trigger and optics-ready slide. It also brings better aftermarket support if you want to dress it up bit.

It all comes down to your priorities and what features you favor most. The upside is that no matter what you’re looking for, you’re sure to find it available in today’s market. It’s just a matter of preference and style. But when things go sideways, either one will absolutely get the job done.

This article is from the March-April 2021 issue of Combat Handguns magazine. Grab your copy at OutdoorGroupStore.com.