Our favorite mockumentary self-defense expert, Master Ken, is back with another firearm-related defense video. This time Master Ken shows Active Self Protection’s John Correia how to stop a bullet with his bare hands. 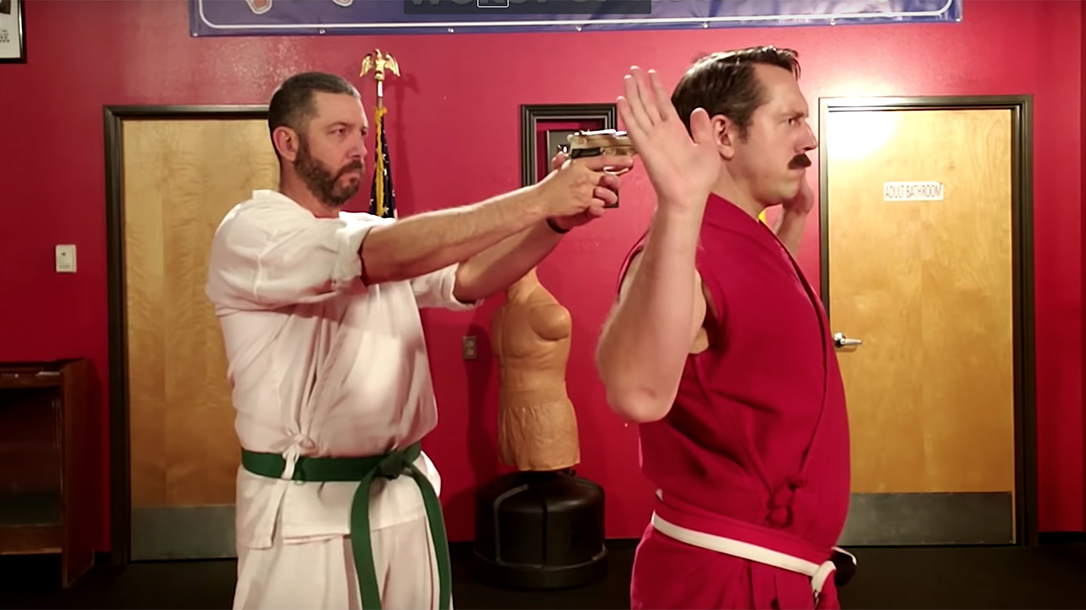 VIDEO: Master Ken Shows How to Smack a Pistol Away With a Headbutt

Master Ken Demos How to Stop a Bullet

In “How to Catch a Bullet,” Master Ken spends a day at C2 Tactical, on the range with Correia. He

But Master Ken disagrees, saying a proper application of technique, along with understanding science and physics. So while Correia points a CERT pistol, Master Ken explains his incredible defensive moves. After stepping a half-step back to gain more time, Master Ken directly aligns his body with the bore. He drops down to see down the barrel to get his eye on the bullet.

“I call it a combat clap,” Ken says, smacking his hands together. “I’m going to reach up, OK. I’m going to stop the rotation of the bullet with my hands, which is going to slow it down. Only then can I grasp the bullet and attempt to re-direct it.”

“No, it’s just because he’s not advanced, and he’s not fast enough to see,” Master Ken says to the camera.

Then Master Ken heads downrange and Corriea pulls his full-size carry-optics pistol. And Master Ken then proceeds to amaze, catching rounds that come hurling at him … well, sorta.

“Alright, so, that is how you catch a bullet. Remember, it’s important, stay in front of the weapon. Keep your eye on the bullet; combat clap and re-direct. So John, now that you’ve seen me demonstrate that, are you a believer?

“Uhh, I think if the bullet is doing 1,000 feet-per-second, and it’s just the bullet, it’s gonna be a little different than its the whole cartridge lobbed at you,” Corriea says.

And finally, both of our stars agree on one thing: don’t try this at home. Again, Master Ken constitutes a parody. For real training, seek a qualified professional.

VIDEO: Master Ken Shows How to Smack a Pistol Away With a Headbutt