The words came floating toward me from the next shooting lane as I placed the pistol on the table. I had just received the new Wilson Combat SIG P320 Carry EDC pistol, dubbed the WCP320, and had put five, not six, bullets downrange to get a feel for it. They did make a single large hole, and I was pleased by how easy it had been.

With that introduction to the new gun, I looked forward to running it hard during the next several days. During that time, more than 1,000 rounds cycled through the EDC pistol. Each seemed as accurate as the one before. For this reason, this professional defensive EDC pistol had me impressed.

Based on the popular Sig Sauer P320 pistol, the new Wilson Combat-Sig Sauer WCP320 Carry is a first-class 9mm defensive pistol. It combines the best work from both companies to deliver a pistol with a full-sized grip and carry-length barrel and slide. Many people consider this a “professional” gun because it can be easier to conceal than a full-length service pistol, but still gives you access to 17-round magazines.

One of the most apparent upgrades is the Wilson Combat P320 Carry II Module. This polymer grip module is available in both black and tan colors. It features the recognizable Wilson Combat pattern with aggressive stippling on the frontstrap and backstrap. My pistol sported the tan frame. To my eye, the color looked a touch lighter than the fashionable flat dark earth (FDE) and had no stray marks or pronounced weld lines.

Wilson Combat designed the grip module with a generous undercut. Because of the undercut, I was able to get a high grip on the pistol to better align my finger with the trigger. As a result, the high grip allows you greater control over recoil. A defensive pistol may need to fire multiple shots quickly, and you should be able to minimize muzzle flip to get them on target quickly.

A generously sized accessory rail is located at the forward end of the frame. The rail worked with several weapon lights I had on hand from Streamlight, Olight and SureFire. At the opposite end, the magazine well is flared at the mouth and beveled for fast reloads. So, the bevel design acts as a funnel to quickly catch and direct magazines home. The included magazines are standard Sig Sauer models with metal bodies. Against the polymer of the Wilson Combat grip module, the magazines slipped into place without a hint of friction.

Wilson Combat custom-machines unfinished Sig Sauer compact slides for this pistol. The slide receives the Wilson Combat X-Tac pattern cocking serrations and bevels before the black diamond-like carbon (DLC) finish is applied. On the right side of the slide, you will find an engraved Wilson Combat logo. The 3.9-inch barrel has a DLC finish as well.

DLC finishes are tough and durable. They resist wearing from sliding contact and offer good lubricity in the absence of a quality gun oil. Therefore, these features make DLC coatings excellent choices for handguns. However, the DLC finish is difficult to apply, so I am happy to see it on this pistol. The DLC finish provides a lifetime of wear resistance and enhances the visual appeal of the gun, no matter how much you shoot it.

On the top of the slide, the WCP320 Carry sports a red fiber-optic front sight with a Wilson Combat Battlesight on the rear. The Battlesight uses a deep U-notch to quickly find the front sight. Further, it has no dots or other markings to distract your eye from the front sight. The leading edge of the rear sight has a hard edge that makes it useful for one-handed slide manipulation.

With the standard WCP320, you get the Sig Sauer XFull trigger. The XFull is a flat-faced trigger that is said to offer better leverage for the finger. With improved leverage, the pull weight has a lighter feel. In the upgraded WCP320, Wilson Combat tunes the action using custom trigger parts from Grayguns. The Wilson Combat tuned action really enhances the already excellent XFull trigger.

The WCP320 should fit in any standard holster designed for the compact or carry-sized P320 pistol. DeSantis Gunhide shipped me a Speed Scabbard to try out. The Speed Scabbard is a leather outside-the-waistband (OWB) rig that works great as a strong-side concealment holster. The three belt slots in the holster allow you to adjust the cant of the gun. A tension screw ensures you get the right amount of retention.

I found the Speed Scabbard did an excellent job of pulling the gun close to my body. With the forward cant configuration, the full-length grip did not cause any noticeable bulges under a cover garment. While Kydex and other synthetic holsters are great options for a Wilson Combat pistol that looks this good, I like the classic look and feel of leather. DeSantis holsters have always served me well, and the Speed Scabbard is a perfect example of the quality I’ve come to expect from the company.

I’ve shot a lot of pistols, and the Wilson Combat-Sig Sauer WCP320 Carry is one of the most impressive defensive handguns I have fired in a long time. From the uncompromising reliability to the perfect fit in my hand, this gun delivers a phenomenal shooting experience.

Although I’ve had the gun for only two weeks, it’s been to the range three times and digested more than 1,000 rounds of ammunition. Other than an initial cleaning, I’ve not done anything special to maintain it. Based on the performance of my gun, I’d say these pistols meet my expectations of reliability.

While reliability is a non-negotiable attribute for any self-defense pistol, there are many other characteristics that can make a gun a superior choice. One crucial trait is accuracy—something at which the WCP320 Carry excelled right out of the box. The first string of five shots was impressive, but the real story was the gun’s precision with many different loads.

I tested more than a dozen different loads in the gun, and all were seriously accurate and precise. I shot a mix of brands, bullet weights, bullet designs and velocities. Wilson Combat included a sampling of its custom loads for me to try with the pistol. Like other factory loads, this ammo ran with complete reliability in the WCP320 Carry.

One of the Wilson Combat loads was the Pinnacle 124-grain +P JHP. This round uses the very effective Speer Gold Dot bullet. While there are no magic bullets, I’ve seen the Gold Dot perform its duty enough to trust it. It was also plenty accurate in my testing—less than 1.0 inch at 7 yards.

From an accuracy standpoint, the 135-grain jacketed HBFN load was outstanding. Using a Berry’s Manufacturing bullet, this load was a very mild shooter and made single-hole groups string after string. My best group was less than 0.7 inch from edge to edge. This ammunition would be my first choice for any accuracy match.

While the theoretical accuracy of this gun is beyond what I can shoot freehand, the quality of the ergonomics makes precision shots possible. The grip fills my hand perfectly, the sights are crisp with a bright front sight and the trigger is exemplary. These distinguishing elements make it easy to put the shots where they need to go.

Throughout my testing of the WCP320, I picked up the front sight quickly from both the draw and the low ready positions. In nearly all lighting conditions, the fiber-optic sight is bright and draws the eye into it. The space in the rear sight notch is generous and allows for rapid alignment.

The WCP320 Carry is a perfect blend of Sig Sauer and Wilson Combat craftsmanship. In its basic trim, the gun offers incredible accuracy and reliability, with a superb new grip frame. The action-tuned version of the pistol incorporates additional Wilson Combat work into the trigger pull for a further refined experience.

For the most part, I see polymer-framed, striker-fired pistols as being work guns. These are the pistols you use for self-defense thanks to their reliability, not their elegance in form. However, Wilson Combat brings incredible style and handling characteristics to the P320 platform.

The Wilson Combat SIG P320 is a top-shelf firearm and worth your consideration as a defensive shooter. Find out more, visit wilsncombat.com.

This article was originally published in the Personal Defense World Feb/March 2021 issue. Subscription is available in print and digital editions at OutdoorGroupStore.com. Or call 1-800-284-5668, or email subscriptions@athlonmediagroup.com. 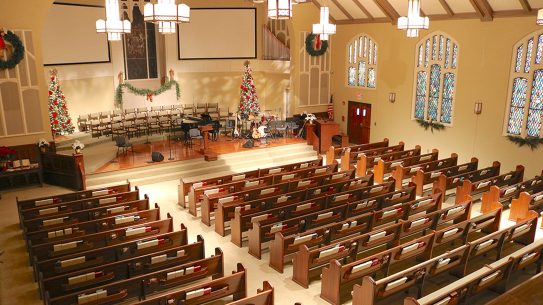 Expanding the rights of citizens to carry in more locations and situations, the Florida...