One of the hottest carry pistols to hit the market in the past couple of years was Sig Sauer’s P365. The popularity of the P365 extend to the slightly larger and higher capacity P365XL. With its revolutionary magazine design, the P365 was essentially built around the magazine to be a high-capacity, micro-compact pistol that was just as easy to carry as it was to shoot. With solid ergonomics, a good sight package and excellent-for-size controls (not to mention the 10+1 capacity) the P365 series has proven to be extremely popular with concealed carriers. The only thing better than a P365XL is a custom P365XL, from Zev Technologies. 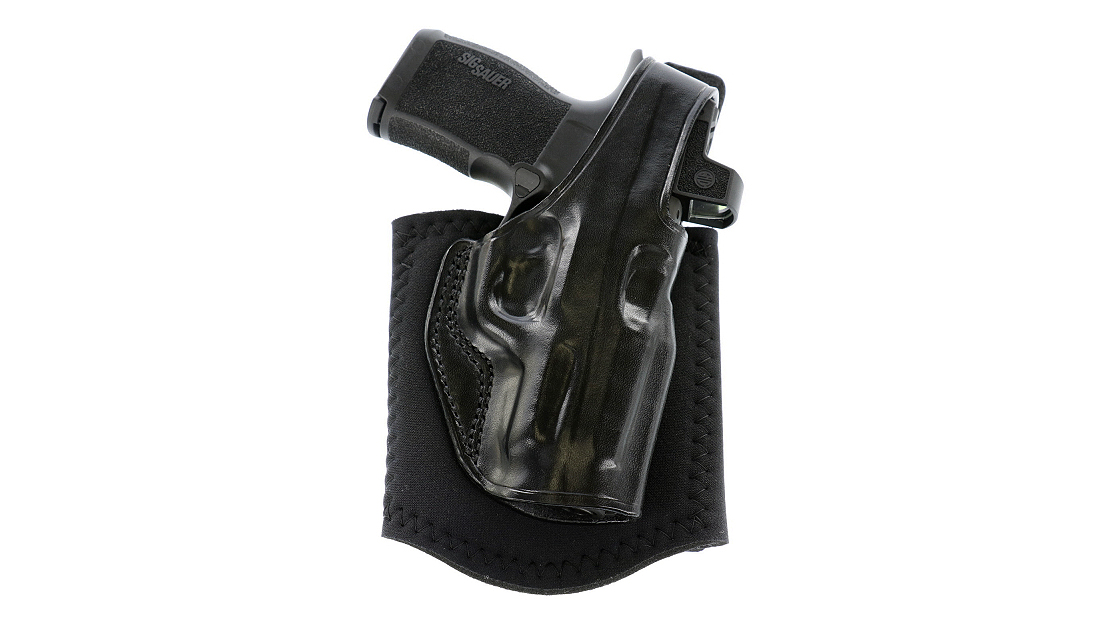 As good as those pistols are, and as with all other things, there was still space for improvement. The folks at Zev Technologies make their living by setting up shop in that kind of space. They make it their business to tweak aesthetics, improve ergonomics and fine-tune overall performance. Zev Technologies originally cut their teeth on the Glock Platform. So it made sense to offer their custom touches to Sig’s various polymer-framed offerings.

Having already produced the crowd-pleasing Z320 XCompact Octane, Zev Technologies recently turned their attention and expertise to the P365 platform. In the wake of this new work, I recently received Zev’s new Z365XL Octane for review. To be honest, I was more surprised than I anticipated.

Well known for high-end aftermarket triggers, Zev Technologies has plenty of other tricks up its sleeve. The Z365XL Octane is essentially a factory-new Sig P365XL that Zev Tech modifies before selling it to the end user. Zev’s Octane version of the P365XL includes a little custom work and a couple of aftermarket parts to squeeze out that last bit of performance and utility from the P365XL.

Most notably, at least from a visual perspective, Zev’s offering includes a custom-machined Octane slide. Featuring a combination of vertical rear serrations and diagonal forward serrations, the Z365XL Octane’s slide offers excellent traction for easy manipulation, and it looks good, too. In that vein, the slide also incorporates full-length beveling and top serrations. They not only offer additional eye candy but help reduce glare as well.

The showcase feature of the Octane slide is the optics-mount cut that is staged to receive a Shield RMSc, Sig Romeo Zero or Holosun HS407K micro red-dot sight. Now, the factory Sig P365XL has a slide milled for an optic, so what’s the big deal, right? If you’ll look closely, you’ll see that Sig’s cover plate includes the rear sight. So, when you decide to install an optic, the rear sight disappears.

That’s not the case with the Z365XL Octane’s slide. In addition to the fiber-optic front sight, the slide includes a blacked-out and serrated rear sight. The rear sight stays in place even with an optic installed. If the optic’s battery dies or the unit becomes damaged, the user still has a full sight set for co-witnessing. This is no small thing in a defensive pistol. Throw in the titanium gray finish and you’ve not only got a more functional slide set-up, but one that’s arguably much better looking than the original, as well.

The next modification is probably the one that impressed me the most since I can take or leave red-dot sights on a pistol this small. The first substantive observation I made about the Z365XL Octane was when I pulled it out the first time. BOOM! The connection with ZEV’s Diamond Pattern laser stippling was instantaneous and very gratifying. It is just outstanding in comparison to the texturing done on a standard P365 or P365XL. I speak with authority since I own a factory version and have reviewed several variants in the recent past.

The last custom component thrown into the mix is Zev Tech’s proprietary Zev Pro barrel. Including its own decorative touches like angular machine cuts and dimpling for a bit of flair, the Zev Pro barrel sports a hardy, black DLC finish for excellent wear and corrosion resistance. Aside from these mods, the P365XL receives no other work.

Factory controls like the takedown lever and slide stop are left as is. Also remaining, are the flat-faced, factory trigger and internal components, and the pistol still ships with two 12-round magazines.

To take advantage of the Z365XL Octane’s capabilities, I reached out to the folks at Shield Sights for a little help with this review. Because of their smaller size, Shield Sights’ RDOs are ideal for micro-compact pistols like the Z365XL Octane. This is especially true when bearing in mind the fixed rear sight. After a little discussion, we settled on the fairly new RMSw red-dot optic.

Like the new RMS2, the RMSw does not have the battery drawer found on the original RMS. Instead, you install the battery from underneath the unit. This allows for a more robust frame construction that holds up better to the knocks and bangs of everyday carry. Additionally, the RMSw ships with a gasket that, when properly installed, makes the unit waterproof down to a depth of 20 meters for 30 minutes. The RMSw is also the company’s first red-dot with a hard-coated polymer lens that should help it hold up even better during daily use.

The RMSw’s slim form factor comes from its lack of buttons and its automated nature. The LED’s brightness adjusts automatically by the unit’s circuitry, depending on the ambient light levels. One 2032 battery has an estimated life of 2 to 3 years. But you can extend that significantly with the dark-storage cap that slides over the unit when not in use.

The RMSw comes with either a 4- or 8-MOA red dot. I wanted the most precise aiming point possible, so I went with the 4-MOA version. Installation was quick and easy with the included instructions. It’s basically a plug-and-play affair without having to make manual brightness adjustments. The unit’s housing is made from aluminum and has a footprint of 42x23x22mm. It weighs only 17.5 grams with the battery. All in all, the RMSw packs a lot of utility for its small size and extra-light weight.

Of course, all the extra mods and add-ons don’t mean much if they can’t deliver the goods. So my shooting buddy, Lincoln, and I hit the range with the Z365XL Octane post haste. The first thing he said when he pulled the pistol out of the box was, “Man, that feels good.” He wasn’t wrong. I never really had a complaint about the texturing on my personal P365 until I felt the stippling job on the Z365XL Octane.

Wrapping around the entire circumference of the grip, the diamond-pattern texturing is just coarse enough to lock in your hand for that extra-confident purchase without being abrasive. I can’t say that it definitively improved the purchase on the pistol, but it felt like it did. That translated to more confident handling and shooting. Now that I’ve tried it, I’ll never be satisfied with my personal P365 until I have the fine folks at Zev give it the full treatment.

The Difference of a Red Dot

Assisting with that extra confidence was Shield’s RMSw red-dot. For such a compact unit, it provided a good field of view, and the ambient light sensor did a great job with automatically adjusting the LDS brightness. The red dot was sharp and bright, providing easy tracking as we took on a steel plate rack and a couple of dueling trees. While the housing might not be quite as robust as that of an RMR, the thinner frame made the window not seem so claustrophobic when viewing the dot.

I got lucky with the mounting of the RMSw, as it was only about 1 inch off the target at 7 yards. This is the distance we test pistols with barrels under 4 inches. There’s no question the red-dot makes it easier to get a precise aim than with trying to align iron sights.

With three different brands and weights of ammunition, including a +P load, all five-shot groups were under 1 inch from the bench. Sig Sauer’s 115-grain 365 ammunition, designed for micro-compact pistols, took the blue ribbon for an average group size of 0.63 inches and a best group of 0.56 inches. However, it only just narrowly edged out Wilson Combat’s 115-grain +P XTP load with its average group of 0.74 inches. The Zev Pro barrel was definitely on the money with regard to accuracy.

Even so, I think the accuracy could have been a bit better if it weren’t for the factory trigger. It wasn’t bad, but when I was doing a slow press during accuracy testing, the trigger kept rubbing, catching and then lurching a bit as I slowly overcame resistance.

Having the rear sight in place while the red-dot is mounted is a definite bonus. Zev did a good job with maximizing the real estate on the P365XL’s slide to make it happen. One thing I noticed, though, was that the combination of the front and rear sight was just barely tall enough to see through the red-dot window with a little bit of searching.

It would’ve been nice if the iron sight package were a few tenths of an inch taller for easier visibility. However, you could then increase the chances of snagging on clothing and possibly interfering with the sight picture, depending on how the red-dot is aligned in relation to the front sight for a particular load. Everything’s a compromise or a trade-off when working with a smaller platform like the P365XL.

The good news is there was no trade-off when it came to reliability with Zev Technologies’ slide and barrel installed. Aside from the premium loads, we shot an assortment of FMJ ammunition from Winchester, Sig Sauer and Black Hills. There were no bobbles or malfunctions at all.

With great looks, excellent texturing, and superb accuracy and reliability, there’s nothing to dislike about the Z365XL Octane—almost. The MSRP on the micro-compact fighting pistol is $1,299, putting it at almost double the price of the factory P365XL.

Is it worth it? Well, that’s up to you and your priorities. Aside from the improved overall appearance of the slide and barrel, you do get enhanced ergos and functionality with the stippling job and the capacity for a rear sight with a red-dot mounted. Sure, you get the fiber-optic sight up front, but I’m already a fan of Sig’s Xray-3 day/night front sight, especially for low-light use.

Zev Technologies also offers a similar package with the standard-sized Z365 Octane. I would argue the case is more compelling for it since Sig Sauer doesn’t currently offer a red-dot capable slide for the regular P365.

I’m impressed with the Z365XL Octane and don’t mind paying extra for the bling and a bit of added swagger. Especially when that bling improves overall utility.

This article was originally published in the Combat Handguns July/Aug 2021 issue. Subscription is available in print and digital editions at OutdoorGroupStore.com. Or call 1-800-284-5668, or email subscriptions@athlonmediagroup.com.