by Waysun Johnny Tsai
in Gear, Knives, Skills / How To
0

The author uses a wrapped jacket around his arm to protect himself from being cut. He uses a fighting stick as an equalizer for knife defense.

I remember the first time someone tried to stab me with a knife, it was my first knife defense situation. It was when I was about 16 years old, skateboarding at the local train station with about four or five friends. I was skating past an escalator as a middle-aged man was walking towards me. He bumped into me and I felt his hand hit my stomach and slide across my midsection. So, I grabbed my stomach to check myself and spun around to see him facing me—holding a knife. 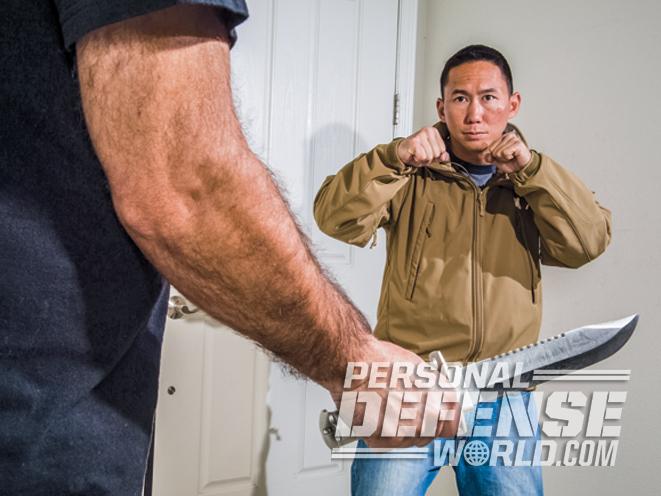 Knife Attacks Happen Fast, Your Defense Should Too

Lucky for me, I was wearing a thick leather motorcycle jacket, and as a result I think the zipper or buttons kept me from getting slashed. I yelled, “That MF’er just tried to stab me!” So, my friends and I picked up our skateboards to beat him senseless with them. But he took off and ran up the escalator to safety. We didn’t chase him; we just stood there stunned in a true “holy shit” moment.

Over the years, I have trained in knife defense and successfully stopped knife-wielding attackers without receiving a cut on more than one occasion. In fact, I say that my success stems from a combination of skill, mindset and downright luck.

In this issue, it was my desire to demonstrate some basic knife-defense techniques and gather a roundtable of highly skilled and experienced professionals to discuss the mindset required to survive a knife attack. What they shared may surprise you. So, here we go. The truth about knife defense, mindset and regurgitated nonsense.

Gentlemen, thank you so much for taking time out to discuss knife defensive tactics. Please introduce yourself, your background and why our readers should listen to what you have to say.

JEFF: My name is Jeff Patterson. I’ve been a police officer for 22 years. I’m the lead defensive tactics instructor for my agency and am considered a use-of-force subject matter expert.

AARON: My name is Aaron Murauskas. I have 17 years’ experience working in law enforcement and the security sector in a variety of capacities. I’m a master instructor in defensive and small-unit tactics with 25 years’ experience in combatives and martial arts.

BOB: My name is Bob Schirmer. I’ve been a lifelong martial artist training in boxing, wrestling, judo and taekwondo. I was a Recon Marine and now teach close combat at my MMA gym, Combat-Do. I also became a tactical operations police officer.

NIK: My name is Nik Farooqui, and I am the CEO/director of training operations for S2 Strategic Defense. I’ve been involved with martial arts my entire life, specializing in edged weapons for over 20 years, and have owned multiple training academies.

In my 25 years working various levels of private security jobs, I’ve taken down an attacker wielding a knife without taking a cut at least once. Have you?

JEFF: Most of my edged-weapon experience has been with broken bottles.

NIK: I’ve had incidental contact with the blade and technically have been cut, but it was not of any significance. In other instances, I was able to avoid receiving a cut.

AARON: I’ve taken down attackers with edged weapons. This was a focus for me as I was once cut, albeit small, while intervening during a large bar fight. It made me recognize the importance of learning defensive tactics to prevent this from happening again.

BOB: Yes, I have successfully taken knives away from felons while undercover and once while off duty.

Why do you think instructors teach their students they should “expect to get cut” or, “will get cut,” in a knife fight?

BOB: I would never tell my students that they will get cut. I will stress the importance of drill, drill and drill.

NIK: I think the intended meaning is that there’s no guarantee that you will or will not get cut. Unfortunately, it became a cliché statement, like “train like you fight.”

AARON: I think that it’s a training paradigm that helps on two primary levels: First, it sets a tone and expectation, which should help reduce fear about intervening or protecting yourself. I think, after that, at least in a law enforcement environment, it helps the trainee to further understand the use-of-force model and appropriate escalation.

JEFF: I believe the common reason is that if you get cut during a knife fight and you didn’t think it could happen, then you may become mentally irrational. If you expect to get cut, and you get cut, you’re not surprised and can keep going.

I mean, you might take a punch in the face during a fight, but it doesn’t mean that you will. Have you ever stopped a bad guy and taken him down without taking a punch to the face because you refused to let him hit you?

JEFF: I can honestly say that I’ve taken down many subjects without getting hit at all. I tend to believe that the primary reason I’ve been successful is the ability to know when to engage and then not hesitating—“striking first” with speed, surprise and violence of action.

BOB: Yes, both on and off the job.

Isn’t that pretty much the same mindset? Meaning, “I might get cut, but that bad guy is going to work extremely hard to make that happen.”

In three sentences or fewer, tell about a time you stopped a knife-wielding attacker without taking a cut.

NIK: Immobilize the limb that’s swinging the knife, inflict high levels of pain while locking that limb out and then follow up with some kind of manipulation or putting the attacker down.

BOB: Using physics and the principles of science in fighting, I was able to arm-drag an offender down without him cutting me.

JEFF: My experience has fallen into the bar/bouncing arena with broken bottles. Most situations didn’t end in an intentional takedown but rather a kick that would create the opportunity to strike.

AARON: Hard hip check to displace the balance of the subject, checked the arm and hand with the knife and used a trained technique to bring the subject to the ground. I had positive control of the “threat” the entire time.

I also think that telling a person to run when they see a knife is bad advice. Create distance, find a barrier, yes, but run? No. If a guy with a knife chases you and catches you, now you may have to fight him winded. I’d rather fight fresh. Thoughts?

NIK: He who runs dies tired. What will you do when you cannot run?

AARON: I like the term “tactical retreat”—but yes, you are correct: Movement is key, and that movement should be to a newly established fighting position and should provide some discretionary time to escalate force or action-plan your next steps.

I feel that everyone should have some kind of weapon at all times—on their person, in their vehicle, etc. Many items can prevent taking a cut in a fight. Name one.

JEFF: 100-percent agreed. I’ve had a thought that the body can be divided up into three areas: top, middle and bottom. You should have a weapon stored, probably a knife, on all three parts.

NIK: Pepper spray is a great choice for the everyday individual without training.

AARON: A concealed and accessible firearm is the obvious answer on this, but let me give you another. I keep a small bag—a backpack—with me at all times, so I can create a barrier during a physical encounter if needed.

Knives are common in both public and private spaces, so people should train and learn to defend against them. So, I recommend learning defensive tactics against edged weapons. Don’t try to become a “knife fighter,” as 99 percent of instructors don’t go out and get into knife fights. You have to be in a profession that requires you to get into gunfights to say that you’re a gunfighter. Same rules apply, right?

JEFF: I’m reading a book that basically says the same thing. How many gun/knife fights do you have to be in—and survive—to be considered an expert?

NIK: Don’t get wrapped around the axle with “gunfighter,” “knife fighter,” “ground fighter,” etc. Either you’re a fighter who’s willing and able, or you’re not. I’m not a gunfighter or a knife fighter; I’m a fighter that has a firearm, a knife and hands-on skills alike.

AARON: My thoughts have always been that there’s an expectation that my involvement in a physical encounter or gunfight is a real possibility, I must look at myself as being a “fighter” when required.

BOB: Just be a fighter.

NIK: For anyone who wants to learn to protect themselves, train for your lifestyle first. We are not all cops or special operations soldiers.

AARON: My closing thought would be to the readers: Find time, make time and learn skills that will help you and those that you care for during a critical incident. We cannot depend on someone else to intervene; this is a task order that we must take responsibility on.

This article was originally published in the Survivor’s Edge Spring 2021 issue. Subscription is available in print and digital editions at OutdoorGroupStore.com. Or call 1-800-284-5668, or email subscriptions@athlonmediagroup.com.