by Fred Mastison
in Skills / How To
0

The mastery of firearms comes in several stages. First, you simply manage the actual function of the gun. You follow this by developing an ability to hit your target consistently. Next comes an ability to draw your pistol or get your rifle into action quickly. These are essential building blocks of combat shooting and tactics. 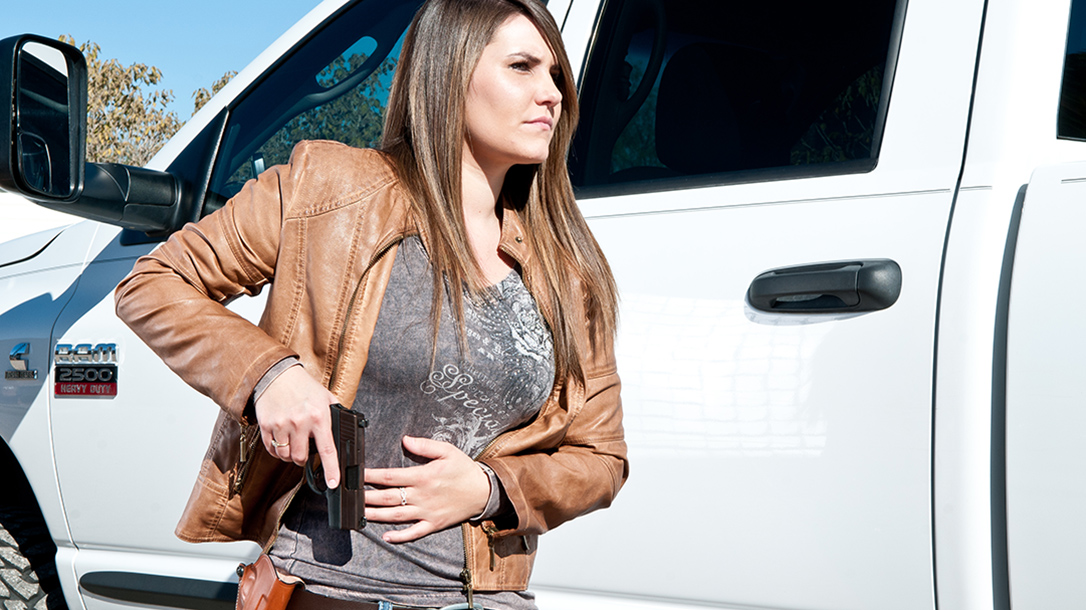 The Essentials of Combat Shooting and Tactics

It is at this point that people training with firearms for defensive purposes must make the jump to gunfighting. This is a major step because a vast majority of it is in the mind. You must begin to understand tactics and how violent encounters work. On the practical physical side, it is essential that you master the ability of moving and shooting.

The ability to shoot accurately and move is a distinguishing characteristic in a gunfighter. The benefits of this skill are countless, but several major points stand out.

The first is that moving can disorient your attacker. For this we need to get an understanding of the “observe–orient–decide–act” (OODA) loop. Air Force Col. John Boyd, the legendary military strategist, developed this concept. OODA breaks down the decision-making process.

Boyd explained that if a shooter can process this cycle quickly—observing and reacting to unfolding events more rapidly than an opponent—they can “get inside” the opponent’s decision cycle and gain the advantage. This is not a one-time decision, but rather a fluid one.

All decisions are based on observations of the evolving situation, tempered with implicit filtering of the problem being addressed. You must process the observed information to orient it for decision making. Understand that the OODA loop concept involves drastically more depth than we can explore in this article. Its genius is worthy of deep study. But for the sake of time, we will break it down here.

The OODA Loop Broken Down

First, you observe what is going on. You will make subsequent decisions from this basic information. This is a critical reminder that you need to be aware of your surroundings. Scan the people around you, look for secondary exits and plug in to anything that could be a threat.

The second part of the process is orientation. As mentioned, the OODA loop is a deep and complicated creature, and this part of the cycle demonstrates that. According to Boyd, there is a “filtering of the information through our culture, genetics, ability to analyze and synthesize and previous experience.”

What that means is that your experiences and training will be crucial in establishing your orientation. For example, if you were a pampered and unaware pacifist who did not believe evil could happen to you, your orientation would be different than that of someone trained to fight when confronted with violence.

From that point we must now decide. This is where training and a prepared mind become critical. You must now decide among all the alternatives generated in the orientation phase. In short, you can look at this phase as “Not what?”

Putting it in Action

The last phase is to act. Boyd actually calls this section “test” as well, in that you will be testing your response. If your response is correct, you win the battle. If it is not, you start the OODA loop again using your newly observed data. This is the cycle that we should master because it is an underlying truth in life.

Whether in combat or freeway driving, you use the OODA loop in your daily life. When you apply the OODA loop to moving and shooting, you should operate at a faster tempo or rhythm than your adversary. This allows you to get “inside” the opponent’s OODA loop and generate confusion and disorder. Opponents must reorient themselves to the now-moving target they once thought would be easy prey.

Moving and shooting should not be relegated to just left/right or front/back movements. The idea of “stepping off the line” has been a martial concept for millennia. In many cases, stepping off at a 45-degree angle works well. This is very effective when an assailant is in close proximity and quickly closing on you. Like a matador, you must step off the line as the bull rushes by. There may also be times when stepping off the line and going to a knee may be appropriate.

All these choices will be driven by the assailant you are facing. Remember that they have decided to attack you because they feel they can win. Their OODA loop has told them that they will dominate you if they do XYZ. Your movement will upset their psychological apple cart and force them to figure out how to respond. Another great benefit of mastering shooting on the move is that it makes you a hard target.

Chances are that Johnny McCrackhead has not done a lot of serious firearms training, if any. His ballistic abilities will be limited to shooting at a static object, normally from a static position. In short, he will suck at shooting. Do not take too much solace in this, however, because it does not take a trained marksman to shoot you from 2 feet away. This is demonstrated night after night in violent cities such as Chicago and Detroit. It does give us a skill-based advantage, though, that we need to leverage.

Accessing Your Weapon on the Move

In terms of technique, the fastest and most effective way to get yourself into the fight is to draw your weapon as you are moving. This is the combination of two motions, but both can be executed easily at the same time. A good drill for this is to stand about 3 yards from the target.

On the “go” command, index your pistol as you are stepping back with your strong-side foot at 45 degrees from the target. By the time your foot plants and is solid, you should have cleared your holster and have the gun parallel with the ground and the muzzle on the target. This is a close-quarters shooting position, where the gun is essentially at your hip and being managed by your shooting hand alone.

Should the need arise, you are capable of putting rounds on target in this position. Accuracy will obviously suffer, but it will give you the opportunity to continue your motion and get more distance. Continue the drill by sliding back yet another step and finishing your pistol presentation. As you are doing this, fire a number of rounds into the center-mass of the target.

Work this drill both on the right and the left. Small modifications to this drill will have you stepping directly to the right, to the left, as well as backward and forward. Yes, there may be a time when it is essential that you close the distance with an attacker.

Much has been made of how we should step while shooting. Some suggest that you use a heel/toe walk, or that you squat and do a “Groucho” walk. In my experience these can be simplified by stating this: Move as if there is a book on your head and you do not want it to fall off. You will naturally adapt to that thought, and in so doing you will slightly lower your hips and glide with your feet.

Something else I want to address is the perception that your front sight will be moving a great deal. Yes, it will be moving more than it would if you were static, but do not let your brain have a panic attack over this. The reality is that if you walk smoothly, your sights, while still moving, will still be on the center-mass portion of your target. You will not be shooting a dime-sized group, but you will still be putting rounds on center-mass.

A good drill for this is to get about 15 yards from your target. Present your weapon and begin to glide toward the target. Fire shots when you feel you are ready and continue until you are about 3 yards away. Now get a fresh magazine in and repeat the drill, but this time moving backward. Make sure to almost slide your feet when you do this, to avoid stepping on something and taking a spill.

You can also do this going from left to right and then from right to left. The only thing I discourage you from doing is crossing your feet while moving. You can easily get bound up in your own movement and end up on the ground.

The last drill I will talk about is stepping back and then going to a knee. A general application of this is when there is a deadly threat in front of you, but the area behind the opponent makes it unsafe to fire. Whether it’s a group of innocent people or something else, you need to embrace the safety principle of “know your target—foreground and background.” This one will use the 45-degree step just for simplicity.

Once again, index your weapon as you step back at 45 degrees. Your pistol is now out and ready. From this point, you will collapse the strong-side leg and move down to a knee. While this is occurring, you are finishing our presentation. You are now able to shoot upward at an angle and engage the target without endangering the innocents behind the opponent.

Shooting and moving is a gunfighter’s skill and worthy of study and practice. Your instinct will be to move if someone starts shooting at you, and having the ability to do so effectively can help you win the day.

This article was originally published in the Personal Defense World Aug/Sept 2021 issue. Subscription is available in print and digital editions at OutdoorGroupStore.com. Or call 1-800-284-5668, or email subscriptions@athlonmediagroup.com.