Gun ownership is rising and the appetite for gun control is waning at the same time. Background checks for gun sales topped 21 million in 2020, shattering previous records. So far, 2021 has seen over 12.4 million background checks, on pace for what could be the second strongest year on record. 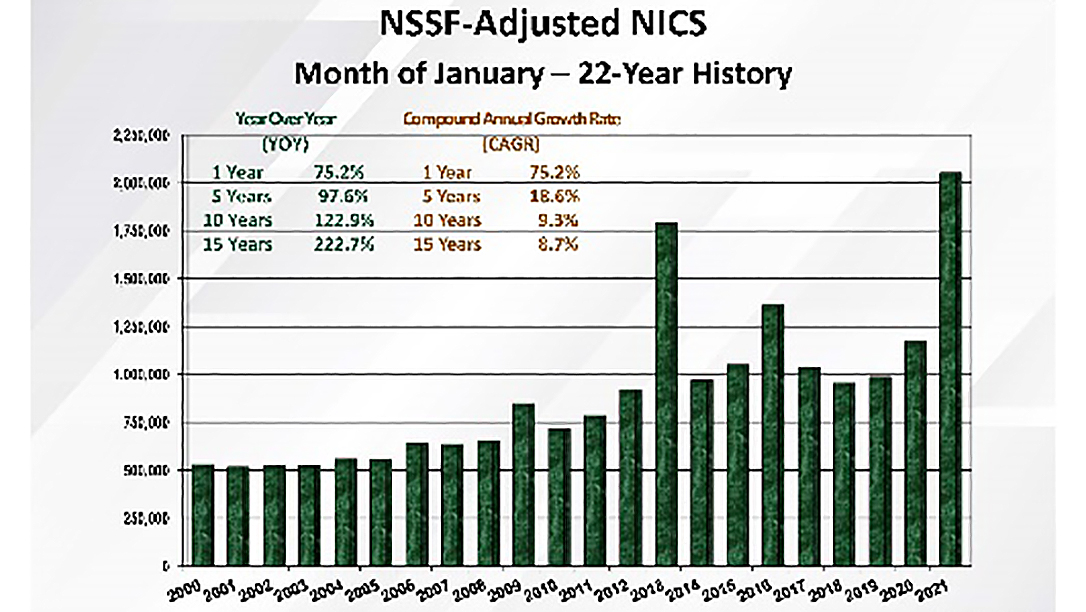 Those figures are punctuated by skyrocketing numbers of first-time gun buyers. NSSF retailer surveys last year indicated that as much as 40 percent of gun sales went to those purchasing their first firearm, or 8.4 million in 2020. Another survey released just last week by NSSF delved into gun sales in 2021, and as much as 33.2 percent, or 3.2 million people, bought a gun for the very first time in the first six months of 2021.

Even Pew Research Center recognized the trends. Pew’s latest gun surveys show firearm ownership is remaining steady with 40 percent of American households reporting a firearm in the home, including 30 percent who report personally owning a firearm. Still, there’s reason to be cautious of these anonymous surveys.

The firearm industry believes these figures might be underreported. Many gun owners self-select out of these anonymous surveys for concerns of privacy or being targeted for harassment or even crime. Firearm ownership is an intensely personal right and firearms owners have valid concerns that speaking openly if firearm ownership could expose them to ostracizing protests like being doxed. Newspapers have published names and addresses of concealed carry permit holders and politicians continually call for national gun registries. It is understandable that gun owners are reluctant to self-report the guns locked in their safes.

Pew’s findings about the reasons for gun ownership match what NSSF uncovered. Most people are buying guns for personal protection. NSSF found the same results in the 2020 retail surveys. More than half the firearms sold in any typical year are handguns and that held true during the record-breaking 2020 buying surge. Handgun use primarily occurs for two purposes, with some minor exceptions.

Handguns excel as firearms used for protection in the home or for concealed carry use. The other purpose is recreational target shooting. These aren’t the types of firearms that are commonly used for hunting. There are exceptions for big and small game handgun hunters, but those are the minority. Handguns would obviously perform poorly when used for bird hunting. Numbers reported for people buying firearms for personal safety correlates to the number of handguns sold nationally.

As Americans are taking ownership of their Second Amendment rights, the appetite for stricter gun control is fading. Pew Research Center referenced an April survey that showed 53 percent of those surveyed wanted stricter gun controls. That’s down from the high of 60 percent, recorded in the wake of tragic murders in Parkland, Fla. Pew also reported that 48 percent of Americans viewed “gun violence” as a very big problem, which also underscores why record numbers of Americans are buying firearms for protection.

Pew’s surveys also show Americans remain split over the idea stricter gun control would reduce the tragic mass murder events that have rocked the nation. Further examination only makes that data more understandable. The first crime committed by the Newtown, Conn., murder took place when he stole his mother’s firearm. Then he murdered her as she slept before continuing his heinous acts. The accused murderer in Parkland had multiple police interactions, including an instance when he allegedly put a gun to mother’s head.

That alone would have made him a prohibited individual. The school and even the FBI received warnings he posed a threat, and the FBI later admitted it failed to act on a tip. Law prohibited the Sutherland Springs, Texas murderer from possessing a firearm. Three factors barred his firearm possession, including dishonorable discharge from the U.S. Air Force. A military court-martial convicted him of domestic violence. Finally, spent time in a mental health facility, involuntarily committed. Like Parkland, authorities failed to properly act. His criminal and mentally-disqualifying records failed to reach to the FBI.

These glaring examples show where more laws failed to provide the answer. Instead, we needed better enforcement of the existing laws. The failure of law enforcement and military authorities to act remain glaring failures, resulting in tragic murders.

That’s why the firearm industry promotes Real Solutions. Including changes to state and federal laws, the FixNICS initiative ensure all disqualifying records submit to prevent illegal gun transfers. The initiative helps keep guns out of the wrong hands.

These attitudes are more commonly shared today. Gun ownership is growing and Americans are increasingly demanding laws that protect their rights and hold criminals responsible.