by Richard Mann
in Guns, Rifles
0

Lots of neophytes and even tactical gurus proclaim the shotgun as the best home-defense weapon. Shotguns are certainly lethal at close range, but they kick hard, making them uncomfortable to shoot. This is not so with AR platforms for home defense, like the Wilson Combat Protector series. 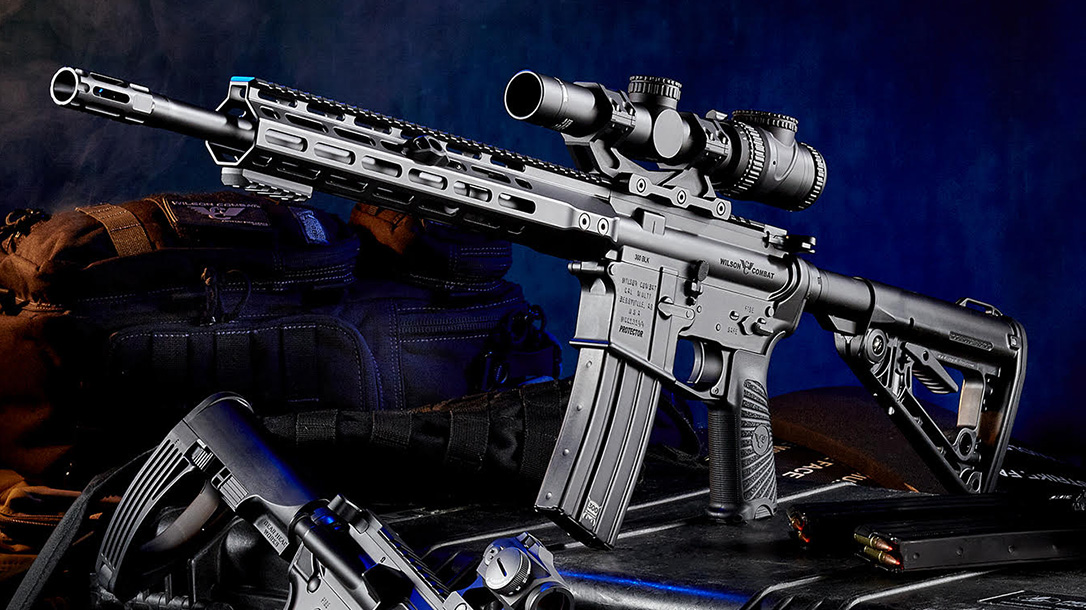 I own a few shotguns because I like to hunt crows and sometimes shoot things out of the sky. But when it comes to personal protection at home, I prefer an AR-style carbine. Sure, I have a handgun within reach at all times. But as the saying goes, the purpose of a handgun is to get to your rifle.

Not long ago, I had an opportunity to conduct some extensive testing of the new .300 HAM’R cartridge from Wilson Combat. Because it duplicates the external ballistics of the .30-30 Winchester, and since Wilson Combat offers a wide array of loads for it—suitable for everything from coyotes to elk and even bad guys—I got to thinking that an AR chambered for this cartridge would be an ideal home-defense weapon. Then Wilson Combat released its new Protector series carbines and pistols. So, I thought I’d see if either or both would fit my needs.

The new Wilson Combat Protector series includes a carbine with a 16-inch barrel and a pistol with an 11.3-inch barrel. Both are built on mil-spec forged receivers and retail for quite a bit less than the billet ARs for which Wilson Combat has become so famous. This does not mean that these guns play second fiddle to anything.

The Protector Carbines are available in 5.56mm NATO with a 1-in-8-inch twist rate, in 300 Blackout with a 1-in-7-inch twist rate and in .300 HAM’R with a 1-in-15-inch twist rate. They’re all direct-impingement builds with mid-length gas systems for the 5.56mm and .300 HAM’R models, and a pistol-length system on the 300 Blackout. The average weight—unloaded and without an optic—is just over 6 pounds. As well, Wilson includes a collapsible Rogers Super-Stoc as well as a BCM Gunfighter pistol grip.

The Protector Pistols are available in the same chamberings with the same twist rates. The 5.56mm and .300 HAM’R model rely on the carbine-length gas systems while the 300 Blackout version uses a pistol-length gas system.

Unloaded and without optics, the Protector Pistol weighs about 5.63 pounds and comes standard with an adjustable Gear Head Works Tailhook Mod 2 brace as well as a BCM pistol grip. So, it’s essentially the same gun as the Protector Carbine, but configured as a pistol with a shorter barrel.

I feel that testing firearms of this nature from a benchrest is mostly pointless. If they’re used as intended for personal protection, engagement distances will be short. And just about any AR-15 carbine or pistol will print sub-2-MOA groups at rock-throwing distances.

However, these aren’t just any carbines or pistols—both have retail prices of around $2,000. If you’re going to spend that much money on any gun, you should expect it to shoot well. To that end, both of my test .300 HAM’R guns shot just fine.

I mounted a Meopta 1-6x24mm MeoStar R2 riflescope with an illuminated 4C reticle on the carbine and tested it at 100 yards from sandbags. Wilson Combat’s 110-grain Lehigh Defense Controlled Chaos and 150-grain Hornady SST loads averaged just a bit over 1 MOA for five 5-shot groups, which is definitely better than average for an AR.

The Protector Pistol was fitted with a Meopta MeoSight III and tested from sandbags at 50 yards. (I just don’t have the eyes to push a red-dot sight to 100 yards.) Again, I fired five 5-shot groups with the same loads, and the average for all 10 groups was 1.44 inches.

With either load, both guns are capable of headshots in any defensive situation. For those who might want to get double duty from their home-defense weapon, the Protector Carbine is capable of fine precision out to the ballistic limits of the .300 HAM’R.

As a side note, Wilson Combat also supplied me with a carbine upper in .223 Remington. I mounted a 4-12X riflescope and fired some astounding sub-MOA groups with 55-grain Nosler Ballistic Tip bullets. Don’t forget the modularity and versatility of the AR platform. Yes, you might be buying a gun for home defense, but it can be employed in other ways.

One thing you have to remember when it comes to these compact firearms is that they were not chambered for the .223 Remington/5.56mm NATO. With the Meopta 1-6x24mm MeoStar R2 scope attached, the Protector Carbine weighed 8 pounds. The Protector Pistol weighed just a shade short of 6 pounds with the miniature MeoSight III.

In the carbine and pistol, the .300 HAM’R generates about 6.3 and 7.6 foot-pounds of recoil, respectively. By any measure, this isn’t much recoil. However, when you consider that a comparable 5.56mm AR will produce about 37-percent less recoil, this bears mentioning.

If you’re trying to hammer a target hard and fast, you’ll have to shoot more slowly with the .300 HAM’R. Granted, not much more slowly, but if you want to get hits, your rate of fire will be reduced—based on my shooting and testing—by about 25 percent. Though this is noteworthy, I’m not sure how much it really matters. With the Protector Pistol, I was still able to pound five shots into an IPSC target at 25 yards in less than three seconds.

When you consider that you’re depositing over 25-percent more energy with each hit than you would with a .223 Remington, I’d say that the reduced rate of accurate fire is inconsequential in the overall scheme of things. Yes, you can feel the .300 HAM’R a bit more than the 5.56mm NATO, but it’s still very comfortable to shoot.

I ran both guns through a variety of tactical-style drills and fired almost 250 rounds of ammunition. There were no stoppages with either gun, and they both handled smoothly. With the MeoStar scope on the Protector Carbine, snap shots at spitting distance and even out to 100 yards on torso-sized targets were crisp and quick. The Protector Pistol performed identically with the little MeoSight III but was noticeably nimbler and is better suited to indoor use, where space is limited.

If I were looking for a straight-up home-defense gun, I’d lean toward the Wilson Combat Protector Pistol. It is ultra-compact, accurate and comfortable to shoot. Chambered for the .300 HAM’R, it’ll also put the smackdown on bad guys.

Of course, one thing you’d need to keep in mind is noise. Inside a home, the blast from the 11.3-inch barrel will be ear-splitting. Fortunately, you could attach a sound suppressor without giving up the pistol’s compactness. For what it’s worth, I showed this gun to a buddy works in law enforcement, and I could immediately see his mind figuring out how he was going to get a suppressed version in his patrol car.

Given my lifestyle and the fact that I live out in the country, the Protector Carbine would probably be the better choice for my purposes. I have a fenced yard with a dog that’ll make you think twice about coming through the gate. I’d hedge my bets that if I need personal protection at home, it’ll most likely occur outside, instead of inside.

Also, with the Protector Carbine, I’d have a gun that could serve a multitude of uses during hunting season. The .300 HAM’R is every bit as capable as the .30-30 Winchester , and in West Virginia, the .30-30 Winchester will do anything I might need it to do. As a side note, I’d hold onto the .223 upper as well. There’s no substitute for versatility.

Your needs may vary, and I can even see an argument for having both. You could keep the Protector Pistol beside the bed and the Protector Carbine behind the kitchen door. Both could be accessible, depending on the pressing need, and you and your wife could both be well armed at the same time. She knows to handle an AR, right?

This article was originally published in the Personal Defense World April/May 2020 issue. Subscription is available in print and digital editions at OutdoorGroupStore.com. Or call 1-800-284-5668, or email subscriptions@athlonmediagroup.com.